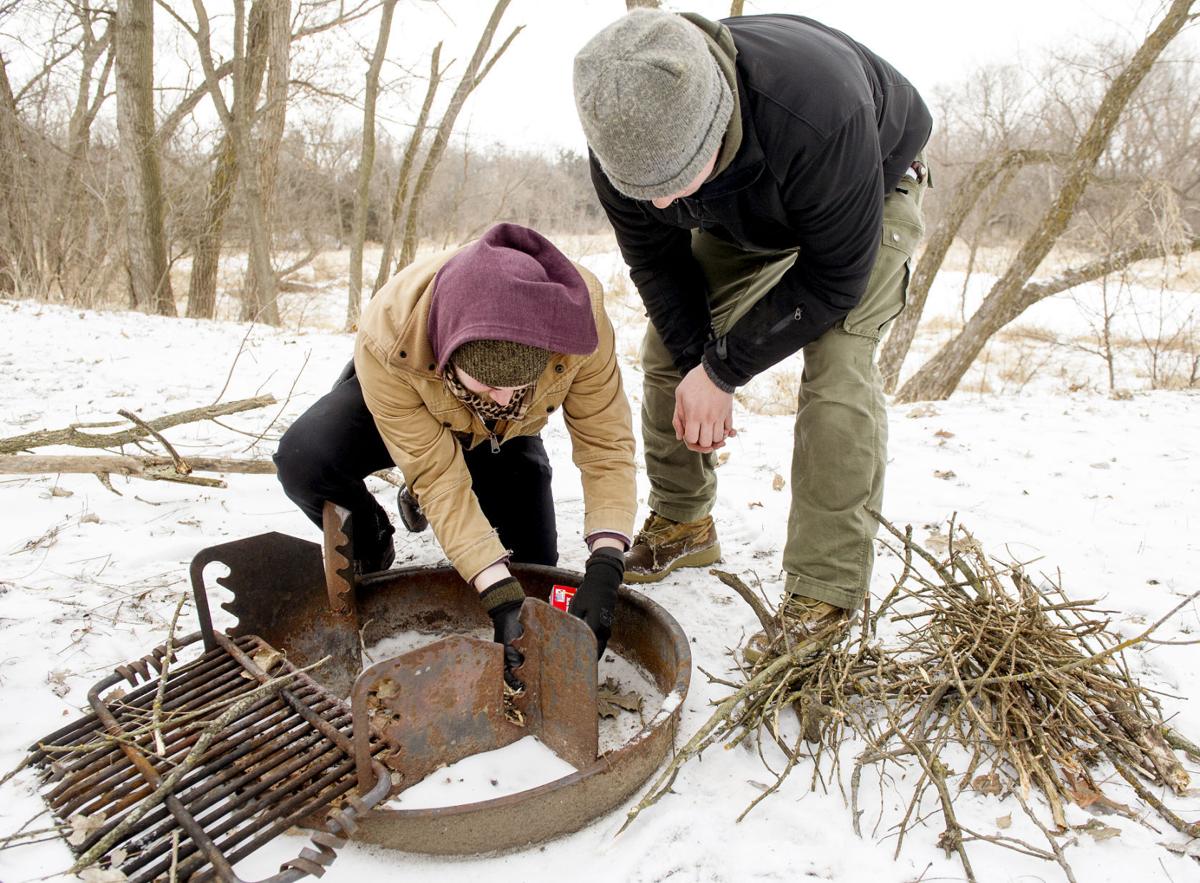 Alex Russell (left) and Sam Larson strike a match to light kindling they found during a hike on Jan. 23. Larson taught four different methods for lighting fire in emergency situations. 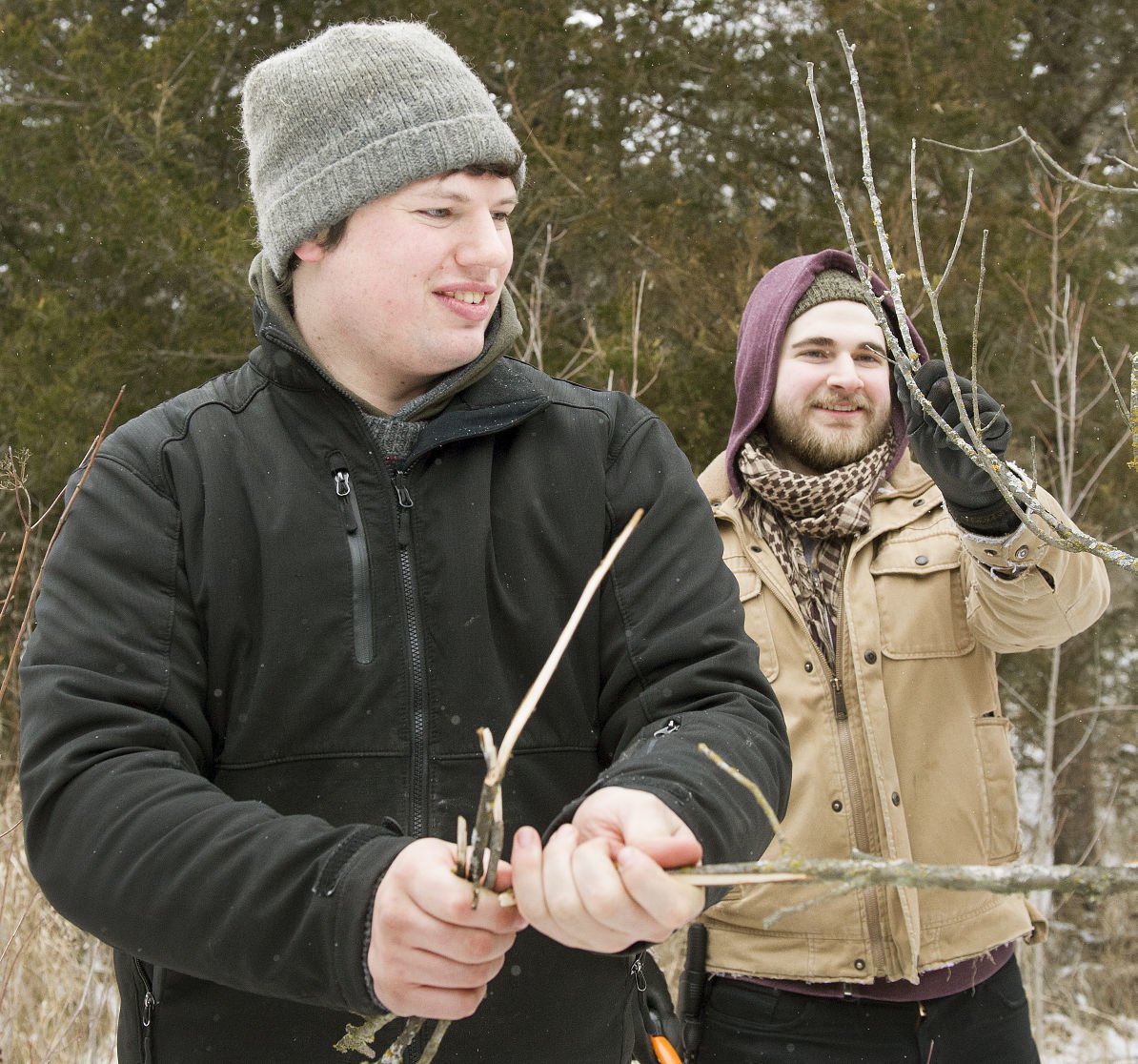 In this 2016 file photo, Sam Larson (left) and Alex Russell of Lincoln forage for dry twigs for kindling near Pawnee Lake during a survivalist class. 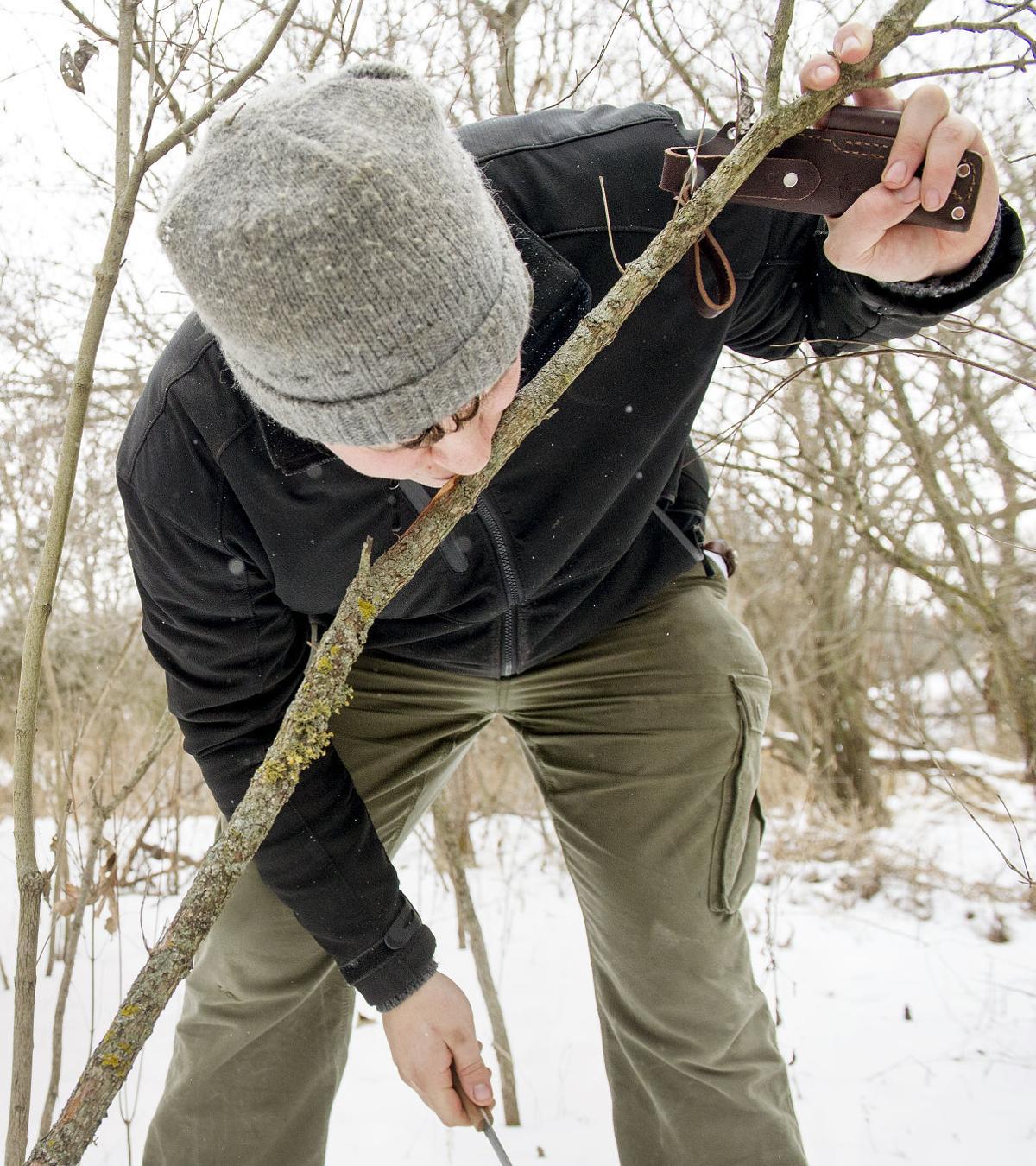 After scraping away surface bark with his knife, Sam Larson applies his lips to a maple sapling to see how dry the wood is.

Teaching survival skills and leading excursions was on Sam Larson’s to-do list long before a TV producer took notice of his blog a few years back.

He wanted to know if the author of Woodsong Wilderness wanted to audition for a new reality show.

He did, and one of the steps in the audition process was to jump in a lake at 6 a.m. with his clothes on, get out and light a fire that would warm him and dry his gear. Oh, and anything he used to ignite the fire had to be on him when he took the morning plunge.

Larson, 23, had been preparing for this for years, although not with a starring television role in mind.

“He has always preferred the outdoors,” said his mom, Leisa Larson. “Ever since he was little, he wanted to go outside and do everything, even some things I would have preferred him to do indoors.”

Using the back of his knife against a magnesium rod to spark an ember, her boy aced the jump-in-a-lake-then-start-a-fire test, and the rest of the audition process for History's breakout hit about true survivalists, "Alone."

About five months have passed since the final episode revealed that Larson, after a night spent under a tarp getting battered by rain in remote British Columbia, was ready to come home to his then-pregnant wife, Sydney. He'd spent 55 days in the wilderness.

On Jan. 23, Larson drove his Chevy pickup out west of Pawnee Lake. It had a pile of bargain-bin planks from Lowe’s in the back and an empty child seat up front.

Now that “Alone” is in his rear view, Larson is looking to teach Nebraskans some of the skills that got him on the show in the first place. He wanted to start with something elemental, something absolutely necessary to survival in the outdoors. He began with fire.

“It’s something that I’ve got a really, really good grasp on, just learning how to make a fire in any circumstance,” he said. “I guess I learned the majority of that in Maine. It’s one of the more wet places in the northern U.S. Vancouver was a step wetter than that.”

The temperature was supposed to reach the 40s on the day of the lesson, but it started frigid and just got colder. By noon, the wind chill was 10 degrees. Larson layered up and shrugged it off. Most of those who were supposed to join him, however, did not.

Several potential survivalists called to postpone because it was too cold. That left Alex Russell, Larson and me (more on that at JournalStar.com) to learn how to collect materials to build emergency and friction fires.

Russell, 24, and Larson went to school together at Lincoln High, although they were in different grades and knew of each other as opposed to really knowing each other. Russell remembers Larson being on the basketball team, for instance, but he had no clue Larson did any outdoorsy stuff until a mutual Facebook friend -- Sydney Larson -- posted that her husband was going to be on a TV show that dropped him off in the woods with a set of cameras, a minimal amount of gear and nothing else.

Russell said he and his girlfriend, Sarah Frankel, watched “Alone” from start to finish. He had an emotional interest in seeing a guy he knew do well, he said, and it also aligned with his growing interest in bushcrafting.

At this point, it’s probably accurate to call it the bushcraft industry, said Tim Smith, the "honcho" at the Jack Mountain Bushcraft School in northern Maine. Larson headed there right after high school, joining mostly 20-somethings and ex-military members who wanted to learn to survive off the land.

It’s a natural response to the urbanization and modernization of our culture, Smith said.

“Ultimately, we’re all seeking that balance,” he said.

Some who go to Jack Mountain want to leave with a valuable skill set, Smith said. Others want to leave and go do it. Three people from his last class of 14 are living in canvas tents this winter and setting traps to catch their dinners.

Larson falls in the Go Do It category. He’s camped for extended periods in the northeast, southwest and, of course, for 55 days in Canada during "Alone."

Russell grew up in a camping family, and camps with friends regularly. While he said he’s interested in potentially camping and foraging alone for short periods of time, mainly “it’s more about not bringing a ton of crap with me.” But learning about self-sufficiency in nature is a draw for him.

“It’s kind of feeling like it’s a lost curriculum,” Russell said. “We’ve been so detached, and haven’t needed some of these skills to survive. It's interesting to me.”

For Christmas, Frankel bought him the day-long lesson with Larson and a 7-inch knife. He brought it and a smaller blade with him for the fire-starting lesson.

“What’s the best way to identify a dead tree in winter when they all look dead?” Russell asked as they looked for kindling.

In answer, Larson took out a knife and sliced a layer of bark off a maple sapling. He placed his mouth over the area he’d cut open, describing it as "touching lips" with the tree.

“That’s when you’re a tree kisser, not a tree hugger,” he said, and a dry kiss leads to good kindling.

Although it was Larson's first time leading a class aimed at adults since appearing on "Alone," this isn’t his  first experience teaching survival skills. After his first summer as a student in Maine, Smith invited Larson back as a teaching assistant the next year.

Smith said the then-teenager arrived in Maine with a wealth of knowledge about the outdoors, but that only goes so far when you spend weeks on end in the elements.

"We're together 24-7 when we're in the field," Smith said. "You get a pretty good read on people when the bugs are bad."

After a month in the Maine wilderness, when they were ready to return to civilization, Larson pulled up the sleeves on his shirt.

And yet, he couldn’t recall as much as one complaint from Larson during the weeks the bugs feasted upon him.

Larson said he got that from his dad, and also from Smith.

“It’s better to be positive than to try and make yourself look cool,” Larson said. “Humor is better than looking tough.”

The way he conducts himself in the elements was not lost on Russell either. One of his favorite scenes of "Alone" took place during the first episode, when a wolf howls in the proximity of the contestants’ various campsites. They cut to several of the survivalists staring into the distance.

“Then it cuts to Sam, and he’s just howling back at them,” Russell said. “I really admired that.”

On the walk back from the trail where they collected kindling, Russell asked Larson what he ate most out in the Canadian wilderness.

“Roast them and eat them like potato chips, basically," Larson said. "They’re small ones. Yeah (the show) spent all the time on the mice, because -- hello? TV -- you know. That was the most delicious, so I was probably more theatrical."

Larson looked down at the trail. When he’d come out in the morning to look for good kindling sources, his boots, some dog paws and a set of cross-country skis were the only things that had left tracks in the snow. Now, it looked as though the trail had been heavily traversed.

“It gets to the point where, if you’re (in the woods) every single day, it’s crazy, because you just learn every single tree,” he said.

When a new set of prints shows up or a branch falls down, it’s big news, he said.

Back at camp at Pawnee Lake, Larson stacked the kindling and tucked a cotton ball coated in a glob of Vaseline beneath it. He gave Russell a match. Then, fire.

"You know, when it's easy like that it's not the same," Larson said as he warmed his boots. "As it gets progressively more and more difficult, it gets more and more rewarding."

To see the full list of Larson's classes, which include everything from canoe paddle carving to wild foraging and take place no more than a few hours from Lincoln, and to read more about his experiences on the show and in nature, go to woodsongwilderness.com.

Journal Star stories that inspired us in 2016

From animal rescues to selfless giving to preserving long thought lost pieces of Nebraska history, here are the stories that inspired and lift…

After spending 55 days by himself in the Maine wilderness as part of the History Channel's series on survivalists, "Alone," Sam Larson is teac…

I am so, so happy that Francis Gardler, the photographer who joined me out west of Pawnee Lake, had gone to another assignment before my day s…

Lincoln's Sam Larson after 'Alone' win: 'It kind of felt like 'The Walking Dead,' all these people coming toward me.'

The crowd at the Railyard grew quiet at the end of Thursday night's finale of the History Channel's survivor series "Alone."

Alex Russell (left) and Sam Larson strike a match to light kindling they found during a hike on Jan. 23. Larson taught four different methods for lighting fire in emergency situations.

In this 2016 file photo, Sam Larson (left) and Alex Russell of Lincoln forage for dry twigs for kindling near Pawnee Lake during a survivalist class.

After scraping away surface bark with his knife, Sam Larson applies his lips to a maple sapling to see how dry the wood is.