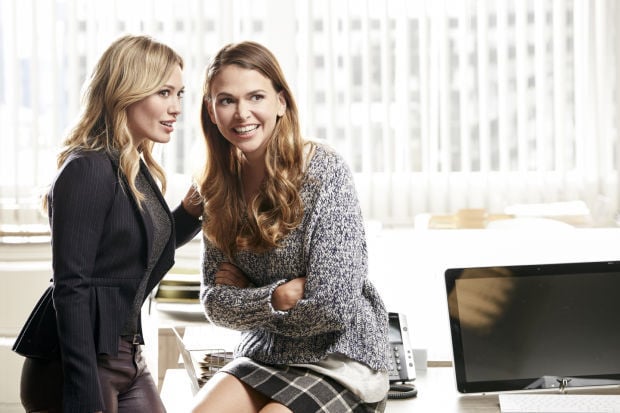 Hilary Duff (left) and Sutton Foster star in "Younger," a comedy featuring Foster as 40-year-old pretending to be 25 to land a job. 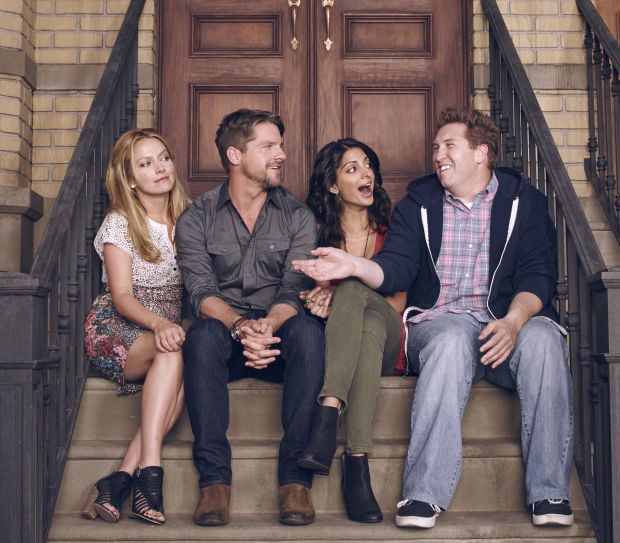 Two new comedies -- “Younger” and “Weird Loners” -- make their debuts this week, with both, coincidentally, using age as a theme. Here’s a short rundown of each:

* “Younger,” 9 p.m. Tuesday, TV Land. From “Sex and the City” creator Darren Star comes this pretty darn entertaining comedy starring Sutton Foster (“Bunheads”) as a 40-year-old, soon-to-be-divorced mother who pretends to be 25 in order to get a job at a publishing firm.

The supporting cast includes veteran TV actress Debi Mazar as the best friend, Miriam Shor as the overbearing boss, Nico Tortorella as the much younger boyfriend and former Disney Channel star Hilary Duff as the co-worker.

For those of us 40 and older, it’s a bit of a hoot watching Foster navigate these waters, from learning how to use Twitter to deciphering texts IRL (in real life) to explaining away those crow’s feet, among other things that aren’t mentionable in a family newspaper.

But it’s the personal relationships -- with the hunky Tortorella and with Duff -- that hold the most interest here, especially with Duff, who is the woman now that Foster used to be. You can’t help but wonder how all this is going to play out. Grade: B+

* “Weird Loners,” 8:30 p.m. Tuesday, Fox. Incredibly quirky is the best way to describe this comedy from “The King of Queens” co-creator Michael Weithorn.

It stars Becki Newton (“Ugly Betty”), Zachary Knighton (“Happy Endings”), Meera Rohit Kumbhani and Nate Torrence as four 30-somethings who are unable to maintain long-term romantic relationships. This, of course, brings them together in myriad ways, including the crashing of a wedding in the pilot.

Newton and Knighton are comedy pros, so their kooky performances are expected. Torrence always plays a goofball. The real find here is Kumbhani, a newcomer who holds her own with the others. “Loners” is goofy -- the same way Knighton’s “Happy Endings” was -- and that’s what makes it so fun. Grade: B

* “Killing Jesus,” 7 tonight (March 29), National Geographic Channel. The cable network is turning to authors Bill O’Reilly and Martin Dugard and Scott Free Productions (“The Good Wife”) again after enjoying super-sized ratings with “Killing Kennedy” and “Killing Lincoln.” This one tells the story of how Jesus' message and preachings led to his persecution and execution.

* “The Dovekeepers,” 8 p.m. Tuesday and Wednesday, CBS. From Mark Burnett and Roma Downey, who brought “The Bible” to History, this four-hour historical drama stars Cote de Pablo (Ziva from “NCIS”), Rachel Brosnahan and Kathryn Prescott in the title roles. Considering the success of “The Bible” and de Pablo’s huge fan base, I expect this to be a ratings monster for CBS.

* The sixth season of “Downton Abbey,” arguably PBS’ most successful series ever, will be its last, according to multiple reports. The drama will return stateside with its final set of episodes in January.

* It’s official: “The X-Files” return is happening. Fox will air a six-episode special event this summer, with dates yet to be determined. David Duchovny and Gillian Anderson will reprise their roles as Fox Mulder and Dana Scully, respectively.

* Emmy winners Damian Lewis (“Homeland”) and Paul Giamatti (“John Adams”) will star in “Billions,” which Showtime recently ordered to series. The drama will be set in the “New York world of high finance.”

Hilary Duff (left) and Sutton Foster star in "Younger," a comedy featuring Foster as 40-year-old pretending to be 25 to land a job.