Buying a new home is a major life event. So, making such an important decision in front of a national television audience only elevates the stakes.

However, Kirstie Thomas was up to the challenge when she filmed an episode of "House Hunters" that will air on HGTV at 9 p.m. Wednesday. A Clarinda native, Thomas now lives in Omaha.

Over the course of the episode, viewers will follow Thomas, along with her boyfriend Kyle Kinman, as they view three potential homes in Omaha. The episode will conclude with the reveal of which house she chose.

Filming for the episode was completed in March, and Thomas has since moved into the new home. "I love it," she said.

What makes Thomas' story stand out from many of the other home buyers featured on the popular program is the fact that she is also a real estate agent. She is licensed in both Nebraska, working with eXp Realty of Omaha, and Iowa, where she works with Thomas Realty, which is owned by her father, Chuck Thomas of Clarinda.

"They had been in contact with me in the past as an agent. So, when I started my own house search, I reached out to them with the idea I could be both the Realtor and the buyer. They kind of liked that idea," Thomas said.

Thomas pitched the idea for the episode to officials with HGTV in early January and learned she had been selected for the show in February.

"I was super excited. I called everyone I could to let them know. But the first call I made was to my dad, because he is also a real estate agent and was the one who got me involved in real estate. So that was a super exciting moment for both of us," Thomas said.

"My daughter spearheaded the whole thing. She put out some feelers and lo and behold the producers got ahold of us and said they would be interested. It just kind of escalated from there," Chuck Thomas said. "I was a little reluctant to do it at first, but my family wanted me to do it. I was excited for them and excited we could show off Clarinda to a national audience."

Chuck said the opening scenes of the episode take place in the living room of his mother, Shirley Thomas of Clarinda, as Kirstie speaks to her boyfriend; grandmother; brother, Korbin Thomas, who also works for Thomas Realty; and Chuck about her upcoming house search. Kirstie said there is also scenic footage of Clarinda in the episode.

"This was the first time they have ever been to Southwest Iowa," Kirstie said. "It meant a lot to have them drive to Clarinda and comment on how awesome the area was. It meant a lot to me to share this experience with my family, and I wanted the town I grew up in included."

"I thought it was interesting a national television program would have interest in look at a small town like Clarinda," Chuck said. "It was nice we could showcase our hometown on national TV and Thomas Realty on national TV. We have worked hard over the years, so this was a little bit of a reward to learn people like seeing stories about the Midwest and small towns like Clarinda."

The episode shifts to Omaha as Kirstie, with the aid of her family members, starts her house hunt. She said the filming was completed over the course of five days as a camera crew followed them on their tour of the potential homes.

"It was really cool, but definitely a learning experience as well. It was a whirlwind of a week as they filmed from 10 a.m. to 6 p.m. or 7 p.m. to take advantage of the daytime hours. It was crazy how many different scenes we did within that week to go into a 25-minute episode. It was a surreal and unique experience," Kirstie said.

Chuck said he enjoyed going through the different houses and hearing Kirstie and her boyfriend discuss the qualities of the properties.

"My daughter is chattier than I am, so she did most of the talking," Chuck said.

With a handheld screen, Kirstie said, she had the opportunity to view scenes right after they were filmed with her family.

"That was cool. But the best part about being on national TV was sharing that experience with my family and having them there with me," Kirstie said.

Cities with the fastest-growing home prices in Iowa

Cities with the fastest-growing home prices in Iowa

He was best known for his role as helicopter pilot Theodore "TC" Calvin on the 1980s hit show "Magnum, P.I.," starring alongside Tom Selleck.

Disney+ is getting more expensive ... unless you want ads

Its price is jumping 38 percent.

Martha Plimpton heard her old boss Greg Garcia was looking for a “Martha Plimpton type” for his new comedy and, frankly, was upset she wasn’t called.

TV shows based on podcasts, ranked from worst to first

From "Dirty John" to "The Dropout," here's a look at the best TV shows that are based on podcasts, according to IMDb.

REVIEW: It's a new game for 'League of Their Own'

Television’s “A League of Their Own” starts a bit like the 1992 film about the world of women’s professional baseball. Then, it throws a curve ball.

The 50 best reality TV shows ever, according to IMDb

Using data from IMDb, here's a look at the 50 highest-rated reality TV shows of all time.

REVIEW: 'The Bear' may be the one show you need to see

Like an ‘80s drama on NBC, “The Bear” makes everything count. The cast – filled with many flavors – makes it immensely relatable. It is, for lack of a better comparison, the one show Steven Bochco might have wished he had created.

A tense finale of the space-race drama "For All Mankind" leads a busy Friday for Apple TV+, including the season finale of the Maya Rudolph comedy "Loot" and the Hurricane Katrina docudrama "Five Days at Memorial."

Travis Barker is already back on stage against doctor’s orders 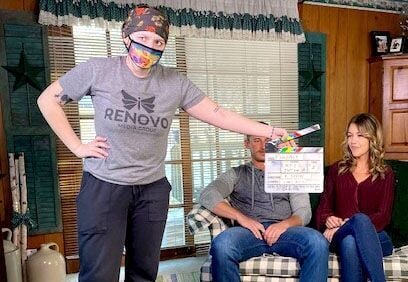 Lights, camera, action – Kirstie Thomas, right, and her boyfriend, Kyle Kinman, prepare to film a scene for the HGTV show “House Hunters.” Thomas, a native of Clarinda now living in Omaha, Neb., will be featured in an episode of the program that will air at 9 p.m. CST Wednesday, Aug. 10. Thomas is not only the buyer, but the realtor for the episode. She works for eXp Realty in Omaha, Neb., as well as with her father, Chuck Thomas, at Thomas Realty in Clarinda. Some of the episode will take place in Clarinda before shifting to Omaha. 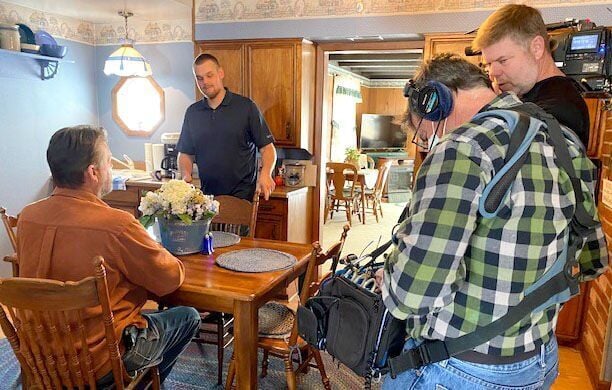 HGTV crew members, at right, prepare for the filming of a scene of “House Hunters” that included, seated, Chuck Thomas of Clarinda. During the episode, Chuck Thomas helps his daughter, Kirstie Thomas, with her search for a new home in Omaha, Neb. Filming for the episode was completed over a span of five days in March.