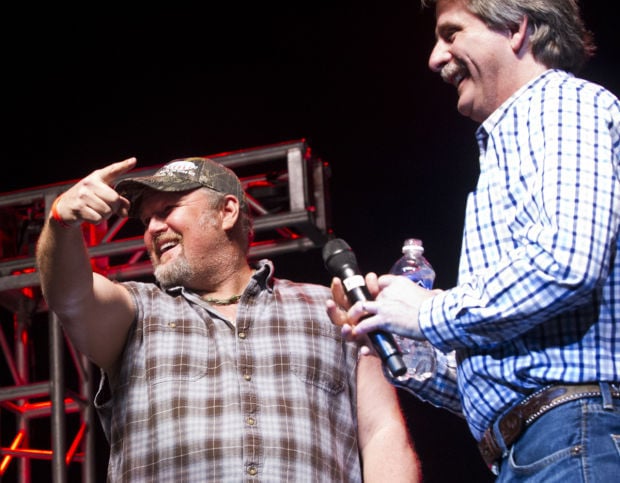 Larry the Cable Guy (left) points to his surprise opening act, comedian Jeff Foxworthy, for a benefit for the Team Jack Foundation in 2014 at Pinnacle Bank Arena. The duo will be back together Friday for another PBA performance. 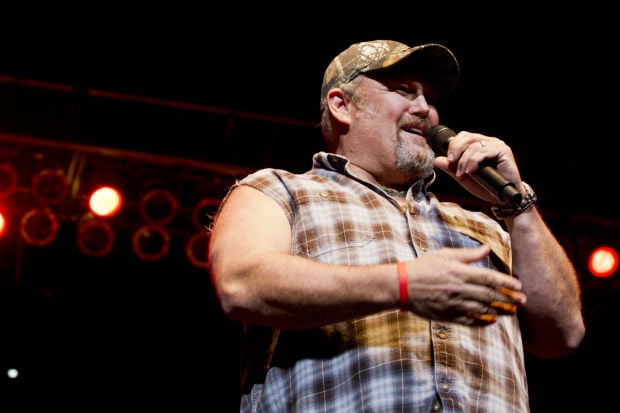 Larry the Cable Guy is as comfortable onstage as he is courtside for Nebraska basketball games at Pinnacle Bank Arena. He'll perform his kind of Blue Collar comedy with Jeff Foxworthy Friday at the arena. 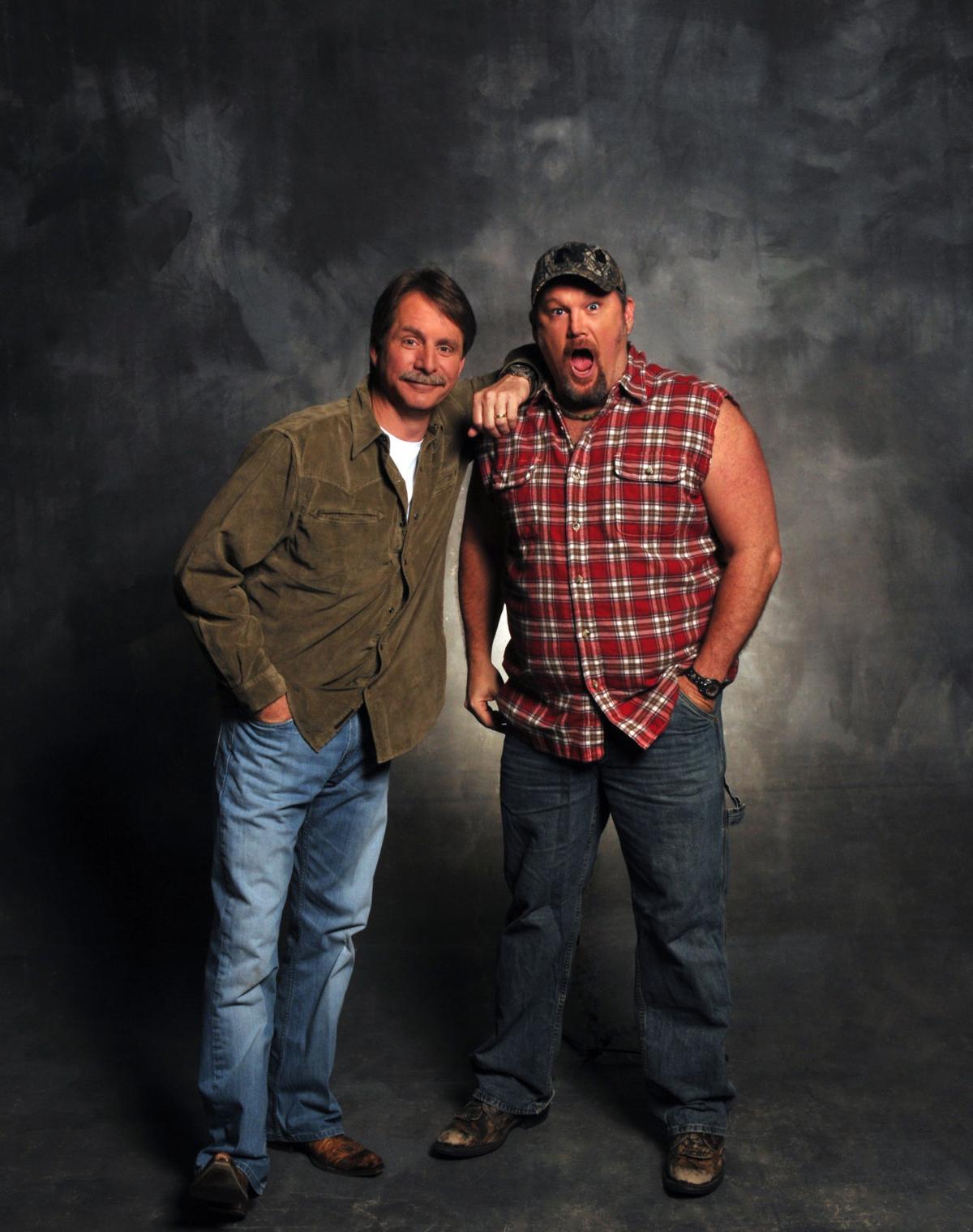 At Pinnacle Bank Arena, you’re likely to see Dan Whitney sitting courtside at Nebraska basketball games, unless you’re there to see him headlining the place, as he will on Friday with his longtime bud Jeff Foxworthy on the “We’ve Been Thinking” tour. But one thing you will never, ever see Whitney, aka Larry the Cable Guy, do again -- arm wrestle.

During Nebraska's 2016 football season, the Pawnee City-raised star who made his name on the Blue Collar Comedy Tours invited six members of the Nebraska National Guard to join him in his skybox for each game. It’s one of the many ways that Whitney, who on Wednesday donned a penguin outfit at the Lincoln Children’s Zoo expansion announcement, gives back to the community.

At last fall's Nebraska-Illinois game, one of the six Guard members who attended asked Whitney a new one.

“So this guy comes up to me, and he says, 'Hey, listen, I got a weird request,'” Whitney said in a phone interview to promote Friday's show. “I said ‘What is it?’” He said: ‘Can I arm wrestle you and videotape it so I can show my dad? He'll get a kick out of it.' And I said, ‘Yes, sure.’ And I'm thinking, this guy's gonna kill me. He's a freaking Army guy.”

Those who saw the video of the match after it was viewed millions of times online know that this is not what happened. At all.

“I remember it vividly, enough to never arm wrestle again,” Whitney said, recounting the bout that was supposed to be a goof but instead broke John O'Connell’s left arm. “Because I can't handle what happened.”

After asking Whitney’s permission -- “I said, ‘Dude, I don’t care what you do; it’s your arm,” Whitney said -- O’Connell provided the clip to TMZ, which aired it with a police tape-looking label across the bottom of it -- “Warning: Horrendously Grotesque.”

Whitney, when asked about it by the Journal Star, kept the description comparably tame to the video. And the story wasn’t all bad. It ends with the faux adversaries becoming real gameday friends.

And, Whitney said, “It gave me some tough guy street cred.”

Here’s the rest of that story, as well as some other recent Larry the Cable Guy tales as told by Whitney:

Dan Whitney: He came over, and I'm like, "I'm left-handed; I don't know how you want to do it." Hey, pick an arm. And the guy's a beast. (Laughs). He was shorter than I was and he weighed less than I did, but I mean that guy had half an ounce of body fat on him. You know, had softballs for arms.

So, we start arm wrestling. I thought I was doing good. But I was looking at his eyes and I was thinking that this guy can take me down at any second, you know, playing with me. And I was trying to be funny for the camera. “All right, you're about to see the power of the Cable Guy.” You know, something like that.

You know how you always just had that -- if you arm wrestled you always had that one final spurt and that's about it for you? And on that spurt, I did this little jerk-move with my hand -- it was all legal; I didn't do anything illegal! And all of a sudden, you hear, throughout the entire suite box “pop!” His arm just collapsed. And not only did I hear it, I felt it vibrating through my arm.

And I was just like: “Oh dude. Did I just break ... Is your arm broken?" I'm freaking out. Fortunately my buddy, Dr. Rhodes, Rob Rhodes, is in there. He came over, and he was like, "Ooh. Lay down." And the poor guy, man, he's white as a ghost. But the funny thing for him was -- he's so excited about his experience in this awesome suite box. He comes in, Larry the Cable Guy breaks his arm arm wrestling. And Mike Rozier is getting him ice packs! And Tony Davis came in and said, "What happened?"

He got to come up for the last three home games. I still keep in touch with him. It was a true accident. And he's the one who wanted to arm wrestle, not me!

But he's a really nice kid and I keep in touch with him, and I'm sure I'll invite him to a few more games this year, too. He's like one of the crew now. Everybody remembers it. Now he's gotta be part of the gang. (Laughs.) It was definitely the craziest thing. That ended it for me. I can't even watch people arm wrestle anymore because it freaks me out.

Ground Zero: While I was waiting for this phone call, I was watching a bit of the (Comedy Central roast of Larry the Cable Guy), and I was watching Greg Giraldo's part. He started that thing off the way he knew how to do it.

Here's the thing about Greg Giraldo. Greg Giraldo means a lot of his roasts. He's up there venting. Greg Giraldo came up to me after the roast and said he hoped that I wasn't offended or mad. He said that he respects what I do, and he said -- this is exactly what he said -- he goes: "Look, I know I get upset up there but ... I'm gonna be honest with you Dan, I'm not mad at you at all. I am very happy for your success. When I vent, I am more mad at myself than I am anybody else because I just feel like I could be in your position and I'm not. And the reason I'm not is because I (messed) around too much. I have vices."

He pretty much bared his soul to me. And I told him, “Dude, it was funny. It's a roast. I'm not mad at you. You're completely fine.” But he kind of felt bad, I think. (Laughs.)

GZ: I haven't seen the “Madea” films. But they’ve always interested me because Tyler Perry is such a workhorse about them. Had you watched any of them before Tyler called and asked you to be in one? (Larry the Cable Guy is in 2013’s “A Madea Christmas.”)

DW: No, I know Tyler. Tyler's a buddy, but (I'd) only seen Tyler do Madea in clips, YouTube clips. So that's the only time I saw that. But I'd just finished filming a movie myself. I was up in Vancouver, doing “Jingle all the Way 2.” Fox Home Video, they have a library of all these movies, and they always want to do low-budget remakes, and I'm the guy that does the low-budget remakes because it's fun. I enjoy it. By the way, when I was promoting “Jingle all the Way 2,” I said, “This movie picks up where the last movie left off -- on the DVD aisle.” (Laughs.)

Anyway, so I get home, and Tyler calls me out of the blue.

He goes, "Shut up and listen. Larry the Cable Guy. Madea. Christmas movie. Can't miss. You in?"

And I go, “Man Tyler, I literally just got home from Vancouver filming a movie. I would love to do it but how long am I gonna have to be gone.”

“You know what? I do movies fast because I've got so many other projects. A week at the most. A week."

GZ: What made you want to say "yes" right off the bat?

And No. 2, I like Tyler. We both kind of have the same type of story, as far as, when Blue Collar got together, nobody thought it would work. Hollywood didn't like it. It's not gonna work. Nobody wants this. And same with Tyler. This is stupid. Nobody wants to watch you dress up like a woman.

And he does good things with it. He tries to help improve his community. And that's what we Blue Collar guys do as well. It was just a good fit. I really like Tyler. I would have done it for even less than he offered me. Great experience.

And not only that, Tyler takes that money, and he dumps it back into Atlanta. He dumps it back into the studio. He hires local. And that is a really cool thing. And I'd be doing the same thing if I had a studio in Lincoln. Unfortunately, I don't have Madea money. (Laughs.) I have "Health Inspector." It did good, but it didn't do Madea numbers. Made good money, but it didn't do Madea numbers.

What: "We've Been Thinking" tour, starring Larry the Cable Guy and Jeff Foxworthy

The 2021 Emmy Awards were a night of firsts and surprises

10 things to know about Larry the Cable Guy

Before the Larry the Cable Guy/Jeff Foxworthy show tonight, here are 10 things to know about Larry and his real-life counterpart.

Now that comedian John Mulaney’s run on Broadway with his buddy Nick Kroll has concluded, he will bring his latest standup set to the Rococo Theatre.

Comedy Central mainstay Daniel Tosh announced on his website that he’s going on a campus tour this spring, and it looks like that tour is gett…

Larry the Cable Guy (left) points to his surprise opening act, comedian Jeff Foxworthy, for a benefit for the Team Jack Foundation in 2014 at Pinnacle Bank Arena. The duo will be back together Friday for another PBA performance.

Larry the Cable Guy is as comfortable onstage as he is courtside for Nebraska basketball games at Pinnacle Bank Arena. He'll perform his kind of Blue Collar comedy with Jeff Foxworthy Friday at the arena.