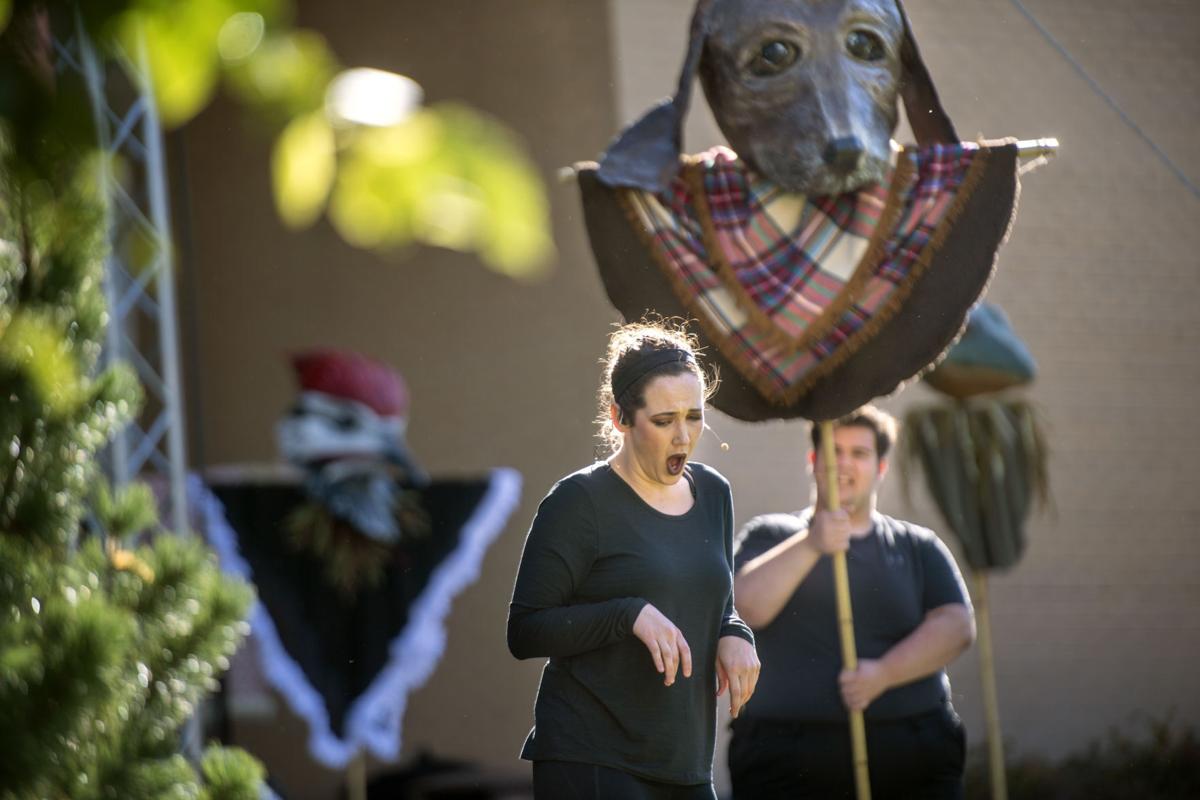 Olivia Hacker (left) and Connor Husa perform during a rehearsal of "The Cunning Little Vixen" outside Kimball Hall at the University of Nebraska-Lincoln City Campus on Wednesday. The UNL opera department will present the show this weekend. 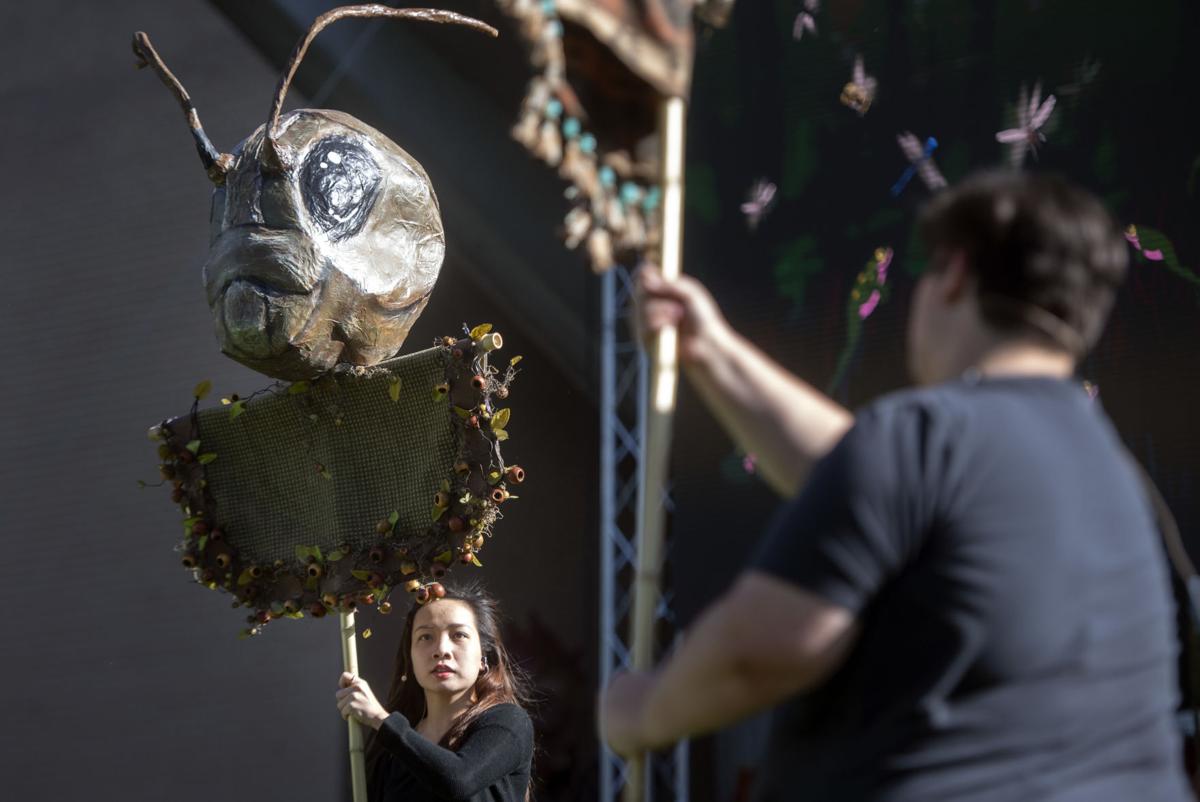 Anh Le holds a puppet during a rehearsal of "The Cunning Little Vixen" outside Kimball Hall on Wednesday. 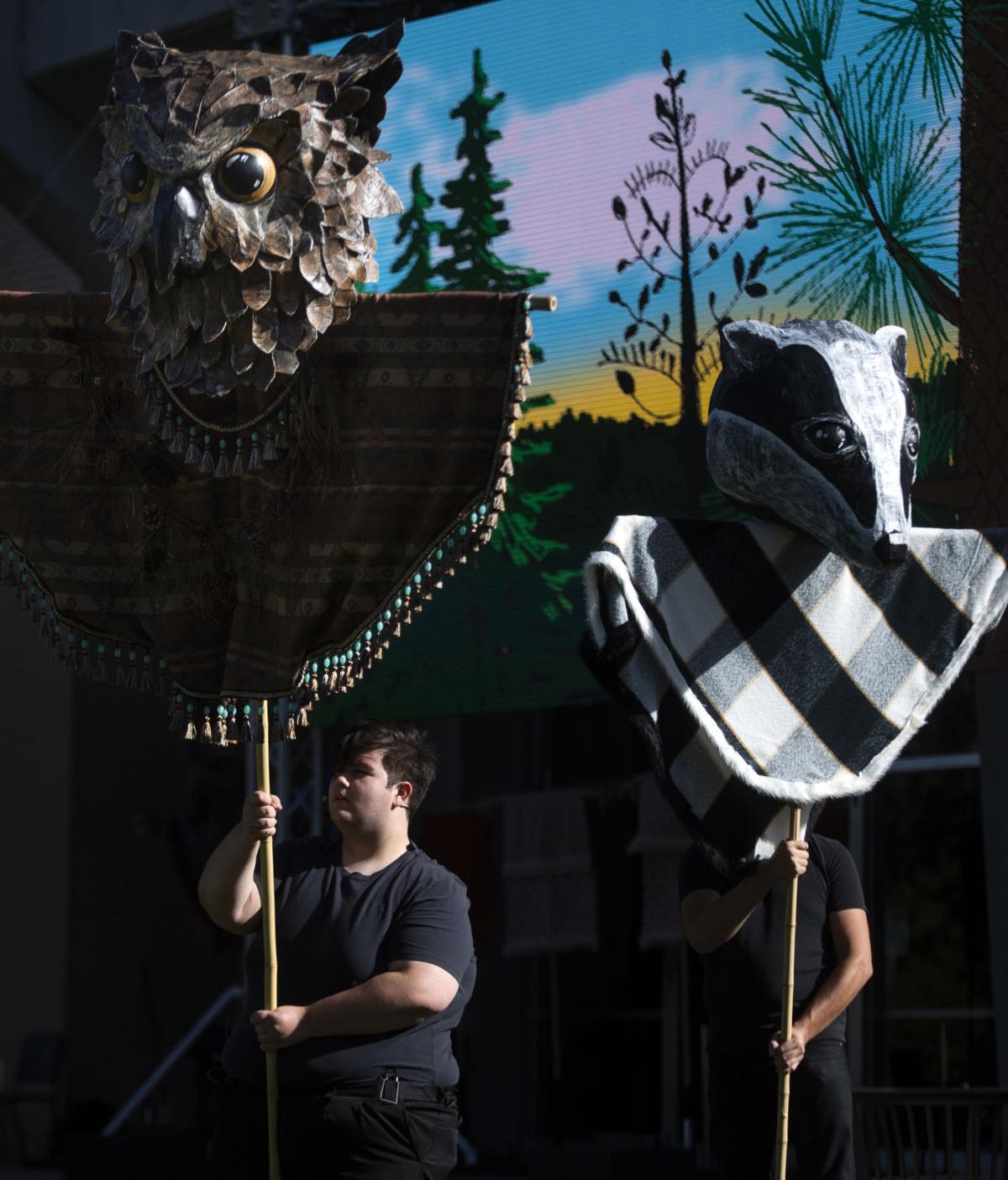 Connor Husa (left) holds a puppet during a rehearsal of "The Cunning Little Vixen" outside Kimball Hall on Wednesday.

Presented with a quandary, Bill Shomos found a solution — albeit until the weather forces the University of Nebraska-Lincoln opera department back indoors.

UNL's director of opera recognized early on in the pandemic the aerosol issues with the coronavirus that singers would have to encounter.

For the sake of his students, he also had to find a way to get them back on stage. However, doing so in a stuffy auditorium was not going to happen anytime soon.

"I finally figured, 'What the heck -- let's take it outside,'" Shomos said.

The UNL campus is blessed with a number of suitable outdoor venues, none better than the patio outside Kimball Recital Hall, which in normal times, hosts the annual Jazz in June festival.

On Saturday and Sunday, Shomos will present Leos Janacek’s “The Cunning Little Vixen” at 5 p.m. on that stage. The show will also be livestreamed Friday at 5 p.m.

He assures those wishing to attend that with performers fully amplified, they'll be able to see and hear the opera from anywhere on the lawn of the arts quad.

"I hope people will look forward to bringing blankets and lawn chairs to enjoy the opera from any vantage point they like," he said.

There will be no charge for the 90-minute opera, which will be sung in English with projected supertitles.

A large projection screen will help tell the story through a series of illustrations designed by Johnny Carson School of Theatre and Film alum David Tousley.

In addition, puppetry for the many animal characters has been created by Nebraska Repertory Theatre Artistic Director Andy Park and Johnny Carson School of Theatre and Film alum Jill Hibbard.

“The Cunning Little Vixen” is a story of the cyclical nature of life, featuring a forester, his family, a rescued vixen fox cub and other creatures of the forest.

“It’s a story about life, love and rebirth,” said Karin Berg, an undergraduate voice major who is playing the role of the forester’s wife, in a written statement. “It is a lively, fun and meaningful story that I think we can all enjoy and relate to.”

Olivia Hacker, a first-year graduate student who is playing the vixen, said the outdoor experience enhances the story and performance.

“Honestly, this work almost begs to be presented outdoors,” Hacker said in a written statement. “I think we’re all able to explore the story better due to the outdoor space, in that, nature is automatically included as the narrative sphere.”

Admission to the show is free, and the audience is urged to bring blankets or lawn chairs.

When: 5 p.m. Saturday and Sunday. The production will be livestreamed Friday at go.unl.edu/cunninglittlevixen.

Dining Out: When Fruity Pebbles meets chicken wings, the results are UnbeWingable

The restaurant originated from Sunday family dinners that often included friends, with everyone bringing a meal and sometimes featured wing tastings.”

It has happened with a distinctive mix of sounds -- Bangle-esque harmonies and some pop hooks here, indie rock jangle and Midwestern punk rock (think Mercy Rule) there.

Olivia Hacker (left) and Connor Husa perform during a rehearsal of "The Cunning Little Vixen" outside Kimball Hall at the University of Nebraska-Lincoln City Campus on Wednesday. The UNL opera department will present the show this weekend.

Anh Le holds a puppet during a rehearsal of "The Cunning Little Vixen" outside Kimball Hall on Wednesday.

Connor Husa (left) holds a puppet during a rehearsal of "The Cunning Little Vixen" outside Kimball Hall on Wednesday.