Ukulele love: The island instrument is becoming a hit on the plains
0 Comments
Share this
1 of 2 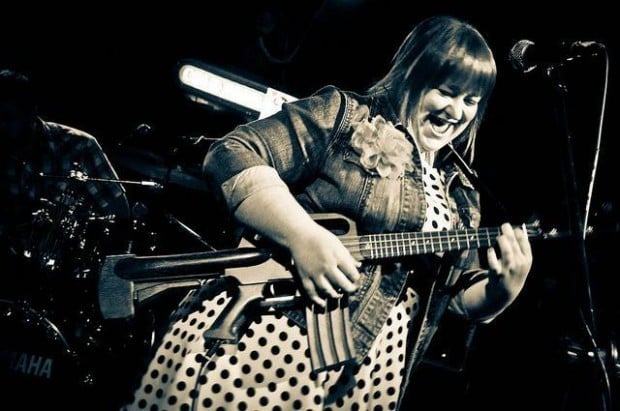 Rebecca Lowry has a machine-gun-shaped ukulele that she sometimes plays with her band, All Young Girls Are Machine Guns. The band plays Wednesday night at the Zoo Bar. (SHANNON CLAIRE/B-Side Images) 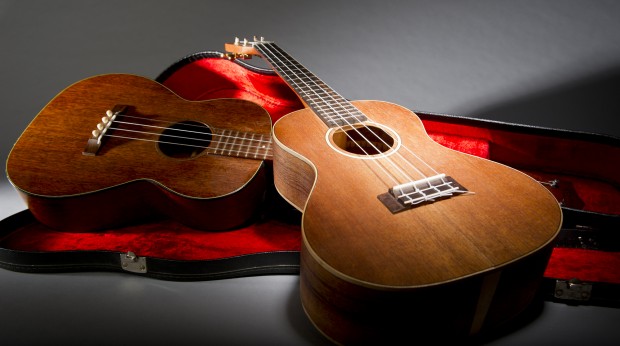 Said to be easier to learn to play than a guitar, the popularity ukulele has grown in recent years as some well-known and area musicians have worked the four-stringed instrument into their sound. The ukulele has it's roots in Hawaiian where the name roughly translates into "jumping flea."(KRISTIN STREFF/Lincoln Journal Star)

In 2008, Rebecca Lowry was struggling to find the right instrument for her. She didn't get the bass. And a guitar instructor, after one lesson, decided to take a break for the summer.

So she looked for inspiration elsewhere, and she found it on the Internet.

More specifically, she found some musicians, such as Danielle Anderson of Danielle Ate The Sandwich, reaching a wide range of emotions with one unassuming little instrument: the ukulele.

Lowry liked so many things about it. For one, she could play it with small hands. It also could produce a melancholic sound despite its beachy image.

So Lowry, who now sings and plays lead ukulele in Omaha's All Young Girls Are Machine Guns, set out to buy a uke in Nebraska. There were none to be found.

But if you go into a music store now, you're likely to find dozens of them. It turns out that the uke is cool.

"It's been pretty amazing but not all that surprising," said Ted Eschliman, co-owner of Dietze Music.

Four or five years ago, his stores probably sold about four or five ukes apiece each year. In 2011, sales at the four Dietze locations in Nebraska totaled about $70,000. National 2010 sales figures provided by the National Association of Music Merchants show that 581,000 ukes were shipped to stores nationwide at a retail value of $41.8 million, a 26.6 percent increase in retail value from 2009.

About three years ago at a music dealer industry trade show, Eschliman said he sat on a six-person panel in which the topic was best upcoming products. His was the lone voice to herald the uke.

"I got razzed," he said. "Everybody thought that was hilarious."

Eschliman said there are plenty of reasons why it's taken off. The four-stringed instrument isn't difficult to play. The nylon strings don't hurt.

People buy replacement iPods for their iPods all the time, and with the ukulele, people can afford to buy different colors and different styles without breaking the bank.

"I just saw how easy this instrument was and how people would light up (when they played it)," Eschliman said.

In his mind, the ukulele had just one hurdle, Eschliman said: It had to shed its geeky image.

"I thought that was the only thing holding it back a few years ago," he said.

Now you can hear it being looped like crazy in tUnE-yArDs tracks, played plaintively by Eddie Vedder on an album of ukulele songs called "Ukulele Songs," and in YouTube videos of rap covers, which are still incredibly, incredibly geeky.

The low-end models run $35 to $40, which lends, Eschliman said, to a big part of the uke's rise in popularity -- the "disposable consumer commodity culture." High-end models at the Dietze stores peak at about $400, he said, though the prices can climb much higher.

All of Lowry's ukuleles have been special-ordered through Dietze or Guitar Center. Emphasis on all.

There's Red, a soprano, and Ruby and Richie Tenebaum, both concert-style ukes. She won Shelly, a banjo ukulele, in a haiku-writing contest. Widget, a tenor, is her main squeeze.

And last but not least is Dolores, quite possibly the least geeky ukulele on the planet.

That's because it is shaped like a machine gun.

Her friend Micah Bruce, who studied instrument-making at Collins Guitars in Austin, Texas, told her he wanted to make her a ukulele inspired by her band's name, which was inspired by a conversation about Nabokov's "Lolita."

She predicted he might carve a machine gun-shaped hole into the body of the instrument, or something like that.

But the day before she was to play at 2011's Lincoln Calling, he showed up in Omaha and told her he had something in the car for her.

"He opened up his trunk and there it was," she said. "I wept. I remember weeping. I grabbed it from him that morning and drove straight to Lincoln."

If you want to hear what Dolores and the rest of Lowry's ukes can do, Lowry plays a show Wednesday at The Zoo Bar with Tsumi and Traveling Mercies.

Tips on buying a ukulele

Rebecca Lowry, who plays the ukulele in Omaha's All Young Girls Are Machine Guns, bought the first of her many ukes in 2008. She offered a few…

What: All Young Girls Are Machine Guns, featuring Rebecca Lowry and her ukuleles, with Tsumi and Traveling Mercies

Rebecca Lowry has a machine-gun-shaped ukulele that she sometimes plays with her band, All Young Girls Are Machine Guns. The band plays Wednesday night at the Zoo Bar. (SHANNON CLAIRE/B-Side Images)

Said to be easier to learn to play than a guitar, the popularity ukulele has grown in recent years as some well-known and area musicians have worked the four-stringed instrument into their sound. The ukulele has it's roots in Hawaiian where the name roughly translates into "jumping flea."(KRISTIN STREFF/Lincoln Journal Star)