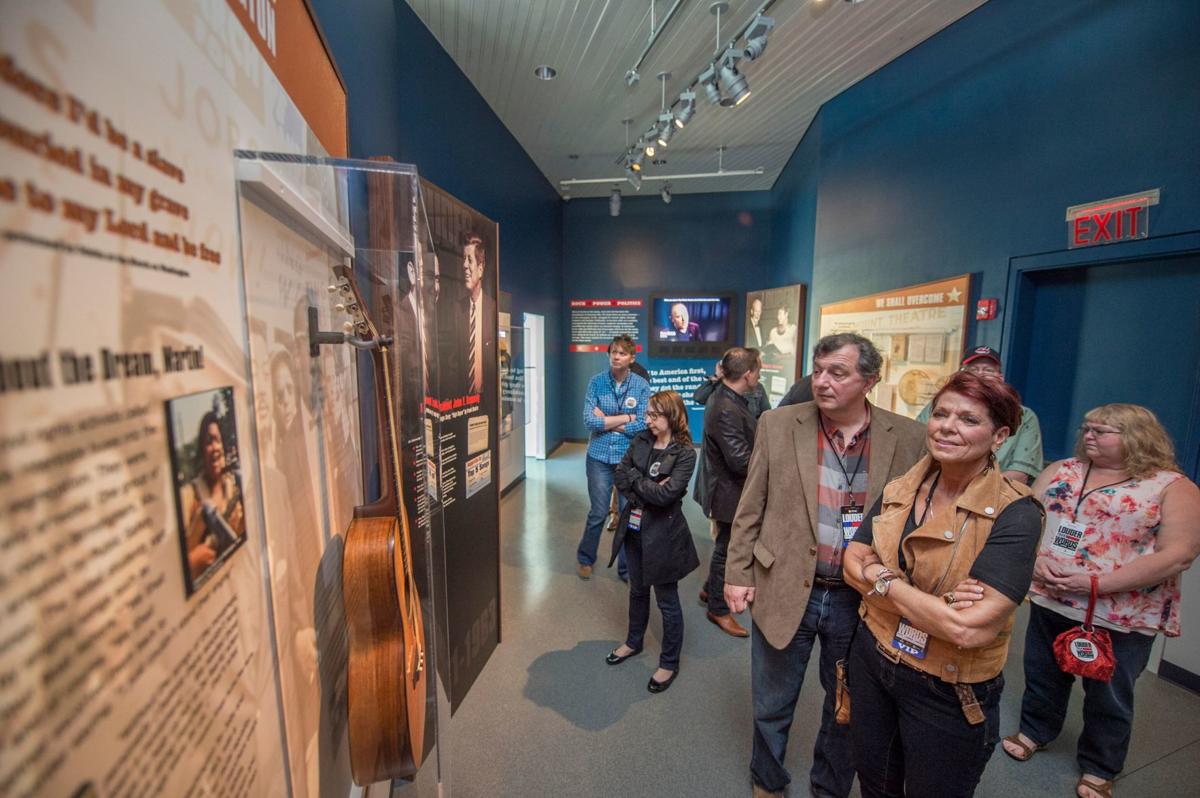 The rock memorabilia, news clippings and powerful narration tell the story of music's impact on U.S. history since the 1950s. 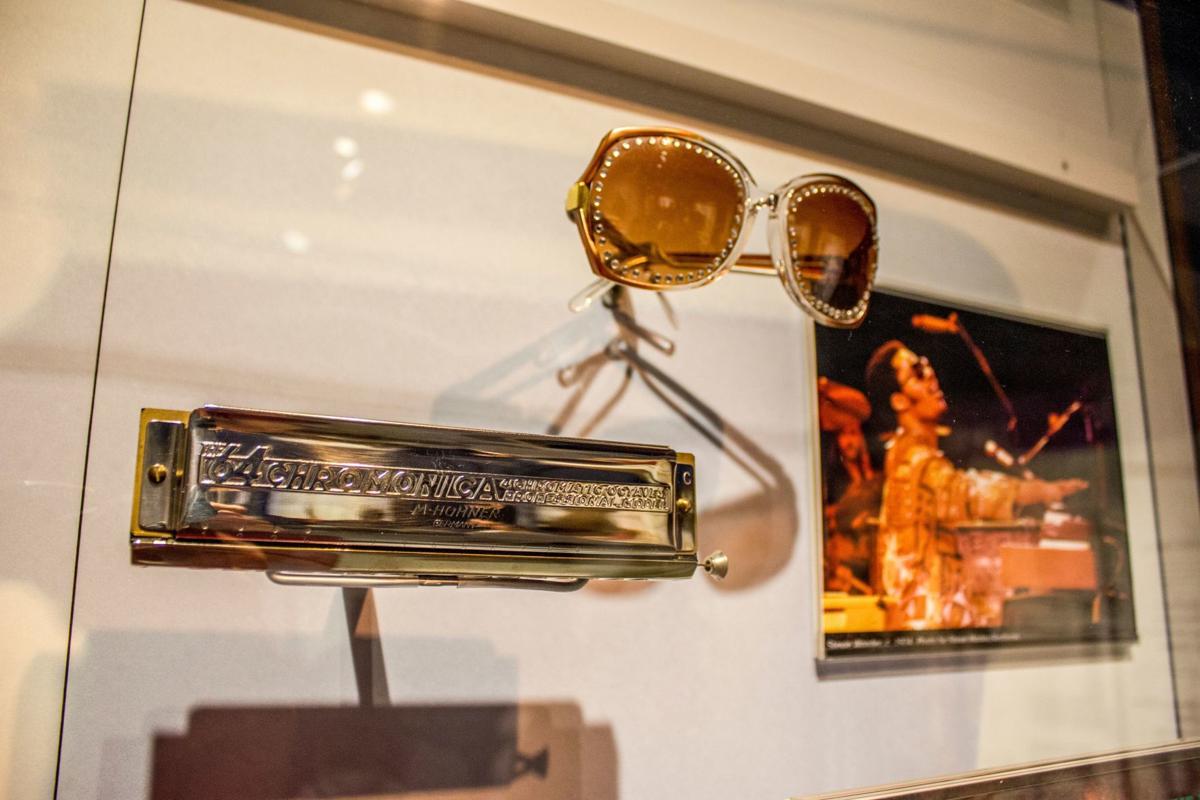 Stevie Wonder's sunglasses and harmonica are among the artifacts on display. 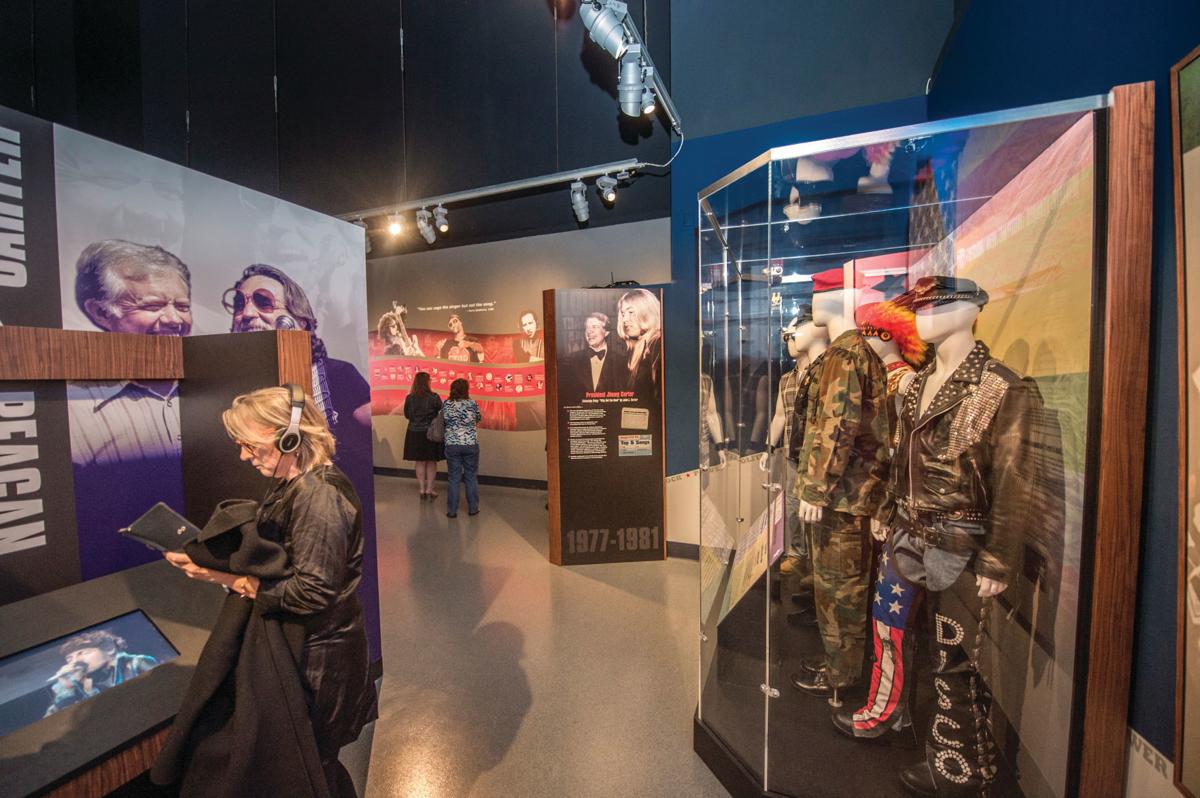 The interactive exhibit takes music lovers on a historical journey through modern times.

So says Rage Against the Machine’s Tom Morello in the video that opens “Louder Than Words: Rock, Power, Politics,” the Rock and Roll Hall of Fame and the Newseum exhibition the explores the intersection of music and politics that’s now on view at Omaha’s Durham Museum.

The show is filled with:

* Handwritten lyrics, including Bob Dylan’s “The Times They Are a-Changin’,” Neil Young’s “Rockin’ in the Free World” and “Ohio” and James Brown’s “I Don’t Want Nobody To Give Me Nothing (Open Up the Door, I'll Get It Myself)," penned on Ramada Inn stationery.

* Instruments, including the “Byrdland” Gibson ES-350 T Eric Clapton played at the 1971 Concert for Bangladesh, the “Flying W” guitar Ministry’s Al Jourgensen created in protest of the George W. Bush administration’s wars and a harmonica and sunglasses from Stevie Wonder.

* Costumes, including Bono’s U.S.-flag-lined jacket he wore during U2’s 2002 Super Bowl performance; a pair of 1970s shirts, a long sleeved model that belonged to Bob Marley and a stained “God Save the Queen” T-shirt from the Sex Pistols’ Sid Vicious; Madonna’s costume jewelry and white high heels from her “Like A Virgin” music video; and a wild George Clinton “Uncle Jam” outfit from his “Paint the White House Black” video.

They’re augmented by text, photos and a series of videos that provide historical and musical context and give the expansive show a walk-through-history feel.

Morello, one of today’s most outspoken political artists, be it with the just-reformed Rage, Prophets of Rage or in his solo work, is a constant presence in the videos that are scattered through the chronologically structured tour, organized by presidents. He’ll be our tour guide via his quotes.

The Dwight Eisenhower portion of the exhibition, the earliest days of rock ‘n’ roll, includes a Pete Seeger banjo head, Chuck Berry’s lyrics to “School Day (Ring, Ring Goes the Bell),” a panel on artists in the Army led by Elvis Presley and a brief look at the payola scandal -- the opening skirmishes in the ongoing clash between music and politics and government.

Odetta’s acoustic guitar opens the John F. Kennedy section that also includes the guitar Josh White played at the 1963 March on Washington where Dr. Martin Luther King Jr. gave his “I Have a Dream” speech, the Dylan lyrics and one of Bob’s young harmonicas -- evidence, so to speak, of music’s pivotal role in the civil rights movement.

“There has never been a successful movement for social progress that hasn’t had a great soundtrack.”

That’s Morello’s take from the video “Social Justice,” which looks at artists concerned with race relations from Sam Cooke, represented by his ukulele, to the Allman Brothers, Prince and Kendrick Lamar.

It’s found in the Lyndon Johnson section, which also had to include a look at the anti-war protests and contrasts with a few Vietnam War supporting songs and artists. So Johnny Cash’s black Nudie shirt sits against a “Ballad of the Green Berets” 45 from Staff Sgt. Barry Sadler nearby Phil Ochs’ cap and Bruce Springsteen’s draft card and 4F notice.

The requisite element in the Richard Nixon section is the famous photograph of Nixon shaking hands with Elvis Presley in the Oval Office. But the artifact of the most interest in the section is the fringed vest that the Jefferson Airplane’s Grace Slick wore at Woodstock.

“It was only later I learned the anthemic power of three chords and the truth.”

That’s Morello’s take on punk rock, particularly of the late 1970s and early '80s English variety -- an assault led by The Clash.

The battered, stickered black 1966 Telecaster that belonged to Clash leader Joe Strummer, which he played throughout his career, right up to his death in 2002 anchors the section of the exhibition with the Jimmy Carter presidency.

But it also includes the costumes of the Village People, gay rights crusaders without explicitly saying so.

The Ronald Reagan era provides the strongest contrasts between artists -- with conservative Charlie Daniels’ cowboy hat hanging next to the fringed Army field jacket of Country Joe McDonald and Springsteen’s lyrics of “Born in the U.S.A.,” one of the most misinterpreted songs ever.

Critically, it also a section on the Parents Music Resource Center and the 1985 Senate hearing it managed to gin up that was aimed at music censorship.

A bipartisan effort -- led by Tipper Gore, the wife of Sen. Al Gore (D-Tenn.) and Susan Baker, the wife of Reagan’s chief of staff, Jim Baker -- the PMRC hearing brought out the unlikely trio of John Denver, Frank Zappa and Dee Snider of Twisted Sister, whose denim, vest and T-shirt are on view, to eloquently argue against the restrictions the group had proposed.

“That’s the sugar that makes the pill go down.”

So says Morello about the fundraising concerts, recordings and tours that are highlighted in the video “Artists Unite.”

George Harrison started large benefit events with 1971’s Concert for Bangladesh -- Clapton’s guitar sits in that section of the exhibition played at that Madison Square Garden concert is one of the exhibition’s guitar highlights. And the video covers the major fundraising concerts and events from U.S.A. for Africa’s “We Are The World,” to Live Aid and Farm Aid.

“He’s clearly not listening to the lyrics.”

That’s Morello’s reaction to former House Speaker Paul Ryan’s claim that Rage Against the Machine was his favorite band. Republican Rep. Ryan wanted to use songs by Rage in his campaigns. But the band vociferously objected.

That’s just one of the examples that turn up in the video “Rockin’ for Office” that illustrates both the authorized use of songs by campaigns, like Bill Clinton’s adoption of Fleetwood Mac’s “Don’t Stop” and President Obama’s playlists, and the litany of artist rejection of campaigns -- primarily Republican -- that tried to use their songs.

The hands-down winner -- the John McCain-Sarah Palin 2008 campaign, which got cease-and-desisted or turned down by at least 10 major artists, including John Mellencamp, The Foo Fighters, ABBA, Bon Jovi and Heart, who had no desire to have Palin associated with “Barracuda.”

The most recent administrations, understandably, take up less space than their ‘60s through ‘80s predecessors. But they include Bono’s jacket and Jorgensen’s guitar under George W. Bush and the hat that Aretha Franklin wore when she sang at Barack Obama’s inauguration.

The only Donald Trump-era artifact is a blue “MAGA” gown worn by singer Joy Villa to the 2017 Grammy Awards, It has the words “Make America Great Again” running down its left side and “TRUMP” around the train. A provocateur in the left-leaning music industry, Villa repeated her gown politicking at this year’s Grammys, wearing a gown covered with a pattern of bricks and emblazoned with “Build The Wall.”

It’s hardly news that most artists come from the left side of the political spectrum. So even though “Louder Than Words,” tries not to have a political agenda or endorse any viewpoint, it can’t help but tilt in that direction -- the activism of, say, Strummer, Springsteen and Bono is simply unmatched from the right.

That said, the exhibition concludes with a call, regardless of party or political leaning, to activism and involvement. In Morello’s words:

“The world changes by people like you getting the wheel of history. Change comes from below.”

Reach the writer at 402-473-7244 or at kwolgamott@journalstar.com. On Twitter @KentWolgamot

The Marshall Tucker Band didn’t intend the distinctive rock-meets-country sound that made hits like “Can’t You See” and “Heard It in a Love Song.”

Never, ever believe any band that says it is doing a farewell tour.

Check It Out: Top Lincoln entertainment options from Nov. 22 - 28

Plan your calendar around these popular acts coming to the area.

The rock memorabilia, news clippings and powerful narration tell the story of music's impact on U.S. history since the 1950s. 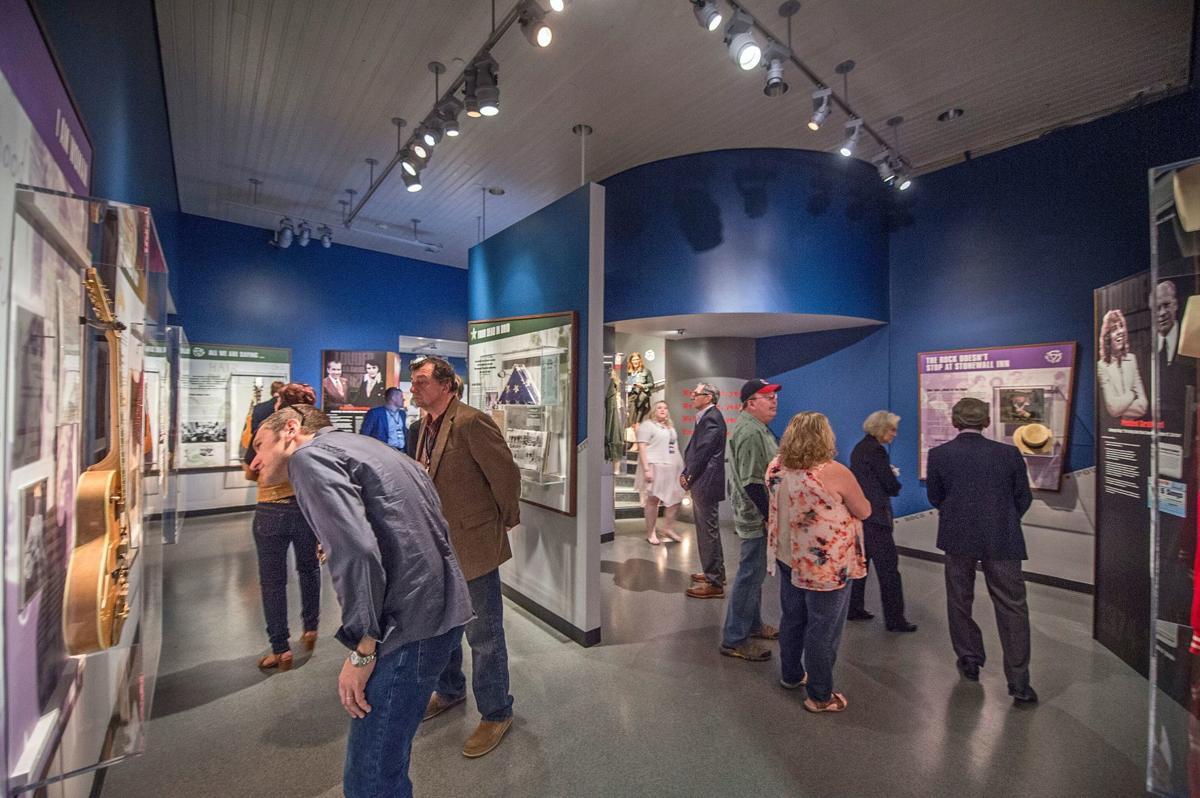 The exhibit is at the Durham Museum in Omaha.

Stevie Wonder's sunglasses and harmonica are among the artifacts on display. 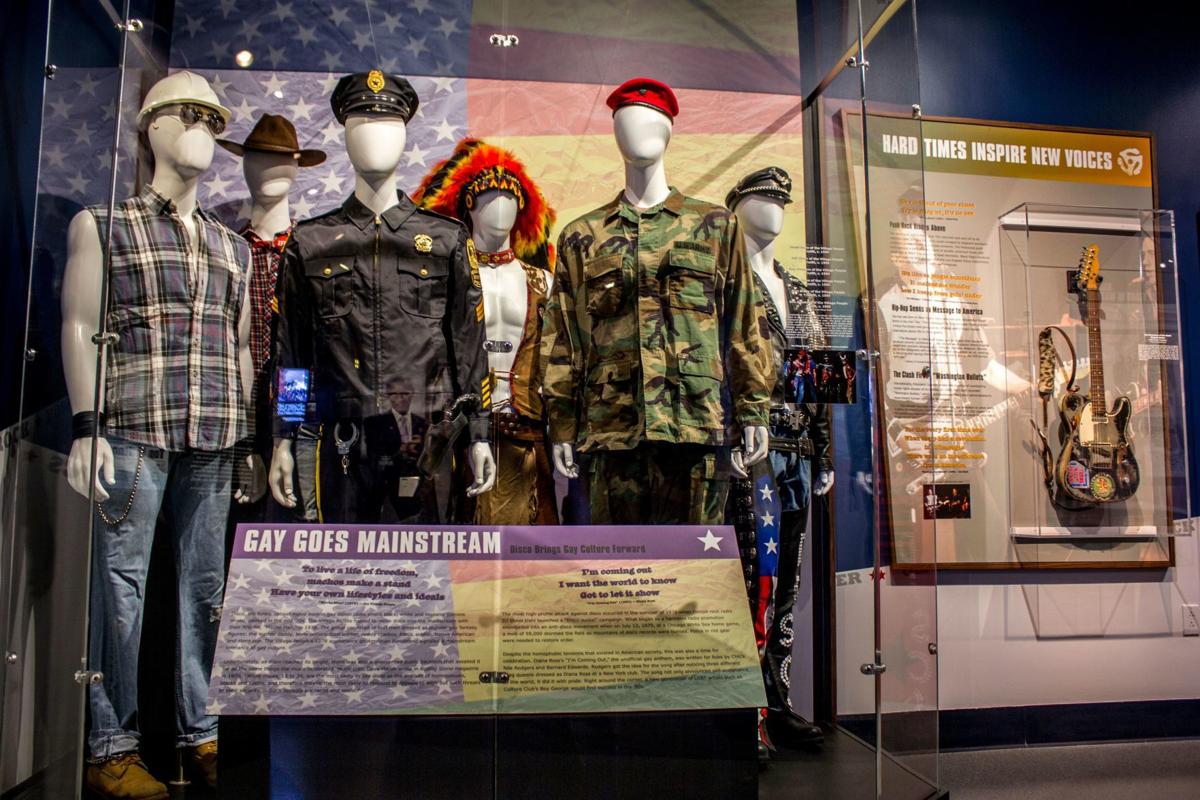 The Village People were a voice of homosexuality in the 1970s. Their costumes are on display.

The interactive exhibit takes music lovers on a historical journey through modern times.