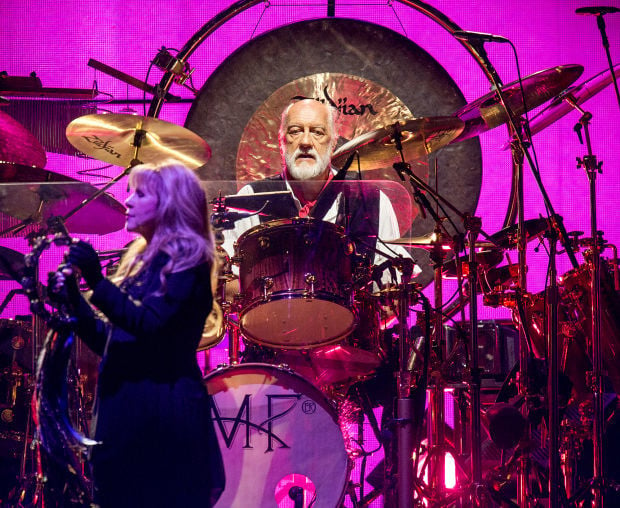 Fleetwood Mac drummer Mick Fleetwood (right, pictured here with singer Stevie Nicks) got sick and had to leave the stage during the band's 2015 appearance at Pinnacle Bank Arena. 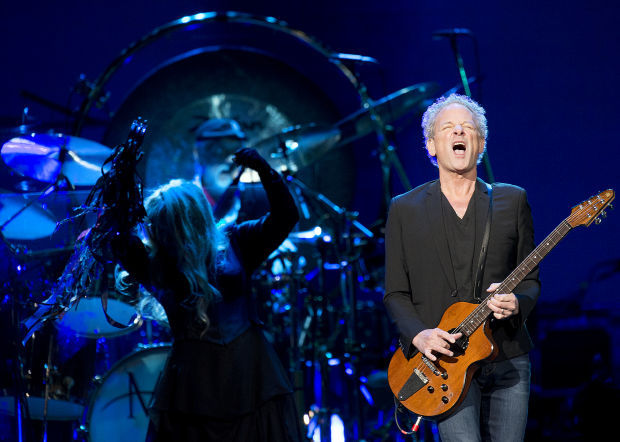 Fleetwood Mac guitarist/vocalist Lindsey Buckingham (right) plays a stinging solo during "The Chain" on stage on Saturday, Jan. 17, 2015, during a performance at Pinnacle Bank Arena. 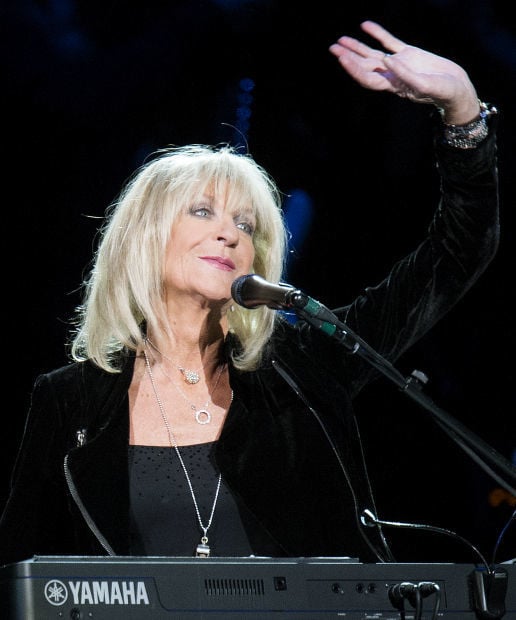 “Mick is really sick,” Stevie Nicks told the crowd, adding that Fleetwood was backstage throwing up. “We feel terrible, but we can’t really make him play. Give us a minute, and we’ll figure out what to do.”

That turned out to be playing two more songs.

A drum tech named Steve took over Fleetwood’s kit for “Go Your Own Way,” which is usually the song the band plays before two encores.

Then, after a short break, Christine McVie returned to the stage at a grand piano, playing and singing “Songbird” accompanied by guitarist Lindsey Buckingham.

“Poor old Mick is really sick,” McVie said. “I sing this for him and for all of you.”

“Songbird” has been the final song on the band’s “On With the Show” tour, usually capping a 2½ hour show. Saturday’s truncated set ran just over 90 minutes.

“In all of our 40 years, this has never happened,” Nicks said.

Prior to the abrupt ending, Fleetwood Mac had pumped out 14 songs, all familiar to the 14,000-plus that packed the arena Saturday -- and sounded and looked good doing it.

Saturday's show was the second of 2015 for Fleetwood Mac and the 41st of 80 total dates on the "On With the Show" tour. That meant a fresh Mac, but one already tightened by 41 previous shows. And it is a complete band, thanks to the return of McVie, who came back to the group last year after a 16-year absence.

Her songs, "You Make Loving Fun,” “Everywhere” and “Say You Love Me" were highlights simply because they hadn't been heard live for years.

And she can still sing -- as can Nicks and Buckingham. Some of the songs have been dropped in key. But that didn't change the fact that the Mac -- now in their mid-60s to early 70s -- remains a fine band.

Perhaps evidence of how quickly Fleetwood’s illness hit him, I twice noted his solid drumming in my notes and the tightness of his work with bassist John McVie.

The show began with “The Chain,” “You Make Loving Fun” and “Dreams,” the song of the night that features Nicks, the biggest star in the Mac constellation. She, of course, connected with “Rhiannon,” doing one of her shawl dances while effectively delivering the witchy lyrics with her rough, seductive vocals.

The University of Nebraska marching band didn't turn up for "Tusk.” But Fleetwood Mac still rumbled and roared with Christine McVie strapping on an accordion to add to the crowd-pleasing stomp.

"Tusk" and its follow-up, "Sisters of the Moon," were among the loudest songs of a show that, while far from ear-splitting, was louder than I anticipated -- a good thing.

A good percentage of Saturday's crowd would have been little kids or, in Buckingham's words "not even born yet" during Fleetwood Mac's mid-'70s heyday.

"We're pulling in all ages. I love it. We must have done something right," Buckingham said before doing "Big Love" solo, demonstrating he's a wicked guitarist on a hollow-body electric.

He then switched to acoustic and was joined by Nicks for a touching version of "Landslide" that she dedicated to one of her best friends, Lisa, who she said is from "this amazing city" and must be hurting. "Lisa, all the people in this room are sending you love, every one of them," she said at the song”s end.

Buckingham then did a solo version of “Never Going Back Again” using the acoustic. Then came Nicks’ announcement of Fleetwood’s illness.

During her announcement, she said that Fleetwood Mac would return and do a show and a half, but that is unlikely, as are refunds for the shortened concert.

On the Beat: What happened with Fleetwood Mac

Over the years, I’ve seen club and small venue shows abruptly derailed for everything from power failures and instrument breakdowns to objects…

On record, Mark Kozelek is often billed as Sun Kil Moon. But he also records and tours under his own name.

10 most popular entertainment stories of 2015

Fleetwood Mac appears at Pinnacle Bank Arena in a performance that showcases many of their classic songs to a sold-out audience on Jan. 17, 2015.

Fleetwood Mac drummer Mick Fleetwood (right, pictured here with singer Stevie Nicks) got sick and had to leave the stage during the band's 2015 appearance at Pinnacle Bank Arena.

Fleetwood Mac guitarist/vocalist Lindsey Buckingham (right) plays a stinging solo during "The Chain" on stage on Saturday, Jan. 17, 2015, during a performance at Pinnacle Bank Arena.