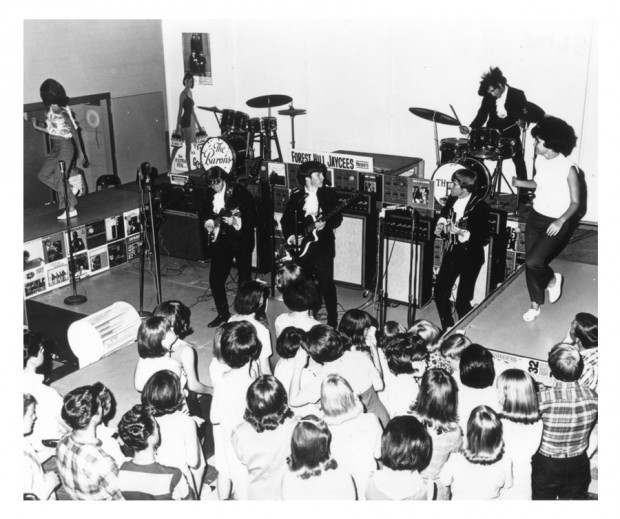 An image of The Elite from "Teen A Go Go." (RODGER BROWNLEE / Courtesy photo) 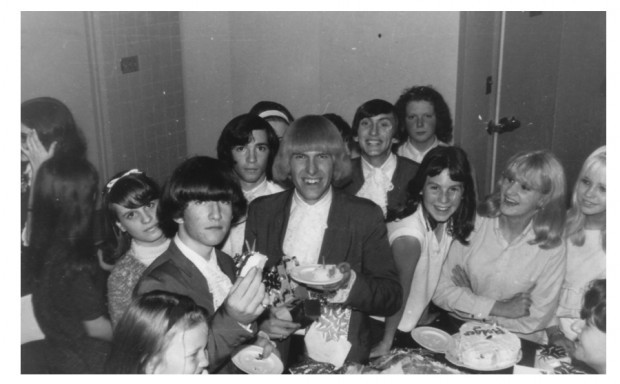 Roger Brownlee (middle) of The Elite meets fans in an image from "Teen A Go Go." (RODGER BROWNLEE / Courtesy photo)

In the mid-1960s, most every town of any size had a teenage music scene where garage bands inspired by the Beatles and the British Invasion played for their peers, often in National Guard armories, pavilions and ballrooms rearranged to host rock ‘n' roll dance parties.

No place, however, had a bigger or better scene than Fort Worth, Texas. I've heard about the Fort Worth scene for years from friends who grew up there and through interviews with the likes of Delbert McClinton and the late Bugs Henderson, who died from cancer two weeks ago.

Henderson, a take-no-prisoners blues/rock guitarist, cut his teeth playing the Fort Worth teen scene and at The Cellar, an infamous Cowtown club that featured a light system that warned performers when the cops or owner were about to come in and told them to keep playing when a fight broke out.

Henderson is one of those interviewed in "Teen A Go Go," a new DVD/digital download documentary about the Fort Worth teen scene that includes some vintage footage of the bands, lots of music played under the interviews, some great old pictures and some even better stories.

As was the case in most cities outside New York and Los Angeles, it's not likely that you've heard of most of the groups featured in the film. That is, unless, you're a garage rock fan and have the three Norton Records "Fort Worth Teen Scene" CDs/LPs.

But the odds are good that you know at least one of the songs that came out of Fort Worth: Bruce Channel's 1962 hit "Hey Baby," a tune that's often played by the Nebraska band at football and basketball games.

That's where McClinton enters the story. He played the harp solo that carries "Hey Baby" and, while on tour in England with a new local group, he taught an inquisitive young guitarist to play the harmonica.

That guitarist was John Lennon. The harmonica turned up on "Love Me Do." The Beatles inspired the teen scenes, bringing things full circle.

I've heard the tale from McClinton, while sitting on a broken-down couch in the dressing room at Austin's La Zona Rosa, and from Joe Nick Patoski, a Texas music historian and Willie Nelson biographer who recounts it in the film.

Two other songs from Fort Worth still get played: One is Larry and the Blue Notes' "Night of the Phantom/Sadist." There's a great story in the film about how the producer, Fort Worth's answer to Col. Tom Parker, made the band change the name "sadist" to "phantom" to avoid FCC attention. The second is The Elites' "One Potato, Two Potato, Three Potato, Four," which most recently was covered by Japan's The 5.6.7.8's (the band in "Kill Bill").

The Elites were the kings of the Fort Worth teen scene, drawing 1,500 kids to the ballrooms and becoming rock stars on a very small scale. They never made it outside Fort Worth, nor did any of the others, except Channel.

But they sure made some good music and had a great time, often sharing stages with national touring acts like The Doors and The Yardbirds and, in the case of The Kandy Kanes, a rare all-girl outfit, loaning their equipment to the Rolling Stones.

"Teen A Go Go" entertainingly covers that scene, which died out when the nationalizing and "professionalizing" of rock in the late '60s left little space and attention for local, raw rock ‘n' rollers, the go-go girls who happily danced away to their music and the throngs of teens who couldn't get enough on the teen scene.

Jamey Johnson to kick off major 2021 concerts in Lincoln Friday

Outlaw country's Jamey Johnson will return to Lincoln for a Friday Pinewood Bowl show that will be the first major concert in the city in 2021.

CDC guidance saying fully vaccinated people can go maskless has spurred a desire to return to normal, and to concerts. So how risky are indoor concerts?

CMT Music Awards 2021: How to watch and who's performing

The CMT Music Awards are Wednesday night. The show, which will air live from Nashville, is hosted by Kane Brown and Kelsea Ballerini and some of country's biggest names are set to take the stage.

Who has the Song of the Summer? Lorde, Eilish, Mayer shoot their shot

We don't get to choose the Song of the Summer. It chooses us.

Prospective purchasers can virtually get in line in a Ticketmaster "waiting room" an hour earlier, guaranteeing they will be among the first to get tickets for the first Memorial Stadium concert in 34 years.

More than 70,000 tickets for Brooks’ concert were sold in 47 minutes Friday morning.

The Aug. 10 Avett Brothers/Willie Nelson Pinewood Bowl concert is essentially sold out, providing evidence of the pent-up demand for live in-person shows that will, over the next couple months, start to be met.

What's Going On: Bartels is back in Nebraska

Evan Bartels comes back to Nebraska for a pair of solo shows, the first at the Zoo Bar Friday.

An image of The Elite from "Teen A Go Go." (RODGER BROWNLEE / Courtesy photo)

Roger Brownlee (middle) of The Elite meets fans in an image from "Teen A Go Go." (RODGER BROWNLEE / Courtesy photo)