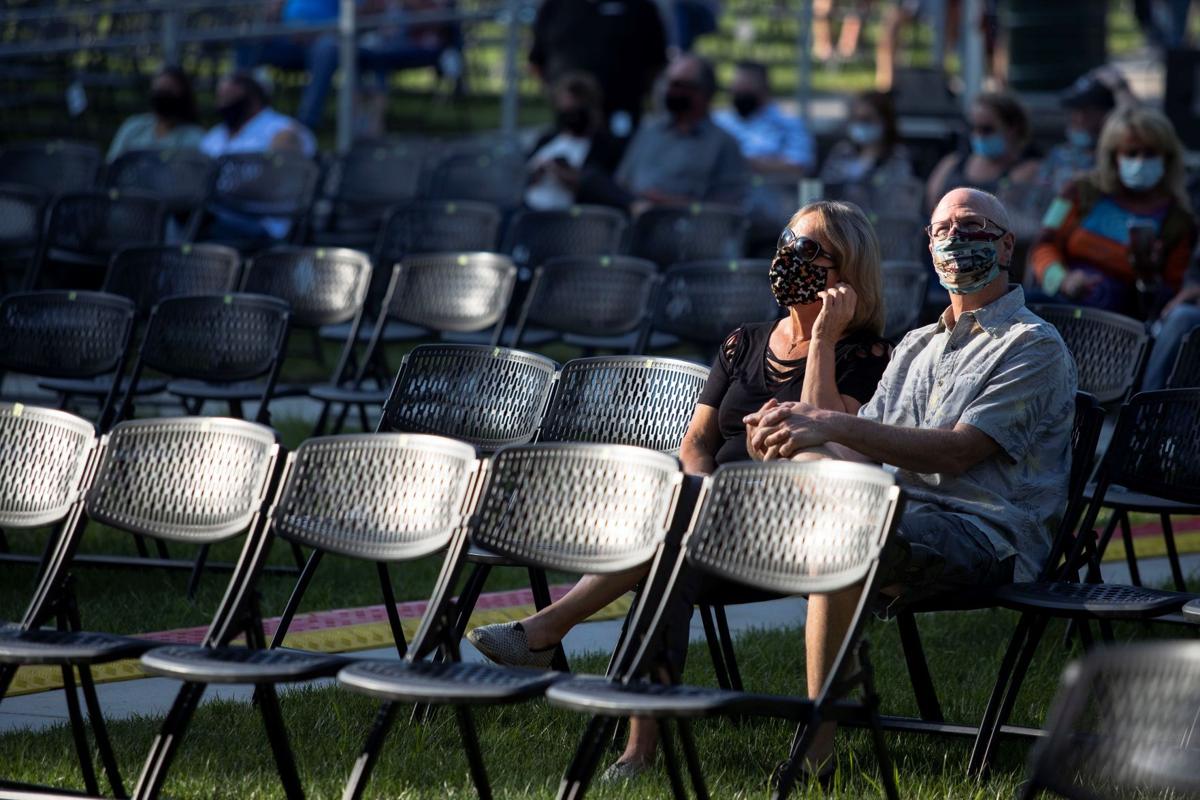 A couple sits in a row while wearing face coverings before the Beach Boys performance at Pinewood Bowl on Sunday, Aug. 2. Seating at the concert was set up to follow social distancing guidelines. 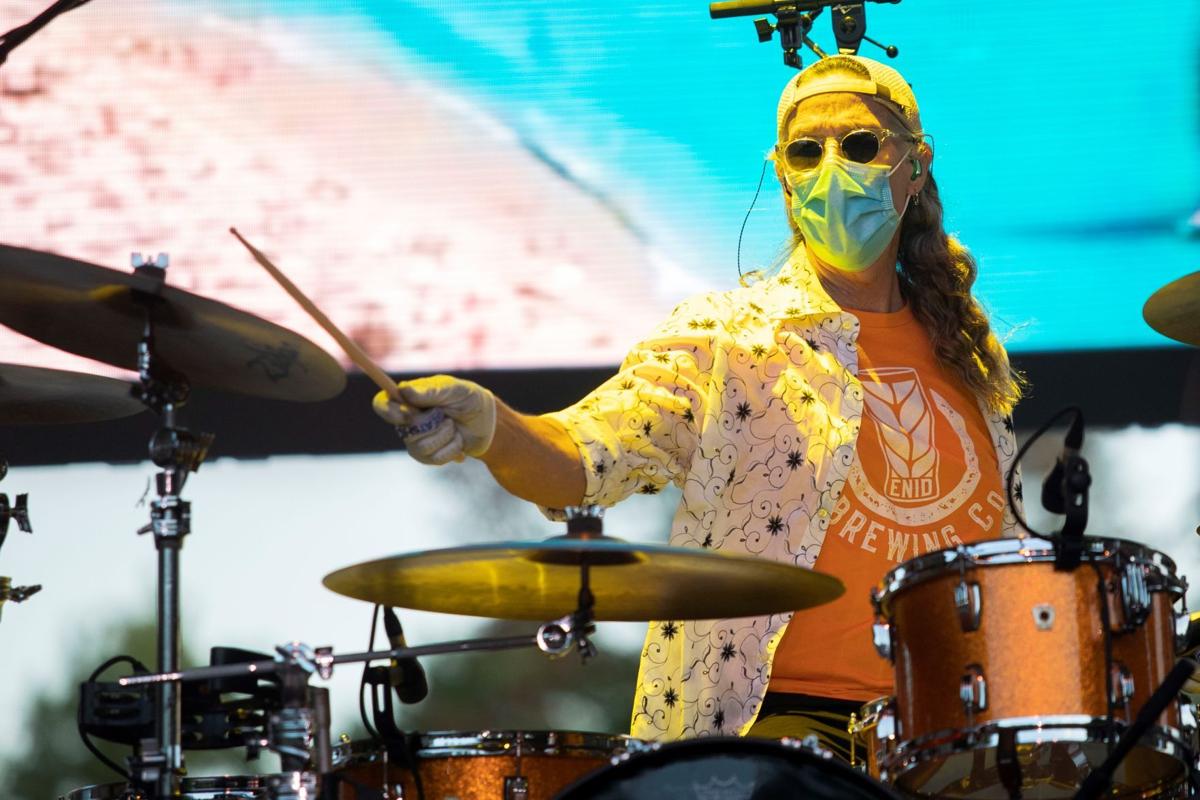 Drummer John Cowsill wears a face covering and gloves while he performs during the Beach Boys performance at Pinewood Bowl on Sunday. 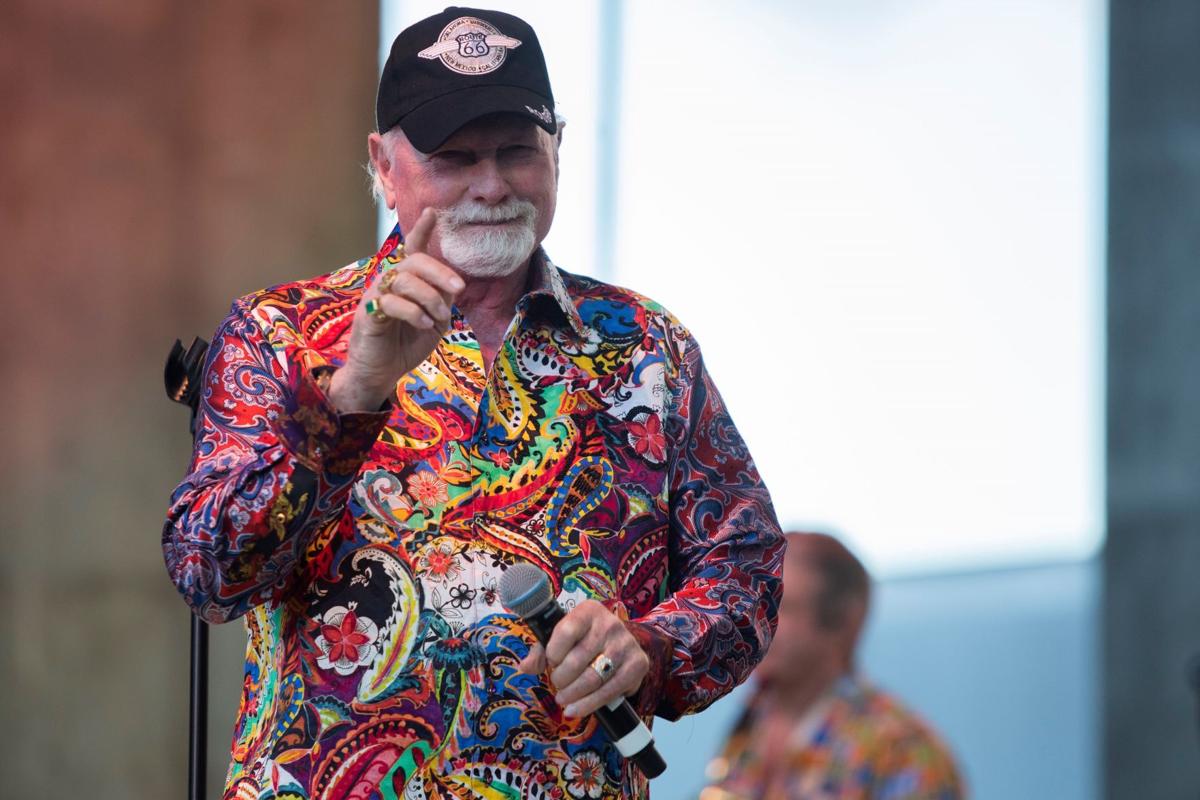 Mike Love grooves to the music while singing and pointing at audience members during the Beach Boys performance at Pinewood Bowl on Sunday.

Mike Love and Bruce Johnston peeled off their masks as they strolled onto the Pinewood Bowl stage Sunday evening, waving to the 2,000 people scattered throughout the Pioneers Park amphitheater.

“We’ve got a show going on,” Love said as he picked up the microphone and the Beach Boys kicked into “Do It Again.”

Thirty-six songs and two hourlong sets later, the touring version of the iconic ’60s rock ’n’ roll band wrapped up the first in-person concert in Lincoln since March and one of the first anywhere since the coronavirus shut down entertainment nearly four months ago.

“We’re a little nervous,” Love said after a fast-paced “Surfin’ Safari.” “You’re only the second audience we’ve played for since March. At least somebody in Nebraska has the good sense to allow a concert.”

That “somebody” is the Lincoln-Lancaster County Health Department, which worked with ASM-Lincoln to craft a plan and seating arrangements for a safe show.

Capping attendance at 2,200, well under 50% of the venue's capacity, the seating was spread apart — about 5 feet between rows — in small pods of two, four and six seats with space between each pod.

Duffy's Tavern to reopen outdoors with its Monday comedy show

Masks were required and worn by the audience, staff and even the drummer and, notably, lines coming into the venue were well-spaced, fast-moving and didn’t bottle up during the 30 minutes before the show.

I’d have never guessed I’d hear The Ramones’ “Rockaway Beach” at a Beach Boys show. But out it came, played by the seven-piece band with enough punk edge to have made Dee Dee happy.

That was one of the handful of cover songs included in Sunday’s show that, because it was two sets, was more interesting and enjoyable than the band’s last Lincoln show — a run-through-the-hits affair at Pinewood Bowl.

L. Kent Wolgamott: 'Save Our Stages Act' could save independent music venues

The longer show also allowed the Beach Boys to pull out some less familiar songs, like “Getcha Back” and the Johnston-sung “You’re So Good to Me." Johnston also sang his “Disney Girls,” and Love paid tribute to George Harrison with his “Pisces Brothers.”

There was also room for three songs from “Pet Sounds,” the band’s 1966 masterpiece, including “God Only Knows,” sung by Love’s son Christian as a tribute to Carl Wilson.

Dennis Wilson got his nod on “Do You Wanna Dance?” But there was nary a mention of Al Jardine and the group’s musical genius Brian Wilson — the other two original Beach Boys who have been feuding with Love for years.

The hits were all there, too, with the 79-year-old Love handling the vocals on most songs — and doing a decent job.

That said, as he got ready to sing “Be True to Your School,” he had trouble finding the opening note.

“If you ever make up a song, think about doing that song 50 years later,” he said. “You’ll think more about what key you put it in.”

Apropos to the night, the Beach Boys opened the three-song encore with “This Too Shall Pass,” a ’50s-style rocker that Love wrote and the band recorded remotely during the pandemic.

“Washing hands and wearing masks and it’s not even Halloween,” Love sang, encouraging listeners to follow the health recommendations so “we can get back to fun, fun, fun in the sun.”

That had already happened — at least for one evening — via the highly enjoyable, much-needed show the Beach Boys brought to Pinewood.

South Dakota, which has seen an uptick in coronavirus infections in recent weeks, is bracing to host hundreds of thousands of bikers for the 80th edition of the Sturgis Motorcycle Rally.

L. Kent Wolgamott: Thanks, Beach Boys and Pinewood Bowl for a much-needed concert

It felt very safe -- I was closer to more people on a Friday afternoon trip to Hy Vee than I was at Pinewood Sunday. The lines didn’t jam up. I was in the main gate line for all of two minutes.

Ross theater to bring movies back to Lincoln Aug. 21

Up and coming local musician Noah Floresch has released a new EP titled "A Book of Stories," which he hopes can both bring a smile and catch the limelight during a dry spell for the music industry.

Matthew Erb blew into the tuba he held in one hand, sometimes stopping to take a sip of the beer in his other hand, before lowering to the gro…

Concerts will be back next year -- lots of concerts, Pinnacle Bank Arena manager says

How many shows are too many shows? It’s a question that promoters and venues have to ponder as they start lining up concerts for next year.

A couple sits in a row while wearing face coverings before the Beach Boys performance at Pinewood Bowl on Sunday, Aug. 2. Seating at the concert was set up to follow social distancing guidelines.

Drummer John Cowsill wears a face covering and gloves while he performs during the Beach Boys performance at Pinewood Bowl on Sunday.

Mike Love grooves to the music while singing and pointing at audience members during the Beach Boys performance at Pinewood Bowl on Sunday.