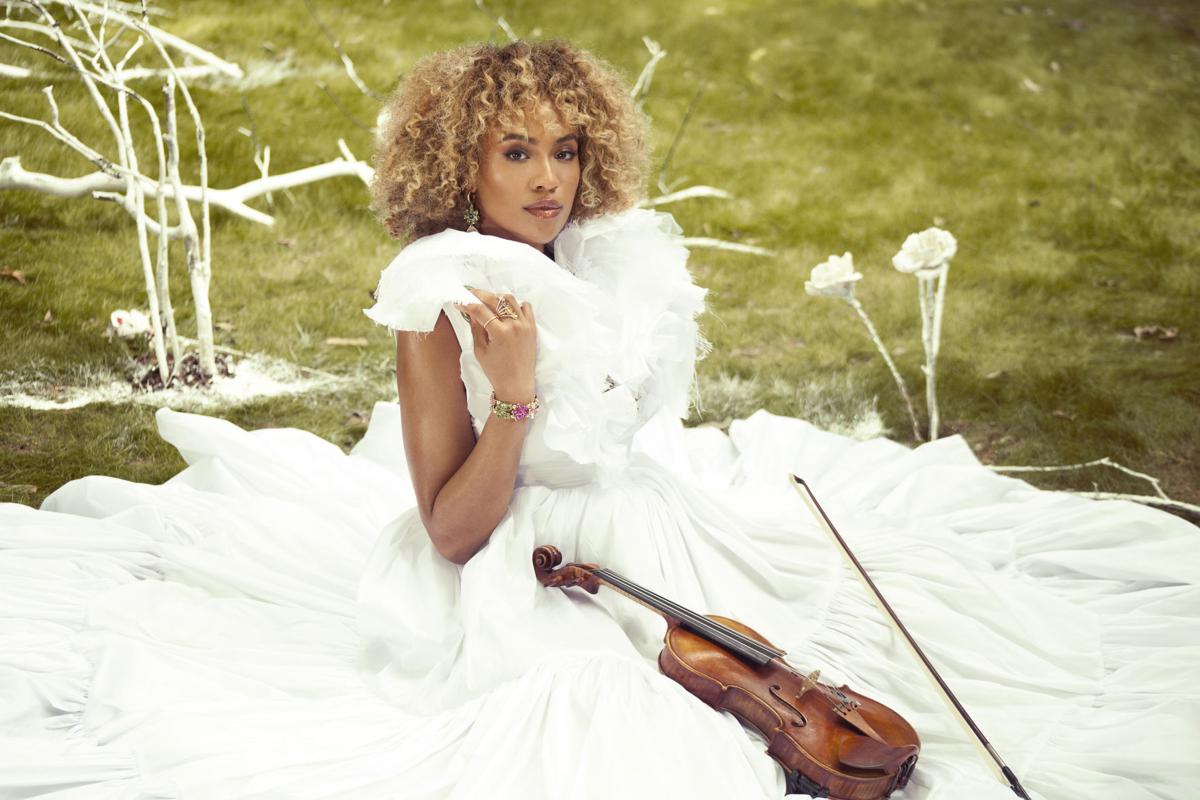 Lincoln native Ezinma will release her debut single "Beethoven Pleads The Fifth," a classical violin and hip-hop mix on Friday. 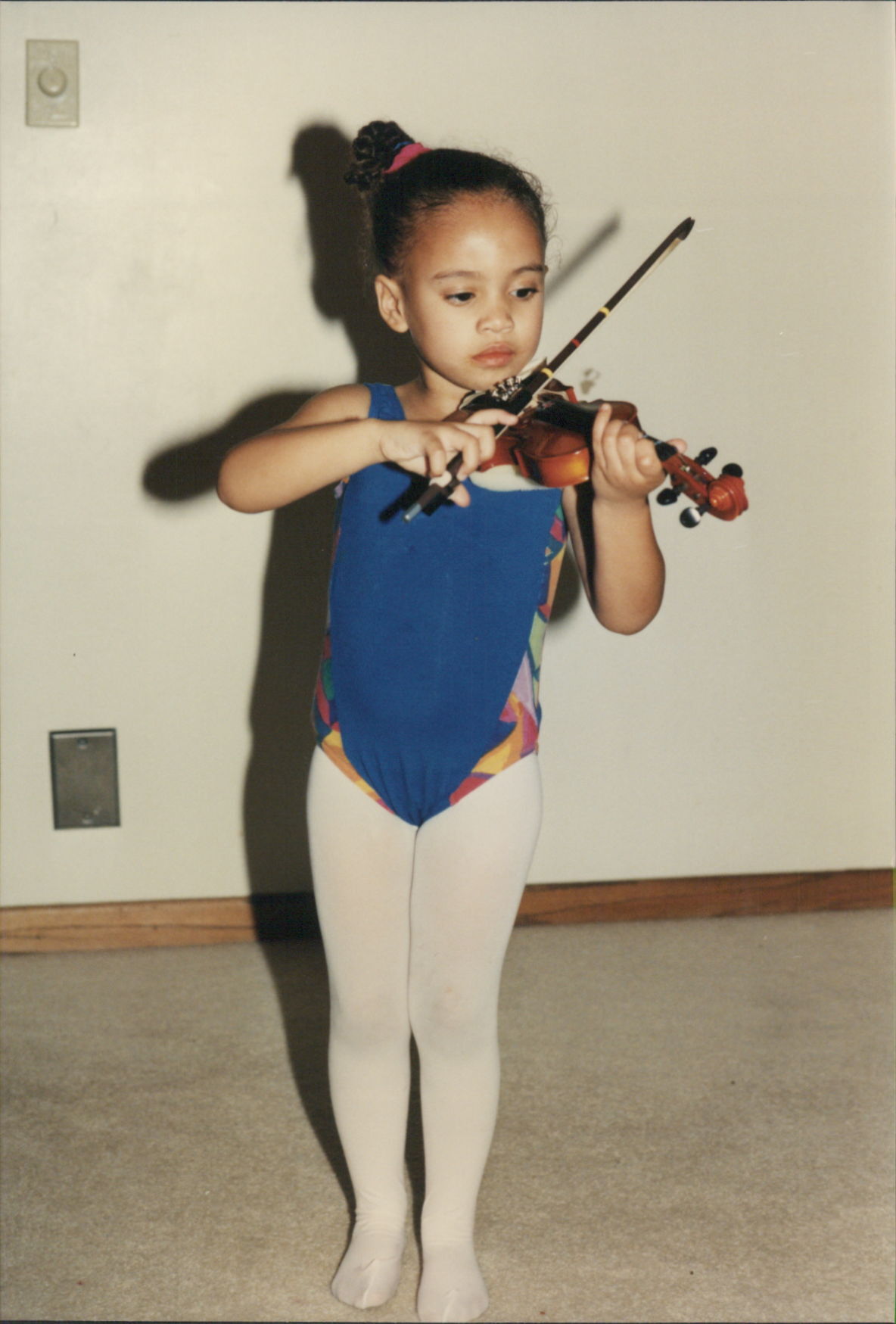 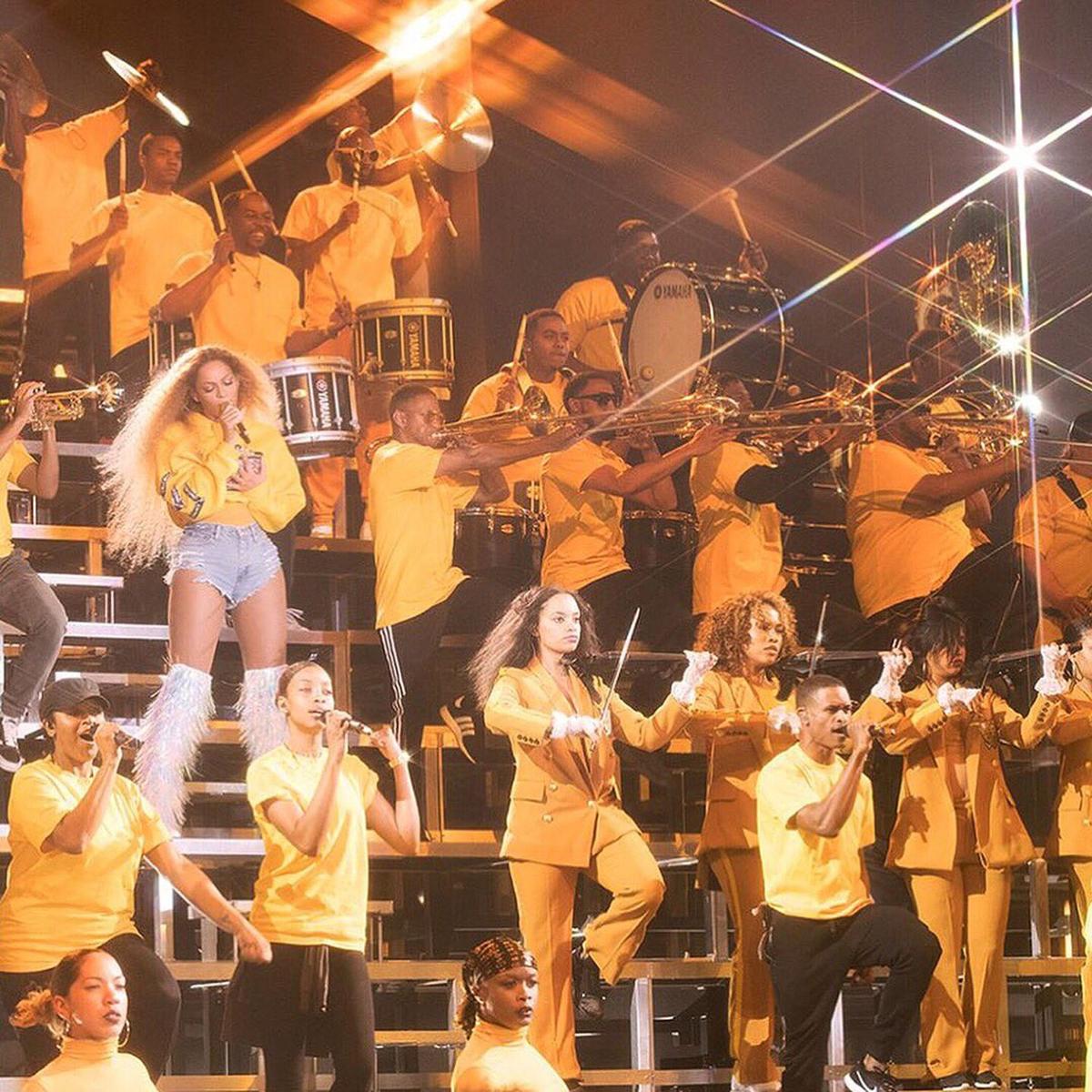 Ezinma (second from right on violin) plays with Beyonce at Coachella in 2018. 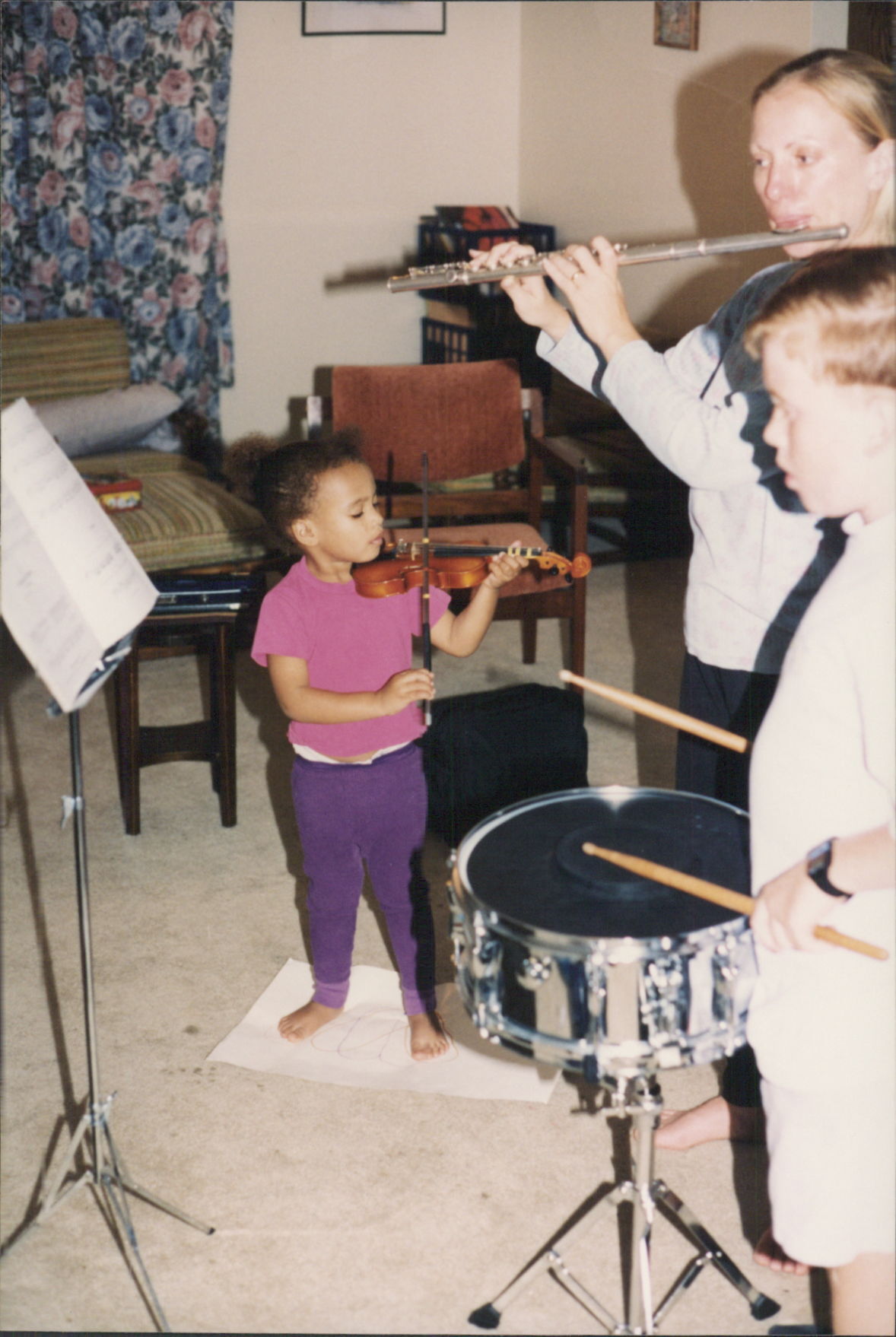 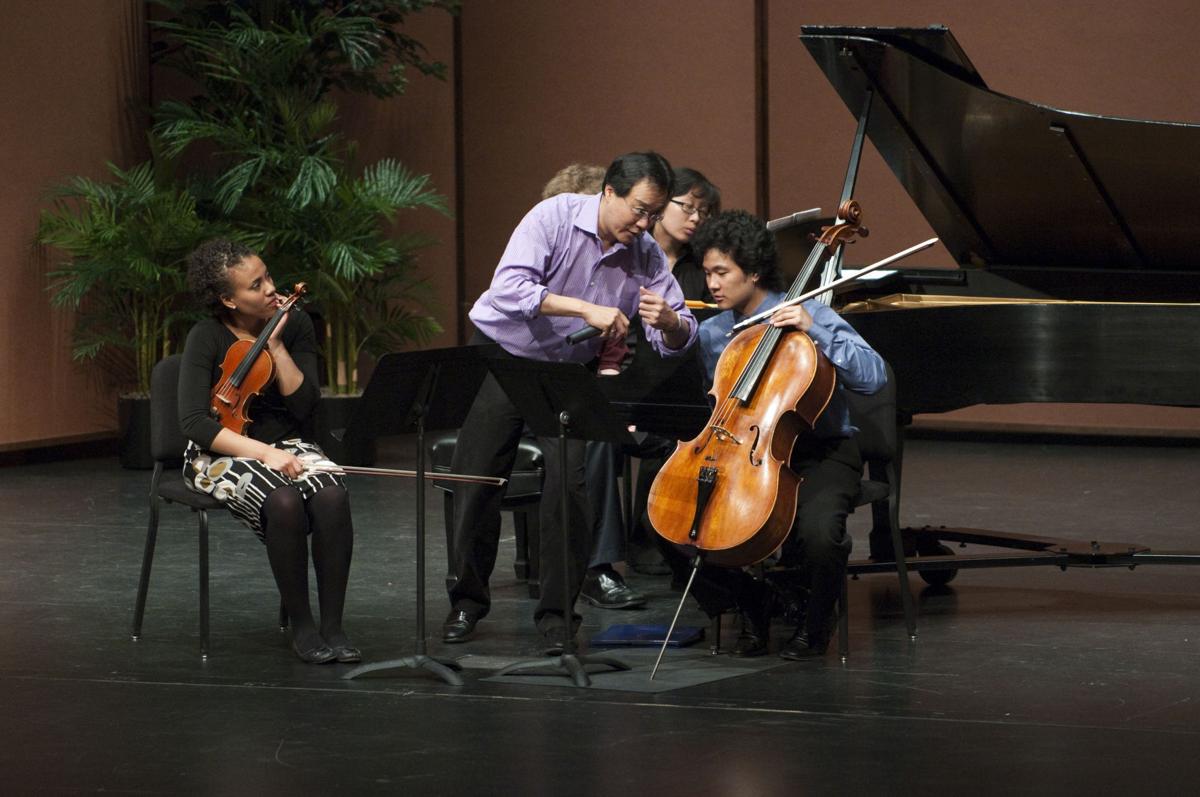 She’s been catching ears and eyes with her viral videos playing classical violin versions of hip-hop and trap music.

She played Coachella with Queen Bey, a member of Beyonce’s all-woman band that turned the massive Southern California music festival into "Beychella" two years ago.

She’s an activist, working to encourage Black children to take up classical music and the arts.

Her groundbreaking debut single, “Beethoven Pleads The Fifth,” will be released next month.

Her name is Ezinma and she’s from Lincoln.

“Ezinma is my performance name,” she said from New York earlier this month. “Everyone in Lincoln knows me as Meredith Ramsay.”

She's been playing violin all her life, almost from the day she was introduced to the instrument in the Suzuki program at Prairie Hill preschool when she was 3.

“I bugged my parents to play, I got a violin and the rest is history,” she said.

Throughout her school years, at Everett and Ruth Hill elementaries, Scott Middle School, Southwest High and at the University of Nebraska-Lincoln, Ramsey “did it all, the whole classical thing — Lincoln Youth Symphony, Lincoln Symphony Orchestra, All-State every year.”

But she wasn’t just studying violin at UNL. She was majoring in biochemistry with an eye on medical school.

After working with Hyeyung Yoon of the Chiara String Quartet and violin Professor David Neely in what she called a "dream situation," Ramsay moved to New York in 2012 to study at the New School’s Mannes School of Music.

There she took a music production class that changed her life.

She said she was practicing six hours a day and then going to rehearsals when she discovered she could make a song in three minutes with a laptop.

“I just began messing around. I love hip-hop, there’s a starkness to it. I found myself taking the classical pieces I was working on in school and remixing them, reworking them with hip-hop.”

While she performed with string quartets and orchestras at Carnegie Hall, Lincoln Center and Madison Square Garden, Ezinma was making videos of her covers of songs like Lil’ Pump’s “Gucci Gang” and Post Malone’s “Rockstar” — a practice that she continues today. Two weeks ago, she put up a video of her playing DaBaby’s “Rockstar.”

Ezinma’s breakthrough came when her cover of Future’s “Mask Off,” part of the rapper’s #MaskOffChallenge, took off online, garnering hundreds of thousands of YouTube views, millions more on Instagram and Twitter, and a Facebook invitation from an impressed Beyonce.

Ezinma worked for her for three years. She joined Beyonce near the end of her Formation World Tour and was with her during the release of “Lemonade.”

“Watching the greatest entertainer in the world work and build a show blew my mind," she said.

She said playing in a band with all women musicians of color was inspiring and built her confidence.

“Beyonce reaching out, then working with all these different artists, I guess I’m doing the right thing,” she said.

Growing up as the daughter of Black Guyanese father Colin Ramsay and German-American mother Lisa Knopp, Meredith experienced prejudice and cultural isolation in Lincoln, particularly in the realms of ballet and classical music.

“When you don’t see people who look like you doing what you’re doing, you definitely feel alone,” she said. “The schools I went to were predominantly white schools. They were great, but I was always the loner, always different. Going to orchestra, I was the only Black kid. I faced some challenges. I had my parents and a great support system, but it wasn’t always easy.”

Now she’s fighting to break down those barriers for children through HeartStrings, her nonprofit youth development program for kindergarten through fifth grade children of diverse backgrounds that equips students with quality instruments, instruction and access to concerts and performances.

That, Ezinma said, is activism her way, begun before the current Black Lives Matter moment.

“I’m challenging a lot of preconceptions in the music business. I really hope what I'm doing is paving the way for future violinists, clarinetists, to go further. I hope what I’m doing can help when it comes time for the next Ezinma.”

Friday, Ezinma’s music will get even more exposure when “Beethoven Pleads The Fifth” hits streaming platforms. The three-minute instrumental takes the familiar theme from Beethoven’s Fifth Symphony and underlies it with hip-hop rhythms and places Ezinma’s distinctive violin on top of the mix.

It’s one of a quartet of songs that Ezinma will release on an EP in the next few months.

“For me, the most difficult thing was to find the balance, be authentic to hip-hop and authentic to classical. That’s why I haven't released music earlier. I wanted the balance to be at the best level possible. These songs have that.”

Once again, Ezinma hopes to be breaking down barriers with her music — this time opening up the world of classical music to those who feel shut out by the “elitist” music.

“Classical music can feel pretentious, stuffy, and honestly, can make people feel dumb, like if they’re at a concert and clap at the wrong time,” she said. “I’m working not to push people away. I’m hoping the record and what I do can bring more people into the classical space and make it accessible to everyone.”

Like nearly all other artists, Ezinma has had the shows she’d scheduled in 2020 canceled or postponed because of the coronavirus. She’s planning a full schedule of concerts in 2021, including, if she gets her wish, a Lincoln date.

"To come to Lincoln and do a show at the Lied Center would be an honor for me. I did all my dance recitals there, LSO there. It feels like home and I would love to bring my music there.”

After spending most of the coronavirus quarantine in Arizona, Ezinma was in New York to shoot a video, rehearse and record when we talked a couple of weeks ago. But she said she may not be there long.

“I might come back home because I’m not performing now,” she said. “I love Lincoln so much and I miss it.”

The concert by the Texas country singer would have been the first major show in Lincoln since March.

L. Kent Wolgamott: 'Save Our Stages Act' could save independent music venues

While Lincoln -- unlike say Iowa City, Chicago and Austin -- hasn’t yet lost a venue to the virus, it could happen here soon -- and is almost certain if the clubs can’t bring back shows until well into 2021.

Lincoln native Ezinma will release her debut single "Beethoven Pleads The Fifth," a classical violin and hip-hop mix on Friday.

Ezinma (second from right on violin) plays with Beyonce at Coachella in 2018.