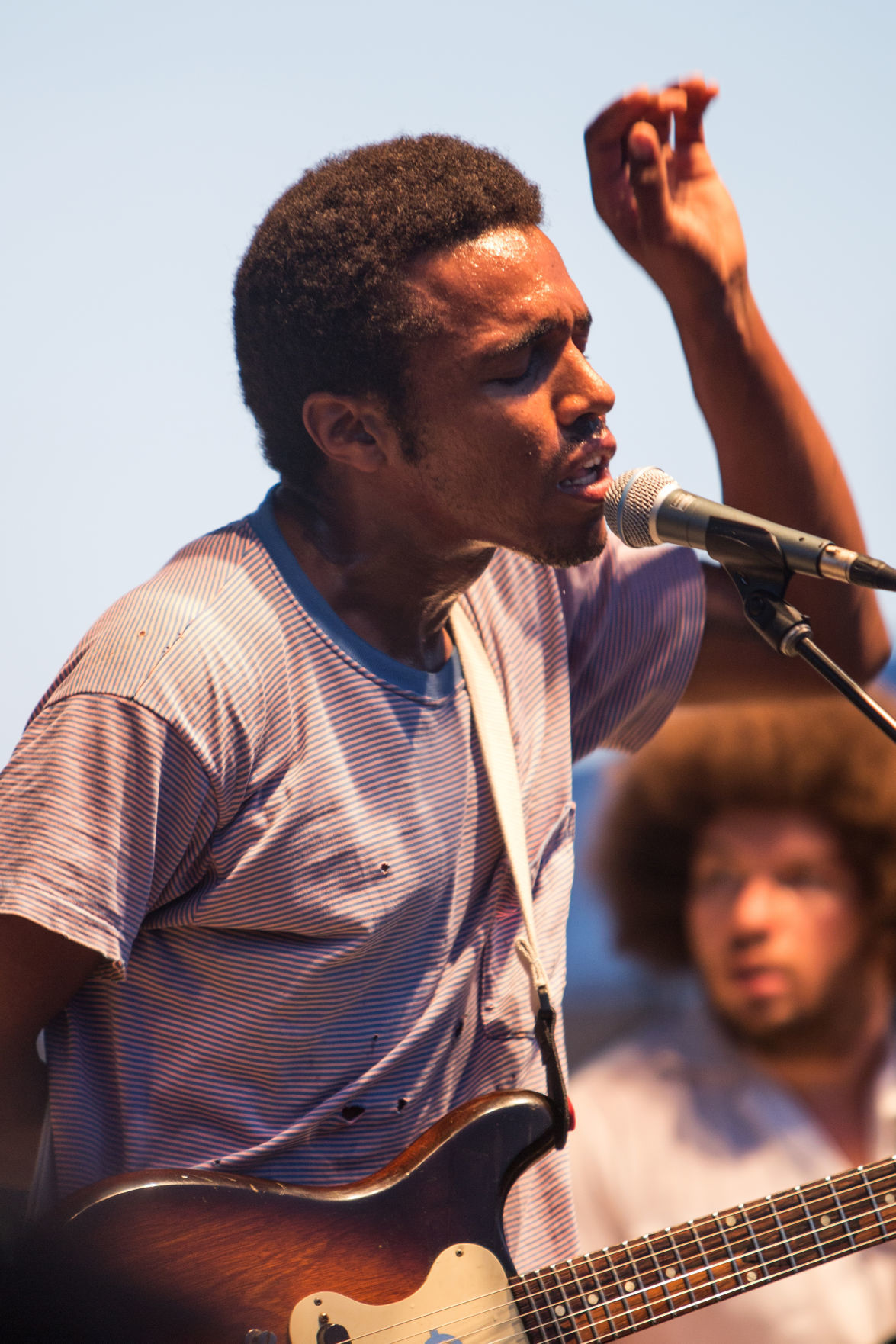 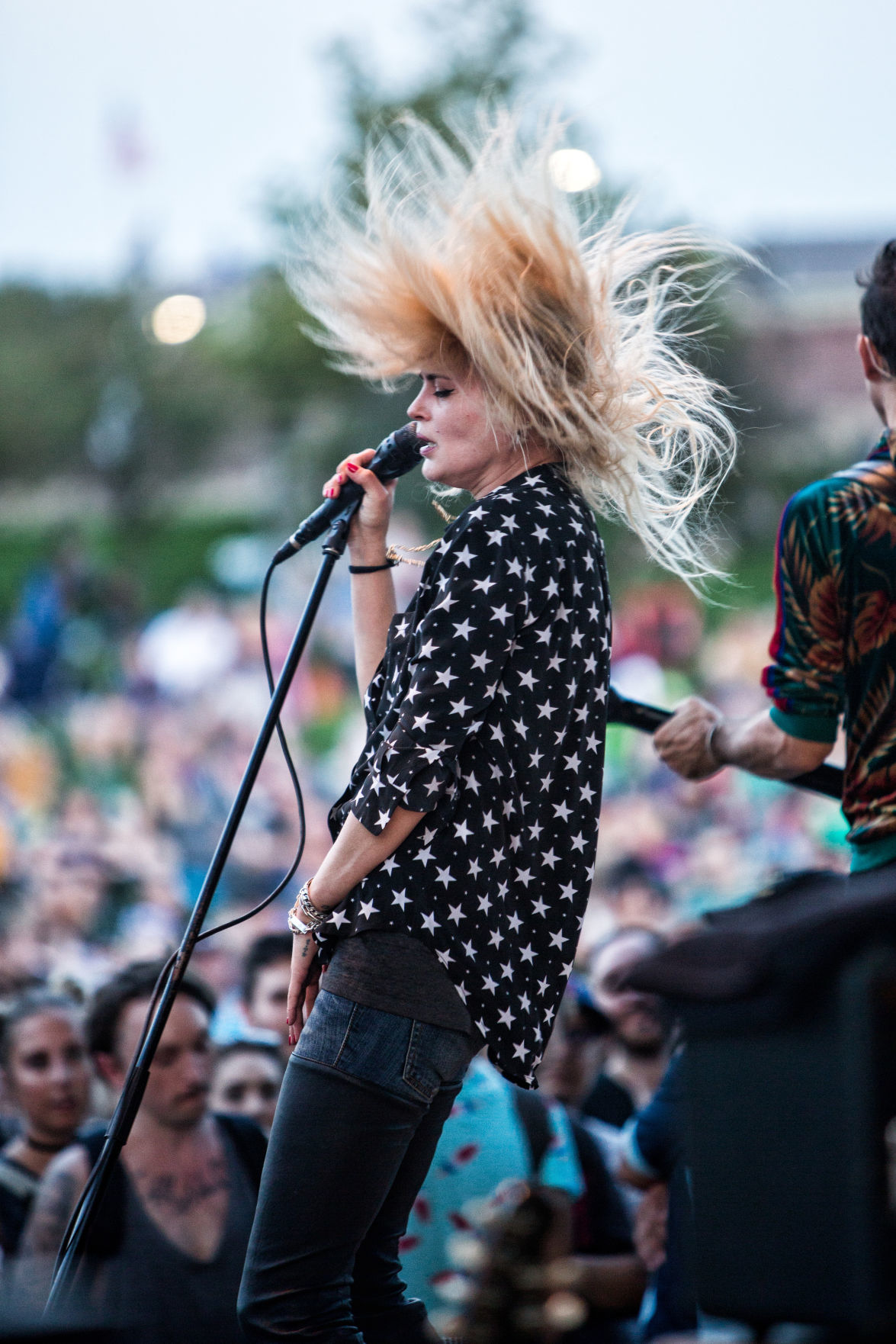 The Kills' Alison Mosshart gave her microphone a workout at Maha. 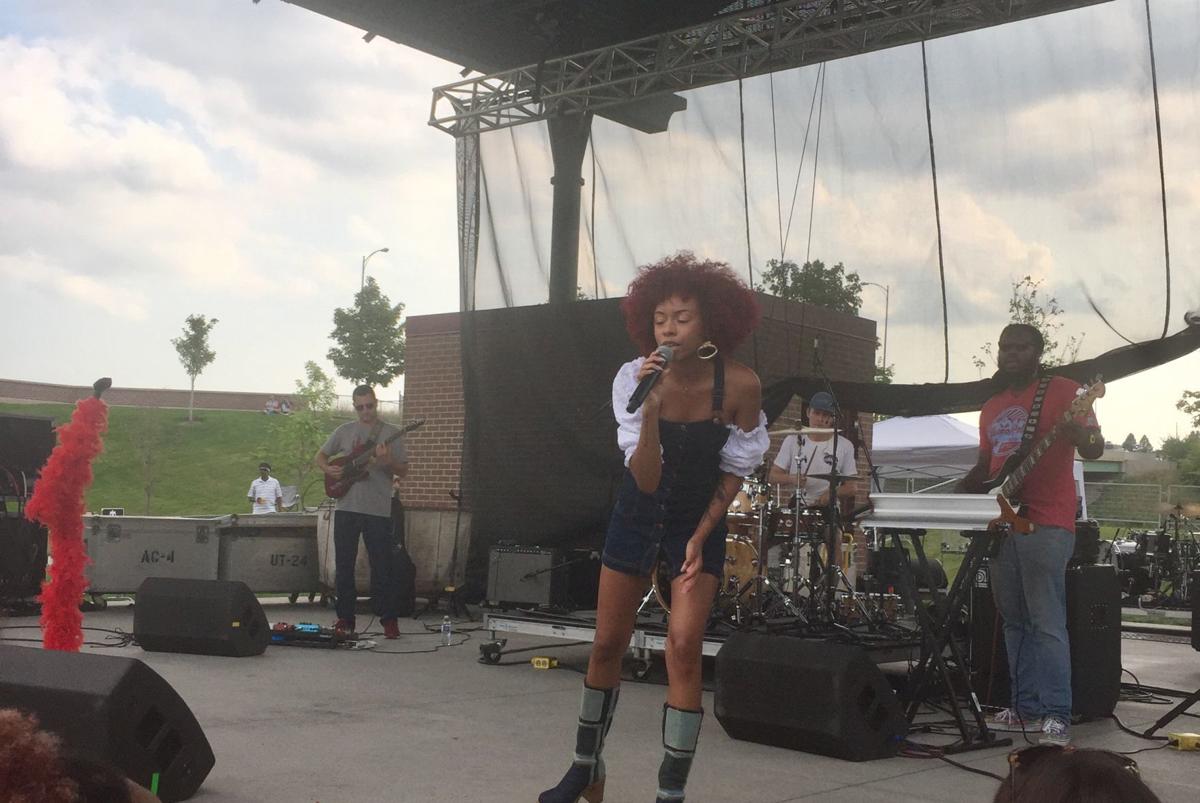 Ravyn Lenae performs at the Maha Music Festival in Omaha on Saturday.

OMAHA — At every festival I attend I hope to see at least one great set in a day — which doesn’t always happened.

At last weekend’s Maha Music Festival, however, I saw three great sets and one very good one — which meant, in my way of judging things, the 10th year of the indie-rock-focused fest was a hit.

Friday's great set came from Benjamin Booker, the young New Orleans guitarist, who has brought to his recordings a mixture of soul, blues and garage rock.

Live, Booker and his three-piece band fused those sounds into a propulsive mix. Booker is a dynamic guitarist and energetic performer — and he’s got a raspy soul voice that, to pick one example from his 50-minute set, was on full display during a crying ballad, which was followed seconds later by a cathartic rocker.

Friday’s closer, TV on the Radio, was very good — the indie-progsters running through an energetic 90 minutes of the “hits" (I’m not sure any of the songs qualify as hits, but if you like TOTR, they were all the songs you wanted to hear). The only thing that kept the set from being great was it wasn’t the visual spectacle that I associate with the band, likely because of the outdoor festival setting.

On Saturday, the first superb show came from Ravyn Lenae, and the second a couple hours later from The Kills.

The 19-year-old Lenae, a rising neo-soul star, was even better Saturday than she was opening for SZA at the Bourbon Theatre last year. A great singer with an amazing range — she can really work the high stuff — she’s got a solid band and some very good songs, including “Sticky,” her biggest “hit,” and the set closer, the house-music dancer “Free Home.”

A couple minutes before The Kills took Maha’s smaller stage, a crew guy secured the microphone that would be used by Alison Mosshart to its cord with a lot of electrical tape. For good reason, that mic got a serious workout from the start to finish of The Kills’ energetic hour of intense blues-psychedelic garage rock.

It started when Mosshart began throwing her head and hair around on the first song and continued through guitarist Jamie Hinze using the stand, with mic attached, as a slide while playing the blues solo on “Monkey 23,” the closing number of the cathartic set that was the most exciting and intense of the weekend.

Some other Maha observations:

Weekend is the key word to describe Maha 2018 — the first time the festival ran two days (actually Friday evening and all day Saturday). It drew good crowds, more than 6,000 Friday and close to 8,000 Saturday.

Mesonjixx, Lincoln’s 2018 Maha entry, acquitted itself quite well in the not-so-prime-time 3 p.m. Saturday slot. That meant their set was sparsely attended compared with the thousands that turned up later in the day, and they played when the afternoon was at its hottest.

That, however, didn’t seem to phase them, during the 2/3rds of the set I caught, as they brought their jazzy brand of neo-soul with class and confidence and some fine vocal stylings from Mary Elizabeth Lawson.

Spotted in the crowd

Among those who got a good dose of Booker’s blues/soul/garage rock was Gov. Pete Ricketts, who was standing out about 20 yards from the stage. We had a brief conversation about the need for earplugs, not so much for Booker but ZZ Ward, who was about to take the main stage. The governor assured me he had a pair in his shirt pocket.

I overheard a conversation about Tune-Yards and its eclectic sound that mixes vocals, ukulele, loops and pedals and thumping bass and drums — “It sounds like an Atari ate ‘The Lion King’ soundtrack.”

Aretha Franklin passed the day before Maha and perhaps two bands paid tribute to the Queen of Soul in their Friday sets.

Midway through their last song, Booker and the band broke into a Bo Diddley beat vamp, and he began a call-and-response chant that sounded to me like “Hey Aretha" — but he very well may have been saying something else.

There was no doubt Franklin got a memorial tribute from TV on the Radio, which made a striking version of “Think” its penultimate song.

A lesson I’ve learned after decades of going to festivals: Once you’ve seen a transcendently great set and it’s relativity late, go home. You’re not likely to see anything even close to as good.

Nebraska has a long tradition in popular music of all genres. Take a look at some of our favorite songs that highlight the state and its many …

20 shows, performers and venues — a Ground Zero trip through 20 years of music

Each year's best: Wolgamott's favorite albums and concerts each year since 1998

Ground Zero, the Journal Star's entertainment magazine, invites readers to celebrate its 20th anniversary next weekend at a festival that will…

In January 2016, 13 years after the death of his singing partner Bobby Hatfield, Bill Medley decided it was time to bring back The Righteous B…

Jason Mraz calls the tour that he’s bringing to Lincoln Thursday “Good Vibes.” But he very well could have titled it “Know” — for the album of…

The Kills' Alison Mosshart gave her microphone a workout at Maha.

Ravyn Lenae performs at the Maha Music Festival in Omaha on Saturday.