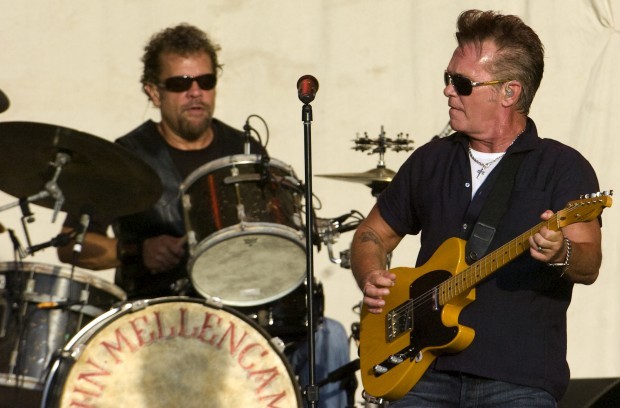 John Mellencamp performs in the No Better Than This Tour at Haymarket Park on Sunday, Aug. 8, 2010. (GWYNETH ROBERTS / Lincoln Journal Star) 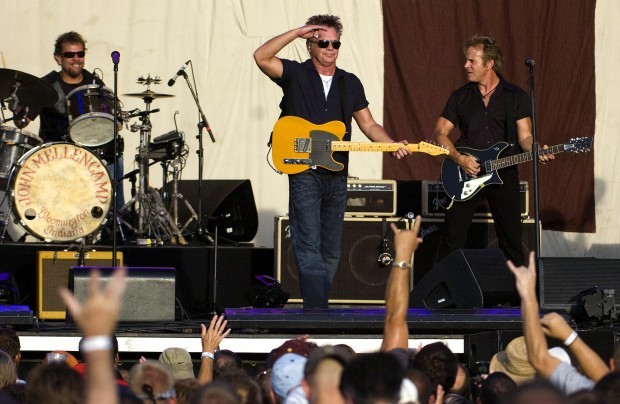 John Mellencamp walked onto the stage in center field Sunday, looking into the sun through his shades, and kicked off "Pink Houses." About 80 minutes and 22 songs later, he and his band walked slowly back to their buses in the Haymarket Park parking lot.

They were drenched with sweat. It was 96 degrees and felt like 110 when they started. By the end of the set, it had cooled off to a mere 92 that felt like 106.

But the heat didn't put a damper on Mellencamp's show -- or on the crowd, which filtered out of the grandstand to pack the area in front of the stage while he played.

Because of the spread-out nature of the ballpark show -- stage in the outfield, the infield blocked off to spectators and the grandstand mostly full before Mellencamp started, it's hard to guess how many people came out Sunday evening.

But Bob Dylan's second Haymarket Park concert drew a good crowd, and with a ticket deal that allowed kids to enter free with an adult ticket holder, it was a true all-ages affair. It also drew folks from Iowa to Wyoming.

The setup for the show was essentially the same as that when Dylan and Willie Nelson played Haymarket in 2004, the first year of Dylan's now annual tour of minor league ballparks.

Mellencamp's previous Lincoln appearance was also in an athletic arena, a much bigger stadium.

"The last time I played here I think it was Farm Aid about 100 years ago," Mellencamp told the audience. "I remember on my airplane it was me, Lou Reed and John Prine. What a bunch of guys."

It was actually 23 years ago, but who's counting?

Dylan has been here many times. About 30 minutes after Mellencamp's set, he took the stage to a classical music introduction. The sun was down and the "poet laureate of rock 'n' roll" was back at work.

John Mellencamp performs in the No Better Than This Tour at Haymarket Park on Sunday, Aug. 8, 2010. (GWYNETH ROBERTS / Lincoln Journal Star)

John Mellencamp salutes the crowd after the opening song of the No Better Than This Tour at Haymarket Park on Sunday, Aug. 8, 2010. (GWYNETH ROBERTS / Lincoln Journal Star)
© Copyright 2021 The Lincoln Journal Star, PO Box 81869 Lincoln, NE | Terms of Use | Privacy Policy
Powered by BLOX Content Management System from TownNews.com.
You don't have any notifications.