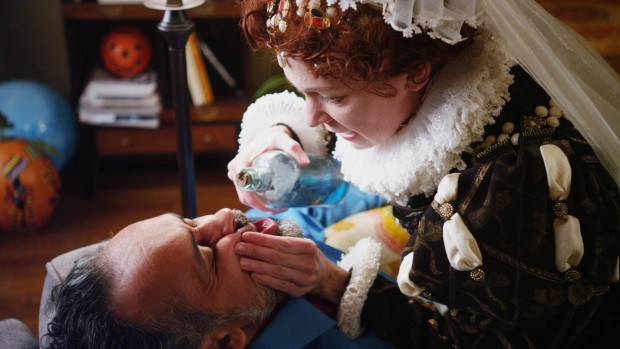 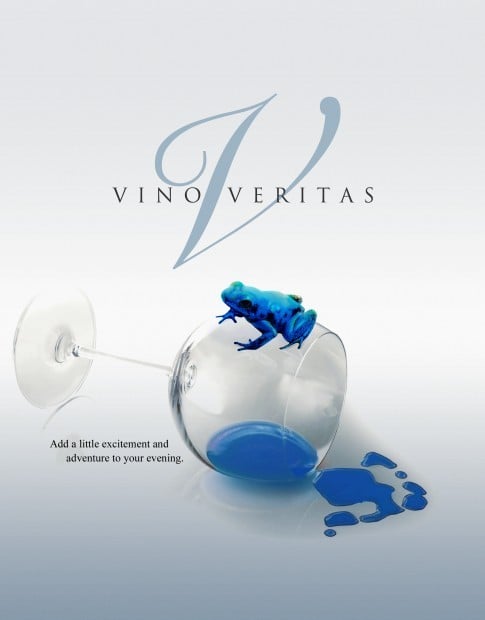 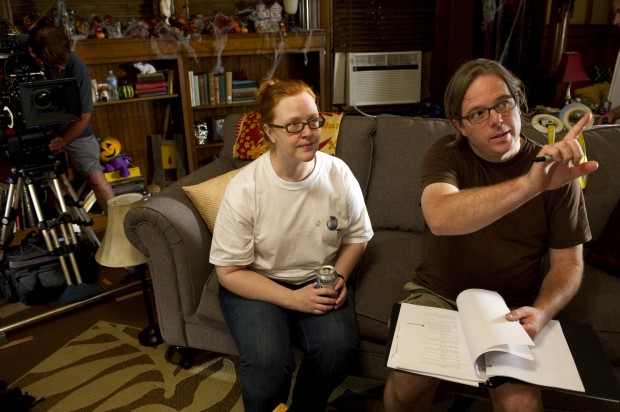 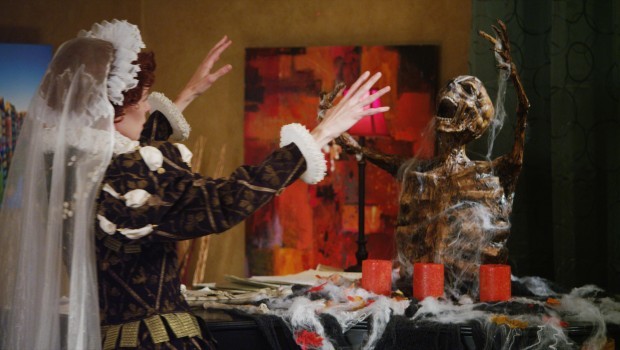 Claire (Carrie Preston) comes face to face with a skeleton from a scene in Sarah Knight's "Vino Veritas." 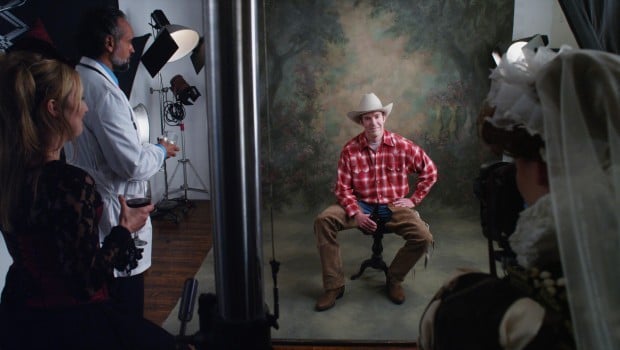 Brian Hutchison waits on set in his Halloween cowboy costume for a scene from "Vino Veritas." 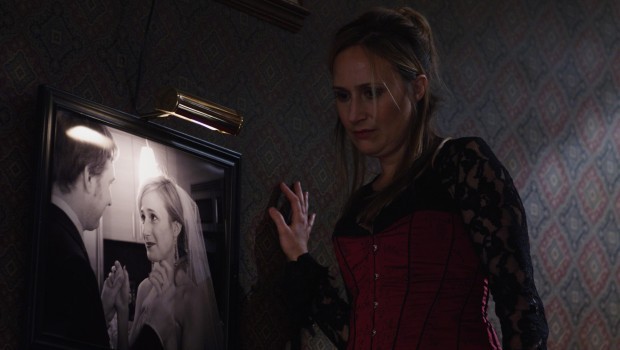 Lauren (Heather Raffo) gazes at her wedding portrait in a scene from "Vino Veritas."

Media reports say the actress is close to a deal to reprise her character in “The Good Wife” -- she plays quirky genius attorney Elsbeth Tascioni -- in multiple episodes next season. She scored an Emmy nomination -- her first -- for the role as outstanding guest actress in a drama series.

And this week you will see her on the big screen in an independent film shot in Lincoln in 2011.

Knight, who grew up in Lincoln and graduated from Lincoln High School (1987) and the University of Nebraska-Lincoln (1991), will attend Friday, Saturday and Sunday showings.

With a screenplay by Michigan playwright David MacGregor, based on his stage play by the same name, “Vino Veritas” is a dark comedy about two adult couples who gather in one couple’s home on Halloween night.

Their conversation turns interesting after they consume a primitive-looking bottle of blue wine from Peru. The wine acts as a truth serum, which results in an evening of unbridled honesty that affects their marriages and friendships.

The film also stars Bernard White (“The Matrix Reloaded”), Heather Raffo and Brian Hutchison. Knight shot the film in a quick 12 days during a blistering hot July in David Dale’s photography studio on South A Street.

“(The actors) all were so wonderful shooting under those time constraints, which are impossible anyway,” Knight said in a phone interview to promote the movie. “All four of them came so prepared.”

Knight is a stage and screen director in Los Angeles and New York City, whose resume includes documentaries and music videos. She has her mother to thank for “Vino Veritas” as her first feature film.

Sarah’s mother found the production so enjoyable that she went multiple times.

"This was atypical for her," her daughter said during filming in 2011. "She doesn't find material that she's passionate about very often. But when she does, she will go repeatedly."

Sharon Knight was so enamored with the play that she sent her daughter the script, saying she thought it would make a great movie.

"As a typical director and producer, it took me a long time to get to it," Knight said.

When she finally did, she, too, thought it had movie potential. She liked the play's humor, how well MacGregor juggled comedy and drama and how he wrote dialogue. She also liked how the material would target a specific audience.

"So many indie films are about kids in their 20s," she said. "This is a real, adult comedy drama."

Soon after reading it, she met with MacGregor, who premiered the play in 2008 at Jeff Daniels' Purple Rose Theatre in Chelsea, Mich.

Knight wanted to film the movie in her hometown, specifically at Dale's photography studio, which is in a giant house in Lincoln's Near South neighborhood.

"I drove by it every day of my childhood," she said. "In my mind, this is where the characters lived."

She contacted Dale, who was open to the idea, but Knight was unsure she could do it in Lincoln because of the expense. She could film it for less in Los Angeles.

So Dale called his friend Michael Murman, who is chairman and founder of Pen-Link, a Nebraska software company. He also started Glacial Till Vineyards, which he operates with his two sons near Palmyra.

"A couple of things appealed to me about it," Murman said at the time. "I liked that Sarah wanted to do it in Nebraska and that the film had a focus and connection to wine."

So Murman agreed to finance the project. And now, having seen the final version, he said he made a wise investment.

“I’m not a movie critic,” he said. “Movies are kind of like drinking wine, some you like, some you don’t. I was pleasantly surprised. It turned out better than I thought it might be. The story is interesting. It keeps you interested.”

Dale, too, enjoyed the film. So much so, he left the furniture in the house, which doubles as the family home, where the set designer moved it.

“It was really neat how hard everybody worked for Sarah on this,” he said. “Everyone was so professional on the set. They worked together so well and harmoniously.”

Knight provided 35 jobs during filming, including hiring three UNL film students in major positions. Hiring students was important to her.

“They did it for little money,” Knight said. “They just wanted the opportunity and the experience.”

“Vino Veritas” had its world premiere July 28 at the Woods Hole Film Festival in Cape Cod, Mass. After its Lincoln showing, Knight will take it in September to the Oaxaca (Mexico) FilmFest and the Wine Country Film Festival in Santa Rosa, Calif.

She also has an offer for digital distribution, meaning the film will be available soon through Amazon, Netflix and cable company on-demand services.

“Vino Veritas” takes its title from the Latin proverb that is literally translated “in wine, the truth,” turning that notion into a dramatic u…

Claire (Carrie Preston) comes face to face with a skeleton from a scene in Sarah Knight's "Vino Veritas."

Brian Hutchison waits on set in his Halloween cowboy costume for a scene from "Vino Veritas."

Lauren (Heather Raffo) gazes at her wedding portrait in a scene from "Vino Veritas."