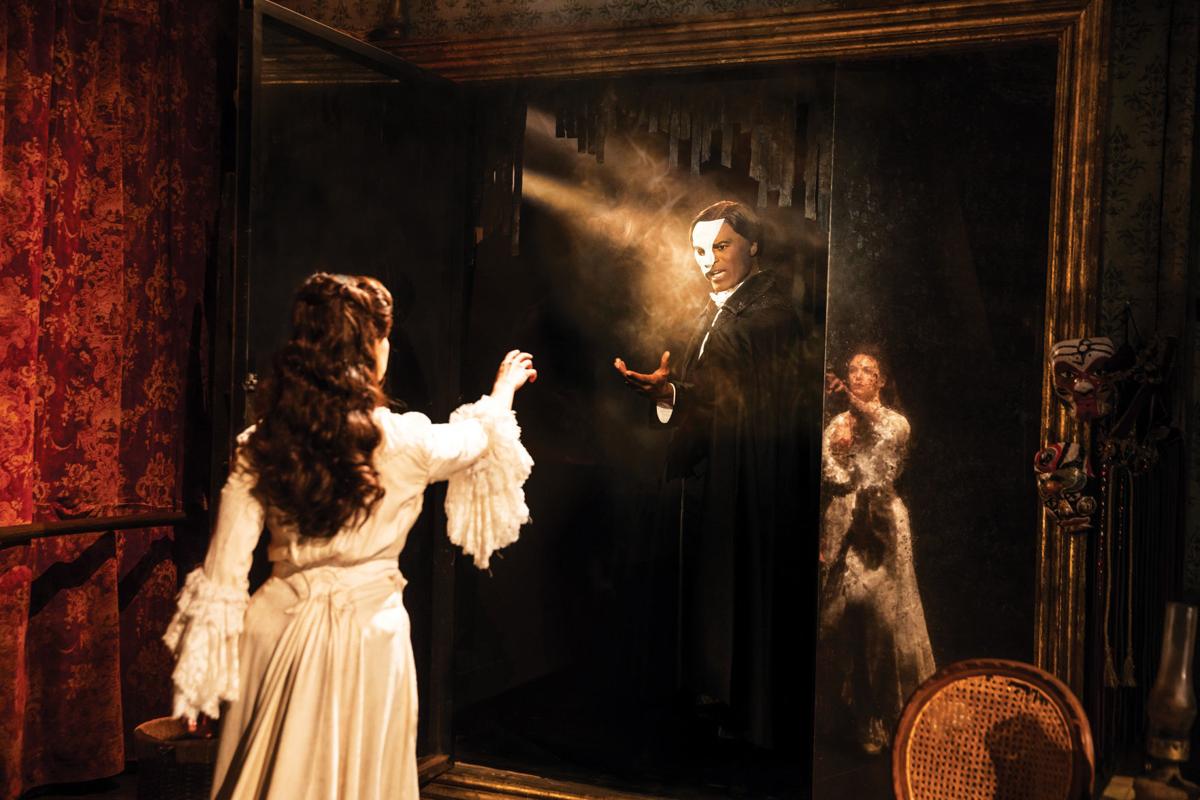 Emma Grimsley and Derrick Davis perform in a scene from "The Phantom of the Opera." 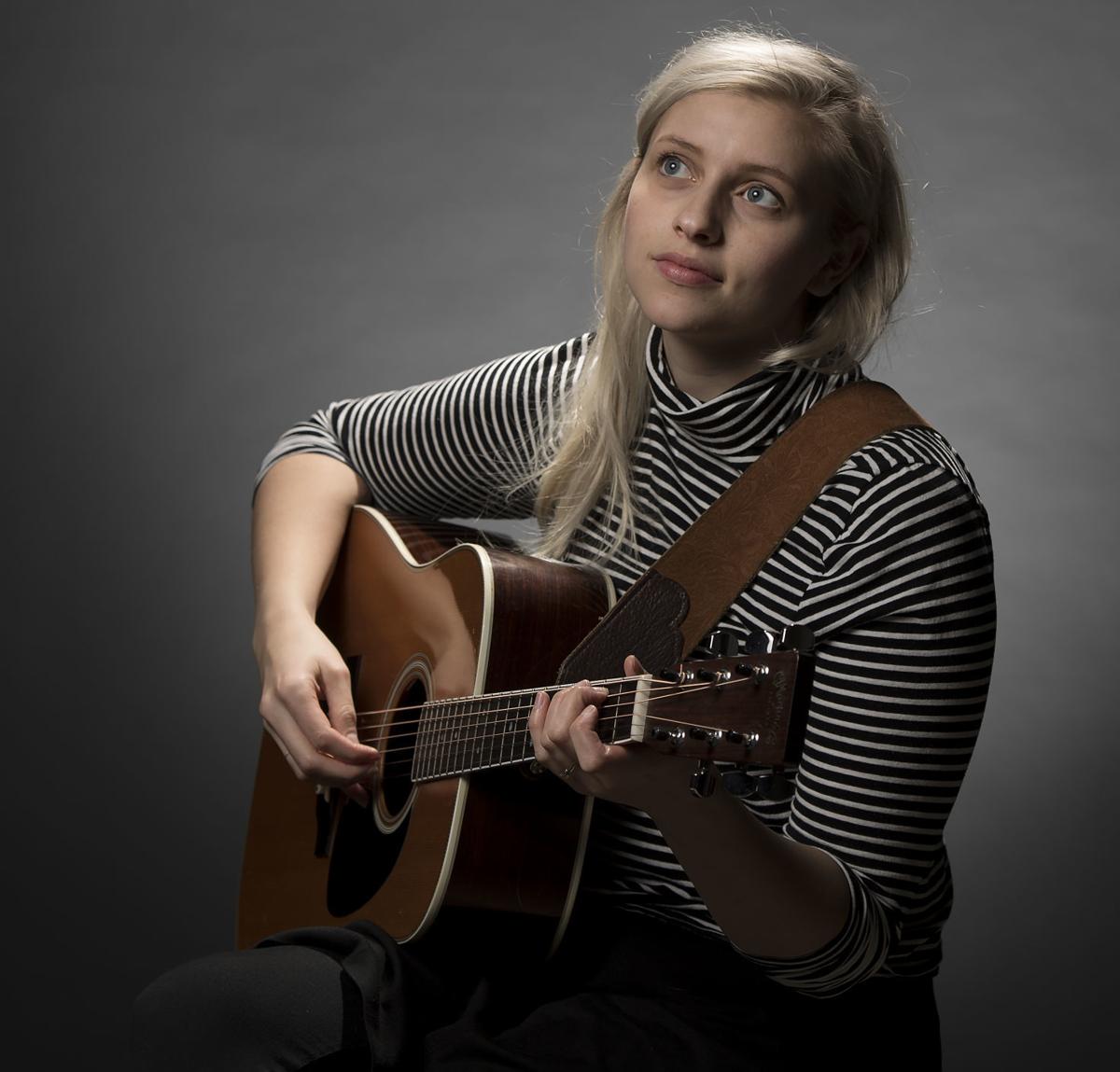 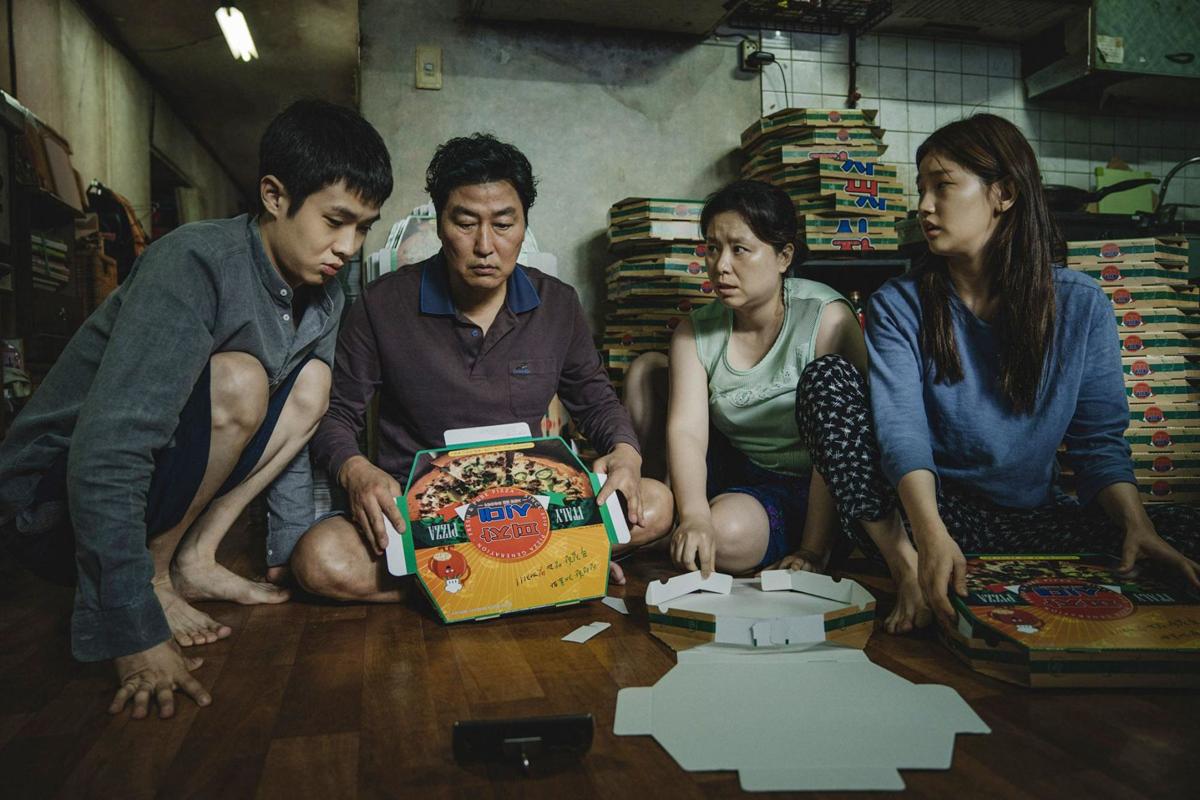 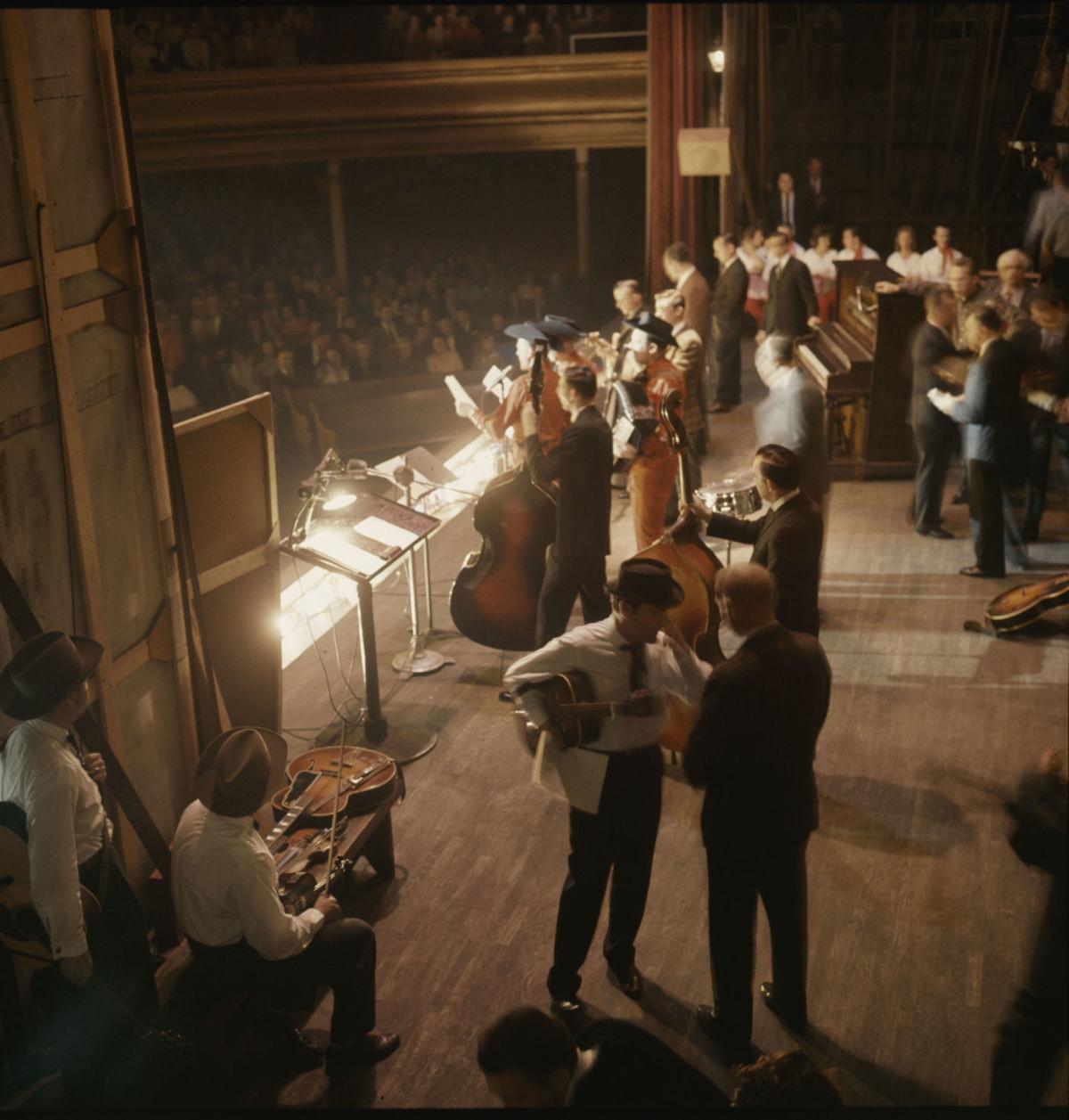 The Grand Ole Opry at the Ryman Auditorium, Nashville, circa 1960, from the Ken Burns series "Country Music" set to air on PBS in September. 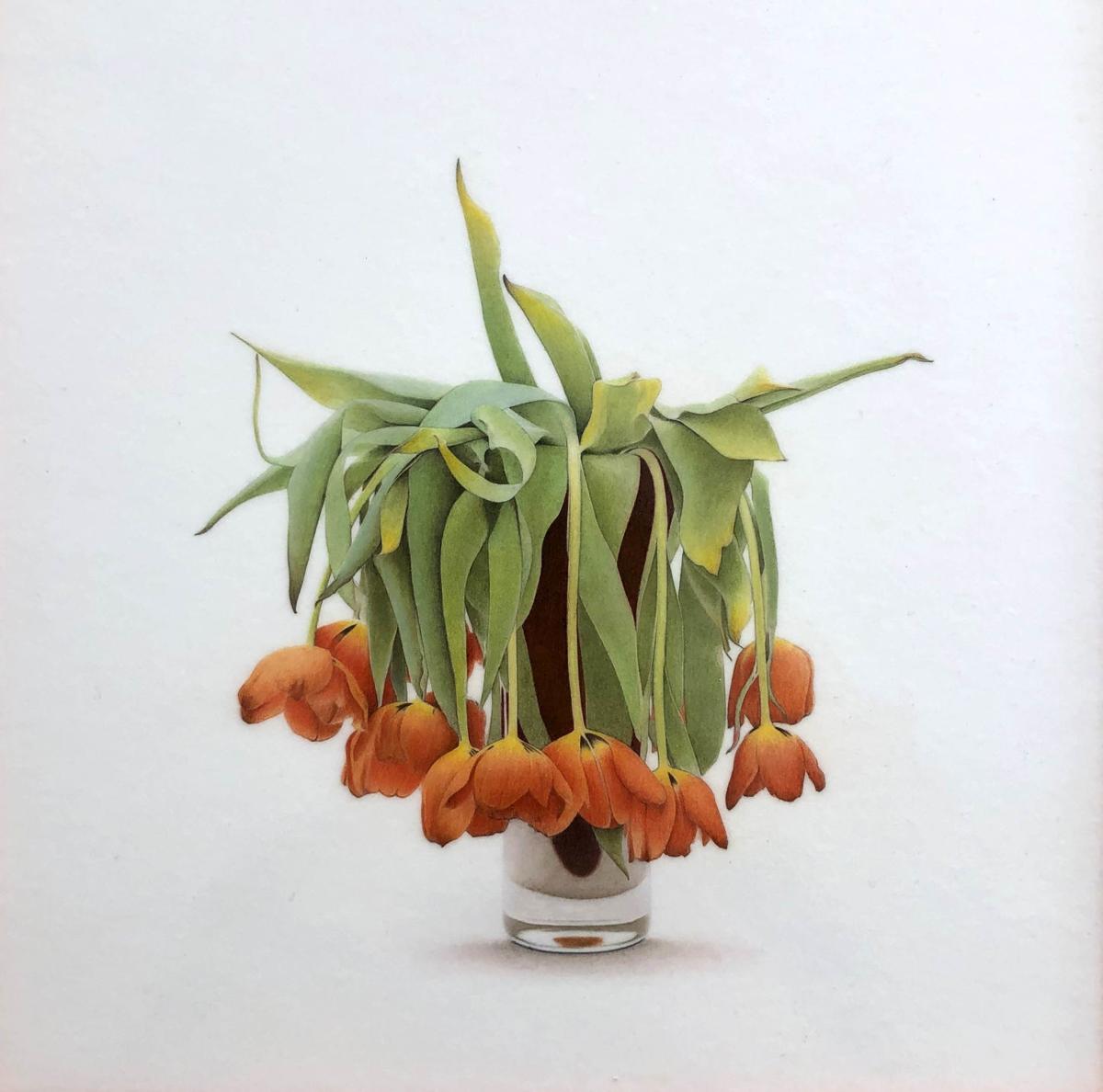 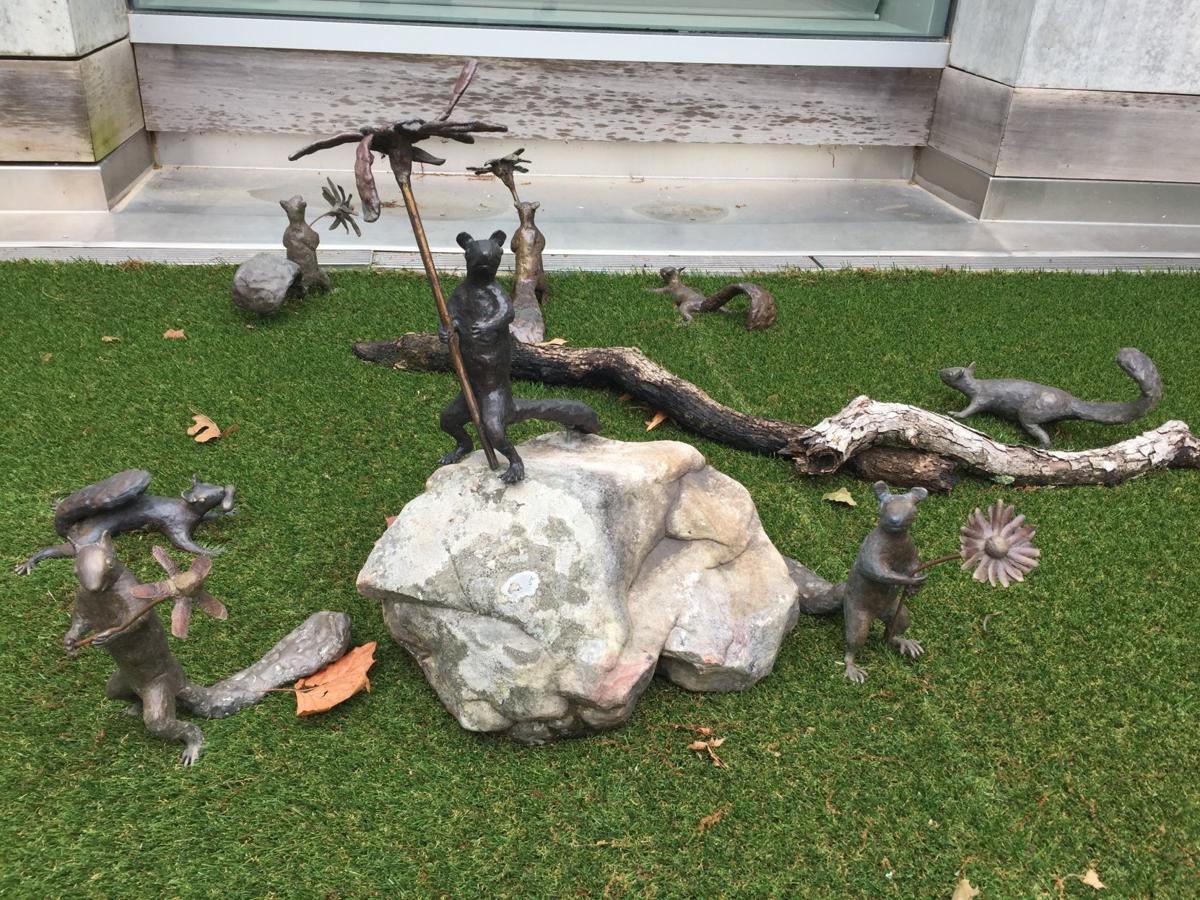 Some of Charley Friedman's "Squirrel Gang" installed at the Crystal Bridges Museum of American Art.

For years, cultural critic Greil Marcus has compiled a “Real Life Rock Top 10” list, arguing that we don’t experience art, movies, music, television, books or anything else in life in a silo. Rather, everything flows together or crashes into a jumble. In any case, real life is driven by that mix.

So, tapping into the long-held maxim that inferior artists copy and great artists steal, I’m shamelessly ripping off Marcus and here present my Real Life Rock Top 10 for 2019.

1. Bob Dylan at Pinnacle Bank Arena. I’ve been on the Bob Dylan bus since the ’70s, and I don’t think I've missed a Dylan show in Lincoln or Omaha since 1980. I’ve seen Bob and the various incarnations of his band elsewhere as well -- Lawrence, Denver, Kansas City, Austin pop to mind. So my best guess is that I’ve been to a minimum of 25 Dylan concerts. And his PBA show in October was one of the best I’ve seen.

Unavoidably a “lion-in-winter” performance by the 78-year-old, a seemingly rejuvenated Dylan and his revamped band delivered a show that mixed classics with less familiar songs. As always, it was rearranged for freshness and challenged with Bob in great voice, playing guitar and piano. Lincoln was lucky to get one of the shows on the short, college-oriented tour that got raves across the country. And I feel fortunate to have seen it.

2. Charley Friedman “Squirrels” at Crystal Bridges. In May, I flew down to Bentonville, Arkansas, to see Lincoln artist Charley Friedman’s “Squirrels” during its final weekend of installation at the Crystal Bridges Museum of Art. I was familiar with the work -- a community of cast bronze squirrels -- having seen a few of the little creatures in Friedman’s studio and an installation at the Museum of Nebraska Art in Kearney. But seeing them in the prestigious museum, which held works by artists from Gilbert Stuart to Willem de Kooning, was unforgettable.

3. “Parasite.” When the Ross Media Arts Center screening of “Parasite” ended, I turned to Daily Nebraskan critic Kyle Kruse, sitting a row behind me, and said “Holy s***.” That’s the best measure of the immediate impact of Korean director Bong Joon Ho's film. A month later, “Parasite” is still sticking with me -- a stunning tale of class conflict, deception and chaos perfect for our time and the best movie I saw this year.

4. Amazon Music HD. As the music business has moved from physical product to streaming, I’ve had one real complaint -- the sound quality of the music on most streaming services is subpar at best, inferior at worst. Enter Amazon HD, which I’ve had since it was rolled out this fall. It, like Tidal, has CD-quality sound or better, with something they call Ultra HD. Neil Young, who tried his own high-quality service, has endorsed Amazon HD.

5. "Country Music" on PBS. Ken Burns’ “great-man” technique, focusing on the likes of the Carter Family, Jimmy Rodgers, Hank Williams, Johnny Cash, Patsy Cline, George Jones, etc., to craft the story of country music was criticized by some of my critical brethren for exclusion of important players and events and over-crediting some of those he featured. But Burns’ approach makes for good, accessible television. And, by and large, he captured the history and heart of America’s music quite well.

My fears, to say the least, were unfounded. “Phantom” set a Lied attendance record at more than 28,000 ticket holders -- and I was blown away by the innovatively staged, impressively performed production, led by Derrick Davis, who now is The Phantom for me.

7. Francisco Souto, “Diaspora.” In 2016, Francisco Souto made the drawings that became “A Memory in Peril,” his first exhibition of work reflecting the plight of his native land, Venezuela. “Diaspora,” his third Venezuelan series, was another striking step forward, with his meticulously drafted colored pencil drawings, layered to luminosity and uniquely encased in boxes emblazoned with the Venezuelan national colors.

8. Pinewood Bowl. This is cheating a bit, but Pinewood Bowl has become a showcase for top-quality concerts. This year, those shows ranged from The Avett Brothers, Tenacious D, Willie Nelson and Alison Krauss, Weird Al Yankovic and Steely Dan. That’s a lineup almost as impressive as the Pioneers Park amphitheater, which, over the last decade, has become my favorite place to see a show.

9. “Amazing Grace.” The only movie I saw twice in a theater in 2019 was the documentary on a pair of 1972 Aretha Franklin concerts that were abandoned because of “technical issues.” The concerts were only completed with new technology that allowed the sound and pictures to be synced together. The resulting film is a gospel concert for the ages, with a 29-year-old Franklin, the greatest singer of the last 60 years, at the peak of her form, returning to the church music she grew up on and joined by a choir.

10. Andrea von Kampen Welsh hardware store ad goes viral. In February, I talked with singer-songwriter Andrea von Kampen about her superb debut album “Old Country,” her touring and the fact that she’s the Lincoln artist who has most successfully negotiated the new music world of streaming and touring.

Then, in December, she became the biggest entertainment hit of the year from Lincoln when an advertising video for a Welsh hardware store for which she supplied the music, an acoustic version of “Forever Young,” went viral. It amassed more than 2.5 million YouTube views. Wow.

After two songs at Pinnacle Bank Arena on Saturday, Bob Dylan put down his guitar, walked over to an upright piano, pulled up the microphone a…

BENTONVILLE, Ark. — Charley Friedman knelt on the synthetic turf, gesturing toward a squirrel a foot away, describing the positioning of its t…

With its famous chandelier hanging over the audience, a revolving 24-foot-high drum that opens to reveal new sets and scenes, Tony Award-winni…

With the 14 pieces in “Diaspora,” his Kiechel Fine Art exhibition, Francisco Souto returns to his examination of the humanitarian tragedy taki…

In 1972, Aretha Franklin went into the New Missionary Baptist Church in the Los Angeles neighborhood of Watts to record a gospel album.

All 10 movies on my list certainly meet the definition of “cinema,” even if only three made the box office top 30 -- proof that quality and popularity have little to do with each other.

There is, to my way of thinking, a difference between the best movie of a year or a decade and favorite films. Ranking the former is nearly im…

For each of the six major categories, we've got a picture or performance that should win, along with the “Will win” prediction.

See the powerful performances from the BET Awards

Emma Grimsley and Derrick Davis perform in a scene from "The Phantom of the Opera."

The Grand Ole Opry at the Ryman Auditorium, Nashville, circa 1960, from the Ken Burns series "Country Music" set to air on PBS in September.

Some of Charley Friedman's "Squirrel Gang" installed at the Crystal Bridges Museum of American Art.