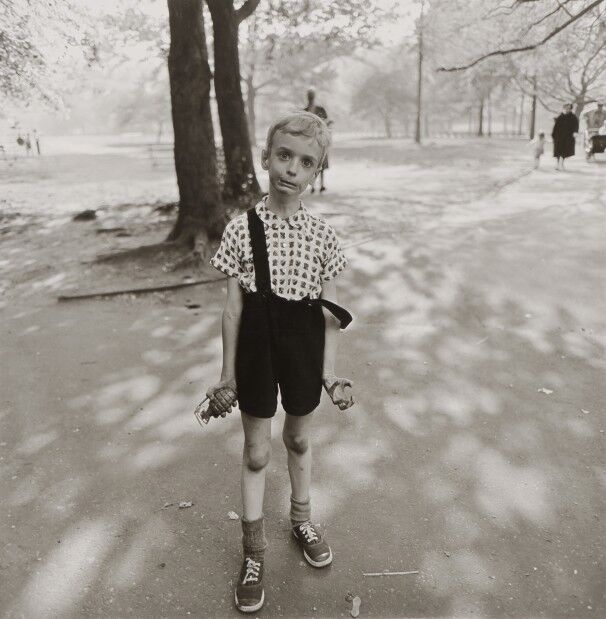 Diane Arbus' iconic "Child with a Toy Hand Grenade in Central Park, N.Y.C.," 1962, is on view at Sheldon Museum of Art as part of the exhibition "Person of Interest." 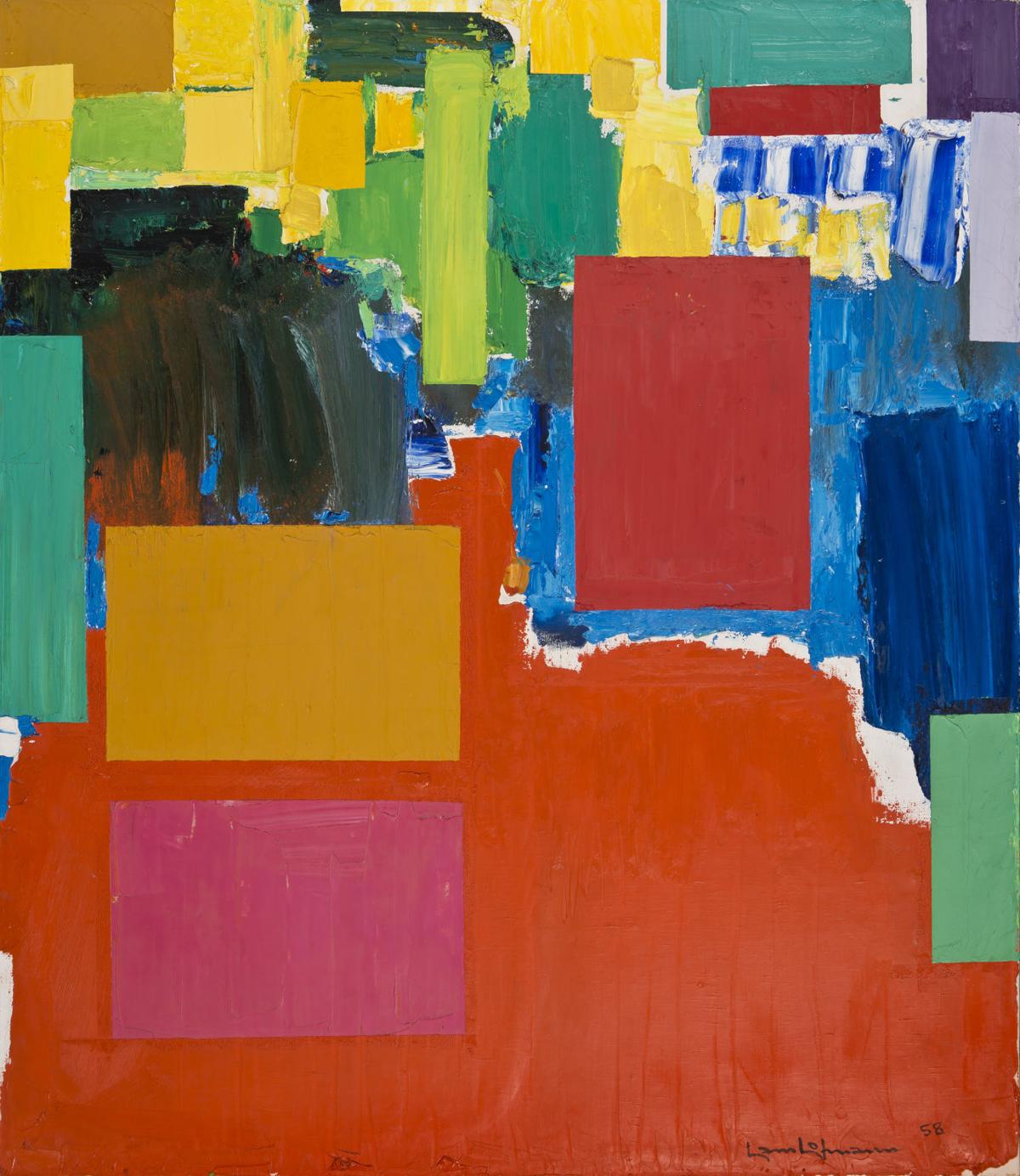 "The City," a 1958 painting by Hans Hofmann, is on view in "Sheldon Treasures" at the Sheldon Museum of Art.

I was in one of the upstairs galleries at the Sheldon Museum of Art on Tuesday when I got the alert on my phone that the Big Ten had canceled fall sports — a decision that illustrated the dichotomy between safety and returning to “normal” that will, unfortunately, continue to hold arts and entertainment in limbo for months.

The University of Nebraska-Lincoln museum reopened Tuesday after being shuttered since the coronavirus pandemic hit in March.

As I looked at “Person of Interest,” the stimulating exhibition that fills the entire second floor, I recalled my late January conversation with Sheldon executive director Wally Mason and curator Melissa Yuen, putting some thoughts about the show I’d intended to write about five months ago.

That continued downstairs in “Sheldon Treasures” where Alexander Calder’s 1952 mobile “Sumac II” hangs across the gallery from Hans Hofman’s 1956 abstraction “The City,” one of my favorite works in the Sheldon collection.

Even masked up, with hand sanitizers set up around the building, going back into the galleries felt normal.

In sharp contrast, the Big Ten’s decision ripped away any semblance of normal for Nebraska athletics and Husker football — the most popular and lucrative form of entertainment in the state.

Make no mistake, sports are entertainment — unless you’re one of the athletes and coaches directly involved. To them, it's their lives and livelihood.

Unlike, say, a movie or play, the outcomes of sporting contests aren’t determined beforehand. In addition, the passion sports stir in its fans isn’t much different from that of music fans.

And all of those without instruments or helmets and shoulder pads are spectators. They put up their cash or sit through the commercials at home to be entertained.

So Lincoln’s largest venues — Memorial Stadium, Pinnacle Bank Arena and the Devaney Sports Center — will sit empty through the rest of the year, the shutdown wreaking havoc on the Athletics Department's bottom line, not to mention the local economy.

While the Huskers are sidelined, two other UNL institutions will be leading the way in reintroducing performing arts and movies to Lincoln.

In September, the Lied Center for Performing Arts will begin its 2020-21 season with Step Afrika!, an African-American step dancing company; “Wisteria,” a collaborative narrative and musical developed by UNL English Professor Kwame Dawes; and the political comedy troupe The Capitol Steps.

Capacity at the Ross and the Lied will be reduced with at least 6 feet of distance in seating and masks required for all in the building, save the performers. So it won’t quite be “normal,” but it will be close enough.

Things get more complicated for shows in theaters and clubs. There are a few shows set for the Rococo Theatre, Bourbon Theatre and The Royal Grove in September and October. My guess is they’ll all likely happen.

But, because of varying restrictions on venues across the country and reduced capacity everywhere, touring won’t get back to “normal” before next spring at the earliest.

If, however the dire predictions of independent music venues going under for good because of the shutdown, “normal” as we knew it before March may never return.

It's time to adjust to the new normal and, if you want to get out from in front of a TV screen or computer, take advantage of the live entertainment being safely offered or go look at some art in person.

I can tell you from seeing The Beach Boys at Pinewood Bowl and visiting Sheldon, it feels good.

It almost makes you forget the pandemic.

Creed Fisher is one of the club-level artists who are trying to tour during the pandemic.

In the early ‘80s, The Morells were Zoo Bar fixtures, driving up from Springfield, Missouri, for three-night weekend rock ‘n' roll dance parti…

The heavy-metal band will be the third drive-in show hosted by the Event Center this summer, following Garth Brooks and Blake Shelton. Interested?

Ross theater to bring movies back to Lincoln Aug. 21

Matthew Erb blew into the tuba he held in one hand, sometimes stopping to take a sip of the beer in his other hand, before lowering to the gro…

Blixt: Growing goodness with the arts in Lincoln

SouthPointe Cinema and East Park Cinema will open Aug. 28. Marcus did not announce an opening date for the Edgewood Cinema.

The Lied Center for Performing Arts has presented a series of dance recitals for local studios with some of the performances bringing in more than 500 people.

Up and coming local musician Noah Floresch has released a new EP titled "A Book of Stories," which he hopes can both bring a smile and catch the limelight during a dry spell for the music industry.

”1867 Bar is potentially looking at closing their doors for good if another shutdown happens,” Kenny Barz said. “This individually affects not only the hip-hop community but us as Nebraskans … because we need to look out for one another.

The Zac Brown Band’s latest hit, “The Man Who Loves You The Most,” is about to take on new meaning for the group’s multi-instrumentalist Clay Cook.

Working with the Lincoln-Lancaster County Health Department, a plan was developed to be able to hold the series in the park along Antelope Creek east of downtown.

Concerts will be back next year -- lots of concerts, Pinnacle Bank Arena manager says

How many shows are too many shows? It’s a question that promoters and venues have to ponder as they start lining up concerts for next year.

Diane Arbus' iconic "Child with a Toy Hand Grenade in Central Park, N.Y.C.," 1962, is on view at Sheldon Museum of Art as part of the exhibition "Person of Interest."

"The City," a 1958 painting by Hans Hofmann, is on view in "Sheldon Treasures" at the Sheldon Museum of Art.