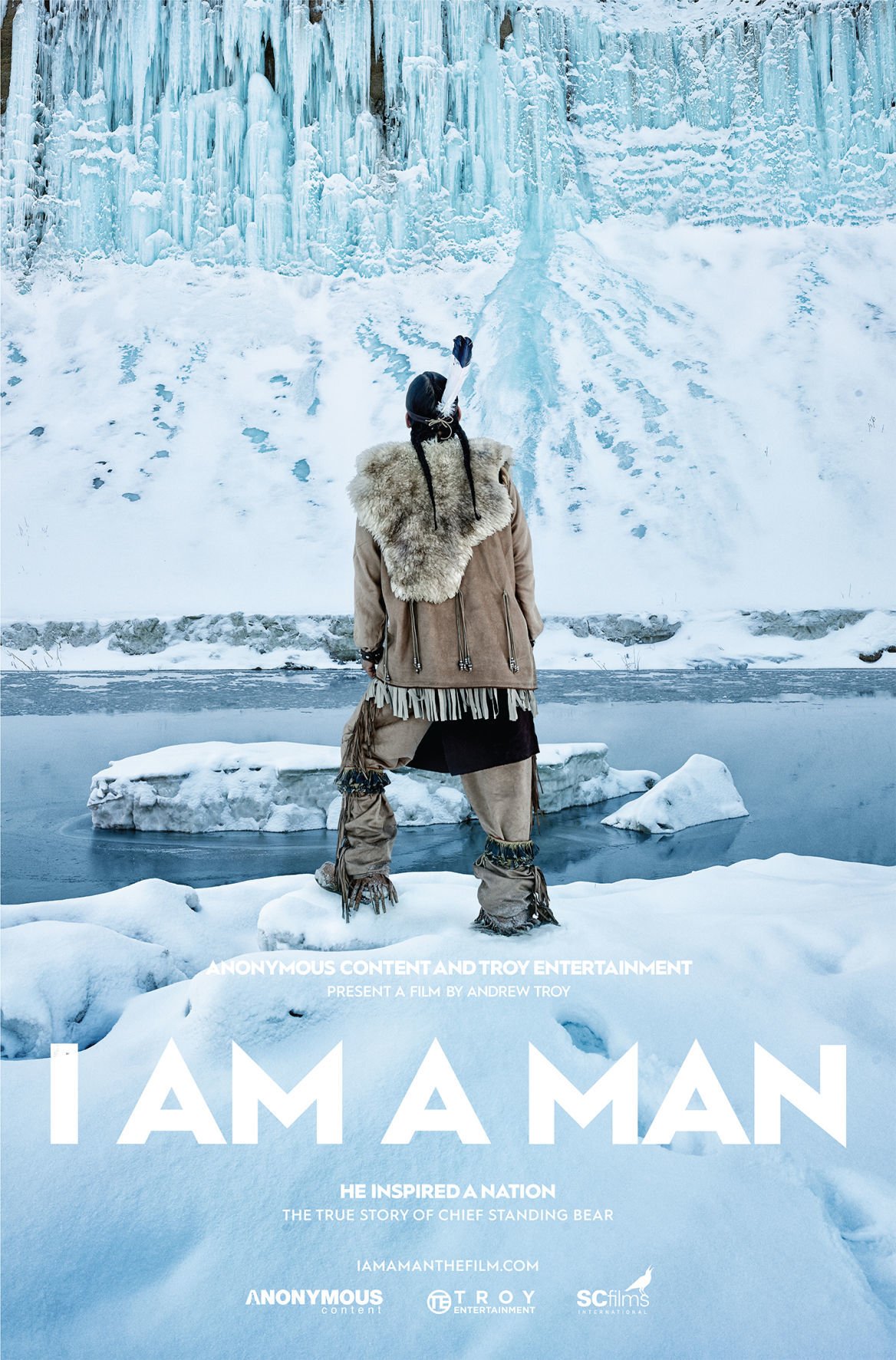 This teaser poster for the film "I Am A Man," depicts Chief Standing Bear at the Niobrara River, looking at the chalk cliffs where he is to bury his son. Taken by acclaimed photographer Jim Krantz, the picture has won prizes in national and international photography contests. 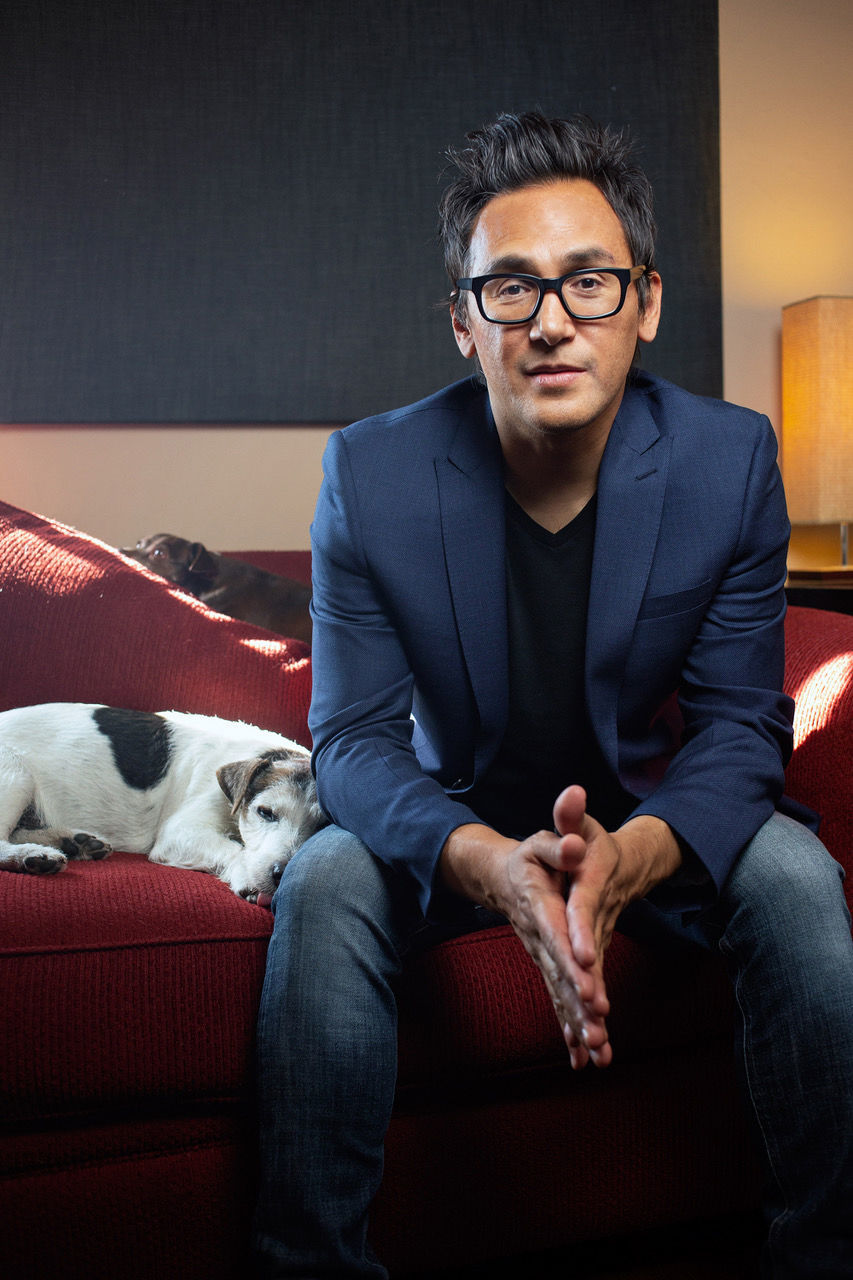 Filmmaker Andrew Troy is directing "I Am A Man," the feature film about Chief Standing Bear to be shot in Nebraska next year.

Filmmaker Andrew Troy wasn’t familiar with the story of Chief Standing Bear when he began reading “I Am a Man,” Lincoln author Joe Starita’s award-winning book about the Ponca leader who, in the late 1800s, became a civil rights icon.

"My father taught Navajo Indians in the '60s, my family members also wrote books about Native Americans — none of us had heard about this story," said Troy, who is Chiricahua Apache.

"When I read the book, I could not believe what an impact this case had on history. I just very much felt compelled to do this project,” he said.

The project is “I Am a Man," a feature film Troy will direct and begin shooting in Nebraska next fall.

Work on the picture, however, began just after the book came out and executive producer Warren Anzalone started negotiating for the film rights.

Anzalone got the book to Troy, a producer, director and film supervisor, who, with his company Troy Entertainment, quietly developed a screenplay and laid the groundwork to make the film.

“We have specifically been working in privacy on this project for almost six years now,” Troy said during a Thursday interview at the Cornhusker Marriott. “It’s really because all of the excitement and anticipation of the unveiling of the Chief Standing Bear statue that people started talking about this film quite a bit.”

At the Nebraska breakfast in Washington, D.C., on Sept. 18, a few hours before the statue’s unveiling in the U.S. Capitol, Troy talked about the film with politicians and guests from the state. “They sort of gasped,” he said. “They were in awe that this was happening."

The movie won’t cover the entire book, which begins in the early 1800s and continues after Standing Bear’s death.

“We wanted to focus on the section starting at the Trail of Tears, going into Indian Territory and then him making his journey back,” Troy said.

The picture, he said, will combine elements of three recent, highly acclaimed films, including “The Revenant” (use of natural lighting, gritty characters and imagery), “12 Years a Slave” (civil rights story) and “Lincoln” (historical aspects).

The development of “I Am a Man” began before “Lincoln” was released, but Steven Spielberg’s 2012 Oscar winner was a game-changer for seeing Standing Bear's story turned into a movie, Troy said.

“He (Spielberg) created a movie that created a marketplace for films like this to be made." "Lincoln" was followed by "12 Years a Slave” and "Revenant," which also won Academy Awards.

"That just set up the perfect opportunity and market for us,” Troy said.

In 2017, after the first draft of the 142-page script was finished, Troy came to Nebraska to present the potential film to the Ponca Tribal Council, which later passed a resolution giving its full support.

“This wasn’t the first time somebody had come to the tribe to say, ‘Hey, we have this idea’ and wanted us to help flesh it out,” said Ponca Tribal Chairman Larry Wright Jr.

“When these guys came and laid the script down on the table that was completely different. Everybody could tell this was something special," Wright said.

Troy also got support from Rep. Jeff Fortenberry and his office, who helped open doors across Nebraska for the production.

After signing a distribution agreement, Troy unexpectedly landed a major producer in Paul Green of Anonymous Content, the company that produced “The Revenant,” “Spotlight,” the HBO series “True Detective” and “Winter’s Bone.”

Troy had approached Anonymous Content simply to get an agent and a director/producer rep, he said. “They were so moved by this project, instead of me getting an agent and a rep, they said, ‘We want to produce this film and I want to be the main producer of this film.’"

When he returns to L.A., Troy said, the next step will be deciding how the film will be released. “It’s definitely going to be theatrical, but we might pair theatrical with streaming as well.”

Then the film will have to be cast. Plans are to use Native actors to play all the Native roles and fill out the ensemble cast of historical figures with A-list actors.

Troy said they're not concerned about finding those top actors.

“This is the type of story that talent seeks. When you’re a top actor in Hollywood, they look for important stories to tell. I’ve already had a lot of direct conversations and calls from just fantastic actors.”

The picture, which has a $19.8 million budget, will be the first feature film shot primarily in Nebraska not directed by Alexander Payne in decades.

Omaha-based Anzalone said one reason is because the state lacks film incentives, which other states offer in the form of tax rebates or kickbacks.

“It’s hard to say no to a rebate when all you have to do is geographically go someplace else. But it was really important for us to stay here because it’s a Nebraska story,” he said.

The production will receive some assistance from the Fremont-based Eastern Nebraska Film Commission, which has received $5 million for the project. The filmmakers plan to use Fremont as a base camp and film around the state as close as possible to where the historic events took place.

Filming is expected to begin in the fall of 2020. While there are some weather requirements, it's not totally dependent on that, Troy said.

"There are many things we can do indoors and at the fort. But we would like to capture the Trail of Tears march as well as Chief Standing Bear and the tribe coming back from Oklahoma to this area.”

After a year of filming, editing and post-production, Troy said, “I Am a Man” should be released in late 2021.

Long before Donel Keeler saw his art staring back at him from the bumpers of automobiles, he saw it hanging in Morrill Hall and earning prizes…

This teaser poster for the film "I Am A Man," depicts Chief Standing Bear at the Niobrara River, looking at the chalk cliffs where he is to bury his son. Taken by acclaimed photographer Jim Krantz, the picture has won prizes in national and international photography contests.

Filmmaker Andrew Troy is directing "I Am A Man," the feature film about Chief Standing Bear to be shot in Nebraska next year.