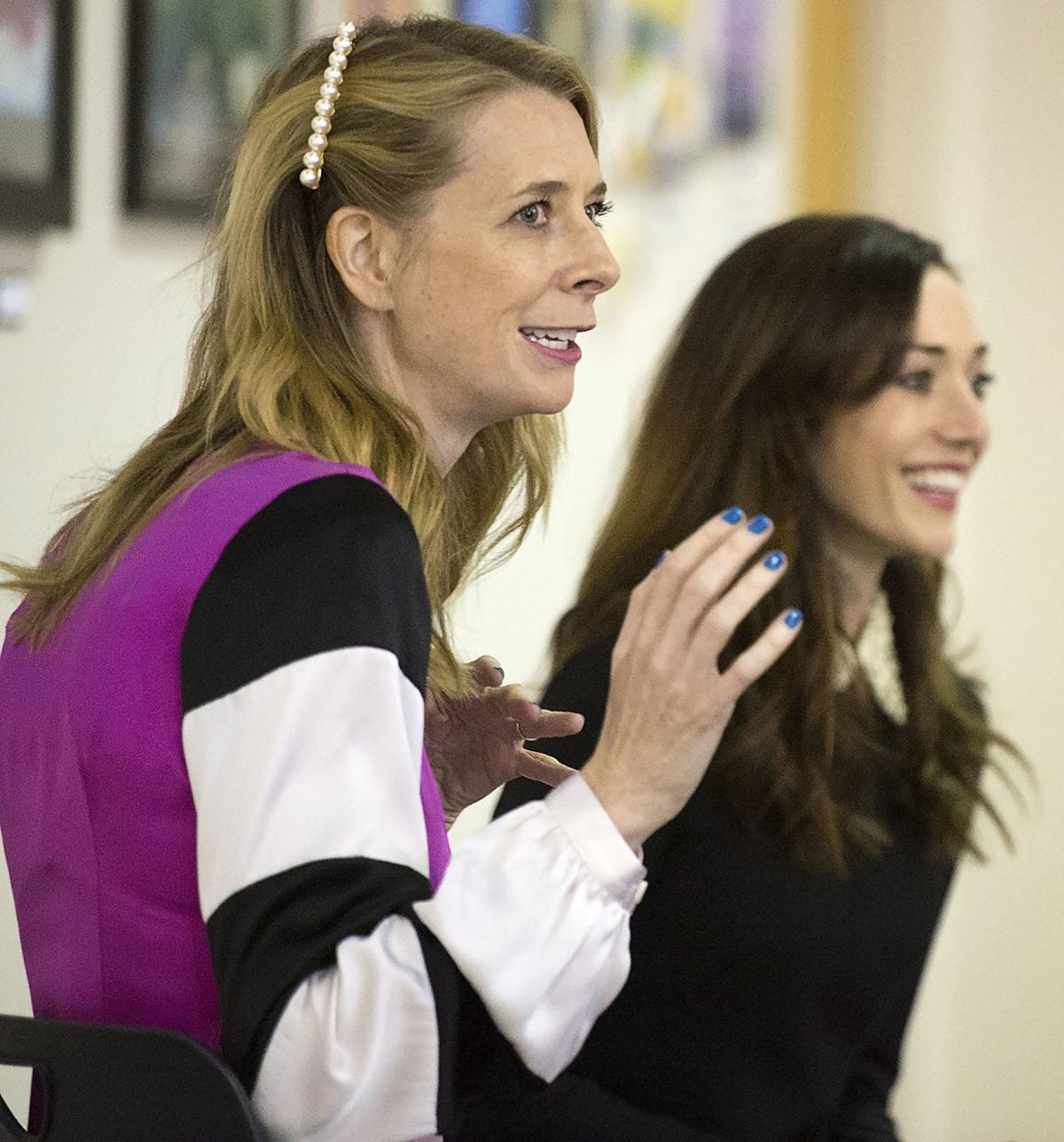 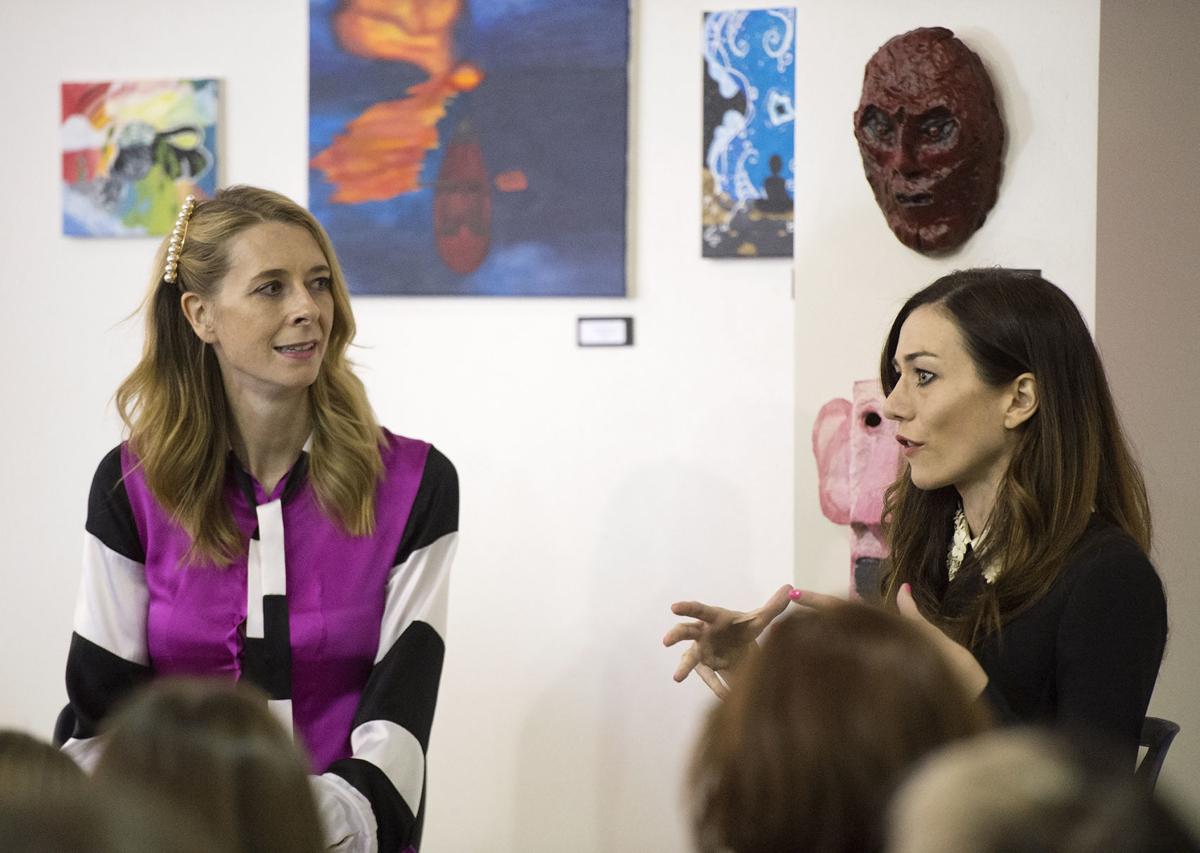 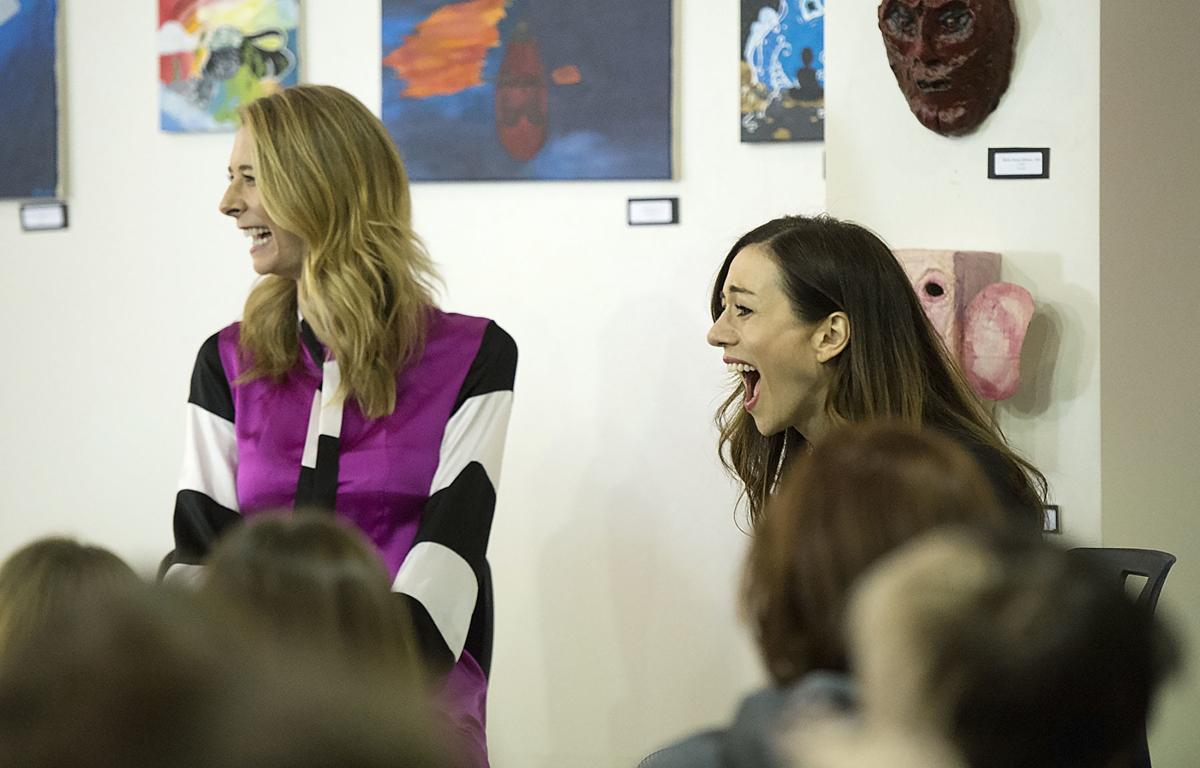 Dawn Luebbe settled into a chair, looked out at the room full of Lincoln Public Schools students, smiled and said “we didn’t wear our braces.”

That line got a laugh, because the students, enrolled in the LPS Arts and Humanities Focus Program, had seen “Greener Grass,” the day-glo suburban satire Luebbe wrote, directed and stars in alongside Jocelyn DeBoer.

Then Luebbe added — “I went to Southeast. It’s very surreal to be back here.”

Whether she said it or not, being back in Lincoln to show her movie was exciting for Luebbe. Just ask DeBoer.

“When we were writing ‘Greener Grass,’ Dawn would tell stories of seeing movies at the Ross theater,” DeBoer said. “I don’t think I’ve seen you (Luebbe) as excited as when we found out it would be playing there.”

“Greener Grass,” which opened at the Ross Media Arts Center last week, will play there through Thursday. Luebbe and DeBoer were at the Ross on Friday night, answering questions after the movie appearing in the same theater that helped Luebbe set her life course.

“I feel like an old grandma talking about a special place,” Luebbe said. “I saw so many movies at the Ross, like ‘Waiting for Guffman.' It really made me want to be a filmmaker and do things that are a little outside the norm.”

That's an understatement when it comes to “Greener Grass,” a film in which all the adults wear braces — constantly searching for perfection, DeBoer said — everyone drives golf carts and a boy turns into a dog to please his father.

DeBoer, whose family is from Minnesota, grew up in Illinois. She aimed at generally satirizing suburbia in the movie and more specifically Midwestern “niceness,” the region's collective desire to keep everything calm, safe and repetitively the same.

“Let me give you an example,” Luebbe said. “One of my best friends from Lincoln, her grandmother passed away a few years ago. They really weren’t doing a big Christmas celebration. I remember another friend saying they should do Christmas in a big way and celebrate the holiday. I’m like, ‘Why, you don’t have to celebrate Christmas. It’s that kind of thing, we wanted to use that.”

DeBoer and Luebbe met in New York, where Luebbe was studying theater at New York University after graduating from Southeast in 1999.

Members of the Amy Poehler-founded The Upright Citizens Brigade Theater, the pair did sketch comedy and improv, teaming to form their production company, Gulp Splash, in 2015.

Their first project: A short film called “Greener Grass” that was such a hit it became a feature. But not before the duo did two more short films, one that — like the short “Greener Grass” — they wrote and acted in but didn’t direct.

That changed, they said, because they discovered that they had the vision for what they wanted to see on screen and after watching the directors of their first two shorts at work, figured they could do the job themselves.

So they watched YouTube videos about directing, got shot lists from other directors and recalled their directorial shadowing experiences.

“We did everything we could to make up for not going to film school,” DeBoer said.

Produced on a very small budget in Georgia, “Greener Grass” was shot in 19 days in 17 locations.

Then it hit a fast track of editing to make the deadlines for the Sundance Film Festival, where it premiered in January, then recutting for South By Southwest, for theatrical distribution.

“Greener Grass” has been an indie movie hit. The short-film version won prizes at South By Southwest and in Europe. And it landed a distribution deal with IFC Midnight, with screenings around the country and making its way to video on-demand streaming.

But it remains a little picture without the massive promotion given to major studio films. So DeBoer and Luebbe have been on the road for months, selling their picture.

“The movie is a word-of-mouth movie,” Luebbe said. “It will survive on whether people tell their friends. There’s so much promotion we had to do, going around to all these places. That’s fun, but we thought by this time we’d be shooting our next movie.”

For an hour Friday morning, students peppered the duo with questions about everything from Little Helen, the movie’s male serial killer, to its commercial for regurgitated baby food — “there’s too much throw up in the movie,” Luebbe said — to the use of color blocking, which DeBoer explained shows the development of the story through changes.

DeBoer and Luebbe, who appeared on NET Nebraska’s “Friday Live” before talking to the students, left the focus program to go to the University of Nebraska-Lincoln’s Johnny Carson Emerging Media Arts Center to speak with students Friday afternoon.

Then it was off to the Ross, where a crowd gathered for the filmmaker back in her hometown.

“This really is fun,” Luebbe said as she walked out of the focus program. “I really do love Lincoln. We might satirize some things, but it’s only because we love where we’re from and the people there.”

Weird is the first word that comes to mind to describe “Greener Grass,” the suburban satire from co-directors/co-stars Dawn Luebbe and Jocelyn…

BEATRICE — In October 1993, a Beatrice High School student was accidentally hanged after a prop malfunction during the school play. The scene …

With Friday’s Ross Media Arts Center opening of “Jojo Rabbit,” Oscar movie season has begun in Lincoln, with 10 more contenders for the Academ…