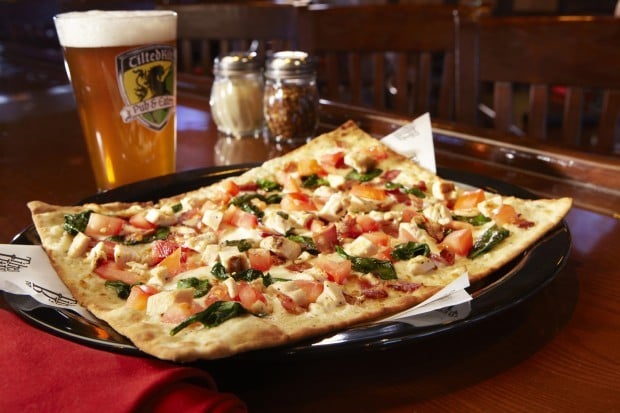 The McKayla's Garden flatbread pizza is one of Tilted Kilt's vegetarian options. 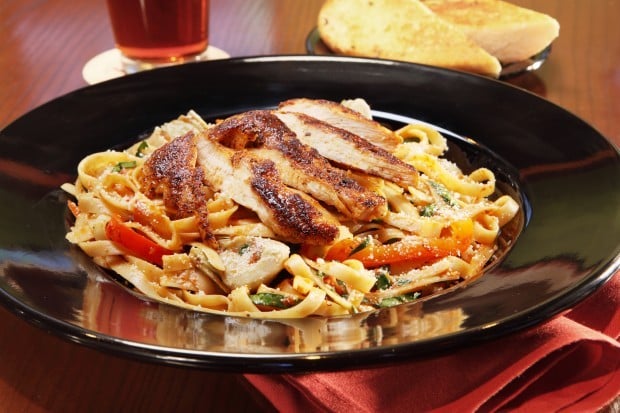 The Blackened Chicken Fettuccini is one of the Tilted Kilt dishes that might "sting" your taste buds a little.

I’m not returning after my visit last Friday night to the Tilted Kilt Pub & Eatery, the new restaurant at Gateway Mall.

And, no, it had nothing to do with the scantily clad servers, whose attire, or lack thereof, may offend some diners.

This was by far my worst dining experience since I began writing restaurant reviews and stories in 1998 for the Lincoln Journal Star.

It was so bad, it became funny, especially when our server -- a polite young woman who told us it was her first week -- returned time after time to ask how we were doing.

“OK,” my wife and I answered the first time about 15 minutes after placing our orders. It was busy. We were chatting and watching the Miami Heat play on one of the umpteen high-definition TVs plastered on the pub's wall.

“Hungry,” we said the second time, after she asked about 30 minutes later. She promised our food would be “right out" and explained the kitchen was having some issues.

Meanwhile, we watched a family of four -- yep, a mom and a dad brought their two elementary-aged kids to the bar -- who were seated after us get their appetizer and then their meals. They were gone before our food arrived.

“Really hungry,” we finally told our server when she asked once more how we were doing, now 80 minutes after placing the order. She had stopped by two previous times to say our order should be next up.

By then, my wife wasn’t laughing anymore. She was, well, I can’t use that word here, but it's paired with "off." I wasn’t amused, either, especially when the four women at the table next to us, who arrived 30 minutes after we did, received their food.

Normally, I would have left, but I was working. Plus, I was curious to see how this was going to play out -- to see when our food was going to arrive and how it would taste when it did.

We asked for some sort of compensation. Our server said she needed to discuss it with the manager, who comped our meals, but not our drinks, after reviewing the situation. He told us the kitchen was a “disaster,” yet people all around us were receiving their meals in a timely manner. Call me perplexed.

But here’s the thing: We shouldn’t have had to ask for compensation. I attribute that to an inexperienced server, who didn’t know she should be fighting for her customers (and her tip).

When the food finally arrived -- 90 minutes after ordering -- it was met with disappointment by me. I ordered the Danny Boy’s Shepherd’s Pie ($9.99), which the manager called his favorite dish on the menu. The dish featured ground beef, carrots, peas and mushroom gravy topped with garlic mashed potatoes and Parmesan cheese.

It tasted like the top fell off the salt shaker. So salty, it was nearly inedible. (But, remember, I was famished). Oh yeah, the garlic bread was cold, too.

My wife ordered the blackened chicken fettuccine ($10.99), which featured grilled strips of blackened chicken with peppers, onions, spinach and artichoke hearts tossed with the noodles in a sun-dried tomato pesto sauce. She liked her meal, but was dizzy with hunger. I found the pesto sauce too soupy for my taste.

My wife wanted to give the Tilted Kilt a second chance. I said “no.” I waited more than month -- it opened in mid-December -- before visiting the restaurant, plenty of time to work out any kinks. Plus, this is a franchise. Chains are known for being able to hit the ground running.

The pub avoids a failing grade because my wife actually enjoyed her dish. Grade: D+

Not surprisingly, men outnumber women three to one as customers. The draw, of course, is the women, who wear short plaid skirts and tight tops that accentuate their breasts. The servers are trained to chat up their patrons and push drinks. My wife had a mixed drink that cost $6.50.

The decor features a Scottish theme, with the walls filled with Highlands-type pictures and paraphernalia to go along with a bunch of Husker stuff. Taylor Martinez’s No. 3 jersey is displayed prominently.

The bar is jammed with the aforementioned TVs, including a couple of movie screens, and pipes in loud classic rock, making it difficult to hear and/or converse. It’s a sensory overload. Grade: C

There’s just a handful of items. Noteworthy ones include the McKayla’s Garden flatbread pizza ($8.99) and a black bean veggie wrap ($9.99). Grade: C-

The barn-shaped building in College View no longer is a Dairy Queen, but that hasn’t stopped patrons from asking for ice cream treats.

Photos: Dining out options in Lincoln

Every week, Journal Star reporter Jeff Korbelik dines at a different Lincoln restaurant. Click through some of the beautiful food photos from …

Lange-Kubick: Serving up shame-free sexuality in all forms and sizes

Jessica Lane, the 24-year-old co-founder of Resplendent Jezebel Burlesque, has no problem with women making money at strip clubs, in the sex industry or at so-called "breastaurants." It’s the criteria that bother her.

The McKayla's Garden flatbread pizza is one of Tilted Kilt's vegetarian options.

The Blackened Chicken Fettuccini is one of the Tilted Kilt dishes that might "sting" your taste buds a little.