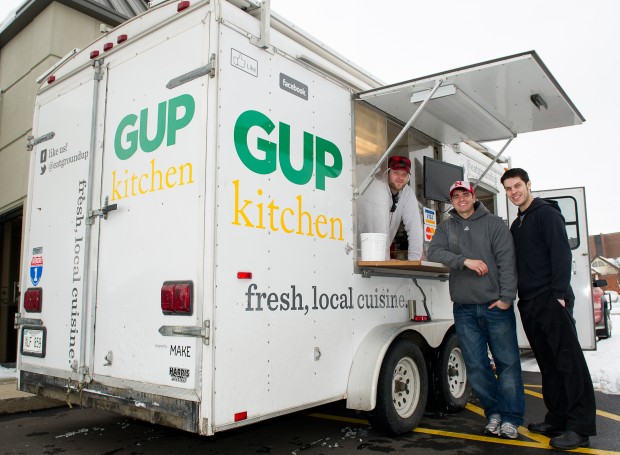 Erik Hustad leans out of the GUP Kitchen next to Gabriel Lovelace (center) and Tim Aksamit. Hustad and Lovelace are co-owners of the GUP Kitchen, a mobile kitchen serving high quality cuisine around Lincoln. (KRISTIN STREFF / Lincoln Journal Star) 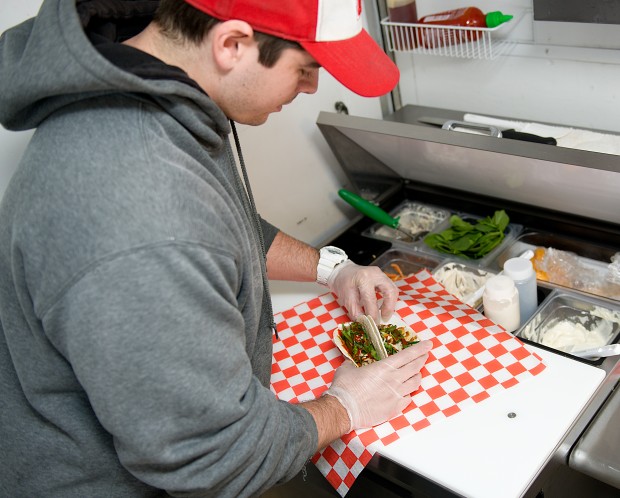 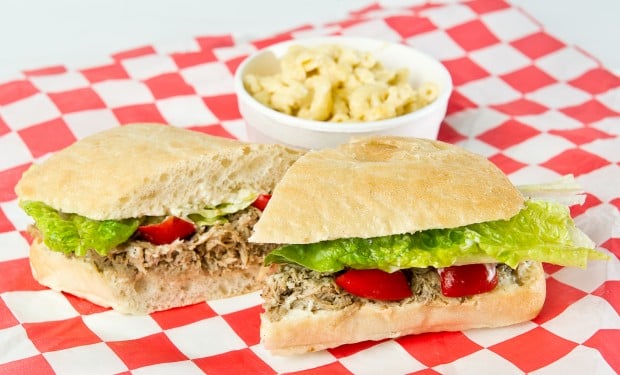 The Cuban Spiced Pork Sandwich served with a side of Mac N Cheese is a top seller at the GUP Kitchen. (KRISTIN STREFF / Lincoln Journal Star)

Erik Hustad was forthright when he said the GUP Kitchen, Lincoln's second food truck, is a means to an end.

"We're looking for something, hopefully soon, where we can do more volume and do more catering from a sit-down-style, casual restaurant," said Hustad, who co-owns the food truck with Gabriel Lovelace.

Does that mean they'll get rid of the truck once they open a restaurant?

That's good news. As Lincoln diners can attest, The GUP and Lincoln's other food truck, Heoya, quickly are finding their place in the city's dining scene.

They will become popular and accessible once the city amends an ordinance allowing them to set up shop in public places. The City Council is expected to take a serious look at the law this spring.

The GUP -- short for "ground up" -- has been open since early November. It offers three sandwiches -- sometimes four with an occasional special -- and tacos made from local ingredients. It sources its meats from TD Niche Pork (Elk Creek) and La Quercia (Norwalk, Iowa) and its ciabatta rolls from Le Quartier (Lincoln).

The truck parks at 83rd and O streets on Tuesdays and Thursdays, at Eighth and M streets on Wednesdays, Fridays and Saturdays and at Nebraska 2 and Apple's Way on Sundays. You can check its website -- eatgroundup.com -- or Facebook page for updates.

Originally from Lincoln, Hustad studied culinary arts at The Art Institute of Seattle. He returned to Lincoln to start a food service with Lovelace, who is his cousin. Their moms are sisters.

"We're getting our feet wet in the business," Hustad said. "It's giving us an income and allowing us to save money in order to create more of a restaurant concept."

The GUP makes a tasty sandwich. I just wish there were more options. On my visit, a co-worker and I ordered the Cuban spiced pork and roast beef sandwiches. The other sandwich is chicken cranberry salad. The menu also features pork tacos on corn or flour tortillas.

Sandwiches cost $6.95 each and are served with a choice of kettle chips, homemade potato salad or macaroni and cheese. Gluten-free options are available upon request. Tacos are $2.25 each or $6.50 for two and a side.

The meats in both our sandwiches were lean. The pork was seasoned well. The highlight on the pork sandwich were the secret "awesome sauce" and the pickled Peppadew peppers, both of which gave it some pizzazz.

The roast beef sandwich included sharp cheddar cheese, a creamy, root veggie slaw (plenty of carrots) and a Worcestershire-black pepper mayonnaise. The slaw, good enough to be eaten alone, is what did it for me.

Hustad and Lovelace said they may add more sandwiches, including a veggie option as they get more comfortable. The food is "A" level, but the menu is a "B."

Sandwiches are made to order, which may lead you to believe they take a bit of time. But Hustad and Lovelace have a system  and are Jimmy John's fast in getting sandwiches in their customers' hands right away. It helps keeping the menu small.

You may, however, have to wait to place an order. The truck becomes a popular destination for diners on nice days, especially around the noon hour. Lines can be six to 10 people deep. Grade: B-plus.

The duo admits a weakness here. They had a veggie sandwich on the menu when they first opened, but not a single person ordered one, so they dumped it.

They can, however, create one from scratch, using the ingredients -- root slaw, pickled Peppadew peppers, cheeses, etc. -- from the other sandwiches. They plan to add a veggie sandwich when local produce becomes available from farmers markets. Grade: D.

Erik Hustad leans out of the GUP Kitchen next to Gabriel Lovelace (center) and Tim Aksamit. Hustad and Lovelace are co-owners of the GUP Kitchen, a mobile kitchen serving high quality cuisine around Lincoln. (KRISTIN STREFF / Lincoln Journal Star)

The Cuban Spiced Pork Sandwich served with a side of Mac N Cheese is a top seller at the GUP Kitchen. (KRISTIN STREFF / Lincoln Journal Star)