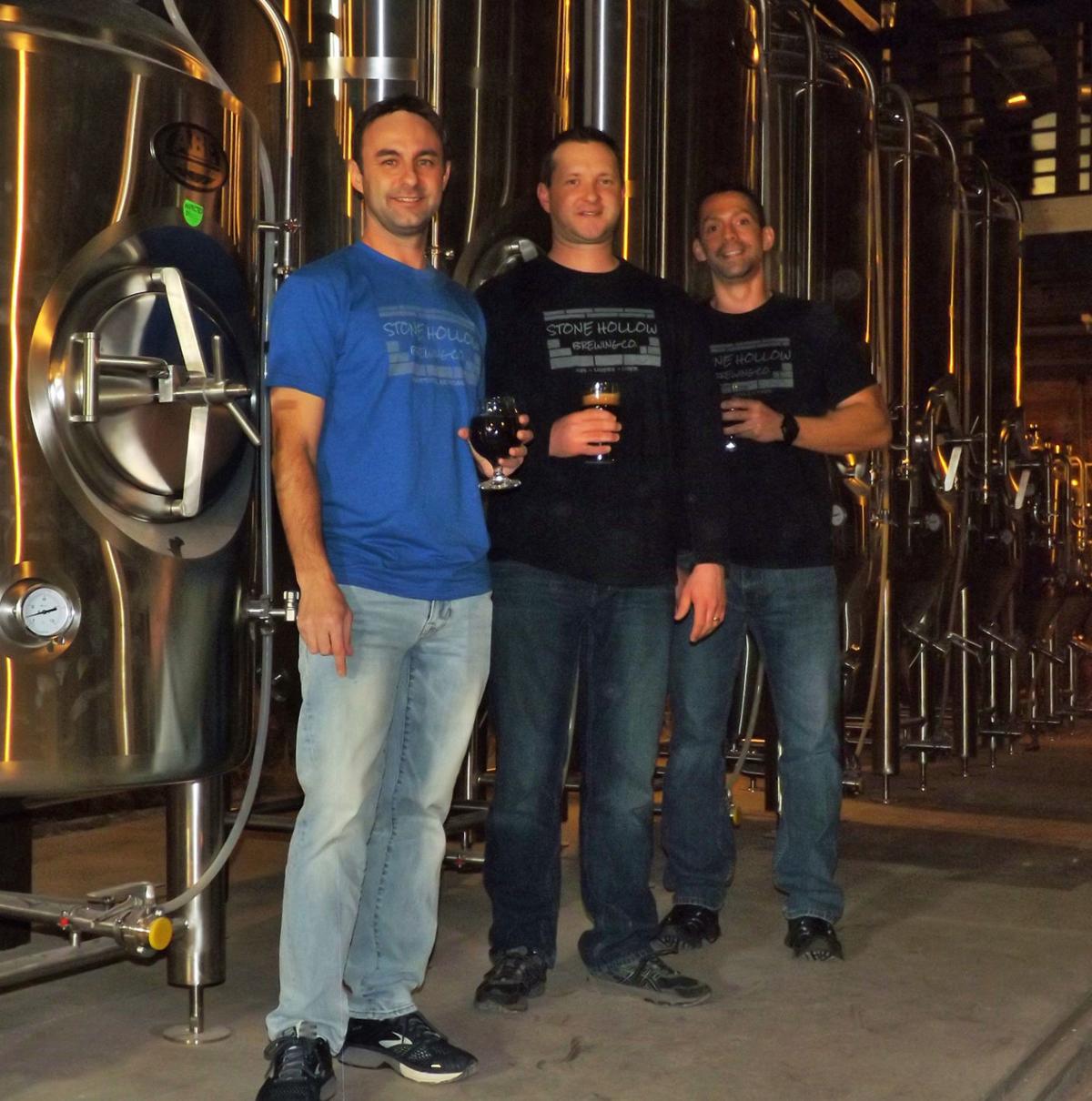 Bryon Belding (left) is the full-time brewer and operations manager at Stone Hollow. Part-time brewers Jim Anciaux (center) and Clint Bruhn help make all of the beer and cider. They have a combined 30-plus years of home-brewing experience. 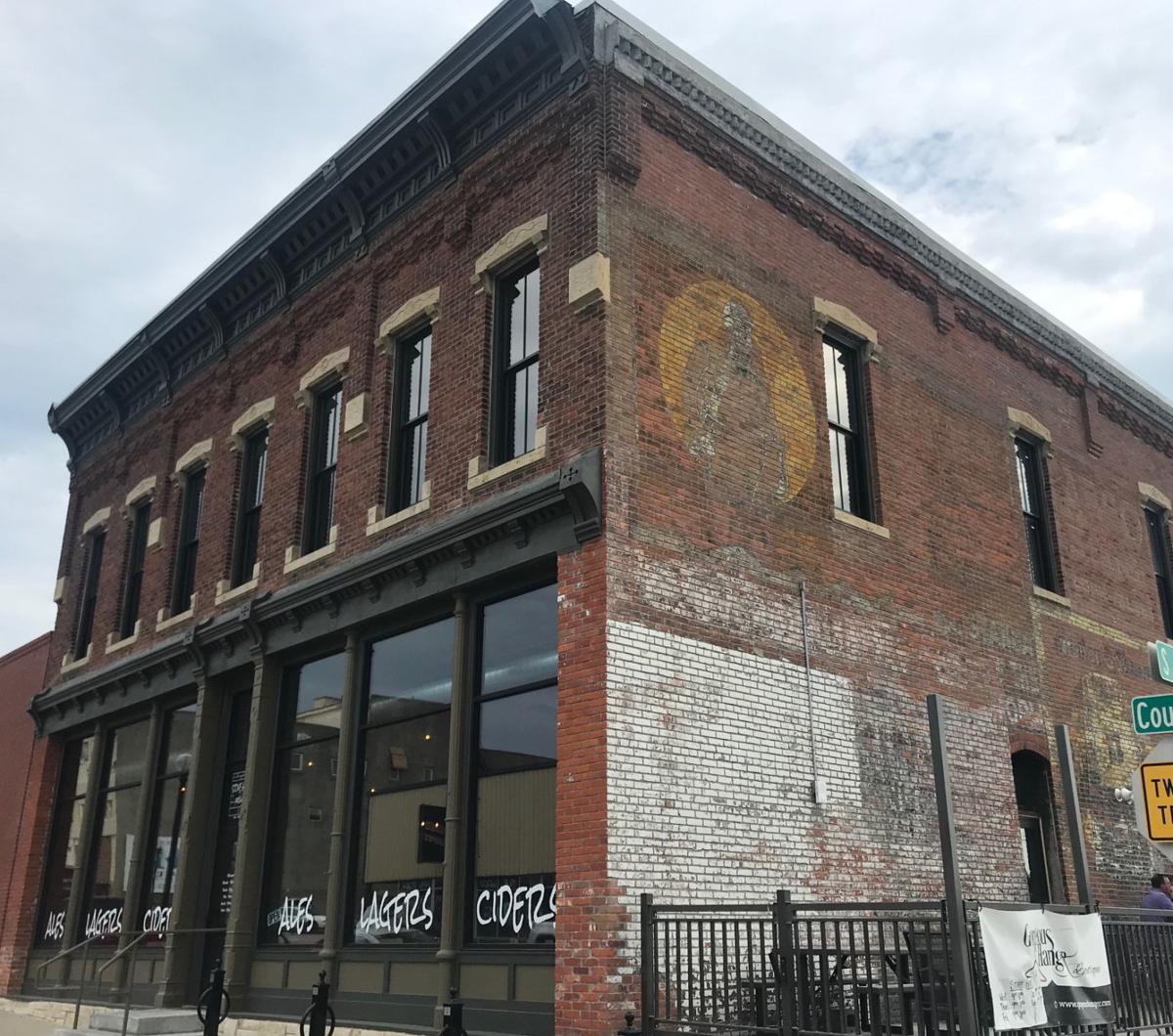 Stone Hollow is located in the 140-year-old Mercantile Building at Third and Court streets in Beatrice.

Bryon Belding started brewing beers at home in Lincoln about 13 years ago. Now he is back home In Beatrice, doing the same on a grander scale.

Stone Hollow Brewing Co. is a business with several partners and three brewers, but Belding is the full-time brew master and operations manager.

“Stone Hollow is one of the newest breweries to hit the Nebraska scene,” Belding said, “yet we occupy a revitalized space that is among the oldest and most unique in the state.”

Stone Hollow, which opened in March, is located in the old Mercantile Building at Third and Court streets. It is more than 140 years old.

“The owners of the building (Todd and Soni Hydo) were thinking about what to put into it. They decided a brewery might be a good fit,” Belding said. “They asked around and tracked me down and asked if I’d like to be the head brewer.”

Belding had 13 years of home brewing experience under his belt. He also added veteran home brewers Jim Anciaux and Clint Bruhn to the Stone Hollow team, and now things seem to be hopping. (Wink, wink.)

“As one of the few breweries in Nebraska to have a brewery and a winery license, we are able to make a wide array of beer and hard cider,” Belding said.

The Stone Hollow building is full of character and history. It’s just a really cool space in downtown Beatrice, and much of the story can be found on Stone Hollow’s Facebook page.

“A lot of people have gone out of their way to tell us how impressed they are with the historical preservation and layout of the building,” said Belding. “It is and will be home to many other shops, including a cigar shop, boutique, interactive art studio and speakeasy bar.

“If all goes as planned, the building will be zoned as Nebraska’s first indoor entertainment district, allowing patrons to walk around the entire building and visit neighboring shops with their drink.”

Belding, who was a fraud investigator for a large insurance company before Stone Hollow, is married (Vicki), and they have two children (Evan and Greyson). They live in Lincoln, but Belding was born and raised in Beatrice.

“Leading up to this, I was a pretty avid home brewer,” he said. “I did competitions locally and nationally just to get my name out there.”

Stone Hollow’s most popular beer right now is the Really Vanilli Wheat. Other favorites include the Off Kilter Scottish Ale, the Mummy Trail IPA and the MacinTOSH.0 Apple Cider.

“We have hopes to start doing some limited distribution in the near future,” Belding said. “We do not have a canning or bottling line, but it is our plan to get some kegs to neighboring bars/restaurants in the upcoming months.”

BEATRICE — A woman has been accused of stealing more than $100,000 while working for a Beatrice insurance agency.

BEATRICE — In October 1993, a Beatrice High School student was accidentally hanged after a prop malfunction during the school play. The scene …

BEATRICE — Garold Kleveland can still see the faces of many of his former employees.

A restaurant recently opened in the former Legends space in downtown Clatonia.

Bryon Belding (left) is the full-time brewer and operations manager at Stone Hollow. Part-time brewers Jim Anciaux (center) and Clint Bruhn help make all of the beer and cider. They have a combined 30-plus years of home-brewing experience.

Stone Hollow is located in the 140-year-old Mercantile Building at Third and Court streets in Beatrice.