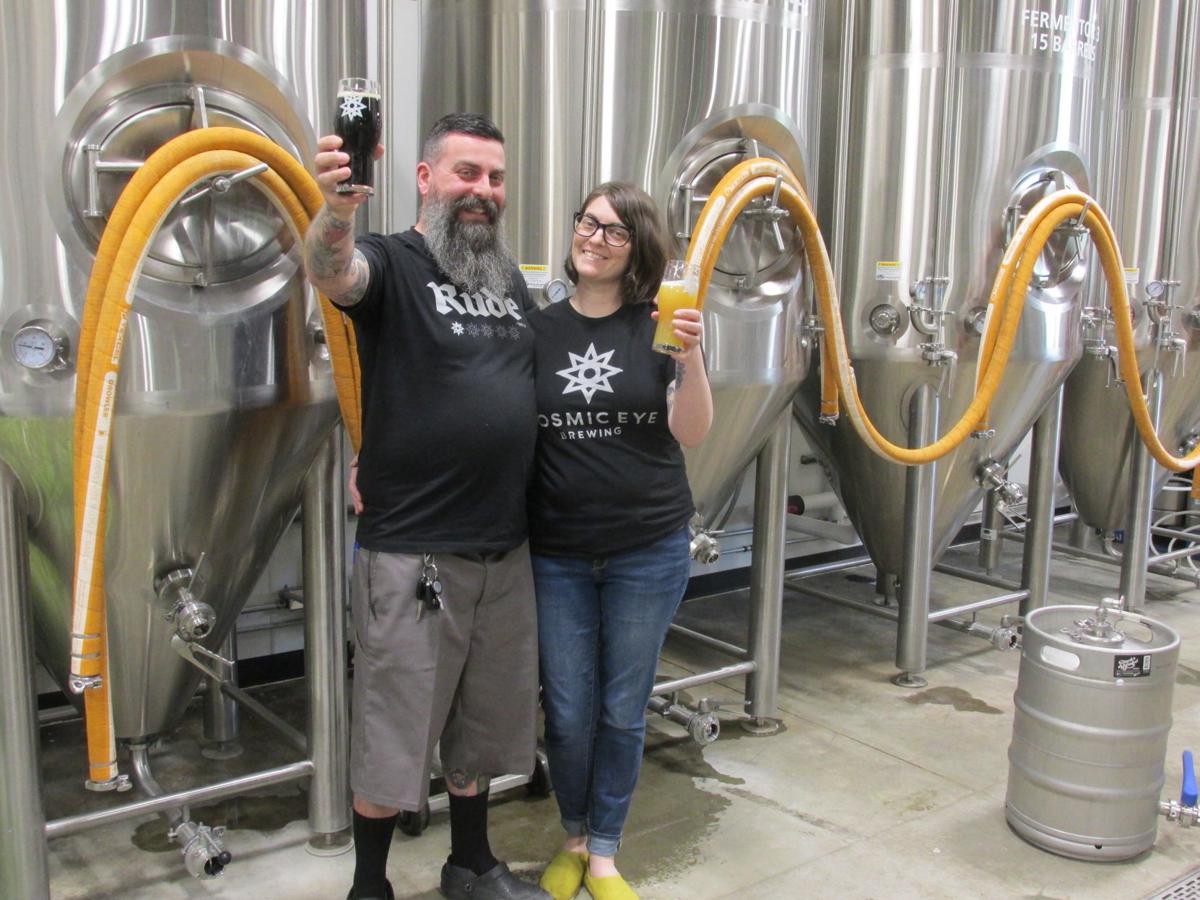 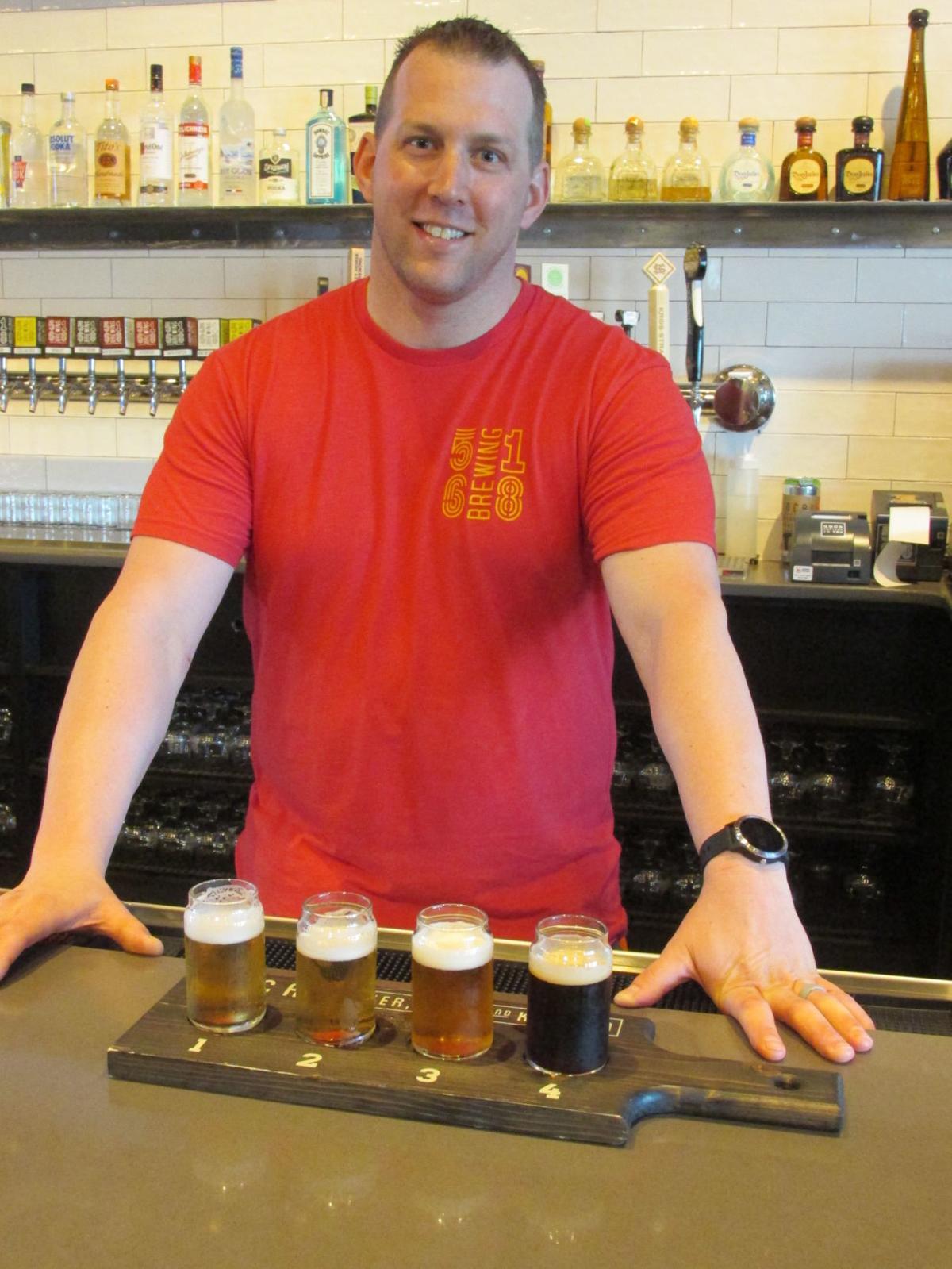 Brian Hoesing was dealing with a high-centered hand jack loaded with two pallets of full beer kegs destined for loading onto a truck for distribution. As head brewer and brewery manager for 5168 Brewery at 5730 Hidcote Drive, it was not an unusual task for Hoesing, but one that demonstrates the various expectations of a craft brewer.

Across town, Sam and Michelle Riggins – co-owners of Cosmic Eye Brewing, 6800 P St., #300 – are engaged in the unique experience of brewing beer and making their taproom an appealing, family-friendly destination, complete with a special Kids’ Room.

The two breweries represent some of the different qualities that make Lincoln’s craft brewing establishments so unique.

5168 Brewery – which opened in January 2018 – is clustered and affiliated with Hiro 88 restaurant and Local Beer, Patio and Kitchen in southeast Lincoln.

Its taproom is slick, shiny and frequented by a wide variety of patrons, although many are in the younger to middle-age range.

Hoesing – who by day is a physician's assistant in Omaha – started home brewing 13 years ago. Competitions and awards followed as well as commercial brewing. (There is a 5168 taproom in Omaha’s Midtown Crossing area.)

One of the keys to Hoesing’s brewing creations is his pushing further than traditional beer styles. That is evidenced in such 5168 mainstays as the hops-loaded New Beginnings IPA, the Hawaiian Porter (blend of coffee, vanilla beans, cacao nibs and roasted coconut) and 88 Lager (Asian-style lager using Hiro 88 gluten-reduced rice).

Hoesing says the 88 Lager is a perfect introduction to get people into 5168 beers. And the Hawaiian Porter? With a wide smile, he says, “It’s like drinking a Mounds candy bar.”

Seasonal and one-off brewings are squeezed in when they can, according to Hoesing. “Really, there is no rhyme or reason,” he says. A couple of recent offerings have included brews titled Devil’s Halo and Kangaroo Dropkick.

“We might be looking into something seasonal for Oktoberfest,” he adds.

5168 beers can be found in numerous Lincoln bars and restaurants, including HopCat, Old Chicago, Happy Raven, Hiro 88 and Local Beer, Patio and Kitchen. Growlers are available off-sale at 5168.

A special feature of 5168’s taproom is the number of non-5168 beers available. Hoesing says the taproom includes beers from as many breweries from across the state as possible. Patrons don’t have to leave the Capital City to sample beers from Broken Bow, Kearney, McCook, Ord and other locales around Nebraska.

In east-central Lincoln at Cosmic Eye Brewing, family is foremost – meaning that location, attitude and environment are as important as the beer.

“We are more aligned with a German beer hall (atmosphere) than a bar,” says Sam Riggins, brewmaster and co-owner.

His co-owner wife, Michelle, is the taproom manager. She emphasizes that Cosmic Eye is somewhat unique to the beer market. “We’re family-friendly, neighborhood-welcoming,” she says.

Opening in October 2018 in the previous Laser Quest entertainment site, the Riggins liked the location, explaining that they live in the area and wanted to provide something for families in the general neighborhood.

The brewery and its taproom are personal to the Riggins. Customers model appropriate drinking behavior, according to Michelle. “We have had three generations of families in, and no one drinks too much,” she says.

Sam reinforces how Cosmic Eye is dissimilar. “There is a difference in coming to a taproom and going to a bar. Cosmic Eye is not a bar.”

The Cosmic Eye’s Kid Room is separate from the taproom and has kids games, books and coloring activities for children. Each Sunday from 1 to 4 p.m., a different craft activity is scheduled for kids.

Sam relates that he has been involved in home brewing since the early 1990s. "It’s a neat thing … just about everyone (in craft beer brewing) starts out working in their basement or garage.”

Sam worked as a brewer at Nebraska Brewing Co. in Omaha for a number of years, leaving in 2014, and has been working toward his own brewery since.

“Craft brewing is a weird business," he says. "Everything is competitive, but there is probably more cooperation and support (between competitors) than you can get in any other business.”

Cosmic Eye – which got its name from a Mastodon song lyric – only features its own beers, with 17 currently on tap. The business also offers off-sale. A rotating cider is also offered, along with a small selection of spirits and wine.

For Sam, there is an important role to be respected in the traditions of brewing. He engages in some limited experimentation with beer recipes, but “first and foremost, the product must be recognizable as beer,” he emphasizes.

The remaining nine taps feature a revolving selection of Sam’s recipes; some repeat, others are new. All orders should be placed at the bar.

Doing their own canning on-site, Cosmic Eye beers can be found in some 40 locations around Lincoln, including Moran’s Liquor, N Street Liquor, The Still, Meier’s Cork & Bottle and HyVees, as well as close to 40 Omaha bars and off-sales.

Limited snacks are available at Cosmic Eye including hummus and crackers, pork rinds and salami, and cheese and crackers ($2.50-$3.50). Popcorn is free. Various food trucks are usually on site on Fridays and Saturdays, and occasionally on Sundays. Customers can also have food delivered or bring it in themselves.

The Riggins stress that Cosmic Eye is a reflection of themselves and their attitude of inclusiveness. “We stay true to ourselves, we don’t chase the newest thing. This is us … 100 percent all the time,” Michelle says.

Back at 5168, Hoesing points out some of the brewery’s highlights – the relaxing ambiance of the taproom patio area, the chance to observe the brewery’s staff working around the fermentation vats, and the opportunity for a mini-tour of Nebraska breweries via the wide variety of statewide beers, including the 5168 brewings, without leaving Lincoln.

Gummi bears or hibiscus? Lincoln breweries have their own 'weird' beers

At the recent Strange Brew Festival in Reno, Nevada, you could find beers brewed with steak, onion, macaroni, pickle and garlic bread flavors.

The beer industry is worth $2.2 billion a year in Nebraska, according to a new study.

New Yia Yia's in Lincoln: 'The kind of place where you'll want to stay and hang'

One of the best pizzas in Lincoln has become more readily available.

At her lowest point, Lincoln woman embraced the idea of high tea socials

In this chaotic hustle-and-bustle, hurry-up-and-wait, fast-food world, sometimes a good cup of tea can slow things down and provide a necessar…

Cosmic Eye Brewing, which opened in October 2018 at 6800 P St., has been named a Grand Champion in the American Black Ale category in the winter edition of the United States Beer Tasting Championship.