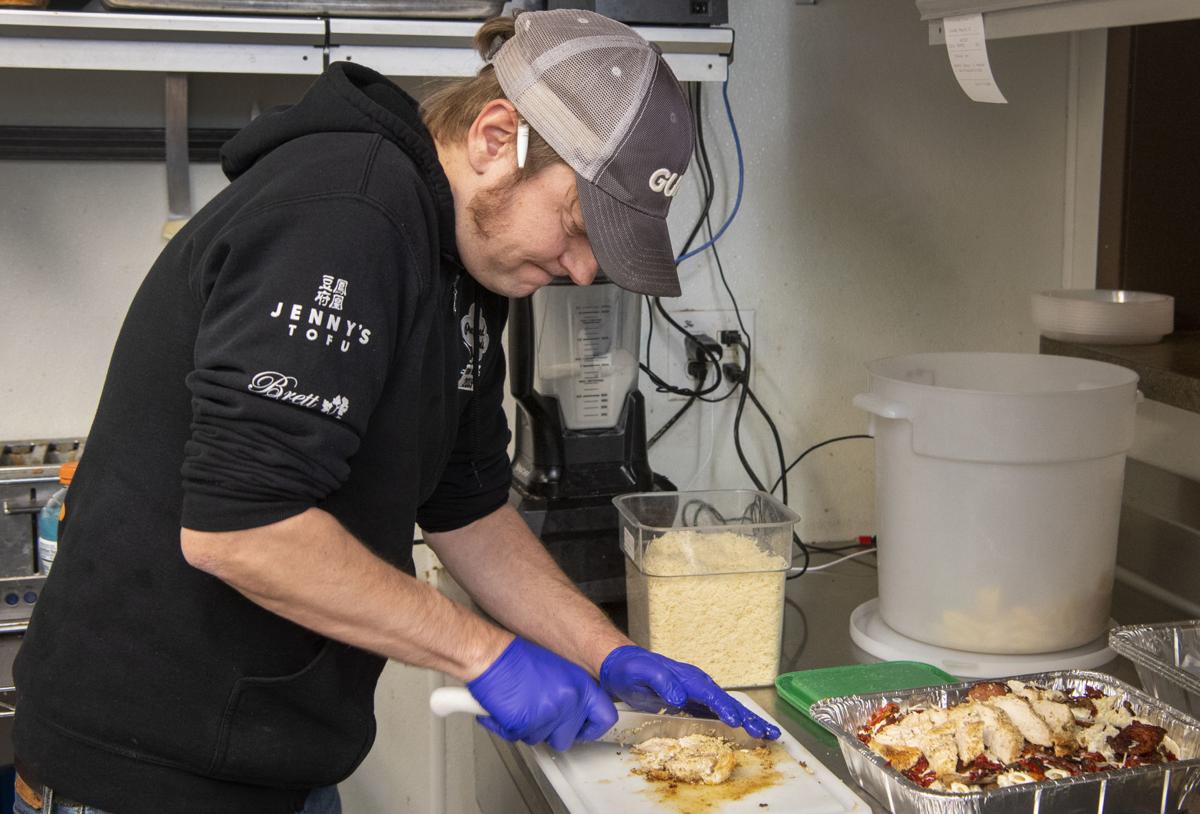 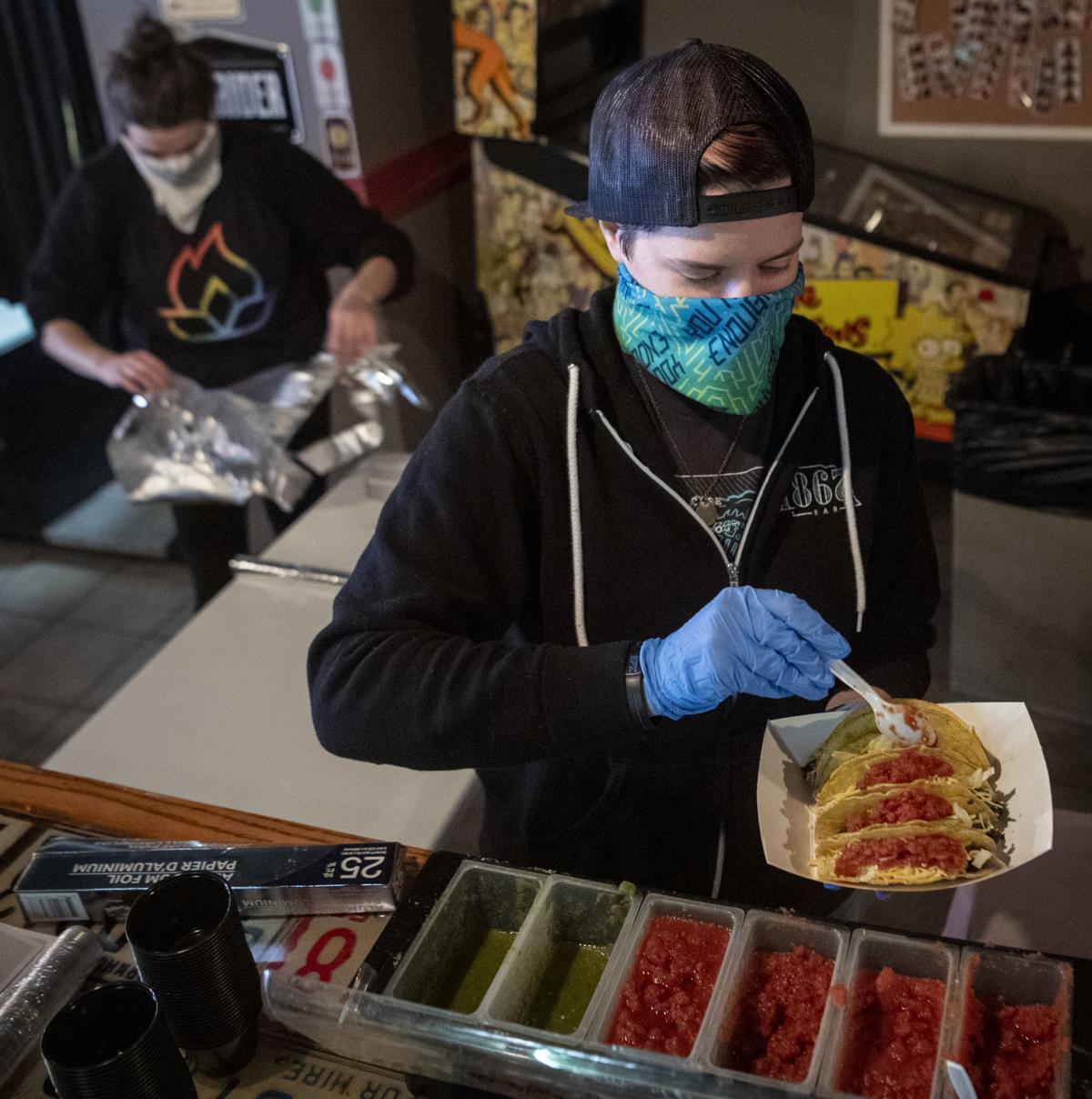 Erika Meissner (right) makes tacos for a take-out customer on Tuesday, April 14, at the 1867 Bar. 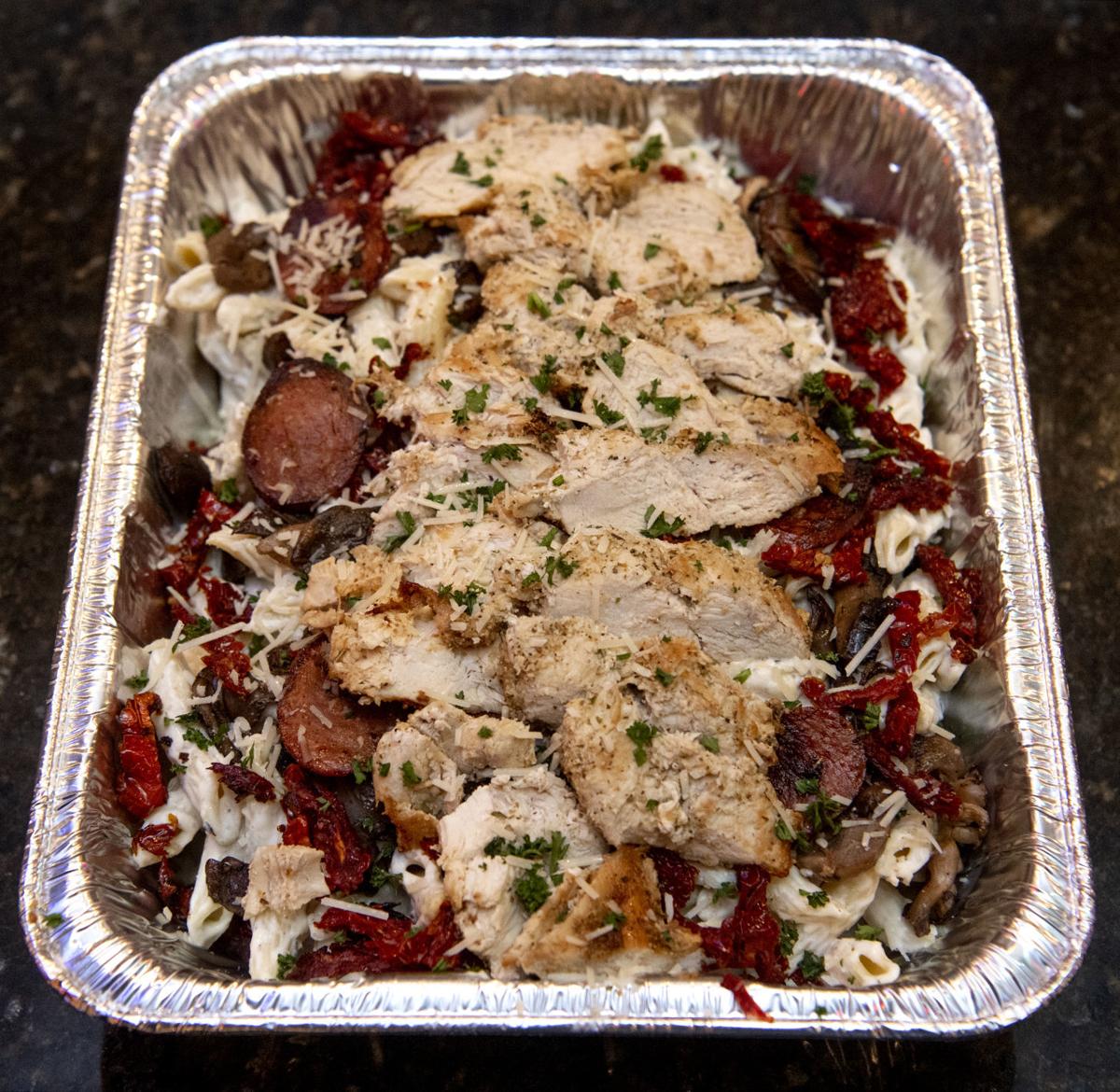 On March 19, Nick Tarlowski knew that Grata Bar & Lounge was going to have to pivot and pivot fast.

Gov. Pete Ricketts issued a directed health measure that day for Omaha, closing bars and limiting restaurants to delivery and take-out sales. Tarlowski, head chef at the restaurant at 70th and A streets, figured a similar measure in Lincoln was just a matter of time.

Full-scale change was needed. It was then that Tarlowski made the "switch, full on," to the menu, which featured family-style meals — entrees that served four to six people for $25 a pop and could be put together for curbside pickup and delivery — to keep Grata afloat.

The family meals have been popular. On Tuesday, for example, Grata sold more than 30.

On Easter Sunday, it moved more than 110 ham, turkey or pork loin family meals — a huge undertaking that packed its storage and strained the staff.

“Believe it or not, we’re pretty busy,” he said as he worked on a pizza and wings special. “That’s all anyone in our industry wants to be, busy serving people.”

Tarlowski, the culinary team leader at Whole Foods Market before moving to Grata earlier this year, had, unknowingly, been planning the pivot for about a month.

“We’ve been planning a catering kitchen since February, coming up with ideas for what we want to do,” he said. “We thought people are going to want to take something home with them at the end of the night after the kitchen’s closed, whether it’s take-and-bake pizzas, half-pan family meals.

“So when we were told it’s going to be 10 people or less, we had a half-plan to get started."

Those dishes, however, had to be changed for the family audience. The chicken in the in-house blackened chicken Alfredo, for instance, is made with Cajun spices, which, Tarlowski said, are likely too hot for some, including children. So he substituted less spicy for something that the whole family could enjoy.

Preparation of the family meals, too, had to be changed in order to safely make the food for refrigeration and then reheating at home.

It takes some finesse. Pasta has to be chilled separately, as do chicken and Alfredo sauce, Tarlowski said.

“You can’t put them all together and get them to chill down to 40 degrees at the same time," he said. "Then I put it together and it’s into the coolers. They can only stay there for a limited time. So you try to limit the number to what you think you’re going to be able to sell.”

The meals are assembled with looks in mind — both for photographs that Grata puts on its Facebook page to promote the offerings and for customers who might be stopping in for a pizza and might see a meal in a case.

“In food retail, that’s everything,” Tarlowski said, drawing on his Whole Foods experience. “If it doesn’t look good, people will not buy it. That’s why everything we put together has to pop. We know it’s going to taste good. But you have to get people to buy it, to try it.”

In order to safely deliver the Easter meals, Grata needed hot holding cambros. It got them from Chef Au Chef catering's Aaron Young.

It was an indicator of the kind of collaboration that is taking place during these desperate times in the restaurant community.

“Here we are going directly into his business and he said, ‘Sure, no problem, you can use them,’ and he even drove them over, we didn’t even have to pick them up,” Tarlowski said. “Nobody outside the business knows about it, but behind the scenes, people are supporting each other, helping each other out.

"We’re all in this together.”

Arena in limbo with no shows and no date they'll resume

Young, who’s both a colleague and Grata customer, agreed with Tarlowski’s take on the cooperation between businesses.

“We’re not working on Saturday night now that we don’t have weddings to cater,” Young said. “Grata wanted to pay me for it. I was ‘No, you do what you need to do.’ I’ve been in that situation before. I’m trying to pay it forward. I don’t want to see anyone hurting."

Chef Au Chef has been in the family-style dining genre for more than a year. Its ‘Wham Bam Meal in a Pan' has been popular with customers.

"I’ve been encouraging other restaurants to do it," he said. "Take your top five sellers, adapt them into a family portion, so you can get some revenue coming in. People are anxious to get them and to support local restaurants.”

The working-together spirit extends from Grata to 1867 Bar, via tacos.

Tarlowski, longtime friends with 1867 Bar owner Kelsey Sanders and her husband and his JV Allstars band mate Matty, wanted to do something to help her after the bar lost much of its income.

A quick phone call to Knickerbockers co-owner Shawn Tyrell got him the recipe for the sauces, the true secret ingredient for the tacos. This week, 1867 celebrated Taco Tuesday, Knickerbockers style.

Even though they can't be eaten on the premises, the Knickerbockers tacos have been a hit, Sanders said.

“We’re selling out every week," she said. “It’s got a lot of people into the bar who’ve never come in before — a lot of older people who went to Knickerbockers. A lot of them are buying off-sale, too. That really helps. It’s a big day for us. It’s definitely something we need.”

The move to family meals, along with providing its regular menu, has allowed Grata to continue to keep about half of its staff on the payroll.

“We’re not at full staff, for sure,” Tarlowski said. "… But we’ve been able to keep a lot of people, some of the front of house people are working in the kitchen.

“And our customers have been very, very generous with their gratuities. That gets spread around to the staff — and it really helps.”

That, Tarlowski said, has reopened the biggest profit center of any restaurant and bar — selling drinks.

“I’m happy we can sell those,” he said. “I hope people are responsible with them and don’t crack them open when they drive off. But that’s out of my control.”

This week, Tarlowski is working on some new meals, some healthy options including sriracha salad.

Arena in limbo with no shows and no date they'll resume

“You can’t eat a hamburger or pasta every day,” he said.

The scene in Lincoln

Erika Meissner (right) makes tacos for a take-out customer on Tuesday, April 14, at the 1867 Bar.