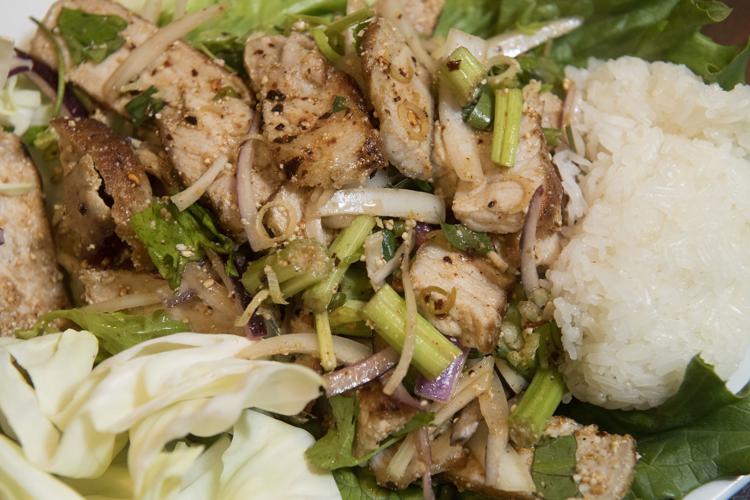 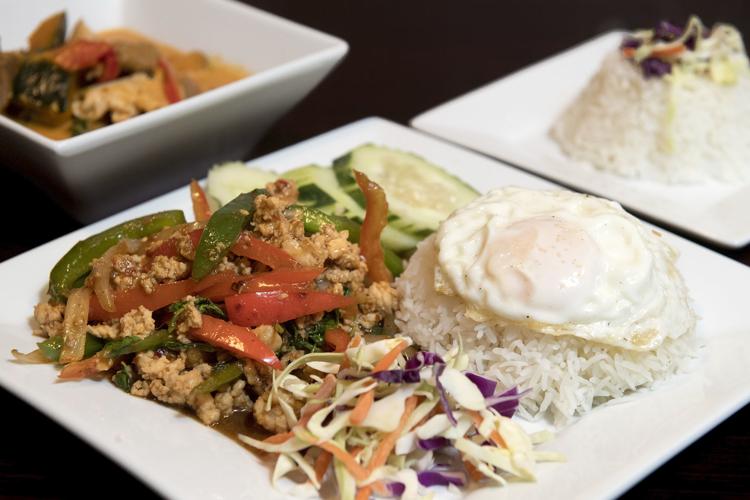 Pad kra pow, a dish of ground meat with bell peppers and onions, with a fried egg and rice at Seyo Thai, 501 W. A St. 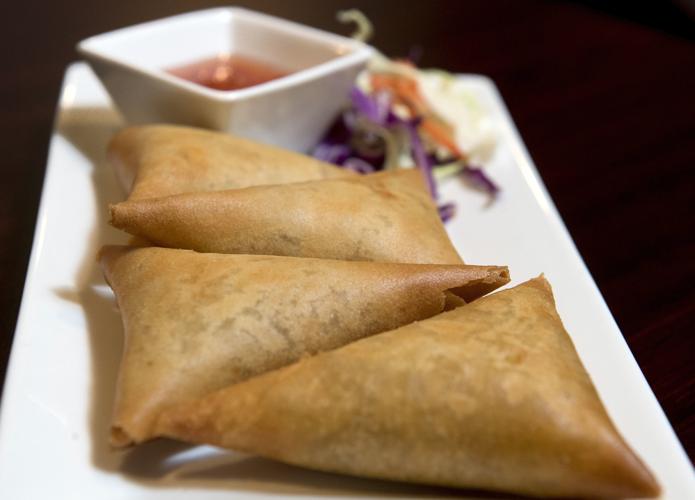 LSamosas with potato, curry powder and onion are on the menu at Seyo Thai. 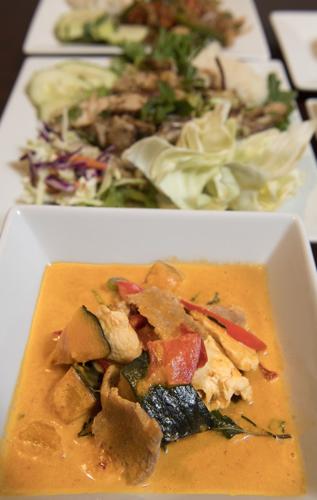 Phanaeng curry (bottom) with pork, beef and chicken, kabocha, red chili and coconut milk, is among the selections at Seyo Thai at 501 W. A St. 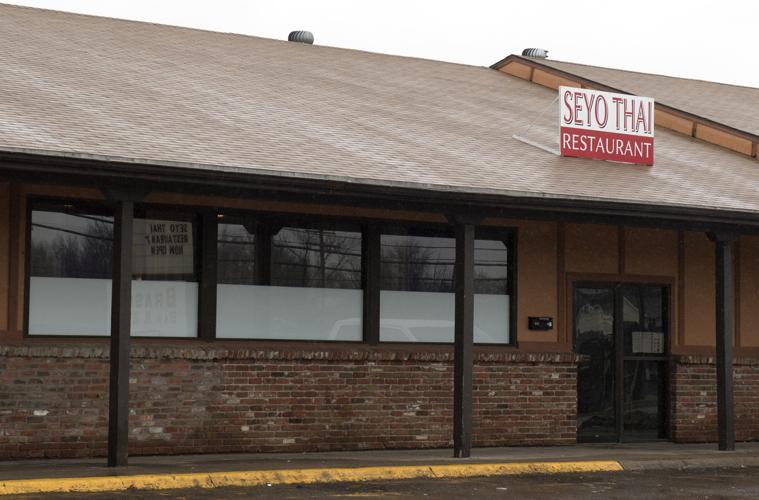 To say there’s a dearth of restaurants in west Lincoln may be a bit of an understatement.

That’s why the arrival of Seyo Thai Restaurant is a big deal. The eatery opened Jan. 22 in Village Square at 501 W. A St., next door to the new Braska Bar & Grill.

Seyo is run by Sarkapru Soe and her husband, Thabo. The couple also own the Asian market that’s in the strip mall.

Sarkapru, who is originally from Burma and has lived in the U.S. for 14 years, recently told the Journal Star she and her husband, who helps with the cooking, opened the restaurant because the area is underserved. The closest ethnic restaurant is Zhang’s near Coddington and West A.

“It’s been going OK,” she said. “It’s been so cold the last month, but the people who have found us seem to like it.”

On our visit, we started with chicken Thai spring rolls (four pieces, $3.99). They were light and crispy, a nice beginning to the meal. For entrees, I had the pad Thai and my wife ordered pineapple fried rice with chicken ($8.99). The portions were substantial.

My pad Thai with tofu included green onions, bean sprouts, peanuts (spooned in the corner of the dish) and lime wedges with the thin rice noodles. The dish was flavorful and too saucy, as some Thai places like to make it.

My wife’s dish featured yellow onions, carrots, cashews, raisins and curry powder with the rice and pineapple. The kitchen didn’t skimp on ingredients, with a fair amount of pineapple, cashews and raisins. It was a nice blend of flavors.

We ordered our dishes mild, and appropriately I didn’t break out in a sweat, which I do at any hint of spice. In reading recent Yelp posts, the kitchen can kick it up a few notches on medium, hot or Thai hot orders.

Our bill came to $24, a very reasonable price for a good, hearty and tasty meal. My wife even took home some of her dish. Grade: B+

The layout for Seyo is odd, primarily because it wasn’t designed as a restaurant. Our table, for instance, was in a hallway, with the table behind my wife sitting right in front of a door. The restaurant featured a main room with a handful of tables, the hallway with three tables and a small dining nook adjacent to the waiting area by the entrance. There was no sign at the door and nobody at the register, so we weren’t sure whether to grab a seat or wait. We waited. Then we were shown to the hallway. The decor included several paintings of fruit, including a couple large ones of pears. The print above our table was of the city of Jerusalem, which I also found strange for a Thai restaurant. Grade: C-

Service was a tad scattered -- my wife’s hot tea came without a tea bag and the appetizer arrived with no plates to eat from -- but, overall, pretty good. Our server knew the menu and my wife selected the pineapple rice dish based on our server’s knowledge. The appetizer arrived within minutes after ordering and our entrees minutes after that. Grade: B

Thai food is among the friendliest for gluten-free diners. Seyo’s menu includes several rice and curry dishes that are gluten free, ranging around $9 each. Check with your server to see if the restaurant is using or can use rice noodles for its noodle dishes. The vegetarian choices also are plentiful. Several entrees can be made without meat or with tofu, as I did with my pad Thai. Grade: A

University Place is going to get a couple of new businesses.

And then there were eight.

Dining Out: South 48th Bistro is a hands-on experience

The former Pizza Hut at 10th and Calvert streets, which has been vacant for more than two years, is apparently getting a new tenant.

Pad kra pow, a dish of ground meat with bell peppers and onions, with a fried egg and rice at Seyo Thai, 501 W. A St.

LSamosas with potato, curry powder and onion are on the menu at Seyo Thai.

Phanaeng curry (bottom) with pork, beef and chicken, kabocha, red chili and coconut milk, is among the selections at Seyo Thai at 501 W. A St. 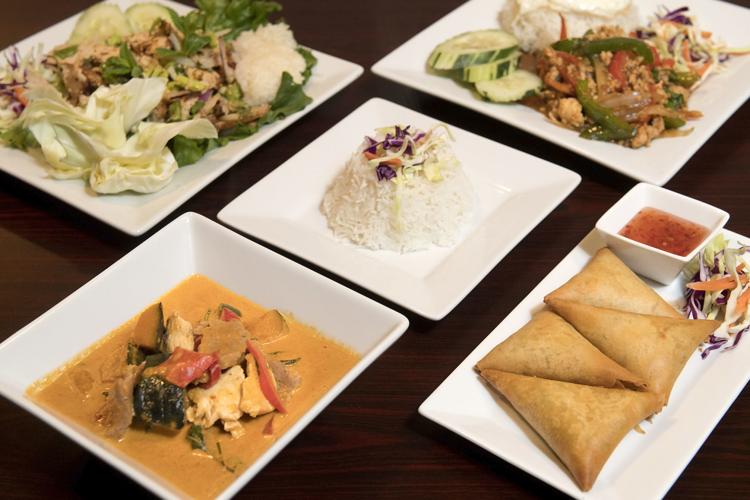 (Clockwise from bottom left) Phanaeng Curry, Yum Nam-tok, Pad kra pow and samosas, and rice in the center, are among the menu choices at Seyo Thai.