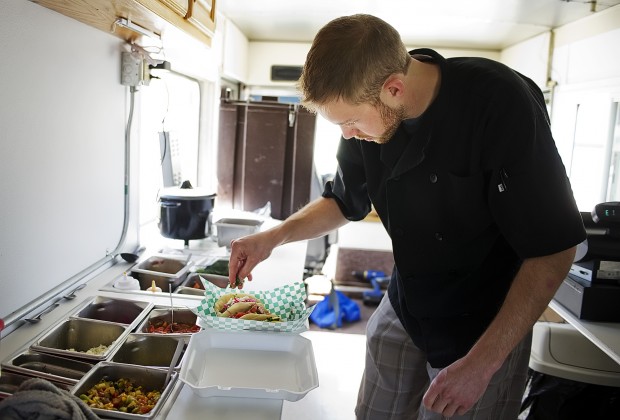 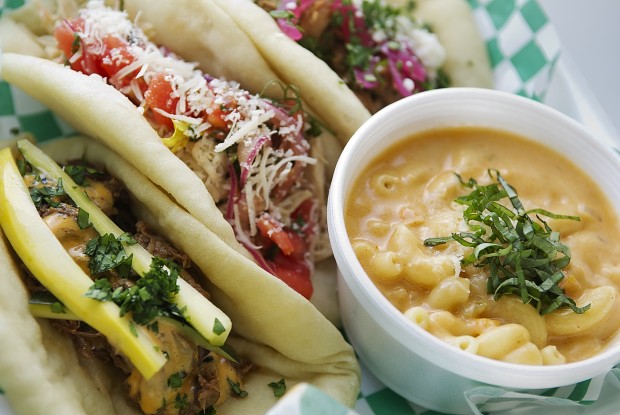 Lobster macaroni and tacos are a big hit at Lincoln's newest food truck, A la CARTe, which is run by Kevin Page and Bennett Martin. (JACOB HANNAH/Lincoln Journal Star) 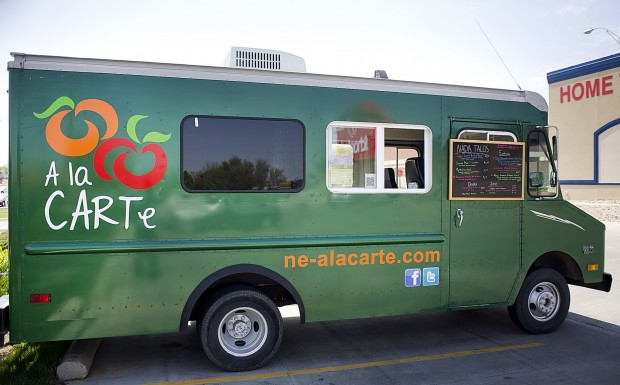 And now there are three.

The food truck craze continues to motor through Lincoln, with A La CARTe as the latest addition to the dining scene.

Opening March 19, A La CARTe is run by childhood friends Kevin Page and Bennett Martin, who both graduated from Lincoln East in 2001.

"We went our separate ways after high school, but we both ended up back in Lincoln," Page said. "We've been talking about a food truck for years."

Martin, who often provides food for events at Yankee Hill Country Club, already had a catering kitchen open just south of Princeton when a truck became available to him and Page.

Page's sister, who lives in Minnesota, saw one for sale in a city near her on Craigslist. A few phone calls later, Page and Martin had their truck, which is painted hunter green and bears the A La CARTe logo. The chefs use their kitchen outside of town to prep the food for the truck.

The duo's idea is to complement and not compete with the other two trucks already in operation in Lincoln. A La CARTe's menu features tacos -- with homemade "shells" -- pasta dishes, including customer favorite lobster macaroni and cheese, and salads.

The menu changes daily, with just a couple of items -- the mac ‘n' cheese and pork green chili tacos -- available all the time.

Because there is a city ordinance preventing food trucks from setting up shop on public property, A La CARTe, like the other two trucks, relies on private individuals and companies to give them space to operate.

Christ Place Church at 11th Street and Old Cheney Road has become a semi-regular home for them on Wednesdays and Fridays. The truck will be there for lunch this Friday. On Saturday evening, A La CARTe will be a part of the food truck festival at 27th and O streets.

A La CARTe's pork taco and lobster macaroni and cheese are permanent menu items for good reason -- they are tremendous.

Martin and Page created the lobster mac ‘n' cheese to use up some leftover lobster stock. The dish was an immediate hit, Page said. The cheese sauce is subtle, meaning it's not a rich sauce that smothers the pasta. It is one of the "lightest" mac ‘n' cheeses, I've ever had. It's served as an entree ($8.50) or as a side ($4).

The pork green chili taco is my favorite. The taco features seasoned, shredded pork topped with pickled red onion, queso fresco and cilantro. Here's the kicker: The shell is not a tortilla but rather a small pitalike bread. Martin developed the shell based on an Asian steam bun. It's soft and spongy -- almost pancakelike -- and very, very good.

Tacos are $2.75 each and usually include a beef, pork, chicken and vegetarian option. The taco fixings also are available atop gluten-free rice.

One of my co-workers ordered the penne pasta with morel mushrooms (It's that time of year for morels to be harvested). She, too, was quite impressed. It features a light, cream sauce with the tasty, hand-picked morels. Grade: A

A La CARTe is a two-person operation with either Page or Bennett manning the window and the other prepping food. The pasta is made beforehand and kept warm as are the meats for the tacos. Turn-around time usually is 2 to 3 minutes, depending on the size of the order. Grade: A

I'll use this part of the review to offer a suggestion to A La CARTe and the other two food trucks: Carry card tables and chairs with you.

I'm not sure if the trucks have room for them, but if so, a couple of fold-up tables and chairs to go with them would give patrons an option to sit down and eat their food right away. It's just a thought. Grade: Not applicable

Nearly half or more are vegetarian options. This past week, for instance, the menu included a taco with rosemary-braised white beans and a grilled zucchini salsa ($2.75), a penne pasta with freshly picked morel mushrooms ($4 or $8) and the lobster mac ‘n' cheese. Grade: A

Lobster macaroni and tacos are a big hit at Lincoln's newest food truck, A la CARTe, which is run by Kevin Page and Bennett Martin. (JACOB HANNAH/Lincoln Journal Star)