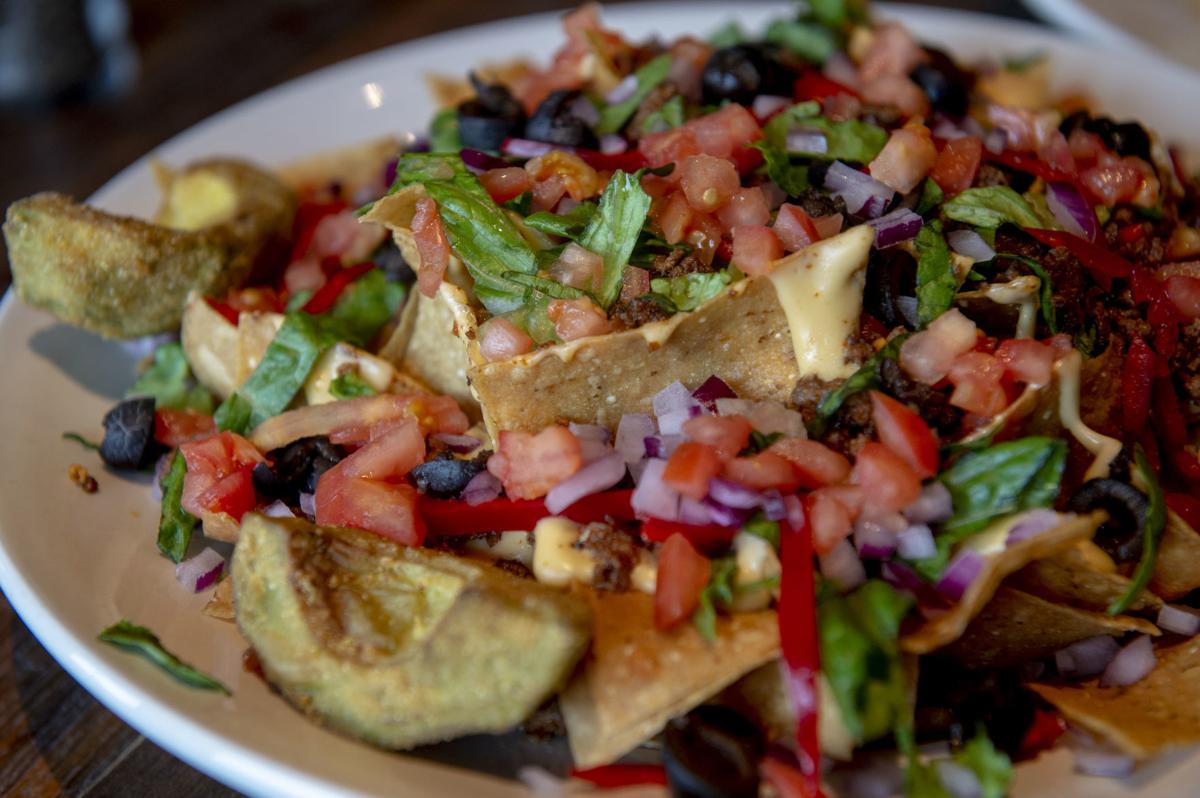 Toasted nachos is a mainstay on the Toast menu. 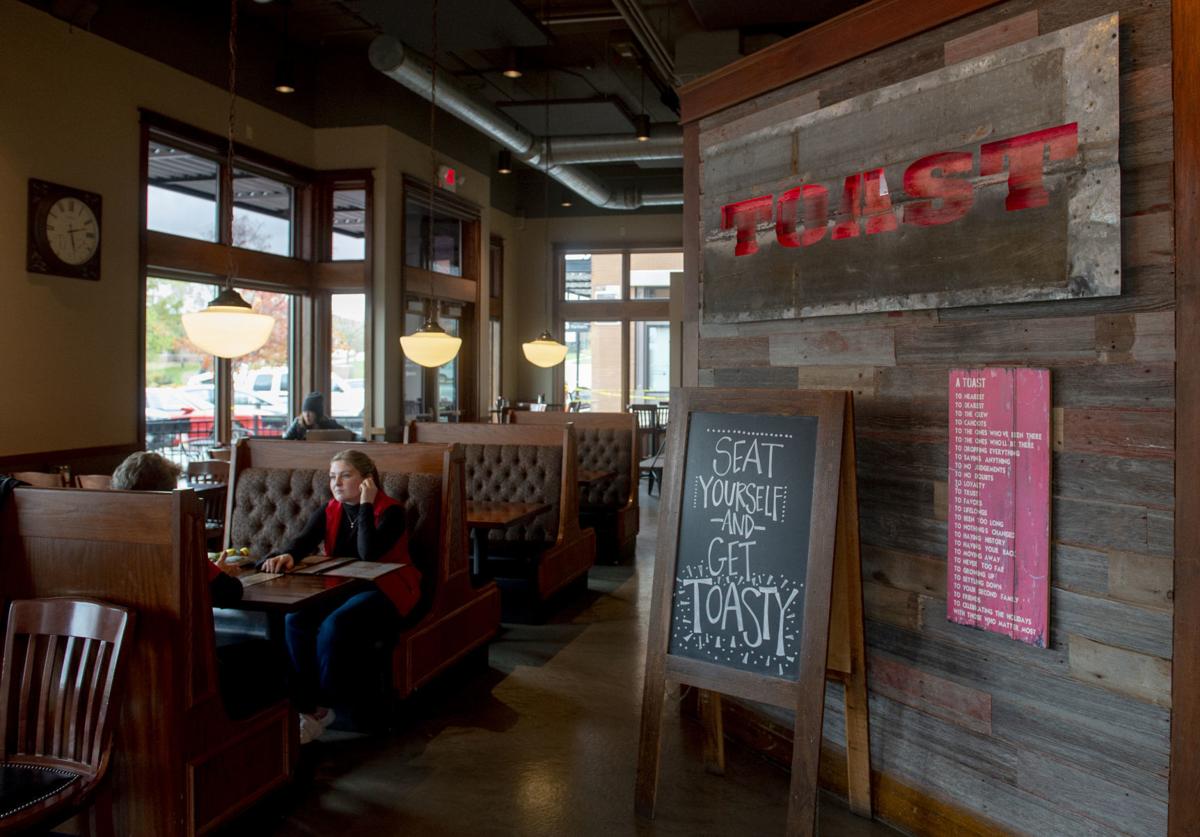 The light fixtures and woodwork throughout Toast, 570 Fallbrook Ave., have been repurposed from locations such as Whittier Junior High School. 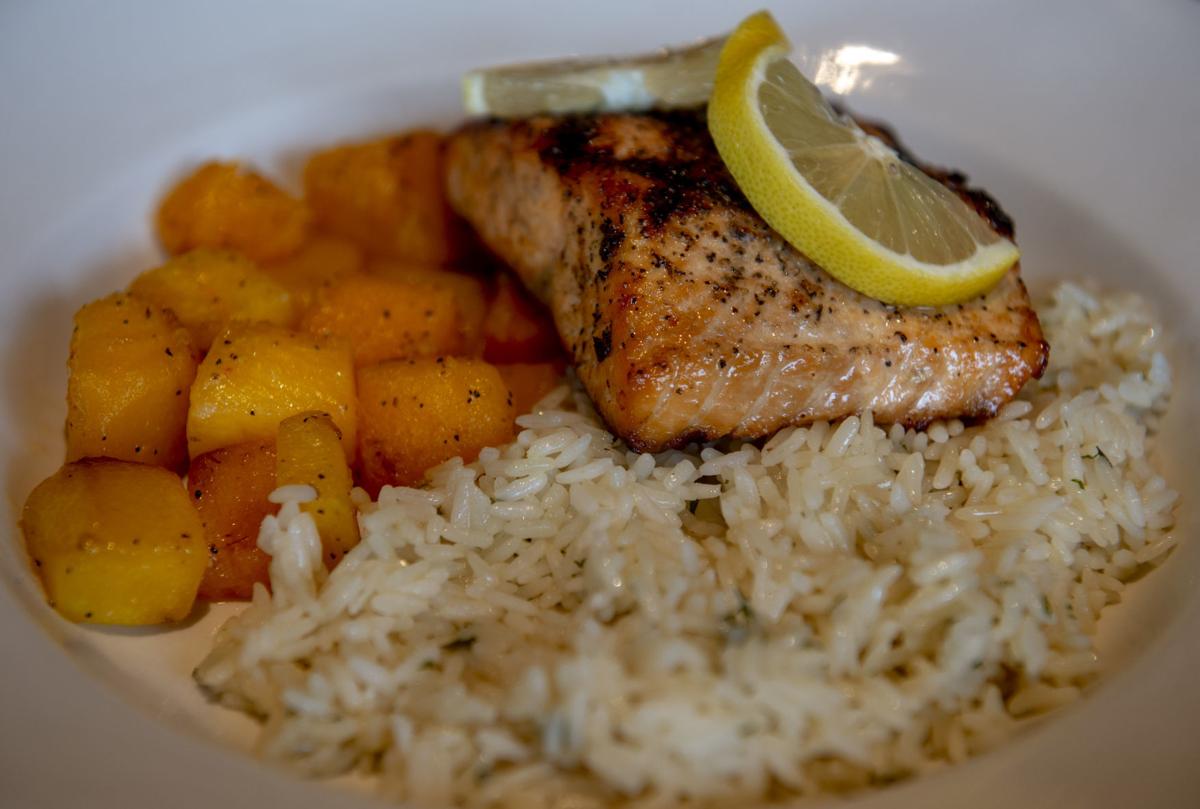 The fresh salmon entree is served with seasoned white rice and a seasonal vegetable. 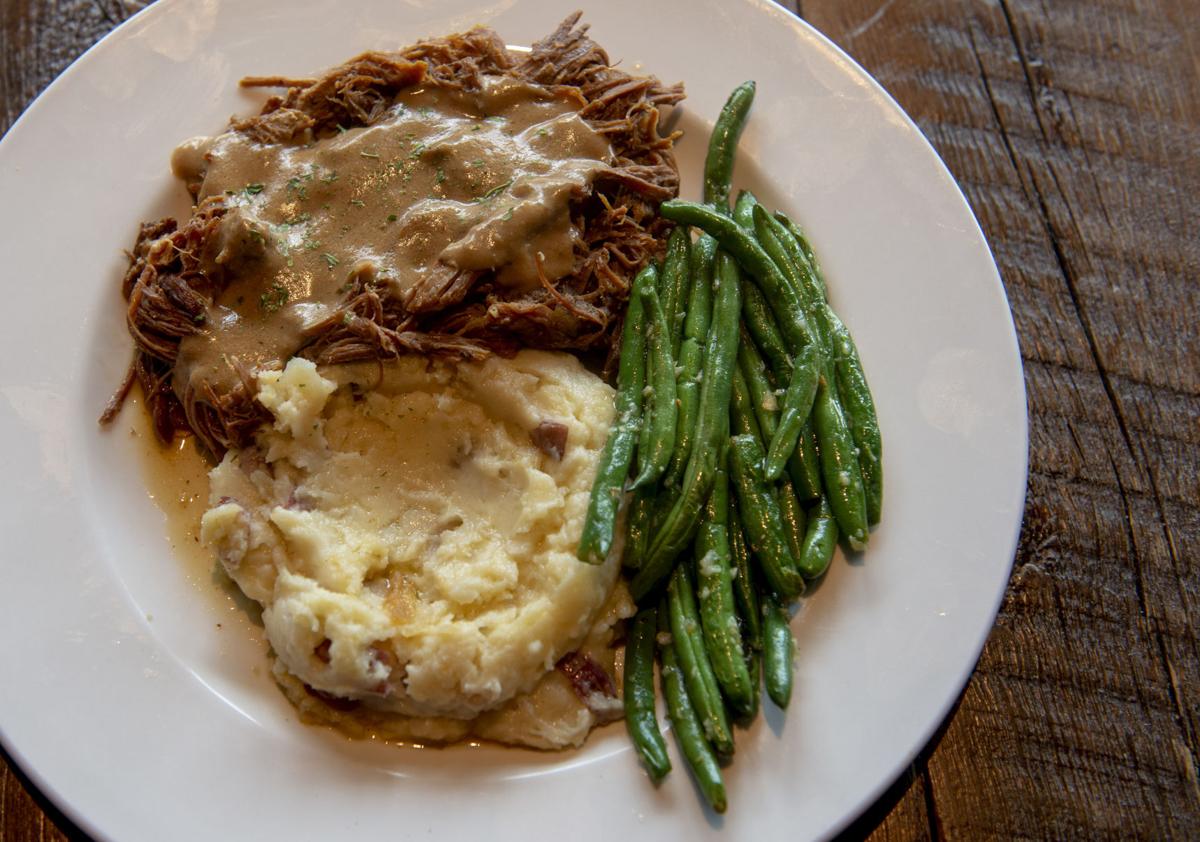 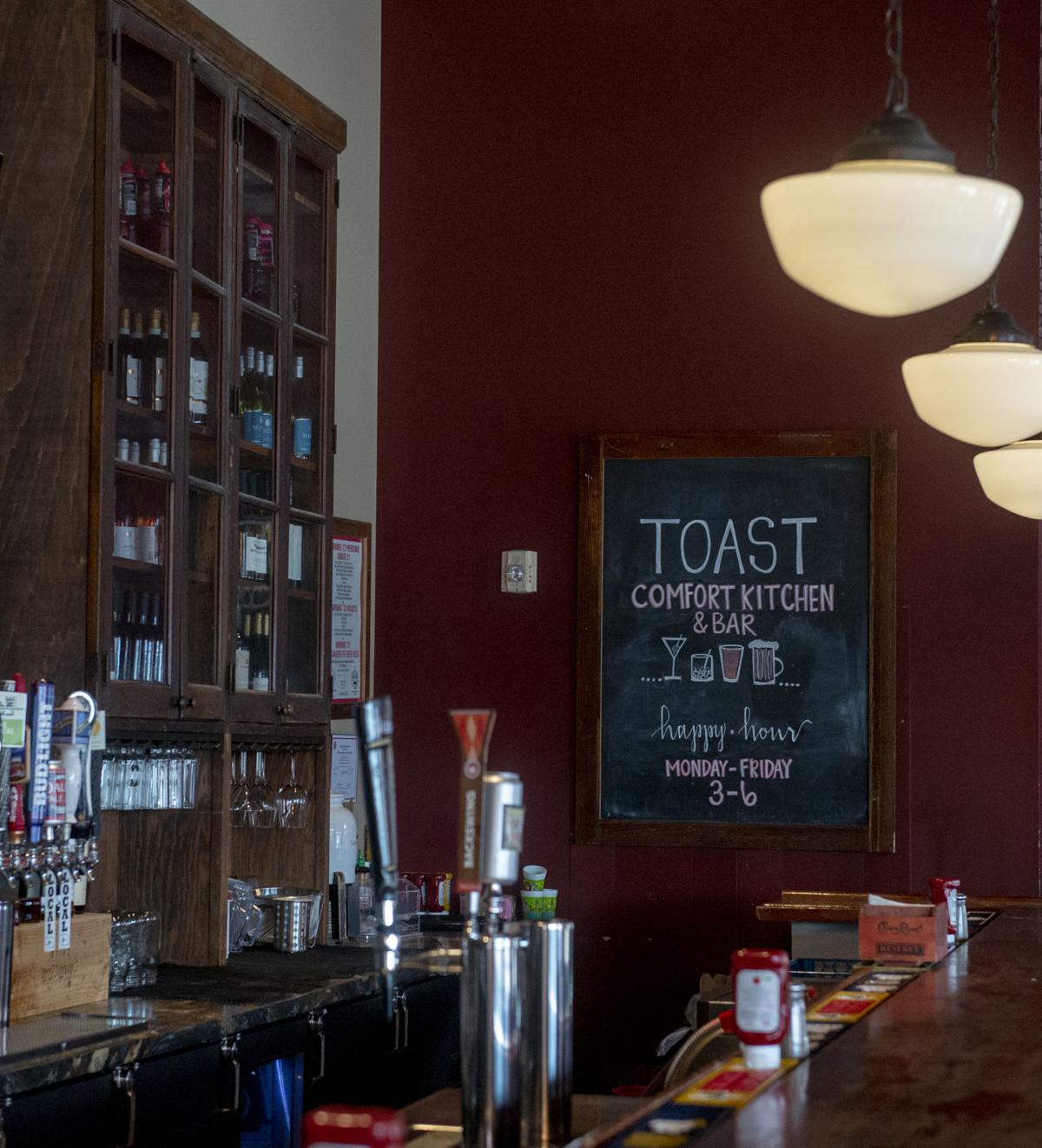 Wood adorning the liquor cabinets at Toast comes from the Burlington Station in Omaha. 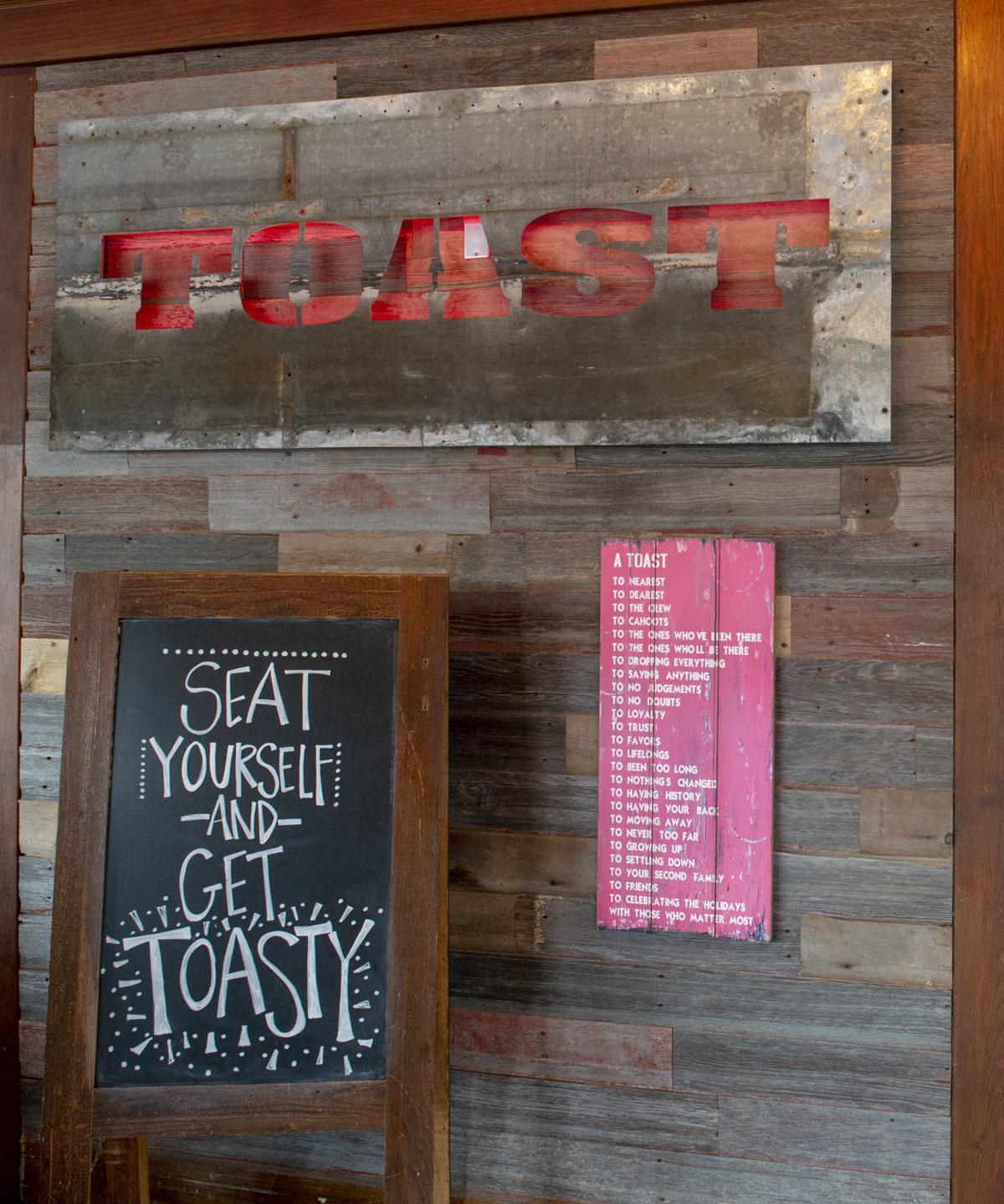 The entrance of Toast, 570 Fallbrook Ave. 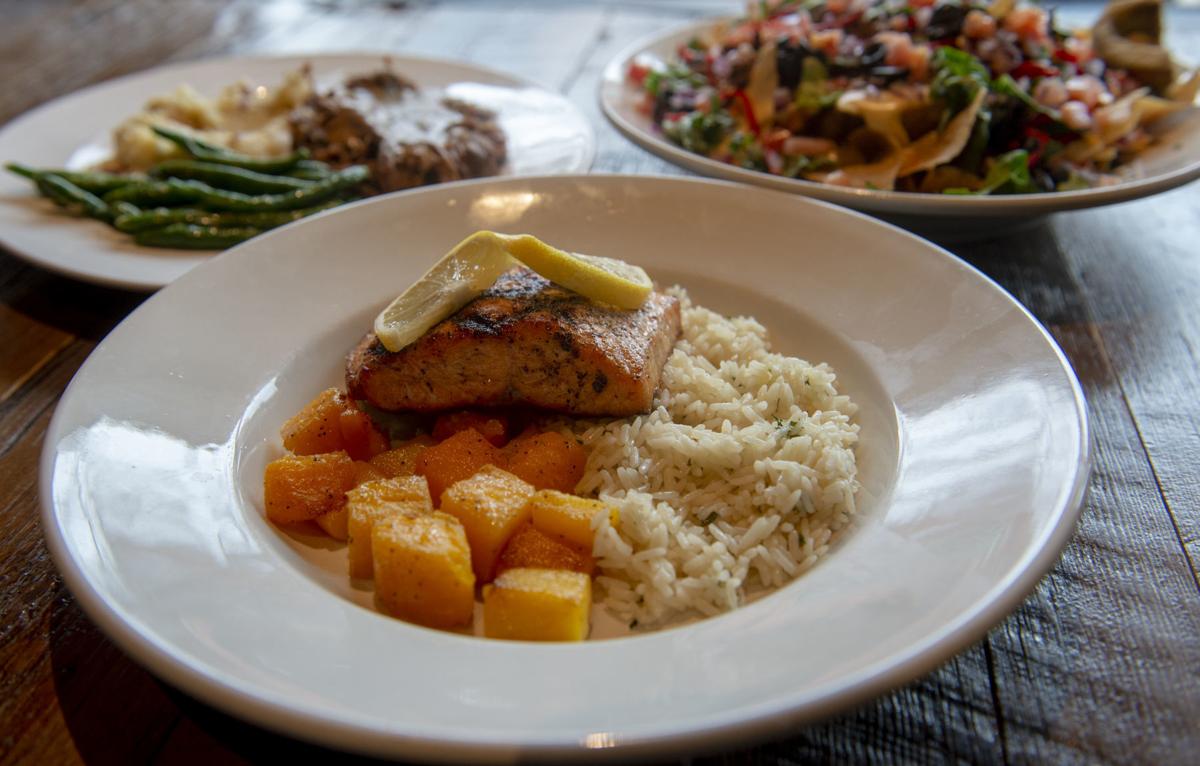 But on Oct. 5, the restaurant celebrated its 10th birthday.

My, how time flies.

“It’s absolutely crazy that it’s been that long already,” co-owner Tony Young said. “We went through a number of expansions and format changes until we finally hit on something that appeals to the neighborhood and community.”

Toast is owned by Tony and Wendy Young and Mike Martin, who make up Red Herring Concepts, which also operates LeadBelly in Lincoln’s Haymarket and Omaha’s Midtown Crossing.

“When we added burgers and fries that kind of became the tipping point,” Young said.

Today, Toast’s menu is a mix of gourmet sandwiches -- the pot roast sandwich is a must-try, as is, according to Young, the French dip -- and signature burgers, steaks, seafood and a nice selection of comfort food favorites such as meatloaf, stroganoff, macaroni and cheese and country fried chicken.

The comfort fare comes with Toast’s unique take. The country fried chicken, for instance, is topped with a brown ale Gouda sauce and the appetizers include green beans, breaded and fried, and served with ranch dressing.

I loved my pot roast sandwich. It was so juicy it totally soaked my bun. I told Young it was like eating a French dip but without the dipping.

We started our meal with cheddar ranch muffins ($6.49). The bite-sized muffins were served with pecan-smoked bacon jam. The combination of which made the jam, well, pretty salty. We liked the muffins alone.

Toast deserves kudos for its side selections that accompany entrees, burgers and sandwiches. In addition to the standards (fries, seasonal veggies, cottage cheese), side items included a roasted red pepper hummus with tortilla chips, a Parmesan artichoke dip with tortilla chips, a vinegar-based Georgia-style coleslaw and garlic green beans. Grade: A-

Toast offers four distinct seating areas. The main one, just opposite the bar, is the most popular with low- and high-top tables, plus chairs at the bar. You’ll find a couple of TVs here usually tuned to a sporting event.

There are two other dining rooms as well as shaded seating outdoors. The dining room to the left as you enter is TV-free, while the large one just past the bar is great for large groups. The big one also has booth seating.

Rustic comes to mind to describe the look, especially with all the wood. Historic also is a good adjective. Some of the restaurant’s baseboard, window and door trim is reclaimed wood from Lincoln’s Whittier Junior High School, while some of the cabinetry behind the bar is from Omaha’s Burlington Station.

Of course, with it high ceiling and hard surfaces, it can get noisy, especially when it’s crowded. Grade: B+

My wife really wanted a second glass of wine, so when our server didn’t return after delivering our food, my wife finally headed to the bar to get herself one (I know I should have gone, but she was up and on her way before I knew it).

That was unfortunate because our service up to that point had been stellar. Our server was friendly and quick with suggestions from the bar and menu, and the turnaround times on our appetizer and entrees were extremely quick.

Our server became busy with other tables in her section because she also forgot about the box my wife requested for her sandwich, which another server eventually brought to us. The point here is the follow-through is as important as stepping up to the plate. Grade: B-

Toast offers several vegetarian and gluten-free options, with each item designated with a “v” or a “g.” Toast also uses a plus sign to note ingredients with gluten in dishes that, at first glance, may appear to be gluten-free.

Vegetarian dishes include a “grown-up” grilled cheese ($8.49) with smoked Gouda, Swiss and cheddar cheeses on Vienna wheat berry toast, a toasted macaroni and cheese ($10.49), a cranberry almond salad ($9.49) and housemade veggie burgers substituted for no additional charge in the signature burger lineup. Gluten-free buns are available for $1 extra.

Dining Out: The burgers you (HF) Crave with a bigger, full-service location in Lincoln

One of Lincoln’s best hamburgers is being served from a new location.

Dining Out: Woodcliff's onion rings are worth the journey

ST. PAUL, Minn. — Krispy Kreme has reached an agreement with a Minnesota college student who drove to Iowa every weekend to buy hundreds of do…

Aroma Indian Cuisine: Made from scratch and 'not a single complaint'

“People say that they have never had food like this. I get goose bumps on my arms, and I feel big and good.”

A packed Park Centers Banquet Hall signaled the start of the holiday season on Sunday afternoon.

As North 27th Street continues to develop, more family-operated restaurants are popping up.

Toasted nachos is a mainstay on the Toast menu.

The light fixtures and woodwork throughout Toast, 570 Fallbrook Ave., have been repurposed from locations such as Whittier Junior High School.

The fresh salmon entree is served with seasoned white rice and a seasonal vegetable.

Wood adorning the liquor cabinets at Toast comes from the Burlington Station in Omaha.

The entrance of Toast, 570 Fallbrook Ave.