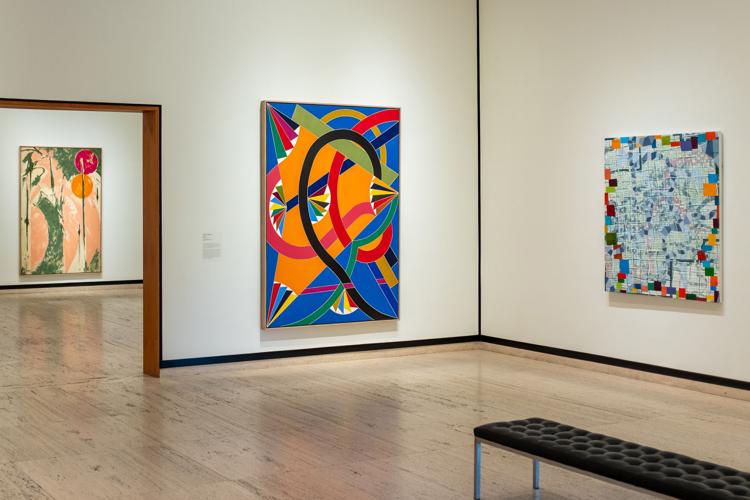 “Point of Departure” surveys abstract art from 1958 to the present and includes works by, from left, Lee Krasner, William T. Williams, and Lisa Corinne Davis." 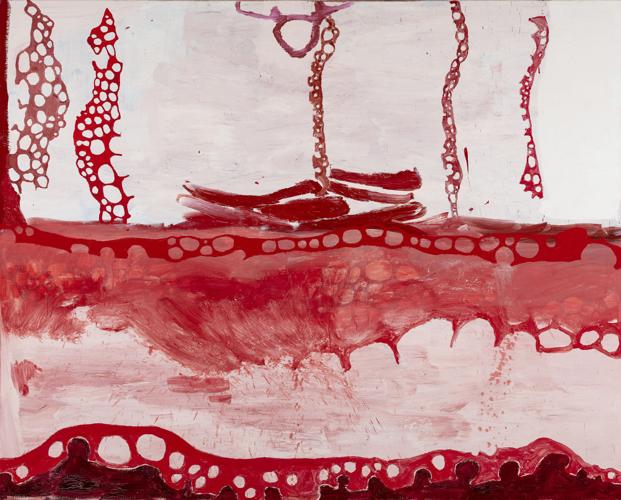 “Point of Departure,” the fall’s major exhibition at Sheldon Museum of Art, takes its name from a 1964 album by jazz pianist Andrew Hill, a recording that reaches back toward Bach, but nearly 60 years after it was recorded, continues to point to the future.

In similar fashion, the paintings that fill Sheldon’s north galleries reach back to a point just after abstraction’s mid-20th century peak and take non-objective painting forward for six decades, pointing toward what is yet to come.

Impressively, the visually striking, intellectually and historically rich exhibition is primarily drawn from Sheldon’s collection of 20th and 21st century art that is unmatched by any other university museum in the country.

“We have so much abstraction and we’re well known for abstraction, starting in 1910,” said Wally Mason, Sheldon’s director and chief curator. “We shifted from abstract painting to abstract sculpture during George's (Neubert) tenure. But we always acquired some. In my time, this is something we’re continuing to do.”

In using 1958 as its starting date, Mason, who curated the exhibition, ensured that “Point of Departure” would include little work from the “first generation” of abstract expressionists, excluding oft-seen Sheldon gems by Mark Rothko, Willem deKooning, Barnett Newman, Clyfford Still and Robert Motherwell.

That opened the door for paintings like John McLaughlin’s Zen-rooted, hard-edged, black-and-white blocked “#1, 1965” to come out of storage and onto the museum’s walls. Also a handful of new acquisitions, including Terry Winters’ striking wall-sized 1991 “Event Horizon” and Ron Gorchov’s raw, saddle-shaped 1986 “Capital” to make their Lincoln debuts.

And, by moving forward from the mid-century, Mason freed abstraction from its white, male roots, presenting a diverse exhibition with 40% of its works by women and paintings from Black, Puerto Rican, Cuban and African artists.

All of that is unintentionally captured on one gallery wall where the exhibition’s oldest painting, Norman Lewis’s 1958 “Untitled,” shares a wall with its most recent, Lisa Corinne Davis’s “Deductive Data,” which was completed earlier this year.

Lewis, the only Black painter among the first generation of abstract expressionists, used layers of light paint over color to create his hazy painting, while Davis works in blocks, emphasizing the grid that underlies much abstraction. Both have palettes that, to some measure, reflect their heritage.

More directly, however, Donald Odili Odita’s 2010 “Passage” utilizes a distinctly African palette, juxtaposing colors in manners unlikely in a European-rooted painting with sharp shards of color angling up the canvas.

That sort of juxtaposition of shapes and colors can also be found in the city-scape inspired “Carome,” a circa-1970 painting by Mavis Pusey, a Jamaican native who has been one of the leading abstract painters in New York since the late ‘60s.

The exhibition’s best-known artists and most familiar paintings are Peter Halley’s 1999 “Colortron” and Lee Krasner’s 1969-71 “Invocation,” the image that adorns the cover of Sheldon’s most recent paintings catalog.

Displayed under heightened lighting, Krasner’s large, vertical semi-abstraction that uses nature-derived imagery, emphasizing its calligraphic qualities and jagged edges, has never been better seen in the nine years since it was acquired by Sheldon.

There’s also a painting of local interest, the wall-sized “Holiday in Blue,” a 1993 work from Cozad native Dan Christensen that, with its four ovals in a blue field, vividly displays his innovative “post-painterly” technique, using a spray gun to create his paintings.

As evidence of its richness, “Point of Departure” can be analyzed from multiple angles.

A study of line in abstraction, for example, contrasts the vibrating vertical stripes of Ross Bleckner’s 1986 op-art “The Past Tense of Light” with the pink and light green curving gestures of Sue Williams’ 2001 “Cutie Pie” and the soft collisions between passages in Jill Nathanson’s 2019 color-field “Cantabile.”

“Cantabile” also triggers a look at the exhibition’s connections to abstraction past -- the influence of Helen Frankenthaler's poured-paint work from the 1950s on Nathanson’s work is unmistakable.

The red-and-pink palette and bubble-like forms of late-period Philip Guston can be seen in Winters' painting, which suggests a landscape or an underwater view. And taking influence in the opposite direction, Gorchov’s curved canvas construction that stands out off the wall clearly inspired the work of, among others, Elizabeth Murray.

Then there’s a look at process, be it the painstaking painting of tiny black, grey and white squares that merge into a deceptively “moving” whole in Puerto Rican artist Tony Bechara’s 2008 “May 22,” or the “Untitled” 1975 narrow, highly vertical-lined piece that, obviously, was cut from wide, long canvas.

Those elements, and a plethora of others, make “Point of Departure” an exhibition that, for abstraction aficionados, will demand multiple visits to suss out everything the exhibition has to offer.

But a single stop during the exhibition’s run through December should be a rewarding experience -- an opportunity to see a smartly curated, diverse yet representative cross section of abstraction of the last 60 years that, notably, resides in Lincoln.

Michael B. Jordan was offered directing tips from Bradley Cooper and Denzel Washington

Michael B. Jordan was offered directing tips from Bradley Cooper and Denzel Washington

“Point of Departure” surveys abstract art from 1958 to the present and includes works by, from left, Lee Krasner, William T. Williams, and Lisa Corinne Davis."