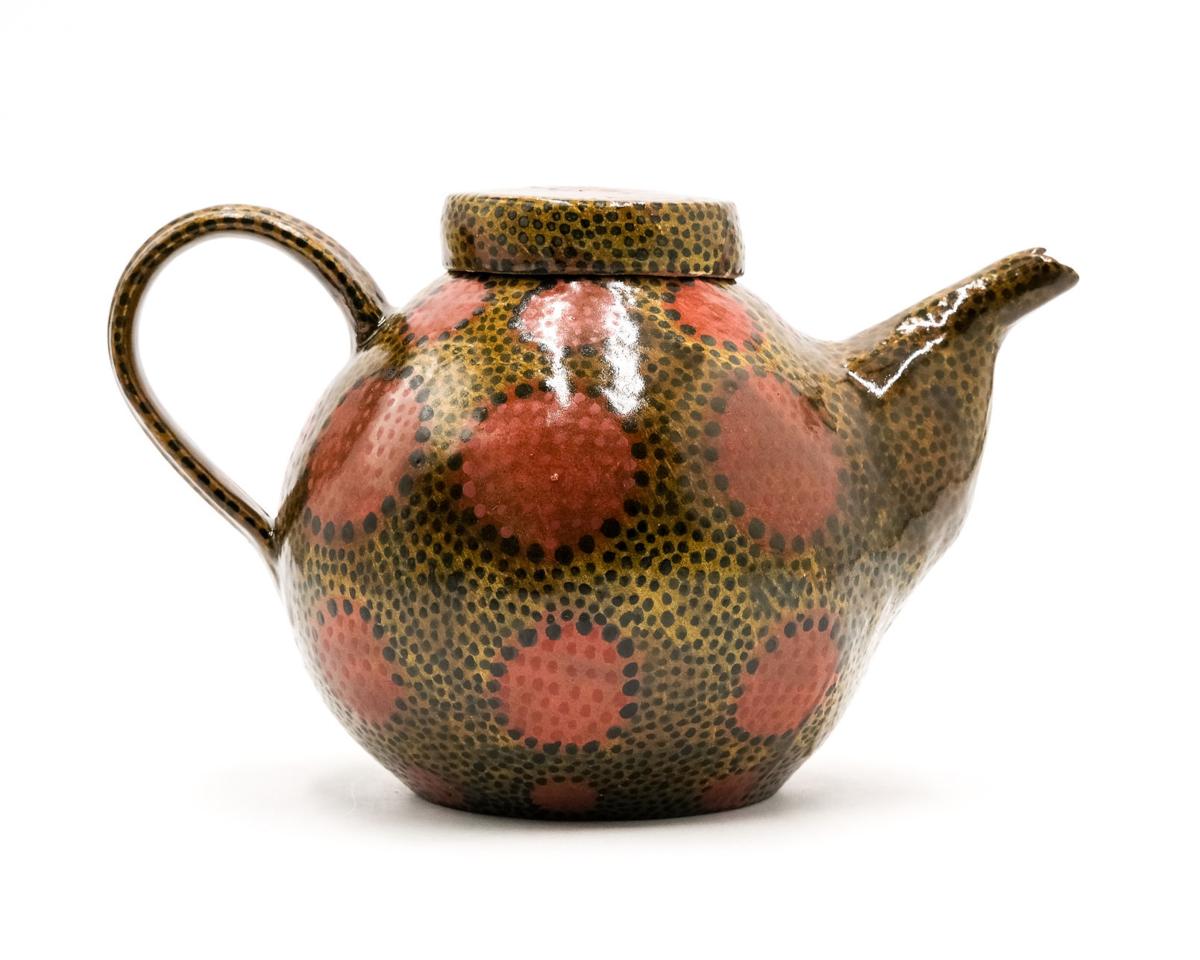 This teapot by Lincoln potter Gail Kendall is part of the Lux Center for the Arts exhibition "Here & There." 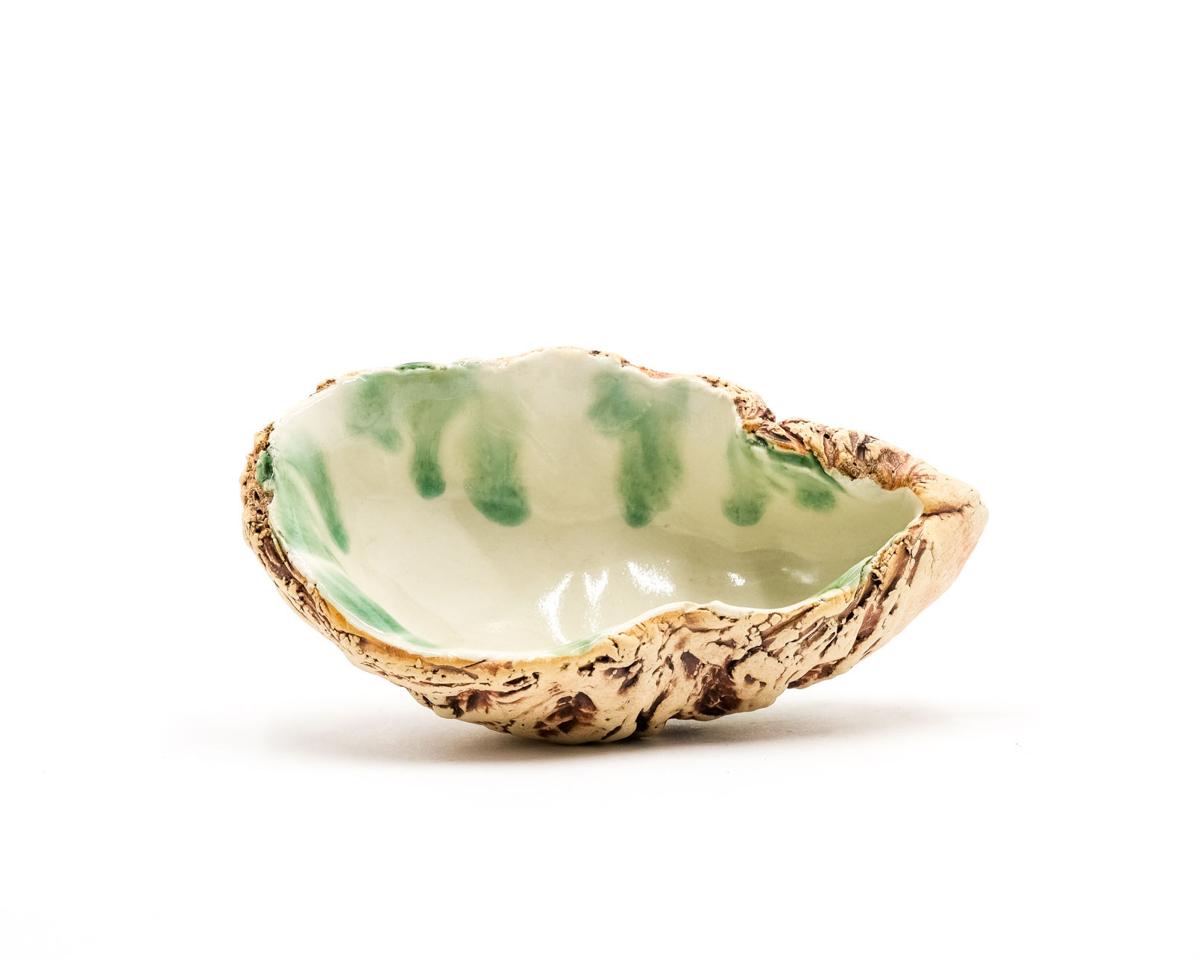 This serving dish is part of Sean Scott's "Mollusk Platter" from the Lux Center for the Arts exhibition "Here & There."

At it’s best, pottery can become functional fine art, imaginatively designed and crafted objects that just happen to be bowls, cups and teapots.

Such is the nature of the work in “Here and There,” an Lux Center for the Arts exhibition of the work of three potters, Gail Kendall, University of Nebraska-Lincoln ceramics professor emeritus and two former students she invited to show with her -- Chandra DeBuse and Sean Scott.

The show gets its title from the geography of the potters -- Kendall is the here, DeBuse, a NWU grad and special UNL student is now in Kansas City while Scott, a 2005 UNL MFA grad, is in Minnesota.

There are, however, connections between the works, starting with the decorative patterns found on the majority of the pieces, be they Kendall’s signature dots or in the case of her cleverly titled urn “Unstriped,” stripes.

It’s next to DeBuse’s “Floral Jar” which is covered with flowers, another natural motif found among the 35 works that perfectly fill Lux’s small east gallery.

Other works take that pattern farther -- Kendall’s “Landform II” appears to have maps glazed onto the bottom of the bowls while DeBuse’s “Tumbler with Bugs” is just that -- a tall tumbler adorned with insect images.

The tour de force of the show, however, belongs to Scott. It’s title “Skully Tea Pots, Cups, Aroma Cup and Skully Tray” doesn’t quite explain the tea set, which has a tiny skull on top of the square lid of the teapot, which along with the cups, sits on a raised, green skull shaped base complete with cutout eyes, etc.

The small element atop the piece technique is repeated in DeBuse’s exquisite small green “Cellar with Squirrel Spoon” which is topped by a tiny squirrel.

Also well worth noting is Scott’s “Mollusk Platter,” a large piece that finds five shell-shaped serving dishes with curved edges and green stripes that sit on an elegantly shaped platter, awaiting, as it were the snails and mussels it is to contain.

For as captivating as the pieces are visually, it’s critical for pottery like the “Mollusk Platter” to also be functional.

And the works on view all fit well, feeling good in the hand -- yes, you should touch the art in a pottery show -- and clearly suited to in the case of Kendall’s “Ice Cream Bowls” hold the frozen treat.

Lastly, and perhaps assumed, all the works from the three potters are, regardless of the glazing, the rawness of the clay and the shape and size of the vessels, superbly crafted. That is the final element that makes them fine examples of pottery as functional art and makes “Here & There” an exhibition worth seeing before it closes at Lux, 2601 N. 48th on Nov. 26.

Library Director Denise Lawver bought the drawing by C.W. Anderson, one of Wahoo’s Five Famous Sons, at an estate sale and then donated it to the Wahoo Public Library to be displayed on a wall dedicated to Anderson's work.

Leading Off: The voice of Christmas — past, present and future — is coming to Lincoln this weekend

Two years ago, Dick Terhune embarked on a passion project. In the spirit of a handful before him -- Charles Dickens, most notably -- he launched a one-man performance of "A Christmas Carol."

Leading Off: Wherever it came from, Lincoln High senior has some musical talent

Zeph Siebler was recently named one of a dozen national winners in the 2021 Musical Theater Songwriter Challenge. The competition featured more than 150 entries from 32 states.

Mystery surrounding Nebraska artist's painting is solved, but not who will own it next

Leading Off: Weekend show will celebrate the return of theater in Lincoln, and everywhere

This weekend, nine area community production companies will present "All Together Now," a global event created by licensing agent Musical Theatre International to celebrate the return of community theater.

Nebraska artist Dale Nichols’ missing painting is now hanging in a David City museum, a happy ending to a mystery of more than 80 years.

This teapot by Lincoln potter Gail Kendall is part of the Lux Center for the Arts exhibition "Here & There."

This serving dish is part of Sean Scott's "Mollusk Platter" from the Lux Center for the Arts exhibition "Here & There."