Bob Dylan and Walt Whitman, Eugene Delacroix and Gerhard Richter, Native lands and flags and Jasper Johns. Those are just some of the influences that flow through “Real in Itself,” Aaron Holz’s 17-painting Kiechel Fine Art exhibition.

Some of those influences, like Dylan and Whitman, are inspirational. Some, like Richter and Charles Scheeler, are visual and technical. Some, like Delacroix and the flags, a Johns’ influence, are both.

None, beyond the flags, can be explicitly seen in the show’s 14 abstractions. And the figurative works – three paintings of flowers – add more specific references to those influences while serving to enhance by contrast the complicated abstractions that work through geometry, depth, shifting perspective and color.

Flags provide the form of the panels onto which Holz applies layers of paint, pulling some of it around with a squeegee a la Richter. And the Native flags themselves – sometimes elongated, sometimes cut into tiny triangles, show up across the surface of the paintings, driving their dynamic visual flow.

“Turtle Island,” “Pine Ridge” and “Winter Camp” take their titles from Native lands. But the specifics of the island on the Minnesota River or the South Dakota landscape have disappeared, subsumed inside an atmospheric base that suggests landscape, rather than showing the features a la Holz’s earlier series of works that found “Chimney Rock” clearly identifiable in the center of the painting.

In light of the current overheated discussion of cultural appropriation, it needs to be noted that Holz’s paintings are not a white painter improperly taking imagery from and representing Native culture. Rather, they’re created sympathetically, identifying with the pipeline protests in “Winter Camp” and “Turtle Island.”

That socio-political subtext also enters the paintings via Dylan, Whitman, and, by reflection, Delacroix.

As he worked on/thought about the paintings, Holz repeatedly listened to Dylan’s “Murder Most Foul,” a 17-minute song that in addressing the assassination of President John F. Kennedy brings in the dark side of American political and cultural history.

On The Beat: Jerry Lee Lewis at long last gets into the Country Music Hall of Fame

One of the paintings, the green-saturated “Love Field,” takes its name from the Dallas airport where JFK landed on Nov. 22, 1963, and implies the “grassy knoll” where some believe a second shooter took part in the assassination.

The works of Whitman, the 19th century poet and essayist, provided an opposite view from Dylan’s, a celebration of America that also underlies the paintings.

The Delacroix influence, technically and in subtext, comes from “Liberty Leading the People,” his 1830 painting commemorating the French Revolution. For Holz, that chaotic work, with flags, echoed with the Jan. 6, 2021 insurrection that sent Confederate and Trump flags into the Capitol in a failed attempt at anti-democratic revolution.

Those influences, obviously, can’t be directly seen in the paintings. But “Liberty Leading the People” contributes to the largest abstractions as Holz used a triangular shape that goes around Liberty as an underlying form.

The smaller abstractions don’t use the triangle. But all explore a push and pull between surface and background and find landscape elements, like clouds, fading and blurring into the underlying atmosphere.

That atmosphere is covered with a geometric layout that’s sometimes easy to see, and in others only visible on close examination, and the surface is enlivened by the flags that create motion, whether in a strong direction or crashing together against a center line.

Color is the final component of the paintings that is given varying spins by Holz, avoiding blues on some works, seeing how much blue can be used in others, finding faint yellow as the base of one piece, bright greens dominating another.

Picking and Booking -- Lied Center puts together its 2022-23 season

And through all, pieces of color emerge, peeled out of the layers of paint that create texture and depth.

All those elements except color, along with an intentional randomness, combine in “Many in One." This gray tour-de-force sees the elongated triangular flags flying mostly to the right, with triangles emerging from squares across the panel over the atmospheric layers of paint that is pocked by dark circles created by applying turpentine that randomly removed some of the layers.

As for the three figurative paintings, all are of flowers – one, the white “Cherokee Rose,” is another reflection on Native history – it represents the Trail of Tears, the forced displacement by the U.S. government of more than 60,000 Native people across the Southeast in the 1800s.

Viewed side-by-side in Holz’s studio in Richards Hall, where he is a University of Nebraska-Lincoln professor of painting and drawing, the paintings carry on a lively discussion of form and motion, color and pattern, texture and scale and, to a lesser degree, figuration and abstraction.

From Pinewood to Pinnacle: Earth, Wind & Fire concert moves inside for the second time

Seen individually in the gallery, the discussion is quieter, allowing each of the paintings to reveal its lyrical complexity, captivating motion and depth, as Holz has succeeded in matching the quote from early American modernist painter Arthur Dove that gives the show its title:

"I would like to make something that is real in itself, that doesn’t remind anyone of any other things, and that does not have to be explained like the letter A, for instance.”

Valley Farm Between the Bluffs

The Young Corn God Weeping for His People

What: "Real in Itself" - paintings by Aaron Holz

New Kids on the Block transport fans back to the 1990s

At 8:30 p.m. Saturday, fireworks sent the Pinnacle Bank Arena calendar pages flying back to, say 1990, as New Kids on the Block hit the stage …

Jessica Simpson was pursued by 'massive movie star' in mid-2000s

Jessica Simpson was pursued by 'massive movie star' in mid-2000s 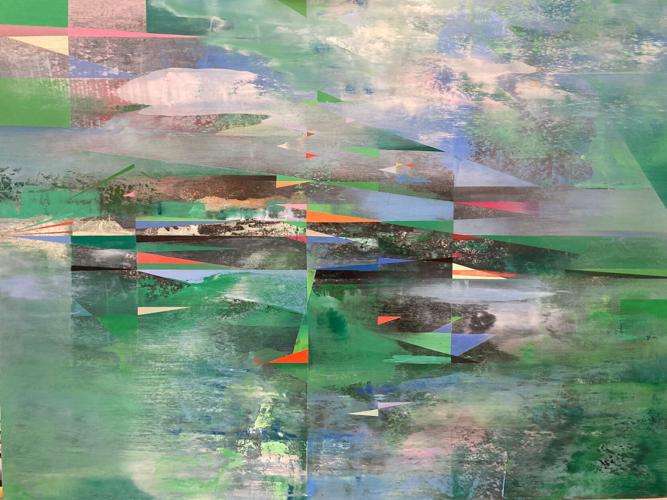 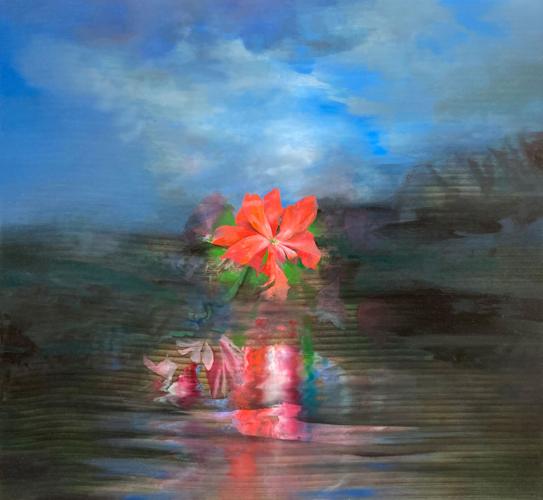 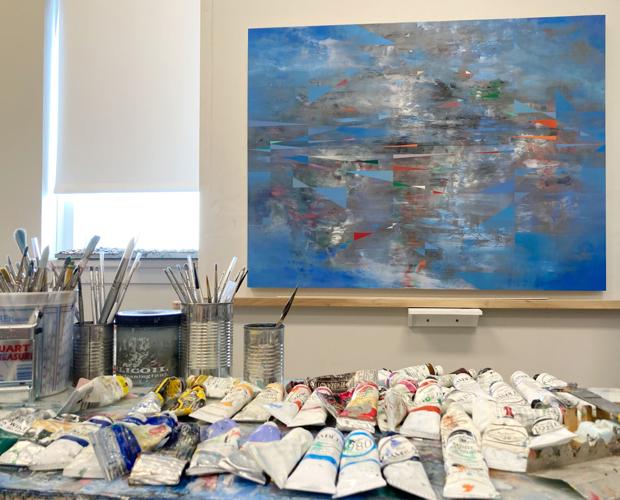 Aaron Holz's studio in Richards Hall, where he is a University of Nebraska-Lincoln professor of painting and drawing.