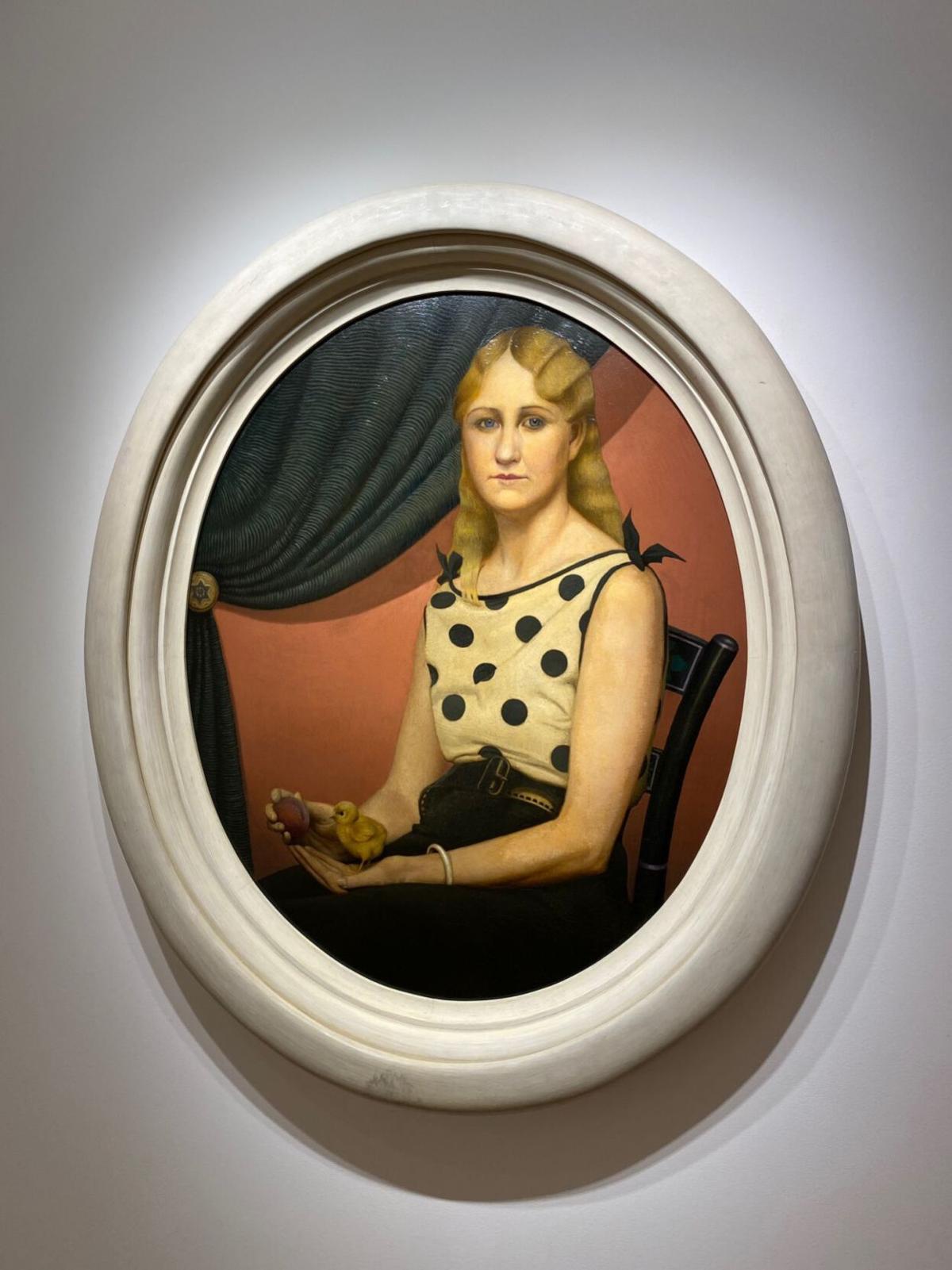 Grant Wood's 1931 masterpeice "Portrait of Nan" is now in Lincoln, brought to the city by Kiechel Fine Art. 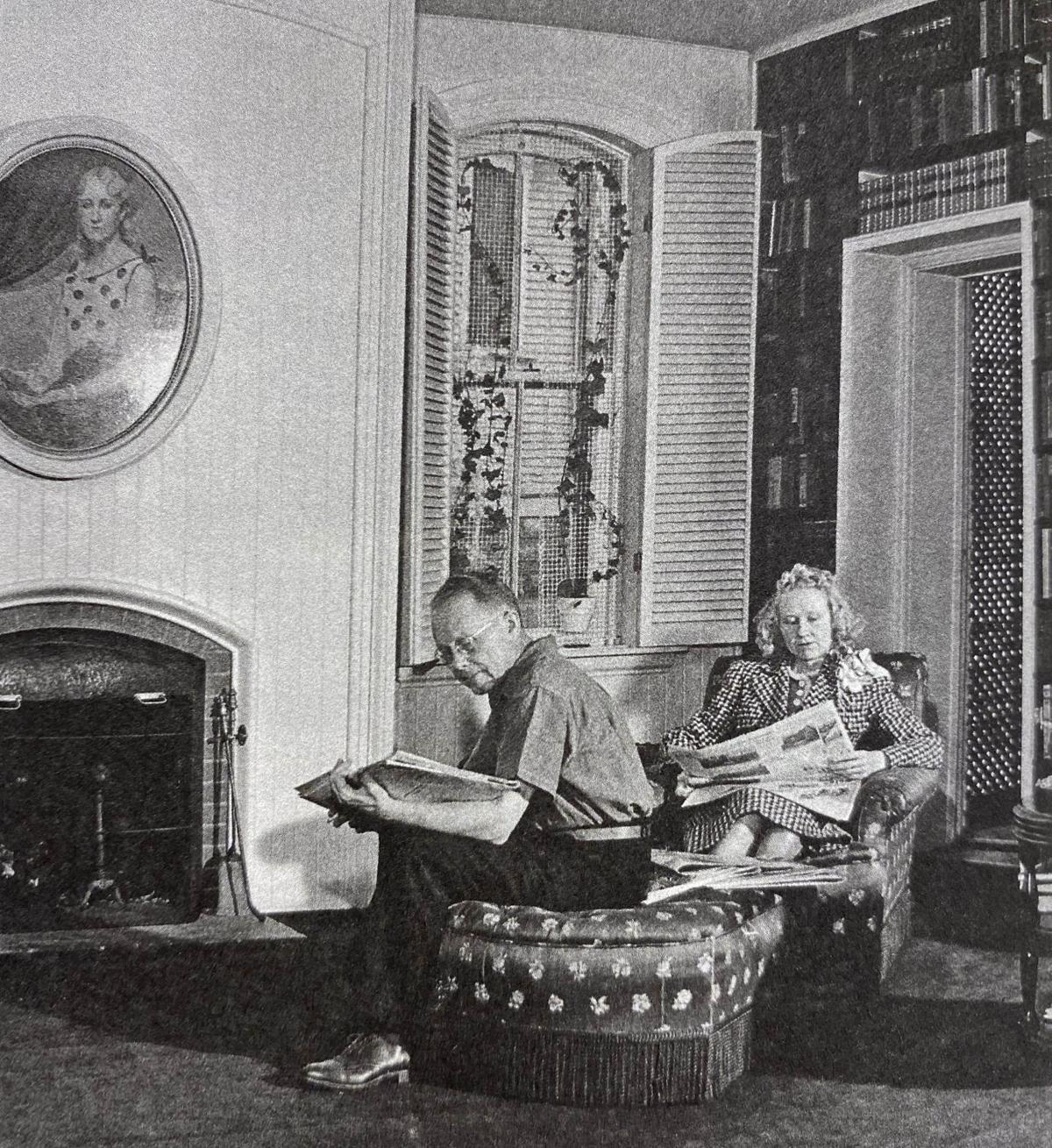 Painter Grant Wood and his sister Nan sit in the living room of his Iowa City, Iowa home with his "Portrait of Nan" handing on the wall.

In August 1930, Grant Wood was touring the town of Eldon, Iowa, when he saw a small, white-framed house, capturing his view of the building in a sketch.

“I saw a trim white cottage, with a trim white porch — a cottage built on severe Gothic lines,” Wood said in a story that appeared on the website for Christie's auction house. “This gave me an idea. That idea was to find two people who, by their severely strait-laced characters, would fit into such a home."

He looked among the folks of Cedar Rapids, Iowa, his hometown, but could find no one among the farmers — for the cottage was to be a farmer’s home.

“I finally induced my own maiden sister to pose and had her comb her hair straight down her ears, with a severely plain part in the middle." Wood said. "... I sent to a Chicago mail-order house for the prim, colonial-print apron my sister wears.”

The painting that had Nan Wood posed next to the overall-clad, bespectacled family dentist holding a pitchfork is, of course, “American Gothic,” to this day, the most famous, widely recognized American painting.

An instant sensation after it won a juried competition at the Art Institute of Chicago, “American Gothic” became the defining masterwork of American Regionalism and was widely reproduced and discussed around the country — with much talk about the harsh, stern depiction of Nan.

To make up for that criticism and his less-than-flattering presentation of his sister, Wood spent four months in 1931 painting a “Portrait of Nan.”

That oval picture finds her in an up-to-date marcelled hairstyle, wearing a contemporary polka-dotted blouse that Wood designed expressly for the portrait, looking enigmatically at the viewer with a half-smile on her face — earning it and Nan the designation “America’s Mona Lisa.”

If you were at Kiechel Fine Art last week for First Friday, you saw “Portrait of Nan.”

“It blows you away,” said Aaron Holz, a University of Nebraska-Lincoln professor of art in painting and drawing. “It’s so much larger than you’d think. Then you think about its significance in everything that Grant Wood created — it’s probably the third most significant work that he made. It's amazing it’s here.”

From a painter’s perspective, Holz said, “Portrait of Nan” is an impressive, multifaceted masterpiece.

“Number one, I’d say if this was an apology to ‘American Gothic,' the hair is one of the greatest things about it, that perfect 1920s pressed hairstyle,” he said. “It’s interesting that the eyes are two different colors, and those colors are repeated in the painting. As a painter, you pick up on those kinds of things."

"To me, the ties on her shoulders, the one on the right looks like a bat. I see all the circles in the pieces, and I think of (Spanish painter Diego) Velasquez’s ‘An Old Woman Cooking Eggs'. With the delicacy of her hands, you can see Wood’s appreciation of Flemish painters. Things just keep coming out at you.”

The “bat” on the shoulder — perhaps the artist's quip at his sister being an “old bat” — is just one of the elements in the picture that make it more than a straightforward portrait of Nan and something of a reflection of the artist himself.

The chick and plum she holds in her hands were most often seen as either folk motifs or symbols of fertility. But biographer R. Tripp Evans writes that they also function as symbols of Wood’s homosexuality.

Similarly, the brass fixture that holds the curtain in the painting’s background contains a Star of David, a reference to the time Wood spent in Munich, Germany, in 1928, where he witnessed Nazi anti-Semitism and assaults on gay people.

Those interpretations weren’t going to happen in the ’30s and ’40s, for Wood was a deeply closeted gay man. And they were never encouraged by Nan, who died in 1990.

“His sister was a very domineering woman who spent her life trying to deny Grant’s sexuality,” Buck Kiechel said.

While it was painted as a gift, Wood never gave the portrait to Nan, instead opting to keep it for himself. That, Evans suggests, was Wood’s intention from the start, indicated in Nan’s eyes that appear to follow the viewer or, more accurately, the painter who made the picture for himself.

“During his lifetime, Grant Wood sold all his mature pieces, except for this one,” Kiechel said. “When he moved to Iowa City, from Cedar Rapids, he even built his entire living room around this painting.”

After Wood’s 1942 death, Nan gained possession of his remaining artwork, including “Portrait of Nan,” which she apparently didn’t find flattering enough.

“She had one of Grant’s people give her a facelift,” Kiechel said. “She added lipstick, gave herself a nose job and smoothed out skin on her neck and her upper arms."

Prior to the 2018 Whitney Museum of American Art exhibition, Kiechel said the painting was conserved by Simon Parkes, who removed the overpainting and Nan’s facelift to bring it back to its original form.

“Portrait of Nan” was one of the first paintings visitors saw in “Grant Wood: American Gothic and Other Fables” in the galleries of the New York museum three years ago.

The exhibition included Wood’s early Arts and Crafts decorative objects, and early impressionist oils through his mature paintings, including the Sheldon Museum of Art’s 1930 portrait “Arnold Comes of Age,” which like the vast majority of Wood’s post-1929 work has been in a museum collection for decades.

“They are primarily absorbed into major institutions,” Kiechel said of Wood’s paintings. “There are a couple in private family collections. This is the first mature Grant Wood to come on the market since 2006.”

Kiechel obtained what he called the “Grant Wood white buffalo” in late January.

One of the country’s leading dealers in Regionalism — handling work by Thomas Hart Benton, John Steuart Curry as well as Wood — Kiechel was sent an offer to purchase the painting. He then contacted a pair of brothers and longtime clients with whom he’d put together previous financial deals to buy art.

“I told them, ‘We need to buy this painting. There isn’t going to be anything else.'” said Kiechel, who drove to New York City to inspect the painting and had the funds wired to cement the deal.

He drove the painting back to Lincoln, stopping in Ohio for a night, rather than shipping by air freight, which he considered risky.

“If I have something that’s this special, I only trust it in my hands,” Kiechel said.

“We’re living at a time when a painting by a white guy from Iowa is not in the forefront of museum collecting,” Kiechel said.

So Kiechel is taking the unusual step of publicly opening up the sale of “Portrait of Nan” rather than privately shopping the painting to museums and known collectors of Wood’s work.

“I want to offer this painting to the world,” he said.

Kiechel said at a time when nonfungible tokens, a new digital sales platform, have become the latest trend in the art world, the ability to offer "something tangible, something real," is even more meaningful.

That number might appear to be astronomical. But an eight-figure sale of “Portrait of Nan” should be expected based on the last auction price for a mature Wood painting.

In 2005, “Spring Plowing,” a 1932 landscape of Wood’s signature rolling hills with a small town in the distance, sold at Sotheby’s, for $6.96 million. The painting measures 18.25 by 22 inches, making it one of the smaller mature Wood works. “Portrait of Nan” is 40 by 30 inches, increasing its value.

For the time being, “Portrait of Nan” will remain in Lincoln. Private viewings can be arranged through the gallery.

But, as much as he would like to keep it, Kiechel said, “Portrait of Nan” will only be here until he can find a buyer and deliver the work to its new home.

“There are a few paintings that have stuck with me from museums,” Kiechel said. "There would be only one other that I've personally handled. This painting has a strong energy coming from it. I know that makes me sound crazy. But it’s there.

“In a perfect world, I’d have this painting forever. But I’m an art dealer, fighting through the pandemic.”

“If you see a piece of art that speaks to you, take it," an organizer said. "If you want to donate art, make it.”

Back in 2019, Lana Del Rey spent a night at the Graduate Hotel, stopping in Lincoln between tour dates. "Didn’t even get to play but had so much fun and you showed us so much love, every single day was so interesting and special.”

Speedway Motors' Museum of American Speed is one of the top museums dedicated to cars and racing in the country, drawing visitors from around the world, but relatively few people from Nebraska. It is looking to change that.

Grant Wood's 1931 masterpeice "Portrait of Nan" is now in Lincoln, brought to the city by Kiechel Fine Art.

Painter Grant Wood and his sister Nan sit in the living room of his Iowa City, Iowa home with his "Portrait of Nan" handing on the wall.