L. Kent Wolgamott: Jean Ray Laury: Retrospective of influential quiltmaker who had it together
View Comments
Share this
× 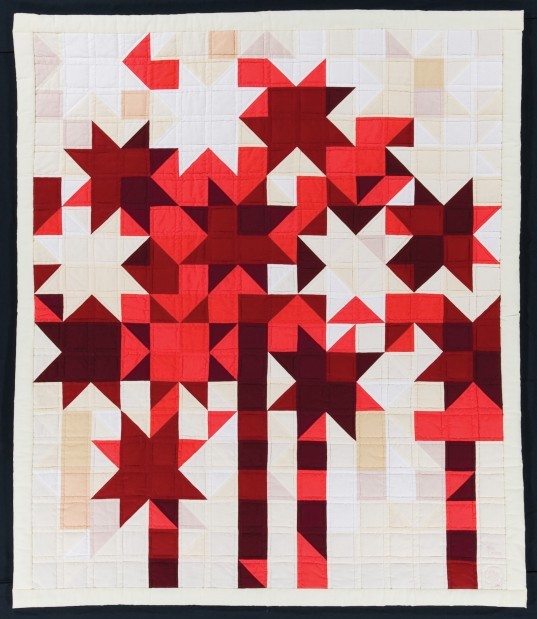 "Starfire" by Jean Ray Laury is part of the exhibtion "Jean Ray Laury: Getting It All Together," which is at the International Quilt Study Center & Museum through Sept. 2. (Courtesy photo) 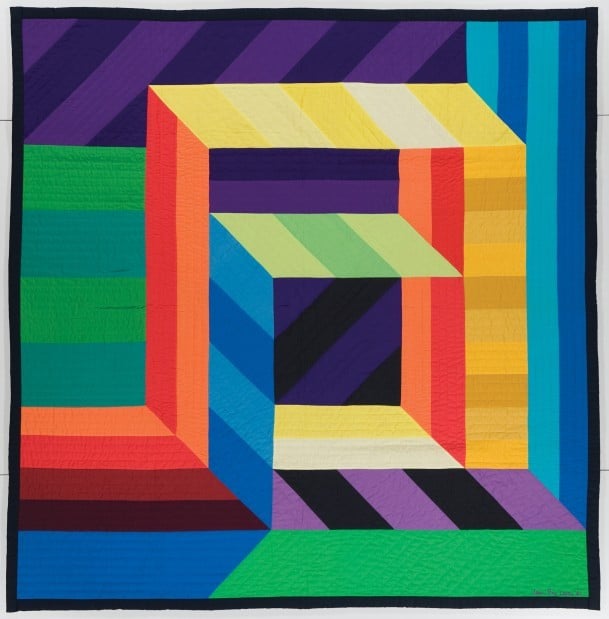 "Boxed Illusion" by Jean Ray Laury is part of the exhibition "Jean Ray Laury: Getting It All Together." (Courtesy photo)

Jean Ray Laury was a pivotal figure in contemporary quiltmaking, inspiring the studio quilt movement with innovative work that began in the 1960s and continued for five decades.

But she also was a wife and mother, a feminist, an artist and designer who worked in mediums in addition to quilts and a teacher and an author.

Hence, the title of the International Quilt Study Center & Museum's retrospective of her work: "Jean Ray Laury: Getting It All Together."

"All of those things were vital to her and kind of equal to her," said IQSC curator of collections Carolyn Ducey, who traveled to Laury's California studio and met with the artist when she donated her collection to the museum in 2010.

That donation included more than 40 quilts, numerous other artworks, sketchbooks and personal archival material. "Getting It All Together" was created from that donation by guest curator Nancy Bavor, a recent graduate of the quilt studies program in the University of Nebraska-Lincoln Department of Textiles.

The show is divided into six sections -- artist and designer, quiltmaker, etc. -- and incorporates not only the focal-point quilts but a sketchbook, a journal, magazines with her articles and other small artworks.

Looking at the exhibition, three things immediately pop to mind.

First, Laury was a fine technical quilter, expanding on standard techniques through her use of screenprinting, utilizing color and composition to enliven simple forms and putting her own stamps on traditional log cabin, red/green and eight-pointed star quilts.

Second, confirming the show's themes, Laury incorporated all those elements into her work. For example, a hand-appliqued "Child's Quilt" in 1958 and the screenprinted "No Dragons on My Quilt" 31 years later each incorporates images of everyday child life -- toys, ice cream cones, etc. -- reflecting her life as a wife and mother.

Third, Laury had a wicked sense of humor that pervades her work. In "These Is Not Art #1" from 1984, Laury incorporates text she found in a museum guestbook -- "These is not art to me all these squares and things -- real art has -- you know -- like a Madonna in it." So, she incorporates a screenprinted Madonna with a bunch of squares.

The show's most compelling section is Feminism.

"It's not a show about feminism, but it is significant she was concerned about things the radical feminists of the late 1960s and 1970s were concerned about," said Jonathan Gregory, the IQSC assistant curator of exhibitions. "She had a more moderate message that appealed to all women, those who couldn't have a radical change or didn't want a radical change."

Some of that general appeal likely comes from Laury's use of humor in her feminist pieces.

"Endangered Species" takes the old quilt character of Sunbonnet Sue, who was the nemesis of quilting originality and gives her wings, putting lots of flying Sues in traditional squares -- as in flying away forever.

"Female Trouble" screenprints women's faces from 1927 tonic advertisements, then uses old phrases such as "Down in Bed" and "Bad Bilious Spells" to illustrate the patronizing view of women in the early 20th century.

The gem, however, is "Barefoot and Pregnant or Senator van Dalsem," a 1987 piece that was selected as one of the top 100 quilts of the 20th century. Done in traditional blocks, the screenprinted quilt is in comic strip form, illustrating the words of an Arkansas state senator's 1983 sexist speech that said, essentially, women were controlled by keeping them barefoot and pregnant.

The moving "Nineteen" appears to be a child's quilt. But a careful examination finds the 20th block in the lower right-hand corner to be a depiction of the Murrah Federal Building in Oklahoma City, and stitched into the quilt are the names of the 19 children killed in the 1995 blast.

Laury passed away on March 2, 2011. The retrospective opened one year to the date after her death and is a fine remembrance of an artist  Ducey appropriately called "a shining light of the quilt world."

"Jean Ray Laury: Getting It All Together" is one of three exhibitions now on view at the IQSC&M.

Next week, I'll take a look at a related show: "A Tribute to Ardis James," an exhibition of work by 17 contemporary studio quiltmakers, many of whom knew and worked with Laury. Those quilts were donated to the IQSC&M in honor of James, who, along with her husband, Robert, donated the first 1,000 quilts that are the foundation of the museum's collection.

What: "Jean Ray Laury: Getting It All Together"

"Starfire" by Jean Ray Laury is part of the exhibtion "Jean Ray Laury: Getting It All Together," which is at the International Quilt Study Center & Museum through Sept. 2. (Courtesy photo)

"Boxed Illusion" by Jean Ray Laury is part of the exhibition "Jean Ray Laury: Getting It All Together." (Courtesy photo)