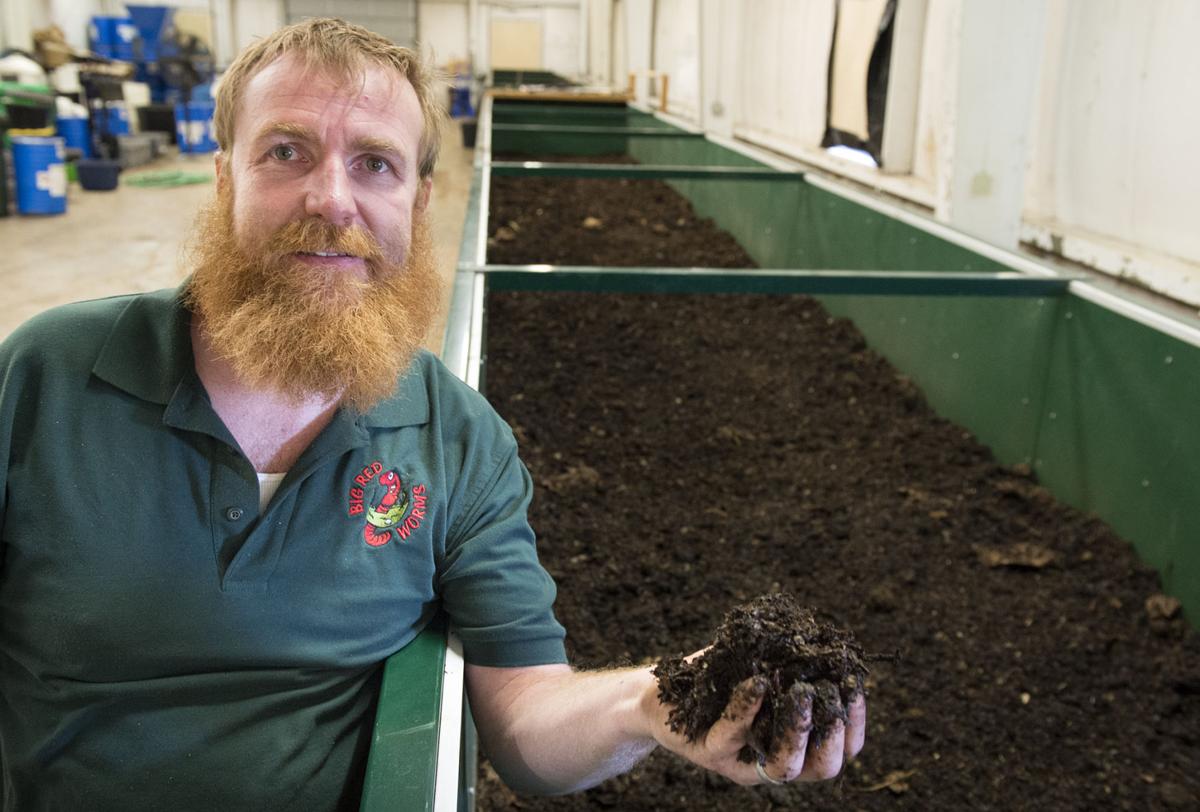 Jeremiah Picard holds a handful of compost being broken down by red wiggler worms at his compost and vermiculture business in Lincoln. 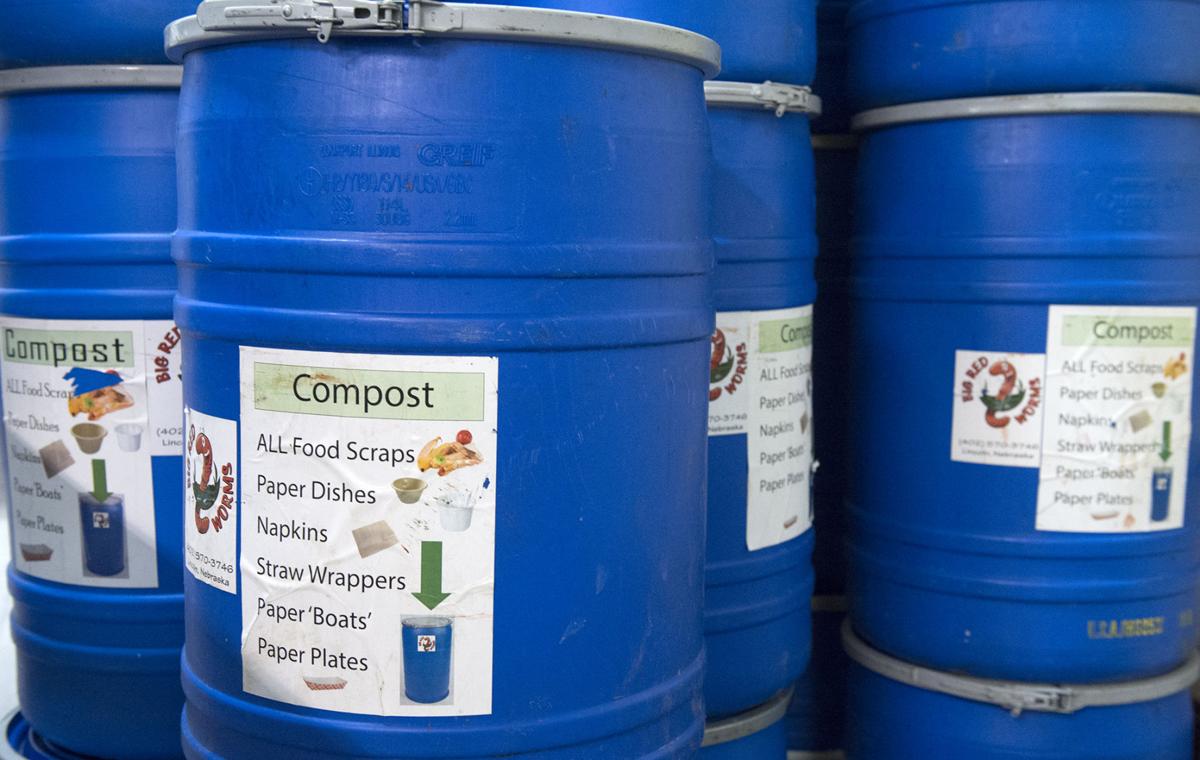 Barrels with instructional labels are used to collect compostable waste from two schools and various businesses in Lincoln. 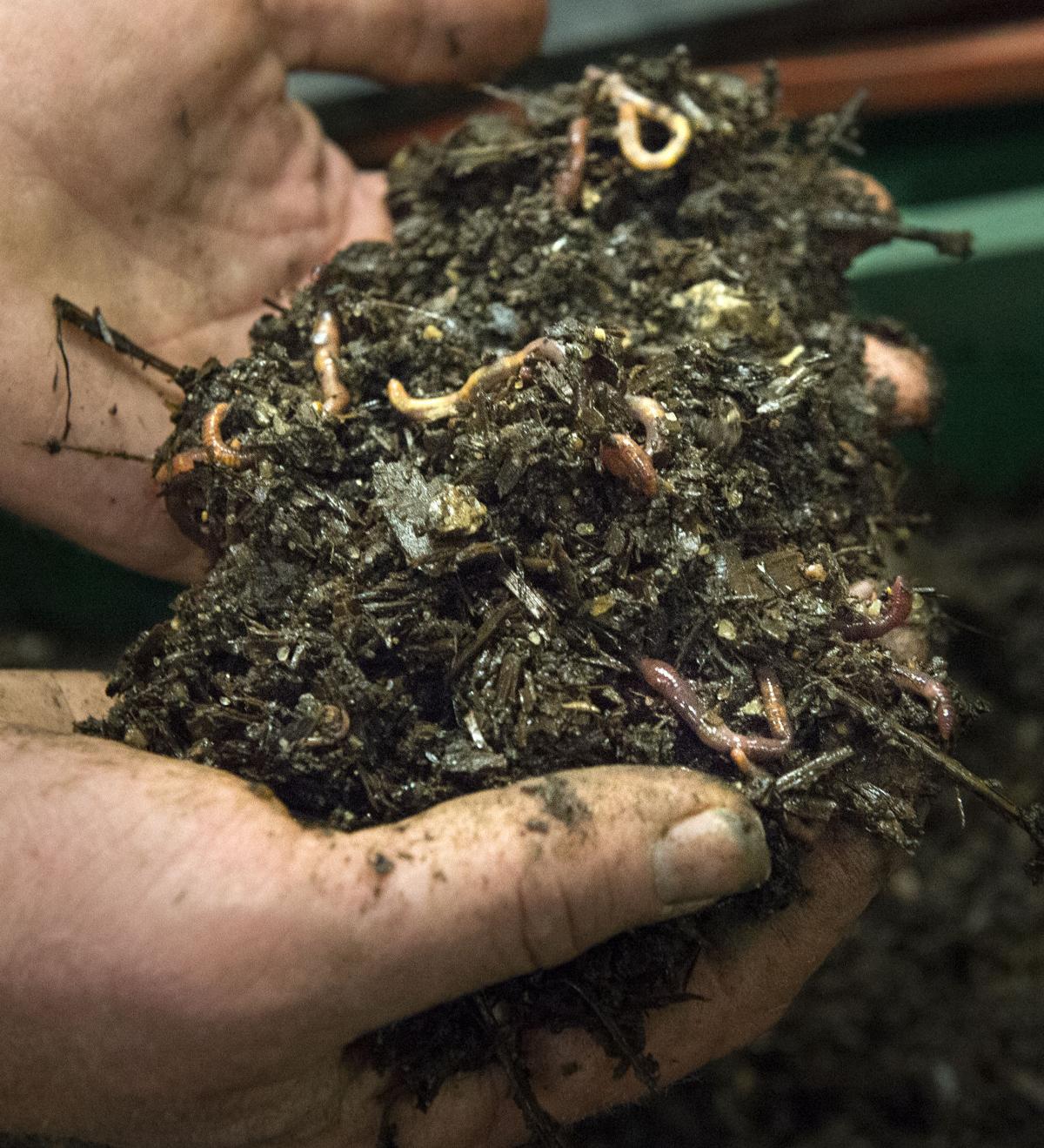 Jeremiah Picard’s hands are black from dipping his hands repeatedly into the earth.

The 40-year-old Lincoln man isn’t a farmer, however. He’s a worm producer.

And a new commercial worm farm he’s opened in the LNK Enterprise Park is giving him a chance to continue raising worms, something he’s been doing in his basement for years.

Big Red Worms, 3211 N.W. 39th St., takes discarded food waste and turns it into a useful compost product with the help of worms. The process is called vermiculture.

The goals are to help reduce the amount of waste that goes to the city landfill, create a natural soil-enhancing product that can be used in community and school gardens, and give students a chance to learn about the benefits of composting.

Since opening, the company has diverted 75,000 pounds of food waste from the city landfill, Picard said.

Inside a large metal shed, he grows worms in two large bins. He brings food scraps to the site and mixes them with soil before heaping them in piles outside. He then pumps heated air into the piles to increase oxygen and microbial activity and speed up the composting process.

He uses red wigglers, which are considered the best worms for vermiculture operations because they live well in close, highly populated conditions and don't burrow.

The vermiculture process creates worm castings, a prized natural fertilizer that helps plants use nutrients already present in the soil. Worm castings are the undigested material, soil and bacteria excreted by a worm after it eats the food scraps.

Big Red Worms partners with Lincoln Public Schools to collect food scraps and to help educate students about the importance of composting.

Brittney Albin, sustainability coordinator at LPS, said the vermiculture project is a great learning opportunity for students and has complemented the district's existing recycling program.

“Now they can see turning that cafeteria waste into a useful product,” she said.

She said the partnership has diverted 11 tons of waste from the two schools’ cafeterias and led to the schools diverting 86 percent of their waste from the city landfill.

Picard said he’s also begun collecting food waste from a new bar in the Haymarket, HopCat, and already has collected 850 pounds of waste from the business.

He said one challenge he’s faced is separating non-biodegradable wastes, such as straws, lids and cups, from the food waste he collects from the two Lincoln schools.

However, he said, his worms are able to eat even paper products.

“Anything that was ever alive, they’ll eat,” he said.

He estimates he now has about 1 million worms in the two large bins inside his facility.

The company plans to sell its worm castings to local farmers when it gets a screening machine that will allow it to remove contaminants and worms from the compost.

The company has received several grants that have helped it purchase its buildings and equipment.

However, he said, the company already needs to expand in order to be able to process more compost.

The Nebraska Farmers Union has come up with a new twist -- let's call it a wiggle -- to recycle school cafeteria food scraps.

First, corrugated cardboard will be banned from the Lincoln landfill, probably beginning April 1, 2017.

Jeremiah Picard holds a handful of compost being broken down by red wiggler worms at his compost and vermiculture business in Lincoln.

Barrels with instructional labels are used to collect compostable waste from two schools and various businesses in Lincoln.