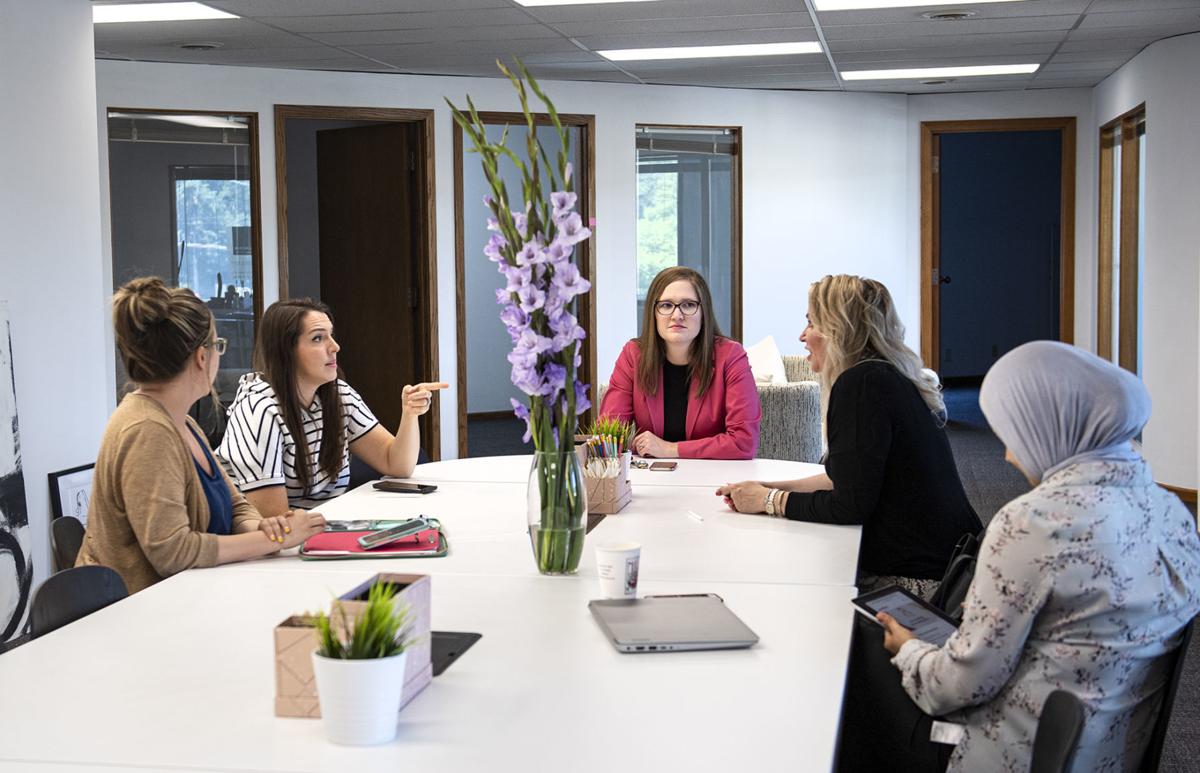 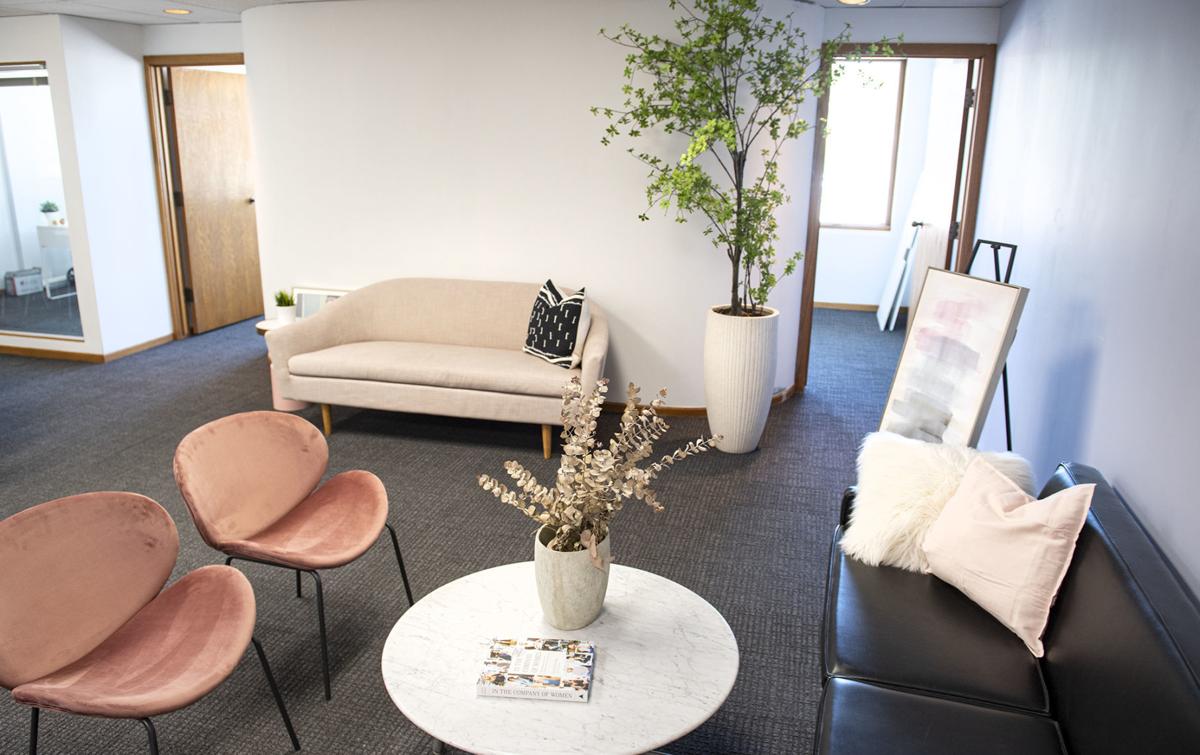 Arrive is a co-working space for women cofounded by Jenna Vitosh and Eva Prettyman. 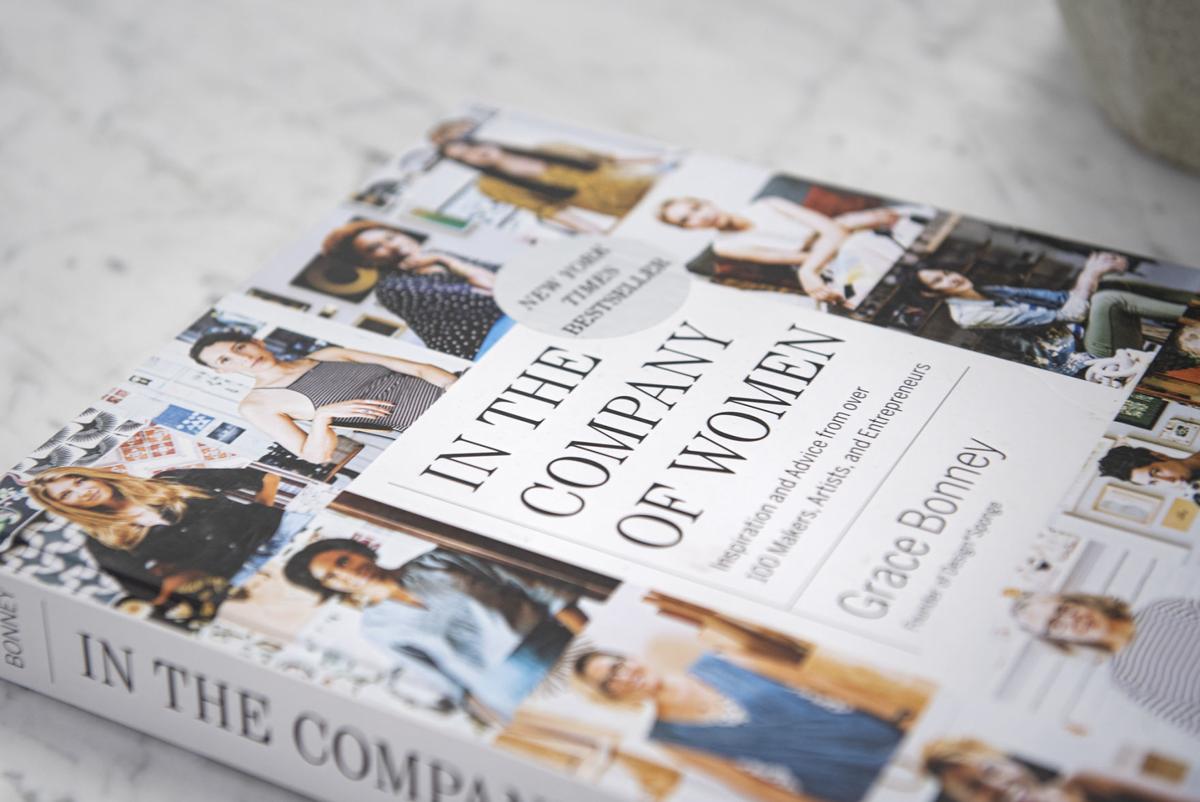 Arrive is stocked with items to help make the co-working space comfortable and inspirational. 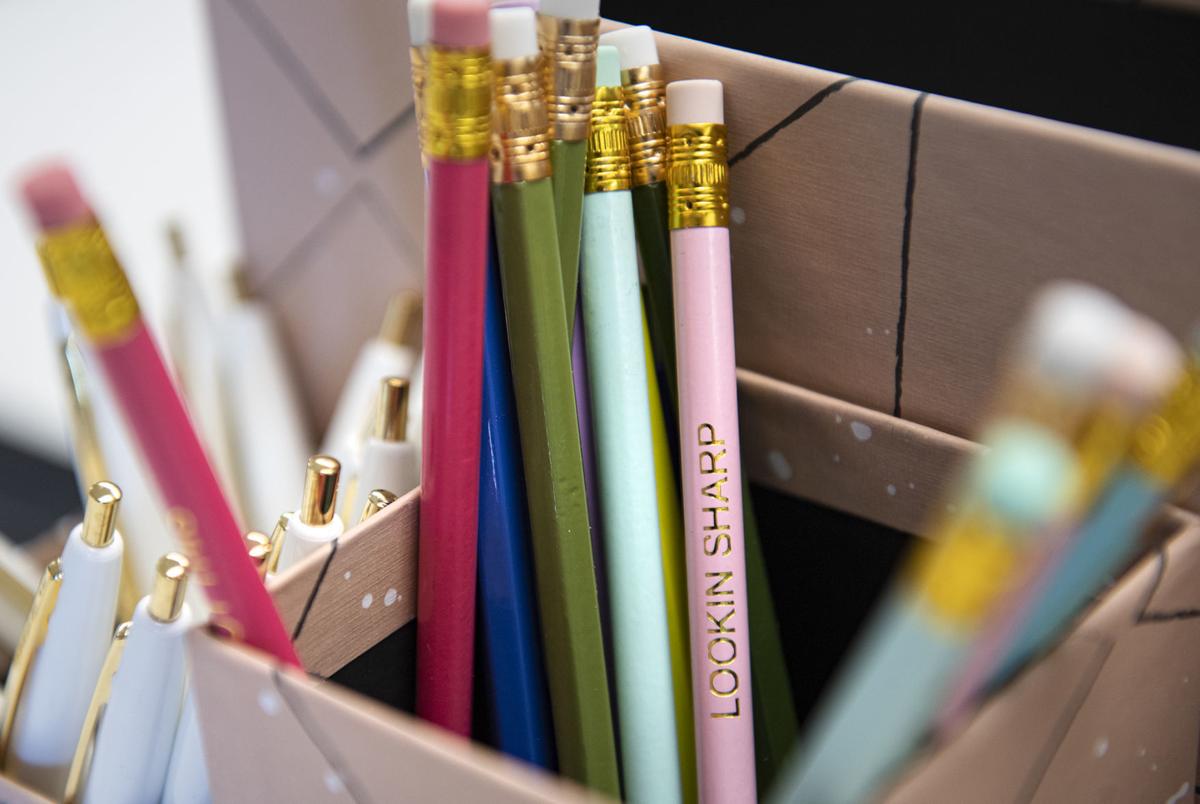 Pencils inscribed with fun sayings await use at Arrive. 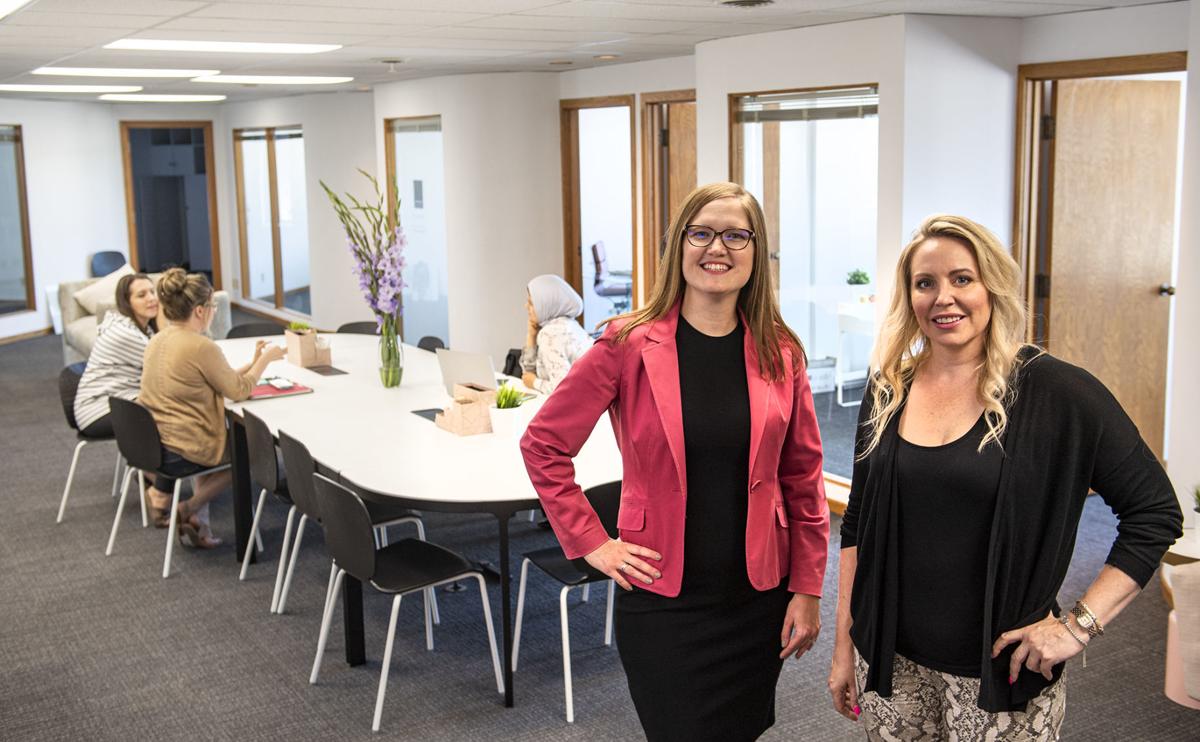 Cofounders of Arrive, from left, Jenna Vitosh and Eva Prettyman, show off their co-working space for women Tuesday. 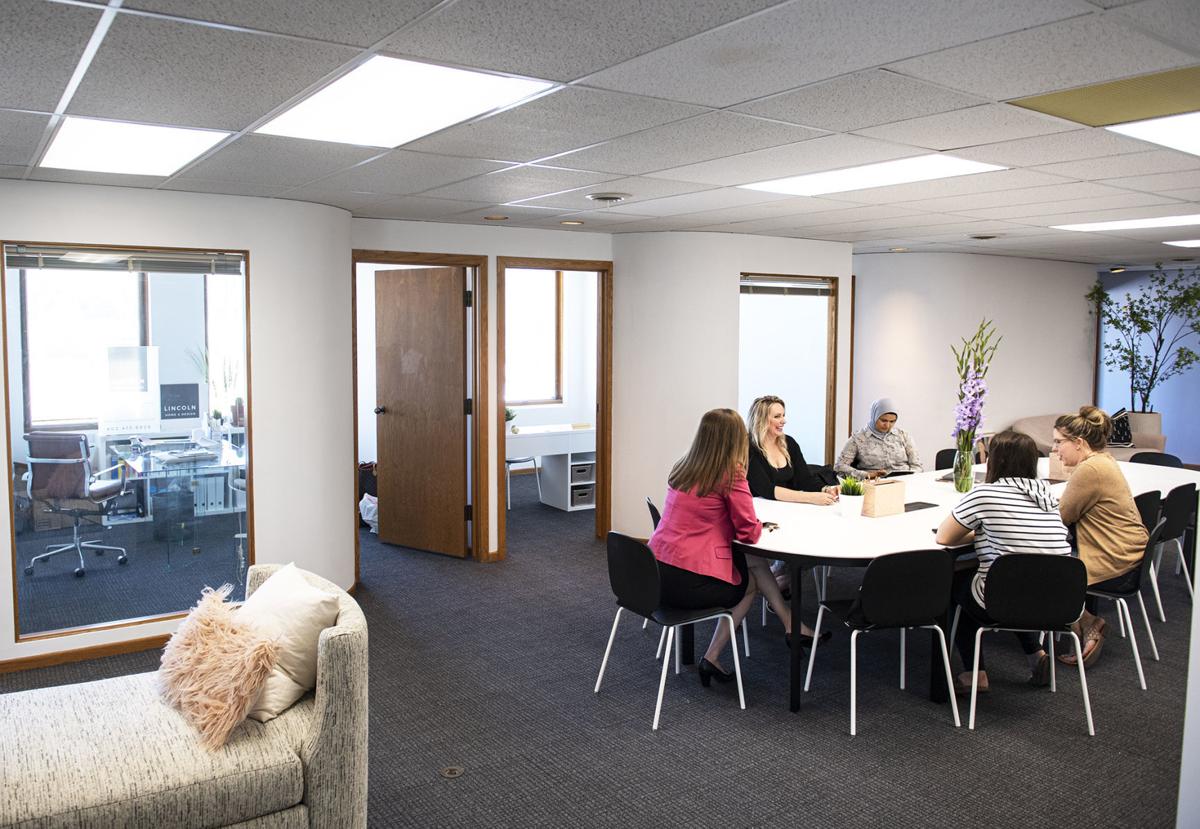 Returning to Lincoln after living abroad for several years, Eva Prettyman started up an interior design business and based herself out of Turbine Flats, a coworking space and startup accelerator at 21st and Y streets.

Though she said she liked the space and felt comfortable, she found that events there and at other coworking spaces such as Fuse Coworking were geared more toward men.

When she would attend events, she said, "I would go in and it would be me and two other women and that was it," with the rest of the attendees all being men.

Prettyman, who also is a real estate agent, met Jenna Vitosh through a women's networking group she was part of.

That group and another that Prettyman founded for female entrepreneurs showed them the support and connections that women could get by working together, and that led Vitosh to come up with the idea of creating a physical space where women could collaborate.

The two women did extensive research and realized there was a demand for such a space.

Vitosh, who is a financial adviser, said she did one-on-one interviews with a number of local women business owners who are currently working from home, and when she asked if they were looking for the kind of space she and Prettyman were proposing, the overwhelming answer was "yes."

"They're looking for a place to belong," she said. "A place to feel like they can go be encouraged and have other people around them."

Prettyman and Vitosh hope their new coworking space, Arrive, will be the place that fills that need.

The space is located on the second floor of a building at 3883 Normal Boulevard and is set to open Aug. 1.

The location is borne out of choice but also necessity.

Prettyman said they looked at a number of buildings downtown that offered some pretty cool opportunities, but they also were expensive and didn't have great parking.

"The women that we talked to -- they wanted something more centrally located and they did not want to have to go downtown and park, so that really drove our location decision," Prettyman said.

Cost was a big issue, she said, which is another reason they chose the location they did, which is upstairs from where Vitosh has her office.

"If our mission is to empower women, we can't do that if our rent is the highest out there," Vitosh said.

The space has many of the same offerings as other coworking spaces, including dedicated offices, desk spaces and a conference room. It also has a content studio and a "phone booth," which is a small space where people can make calls in private without noise or distractions.

But in its nod to being a female-friendly space, Arrive has a mother's lounge, and it also has other softer touches, such as flowers and plants scattered about.

Prettyman and her business, Lincoln Home & Design, is the first tenant to make Arrive home. Other women already have inquired about the space, including a graphic designer and a consultant.

Options range from $20 to drop in for a day during normal weekday hours to dedicated use of private or shared office spaces starting at $250 a month.

Prettyman said that when she first moved back to Lincoln, she thought about working from home but felt that to look like a legitimate business and to be taken seriously, she needed to have a business address and a place to meet with clients.

She and Vitosh are hoping Arrive can provide that sense of legitimacy to other women who are working from home or from coffee shops.

"Taking that step to rent an office or actually go to a space that's not your house," -- it can help women take themselves more seriously and also be taken more seriously by others, Prettyman said.

Women-focused coworking spaces are fairly new, but the concept has been growing rapidly, and they have been popping up all over during the past few years in major cities. A space called Trouvaille opened in Omaha last year.

One of largest female-focused coworking spaces, called the Wing, has received $40 million in venture capital and now has locations in four cities with plans for more.

Prettyman and Vitosh are funding Arrive out of their own pockets -- "You're looking at our investors," Vitosh joked during an interview -- but making money is not their main aim.

Their goal is to create a community while also helping women business owners and entrepreneurs find the support and resources they need to be successful.

Vitosh said that having a space where people, be it women or men, can work alongside each other and collaborate and support each other is vital for business owners.

"It can help encourage people and empower them and also reduce the isolation that I think a lot of entrepreneurs in general feel when they're starting a business," she said.

Large data center development proposed along I-80 in Lincoln

Lincoln has long missed out on the regional data center boom that has brought major tech companies such as Facebook, Google, Apple and Microso…

PAPILLION — As of Thursday, it's possible that post you liked or that photo you uploaded to your Facebook page was routed through Nebraska.

A lifetime of entrepreneurship: Unafraid to fail, Mailani Veney finds success in Lincoln and beyond

Mailani Veney's first experience as an entrepreneur came when she was a grade-school student in Hawaii.

Lizz Whitacre was so allergic to animals as a kid, her parents wouldn't let her have a pet until she was a teenager.

The number of local names on the Inc. 5000 list of the country's fastest-growing companies grew this year.

A Nebraska-based networking group for the financial technology industry is planning to hold its first-ever conference.

Arrive is a co-working space for women cofounded by Jenna Vitosh and Eva Prettyman.

Arrive is stocked with items to help make the co-working space comfortable and inspirational.

Pencils inscribed with fun sayings await use at Arrive.

Cofounders of Arrive, from left, Jenna Vitosh and Eva Prettyman, show off their co-working space for women Tuesday.