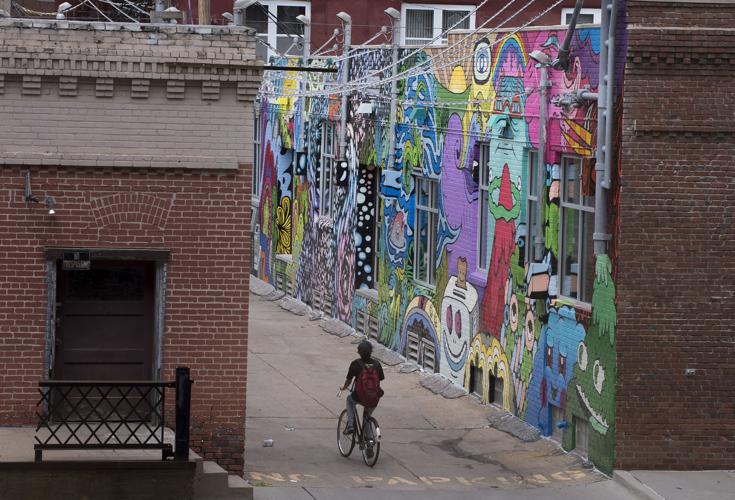 A bicyclist rides in front of the newly painted mural on the west side alley wall of the Archrival building at 720 O St. last week. Portland-based muralists John Stommel and Travis Czekalski, who make up Rather Severe, were commissioned to paint the wall and another mural inside the building. 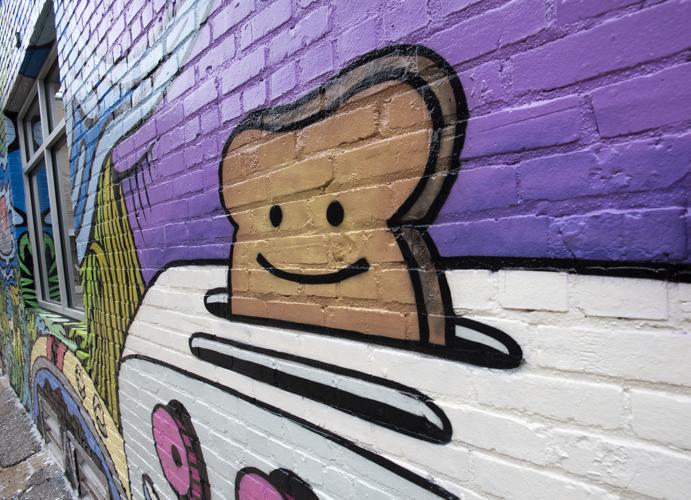 This smiling piece of toast is part of the mural on the west alley wall of the Archrival building in the Haymarket.

The bug-eyed tree guy was among the first creatures to appear last month on the west side alley wall of the recently renovated Archrival offices at 720 O St., first in gray-outlined underpainting and then in the colors of the freshest pine-scented car air freshener. Then along came the rosy-cheeked cumulus cloud and Muppet-y looking volcano, just a few more characters in a cast that now graces the 135-foot-long, 20-foot-tall office wall — and the background of scores of Instagram photos.

It took one scissor lift, two weeks, 200 or so cans of Montana acrylic-based spray paint and two guys from Portland to transform the brick wall into a mural featuring five distinct themes — robots, abstract shapes and colors, the cosmos, flora and fauna and, as one of the artists described it, “toaster dude and friends.” It’s a project Archrival CEO Clint Runge said had been on the minds of many staffers for at least three years, or about as long as the Lincoln-based ad agency has had a satellite office in Portland.

There, as in many cities, street art has in the past couple of decades gone from a mostly discouraged form of vandalism to a sought-after city-defining medium. There is a Portland Street Art Alliance, for instance, which is a nonprofit that works as a facilitator between artists and businesses to find homes for new murals and to preserve those that make Portland Portland. (They also offer bike tours.) And thanks in part to the encouragement in the craft, there are many professional street artists based there, including John Stommel and Travis Czekalski, who collaborate on murals under the collective name of Rather Severe.

The two have been commissioned to paint murals not only throughout Portland but all over the place — on a Roanoke, Virginia, pizza place and a Boston Marathon pace car, among them. Though they've been to different corners of the country, they'd never been asked to paint a mural in the middle of it until Runge commissioned them to transform Archrival's alleyway.

“We were pretty surprised,” Czekalski said. "Didn’t really know what to expect from Nebraska. Never been here before. Kind of just this gray zone in my mind of what to expect out here, but I’ve been very surprised how cool it’s been, how much there is going on."

Runge said he wanted to share some of the culture from Portland in Lincoln, and also for team members based in Oregon to see something familiar when they came to Nebraska. The murals — there are also several inside the business — are the finishing touches on a complete workspace overhaul.

The murals inside Archrival include a few internal contributions, as well as a second Rather Severe work featuring many of the employees' pets in cartoon form. As for the giant mural outside, Runge said Archrival followed the lead of the Gallery Alley, the art- and light-filled corridor that revamped the walking space between the neighboring Creamery and Burkholder Project buildings in the Haymarket. Archrival's alley space was already photo-central for "literally everything you can come up with," Runge said — baby pictures, wedding shots, engagements, bachelorette parties. Since the mural went up, Runge said he's seen someone outside taking pictures in front of it nearly every time he's passed through the alley, a phenomenon the artists are familiar with.

"It turns into an actual destination,” Stommel said.

To pay for Rather Severe's work, Archrival got help to cover the commission fee from the Downtown Lincoln Association and WRK LLC, which owns the building that houses Archrival, meaning there was technically a moment when Will Scott was asked for money so someone could spray paint WRK's property. Scott laughed when asked about it and said the request was a welcome change.

“We’ve had to pay to cover up graffiti, and I think there’s a big difference between vandalism and art,” he said.

Scott said Archrival's building is a special one for his company, because it was WRK's first renovation/revitalization project nearly 15 years ago, and he's excited about the prospect of commissioning more murals in the area, and perhaps even collaborating to create a nonprofit like the Portland Street Art Alliance and foster mural projects from Lincoln artists here. That's a down-the-alley goal, he said. For now, he's admiring the creation.

“The outside is something they (Archrival) wanted to do for their community and for visitors of our community to stumble upon and enjoy,” Scott said. "I think it's awesome."

Though the piece features dozens of cartoon-y characters, it does not feature Archrival's logo. Runge said they won't be adding that anywhere, though they might install a plaque somewhere on the wall. It would list the contributors to fund the project, sure, but it'd also have a message. He thought it might say something like this: "Hey, this is for you, Lincoln. Take a photo. Have fun."

When high winds in May damaged the lone pin-oak tree in Marla and Terry Buresh's backyard, which overlooks the 10th hole at Mahoney Golf Cours…

It went up for the first time last summer, a creation by Kevin Anderson, the owner of the Auto Connection, that required a mere 20 characters …

Goldman Sachs Sees Oil Heading to $100 a Barrel by 3Q

Goldman Sachs Sees Oil Heading to $100 a Barrel by 3Q

The US Economy Grew More Than Expected in 2022

The US Economy Grew More Than Expected in 2022

A bicyclist rides in front of the newly painted mural on the west side alley wall of the Archrival building at 720 O St. last week. Portland-based muralists John Stommel and Travis Czekalski, who make up Rather Severe, were commissioned to paint the wall and another mural inside the building.

This smiling piece of toast is part of the mural on the west alley wall of the Archrival building in the Haymarket.