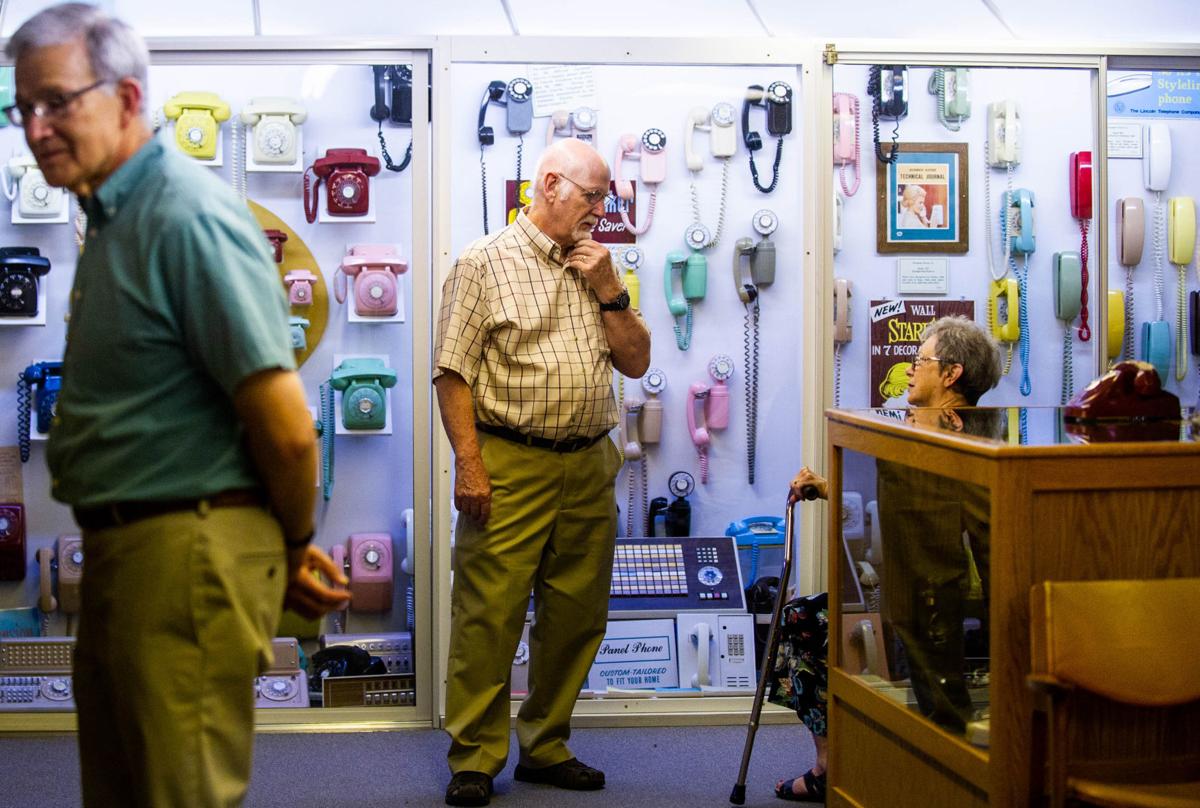 Bob Evnen (from left), Aaron Nordyke and Lynda Nordyke look at a roomful of colorful house phones at the Frank H. Woods Telephone Pioneer Museum on its last day of operation in July. 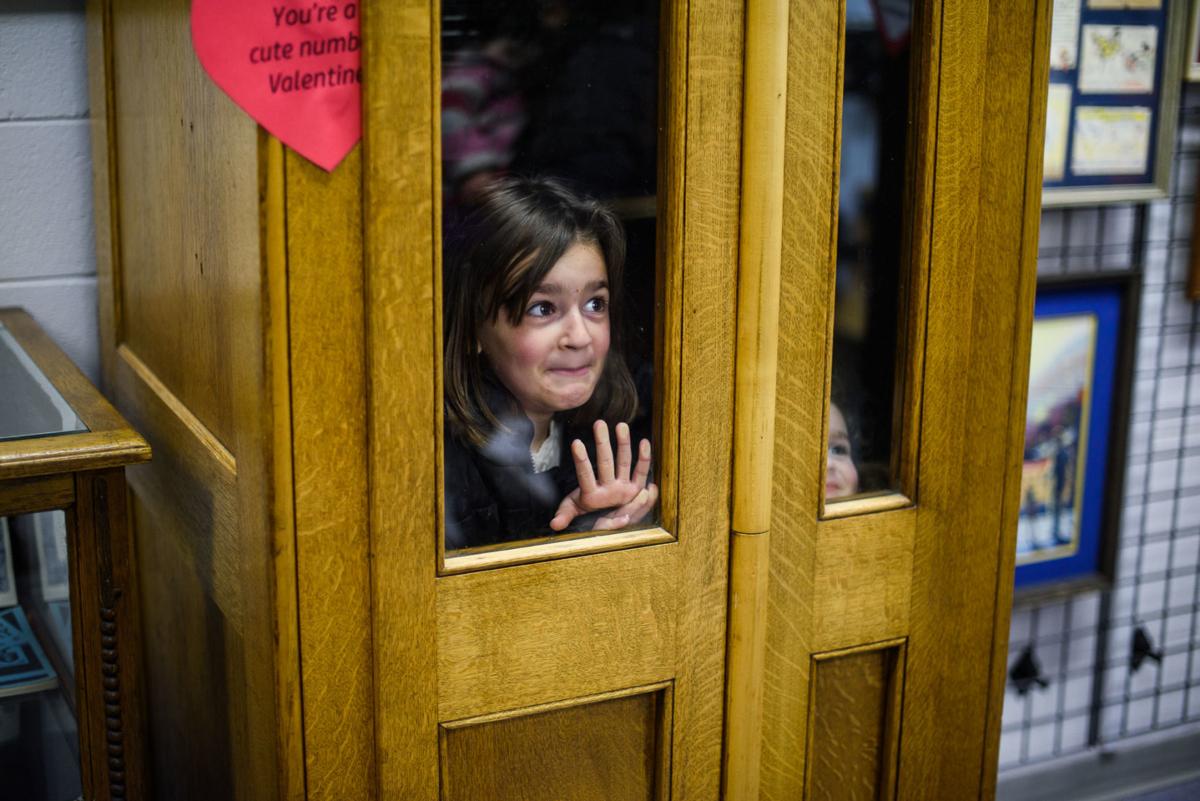 Olivia and Juliana Dougherty look out from an antique telephone booth in 2016 at the Frank H. Woods Telephone Pioneer Museum.

All of the telephone history in the Frank H. Woods Telephone Pioneer Museum — the antique walnut phones, the pastel princesses, the fiddlebacks and candlesticks — has new owners.

Nelnet, Speedway Properties, Thomas C. Woods IV and the Woods Charitable Fund announced Monday they’ve purchased the collection for an undisclosed sum and will display the hundreds of artifacts in the Telegraph District as it is developed.

The announcement answers the lingering question of the artifacts' fate since curators announced last spring that the museum was closing.

The museum ended up staying open until the end of July after spending the past three years looking for another location.

The museum owners knew they'd need a new location when Nelnet and Speedway Properties began developing the Telegraph District — nearly 20 acres near 21st and N streets, where the museum had been located since 1994.

At the time, Mayor Chris Beutler announced a 17-member committee to explore alternative museum locations and in 2016, a group of UNL architecture students drew up plans for a new space. But in the end, the museum owners concluded that a move to a new building was cost-prohibitive.

The developers said they know the museum will be missed, but they wanted to find a way to recognize the historical significance of Lincoln Telephone and Telegraph Co. in Lincoln and maintain the spirit and history of the area.

“We have made it a priority to preserve the museum’s purpose of educating the public on the history of the telephone industry and LT&T,” Clay Smith, Speedway Properties general partner, said in a prepared statement. “We are excited to keep the collection in Lincoln, make objects more accessible to the public and integrate the legacy of Lincoln’s original telephone company in the development of the Telegraph District.”

Pieces of the collection will be displayed at different locations throughout the Telegraph District, and Speedway also will create a permanent telephone display at the Speedway Motors Museum of American Speed at 599 Oakcreek Drive.

The Telegraph District includes offices for more than 1,000 Allo and Nelnet employees, as well as The Mill and Subway. The second phase of the development will add residential units, mostly along N Street at 20th and 21st streets.

Nelnet spokesman Ben Kiser said the displays could be in spaces already renovated, as well as those yet to be developed.

The museum had three offers to buy the collection, including from technology museums in Texas and Maryland, said curator Wally Tubbs.

But keeping the items in Lincoln was important, he said.

“I think the fact that the artifacts will remain in Lincoln was important in the selection of who purchased it,” said Tubbs, a longtime telephone company employee who worked with the collection for 34 years.

The museum was started in 1928 by Frank Woods, who asked employees to find artifacts to create a collection to mark the 25th anniversary of Lincoln Telephone & Telegraph the following year.

It was located on the eighth floor of the telephone building at 14th and M streets until that floor was renovated and the museum moved to 21st and N streets. Volunteers spent two years preparing the building for the public.

A philanthropic organization called the Frank H. Woods Telephone Pioneer Association — a group of former telephone employees who have cared for the collection for years — eventually assumed ownership of it.

“The fact that Speedway has just a magnificent car and raceway museum and they know how to curate artifacts makes it easier to let go,” Tubbs said.

It’s hard, though, because he knows all the artifacts and all the stories.

One of his favorites: The Strowger candlestick telephone, which Woods decided to buy when he opened his telephone company in 1904.

It was the newest technology: a dial phone that allowed callers to reach their intended parties without an operator. It was developed by a mortician who was convinced operators weren’t forwarding mortician calls to him as much as his competitors, Tubbs said.

Woods bought the phones and offered to sign up customers for free until he had as many as his competitor. Other business leaders thought he was foolish, Tubbs said, but it took just 2½ months.

“That’s a great story,” Tubbs said. “Those are the types of things I used to use when I gave tours down there. A background of how this whole thing got started.”

If you call the Frank H. Woods Telephone Pioneer Museum, no one will answer.

The Frank H. Woods Telephone Museum, ringing off for the last time

The Frank H. Woods Telephone Pioneer Museum — housed in an old building in the new Telegraph District — is shutting down.

Omaha restaurant ordered to pay $146,000 in back wages

The owners of an Omaha restaurant have been ordered to pay nearly $146,000 in back wages for violations of the Fair Labor Standards Act.

The Indian Center, once home to dozens of employees and thriving around-the-clock programs, will remain open only for "essential" community ev…

The sign had already been standing on its three long legs for a decade by the time Tom Nebelsick joined Randolph Car Wash, and that was more t…

I am a Trip Advisor fan. It’s not perfect, but it does protect travelers from picking the wrong restaurant or hotel or tourist attraction in u…

Bob Evnen (from left), Aaron Nordyke and Lynda Nordyke look at a roomful of colorful house phones at the Frank H. Woods Telephone Pioneer Museum on its last day of operation in July.

Olivia and Juliana Dougherty look out from an antique telephone booth in 2016 at the Frank H. Woods Telephone Pioneer Museum.