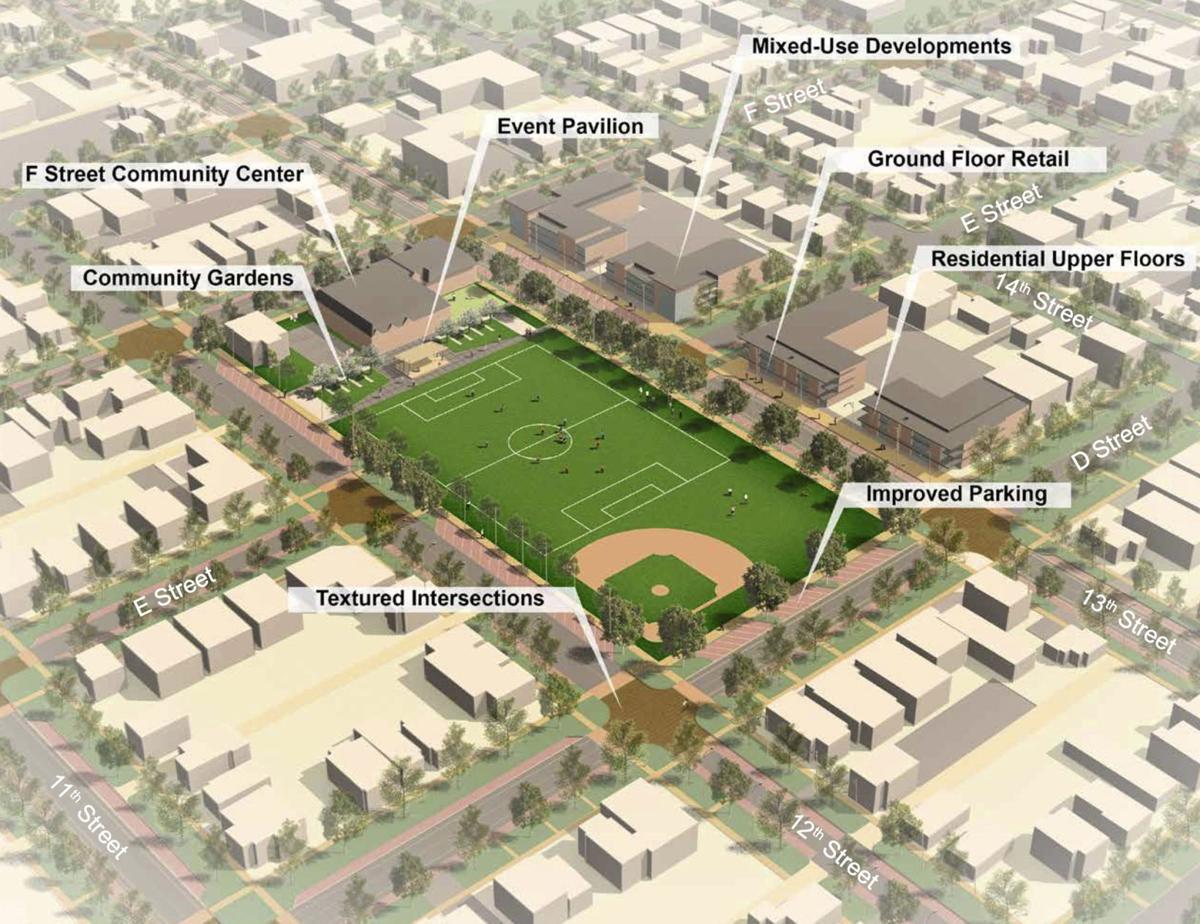 An area south of downtown with what an expansion of the F Street Community Center might entail. 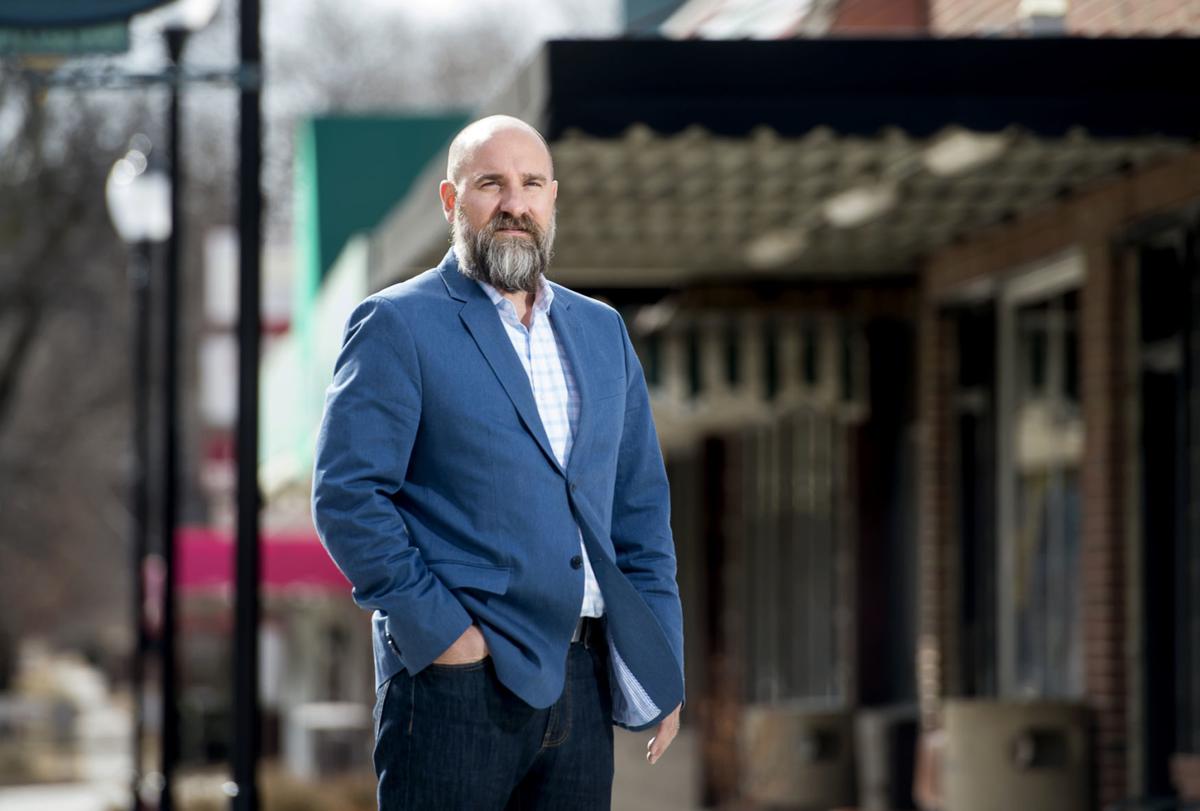 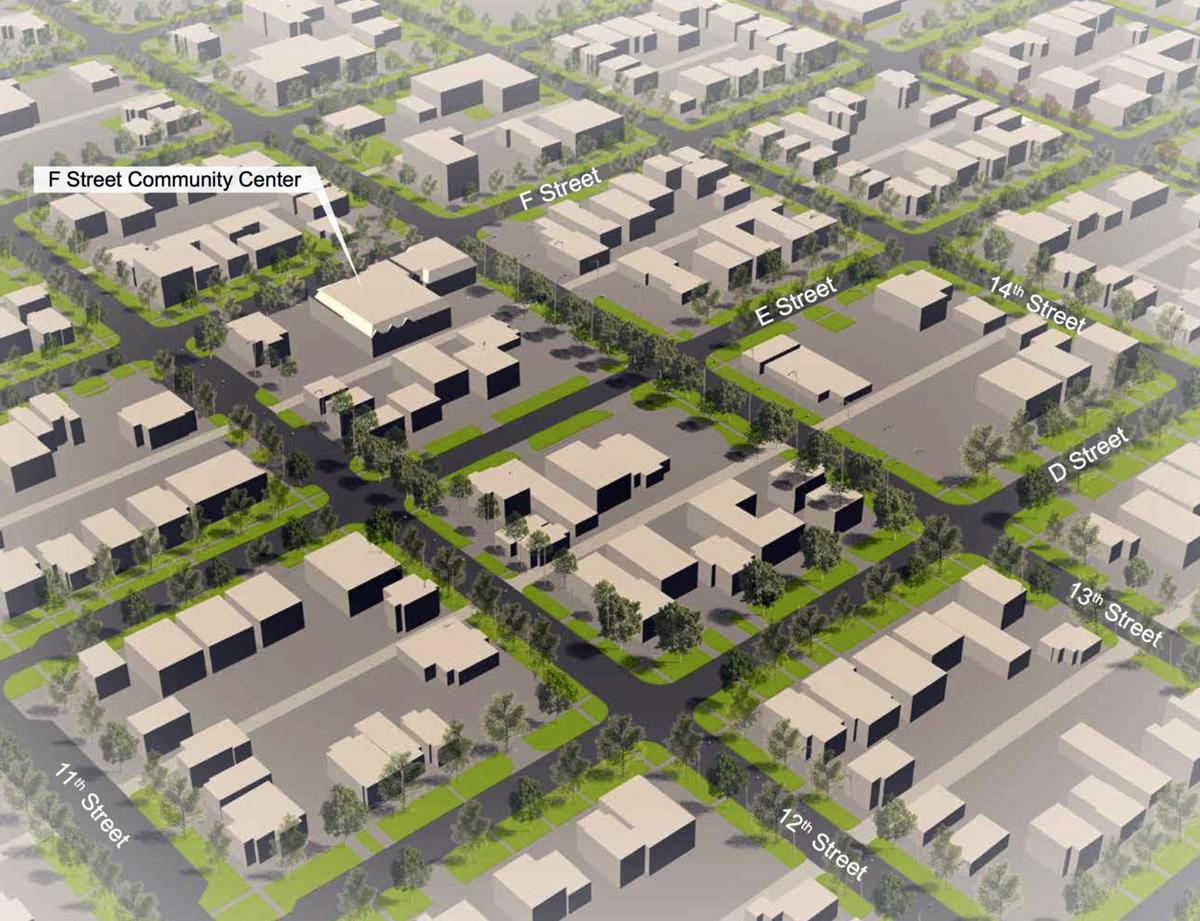 The area south of downtown with the F Street Community Center marked.

The consultant’s vision for the future of the neighborhoods south of downtown suggested a series of big, bold moves.

But the man hired to shape the future of the neighborhoods south of downtown is starting smaller, and simpler.

First, Shawn Ryba will settle into an office in the neighborhood.

Then he’s going to talk to people. And he's going to listen.

The new executive director of the South of Downtown Community Development Organization has years of work ahead him if he’s going to lead the revitalization of one of the city’s oldest districts -- a high-density, high-rental, low-income area between H Street to the north, A to the south, Eighth to the west and 17th to the east.

“We need to get all the stakeholders together,” said Ryba, a longtime inner-city advocate who most recently worked as chief operating officer at NeighborWorks Lincoln. “It’s going to take everyone to play a role if we’re going to do this work right.”

But before looking at Ryba's next steps, and the steps after that, here's a summary of the two years of work that led to his hiring.

In January 2015, the Lincoln Community Foundation partnered with other groups -- including the Nebraska Investment Finance Authority, the city’s Urban Development Department, members of the real estate and business world -- to consider the condition and potential of the area south of the Capitol, which includes parts of the Near South and Everett neighborhoods.

A few months later, they hired a community planning consultant from St. Louis to help.

The process was thorough. When the consulting firm submitted its 166-page final report last fall, it included more than 550 pages of reference material -- detailed maps of property types, ownership and conditions, parking patterns, notes from hundreds of interviews with residents and the results of multiple public meetings and work sessions.

The process was also, at times, controversial. Some bristled at an early nickname for the area, SoDo. But their real concern was gentrification, that revitalizing the neighborhood would drive up property values and push out some of Lincoln’s lowest-income, most demographically diverse and vulnerable residents.

So in September, the nonprofit South of Downtown Community Development Organization was born. And in January, its board of directors hired Ryba.

Ryba had watched the process unfold, and he’d heard the fears of gentrification, and he didn’t want to let that happen. That’s one of the reasons he took the job, he said.

“I’m ready to take that on directly. Any meeting that I have, any group I work with, that’s going to be a topic. This organization is to add value and improve quality of life; we're not in the business of kicking people out of their neighborhoods and houses.”

Ryba used to live in the area, and he's familiar with its red flags. The life expectancy is years lower here than in other areas. More than 90 percent of people here are renters, not necessarily invested in their homes and neighborhoods.

It’s a food desert, underserved by grocery stores. It lacks health care services. It has a reputation for high crime. It offers few jobs.

But it also has some of the city’s most historic homes, some of its richest cultural diversity. Assets worth building on.

“Often we get focused on properties and the physical aesthetics, but we have to remember people make the neighborhoods.”

So he’ll focus on the people initially. Elevating their voices, he said. Letting them determine the area’s future. And pulling them together, with block parties, concerts and other gatherings.

“The social capital piece is what we’re going to focus on, celebrating the diversity, creating places for people to interact, celebrating our differences.

That type of community building is abstract, but it lays the foundation for more tangible steps.

Like identifying vacant properties and replacing them with all types of housing. Improving access to health care, education, drug and alcohol programs and job training. Making sure streets are safer, with adequate lighting and unbroken sidewalks.

The consultant’s recommendations are a good starting point, said Matt Schaefer, a member of the South of Downtown board and president of the Everett Neighborhood Association.

But they aren’t the blueprint the board will require Ryba to follow.

“Shawn is going to spend a lot of time listening to residents, listening to business owners,” Schaefer said. “And then he’s going to try to channel that into projects that can make the neighborhood a little better.”

These changes take time, Schaefer said. He expects Ryba to identify short-term goals and then start working on longer-term projects. The community development organization will be around for decades, he said.

“If you look at other neighborhoods around the country, you’ll find it’s not something that happens overnight,” Schaefer said. “It’s slow work, but important work.”

And Ryba is the organization’s only employee for now. Which is why he'll start by trying to get the area's residents alongside him.

“It’s only me. But if you can get people bought in and investing and caring and showing ownership, that’s going to sustain itself. That’s how it’s going to work.”

To read the consultant's recommendations, and see other information, go to lincolnsouthdowntown.org.

Plan for south of downtown to be unveiled next week

A 25-year plan to improve the area immediately south of downtown Lincoln while preserving its diversity in people, architecture and economics …

The nickname "SoDo," which irritated some residents, is gone from the latest information about revitalizing the area around the Capitol and so…

City officials invited residents and interested parties to a meeting Thursday on planned improvements to the neighborhoods south of downtown.

A community meeting aimed at people who live in the Near South, South Salt Creek and Everett neighborhoods on Dec. 10 will allow residents to …

Members of the Great Plains Trails Network celebrated a year of "big wins" during their annual meeting on Sunday.

For the last five years, clusters of self-storage units have popped up around the city, mirroring new developments as people look to pack away…

Milestones in business: Honors and awards

As part of Directions '17, the Journal Star invited readers to share honors businesses or employees received in 2016 as best in the state, reg…

A sweeping view of the Haymarket awaits the first owner of a nearly complete condo in the Schwarz Paper Co. building at Eighth and O streets.

Fountain installations are next step in Capitol courtyard project

Capitol Preservation Architect Tom Kaspar contributed to the design of the new courtyard fountains that are being installed this week and next.

Your yard is waking up, and it’s thirsty

The landscape specialist called the conditions a perfect storm.

The 13,000 renters in the Near South and Everett neighborhoods are surrounded by other renters -- renters next door, renters upstairs, renters below.

The 23-year resurrection of a former Near South eyesore

The boiler was broken and the pipes had burst and the wiring needed to be replaced, but that's not what made Laurie Barger Sutter's oldest dau…

They came up with a simple plan to give voice and power to those living in Lincoln’s lowest-income neighborhoods:

Showing off Hawley, and its hamlet

Tim Rinne planted herbs near the hydrant, sweet potatoes near the sidewalk.

The first and second floors of 1105 E are all bare studs, exposed electrical wires, spongy floors that sag beneath your weight and the black s…

They asked, you answered: South of Downtown group starting to shape plan for area

The South of Downtown Community Development Organization’s small staff took on a big task when it formed a few years ago: Ask the people who l…

One block of E Street, two problem properties — and a nonprofit's plan to offer affordable housing

Gutted to the studs, with holes in the roof above, a collapsed basement below and squatter trash strewn all over, the house at 1120 E St. seem…

An area south of downtown with what an expansion of the F Street Community Center might entail.

The area south of downtown with the F Street Community Center marked.