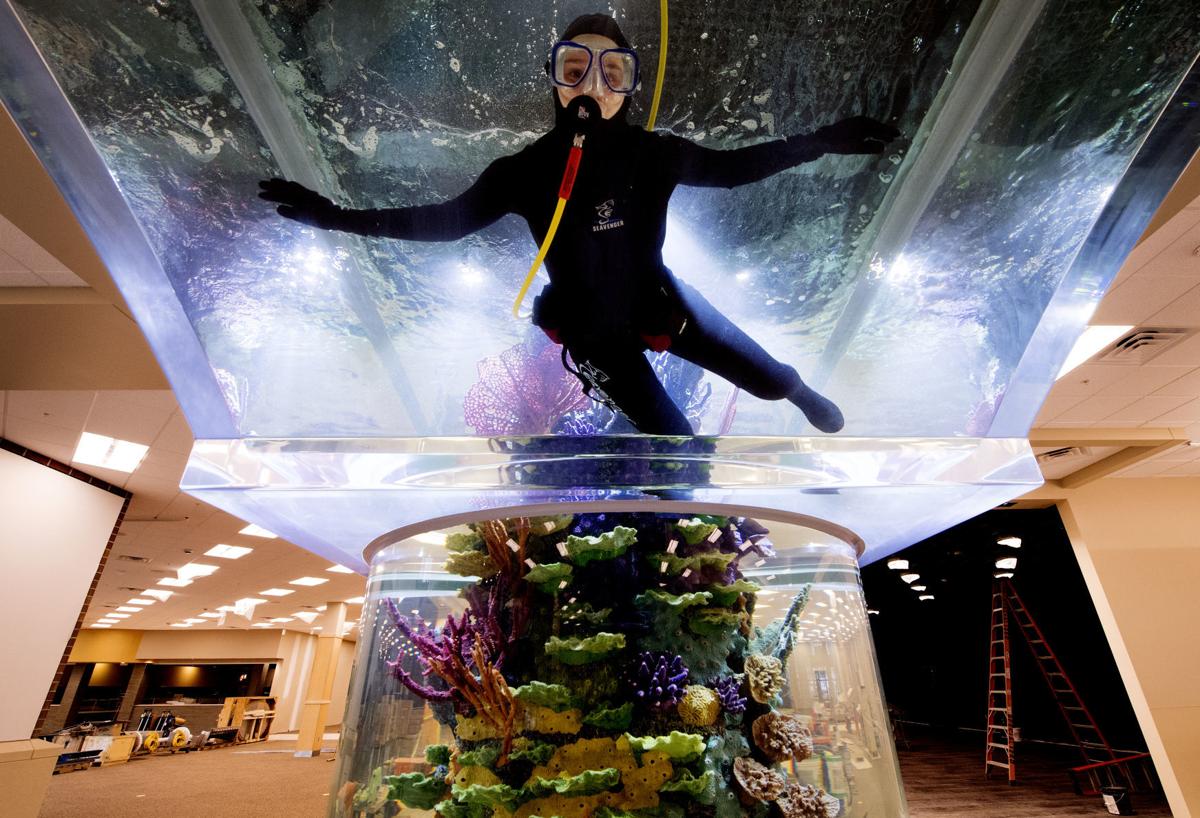 Diver Danielle Cast swims across the 16,000-gallon saltwater aquarium at the new Scheels store at SouthPointe Pavilions on Friday as she helps add 450 fish to the tank. The new store will open Sept. 27. 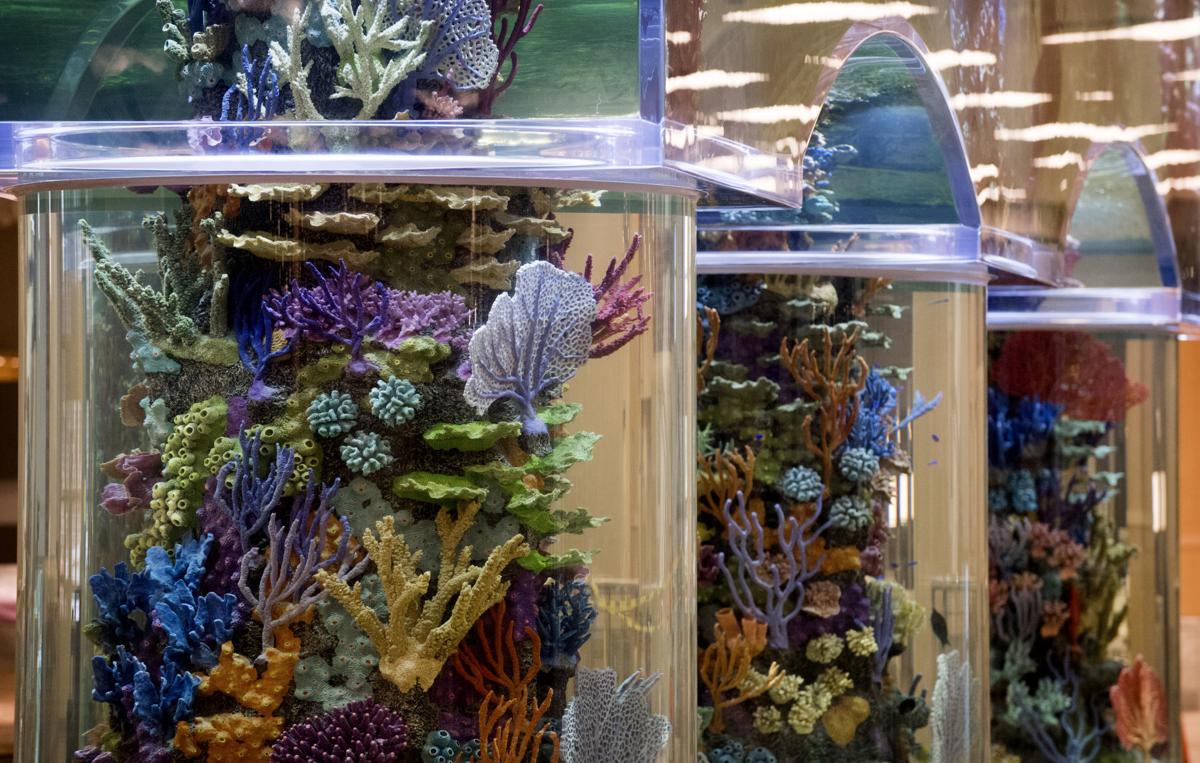 The Scheels aquarium will have more than 600 fish by the time the store opens Sept. 27. 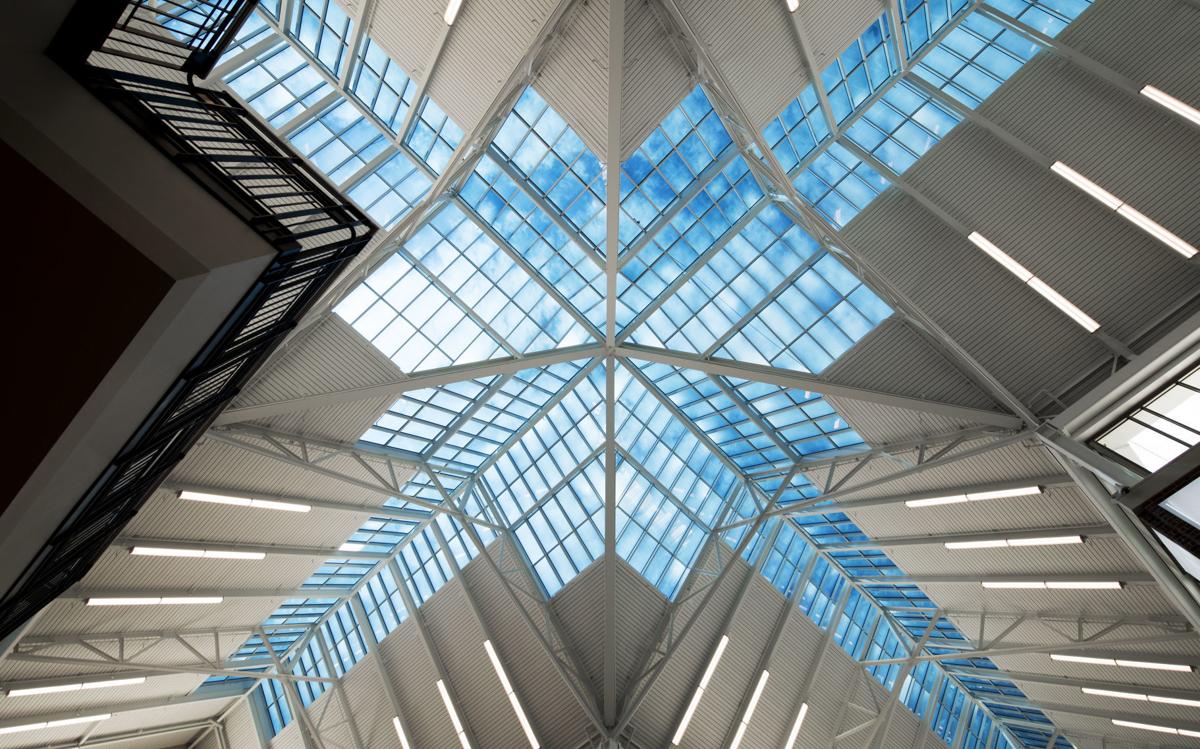 It will still be more than two months before shoppers get to see the new Scheels store at SouthPointe Pavilions, but Friday, some of the store's new residents got their first look.

The sporting goods company added more than 450 fish to its 16,000-gallon saltwater aquarium, which will be one of the attractions at the 220,000-square-foot store.

Jerry Ohrn, of Reef On, a Utah-based company that provides the fish for Scheels' aquariums, said there will be more than 100 species of fish in the tank, with some coming from as far away as the Middle East.

“Some of these fish have more stamps on their passports than most people do,” Ohrn said.

The fish, which included tangs, angelfish and clown fish, were flown in Friday from Los Angeles to Omaha.

Louie Sikich, store leader of the Lincoln Scheels, said the fish are introduced well ahead of when the store opens to ensure they adapt to the environment and to allow time for any fish that become ill or die to be removed. He said Reef On has provided fish for aquariums in six other Scheels stores.

More fish will be introduced in a few weeks, and Ohrn said the aquarium will have more than 600 by the time the store opens Sept. 27.

A local diver will enter the tank every other day to feed the fish and also to clean it.

By the time the new store opens northeast of Scheels' existing 77,000-square-foot store, the company will have spent more than a year and a half building it.

In addition to the aquarium, which will greet shoppers when they enter, the store will have a 65-foot Ferris wheel, a bowling alley, shooting gallery, wildlife mountain and cafe.

The new Scheels store is part of a larger project at SouthPointe that includes a three-level parking garage with 1,000 stalls and nearly 22,000 square feet of new retail space.

The parking garage will be built on the site of the current Scheels store, and demolition will actually start before the new store opens.

SouthPointe earlier this week filed a nearly $12.2 million building permit for the garage, which is forecast to cost about $20 million total. The city voted to implement a 1 percent occupation tax on most sales at the mall to pay for the garage.

Unlike the Scheels construction, which required part of a strip mall to the east of SouthPointe to be torn down and numerous tenants relocated, Lattimer said, there are no plans to relocate any tenants while the parking garage is under construction.

Lincoln close to getting downtown grocery

After multiple delays, Canopy Street Market is set to open its doors next month as Lincoln’s only downtown grocery store.

Pershing Center, sitting vacant in downtown Lincoln for the past four years, is back on the public radar screen.

Biz Buzz: End of an era for Toys R Us, Akin's, Randolph Car Wash in Lincoln

Though its opening is still a year away, construction on the new Scheels store at Southpointe Pavilions hit an important milestone Friday.

HobbyTown to open RadioShack stores in Lincoln, other locations

RadioShack is getting a boost thanks to a Lincoln company.

A police officer investigating a report of a suspicious vehicle early Tuesday morning in downtown Lincoln stumbled upon a shifty, four-legged …

Despite the name, Stonebrook's growth is in metal panels

A well-known athletic wear retailer will be setting up shop at Gateway Mall for a few months.

Nebraska Book Co. said Tuesday that it has successfully completed a restructuring of its balance sheet and eliminated most of its legacy long-…

Mike Bretta said he thought about expanding his toy and collectibles store a year ago when a space opened up next door. But another business q…

'Four Star' a local champion; Lincoln getting a new pet groomer and a new shoe store

More than two years ago, James Plucknett closed the remaining Four Star Drug locations in Piedmont and Bethany and put his focus on Four Star …

The wave of national retailers closing their doors started to hit Lincoln earlier this year, and it has driven the local retail vacancy rate t…

Husker fans and others will have to do without Scheels for a couple of weeks.

Decked out in a black Scheels T-shirt, Randy Rowe was among the first few people in line Thursday for the opening of the sporting goods retail…

Photos: A Ferris wheel, an aquarium and a lot more room at new Scheels store

Diver Danielle Cast swims across the 16,000-gallon saltwater aquarium at the new Scheels store at SouthPointe Pavilions on Friday as she helps add 450 fish to the tank. The new store will open Sept. 27.

The Scheels aquarium will have more than 600 fish by the time the store opens Sept. 27.