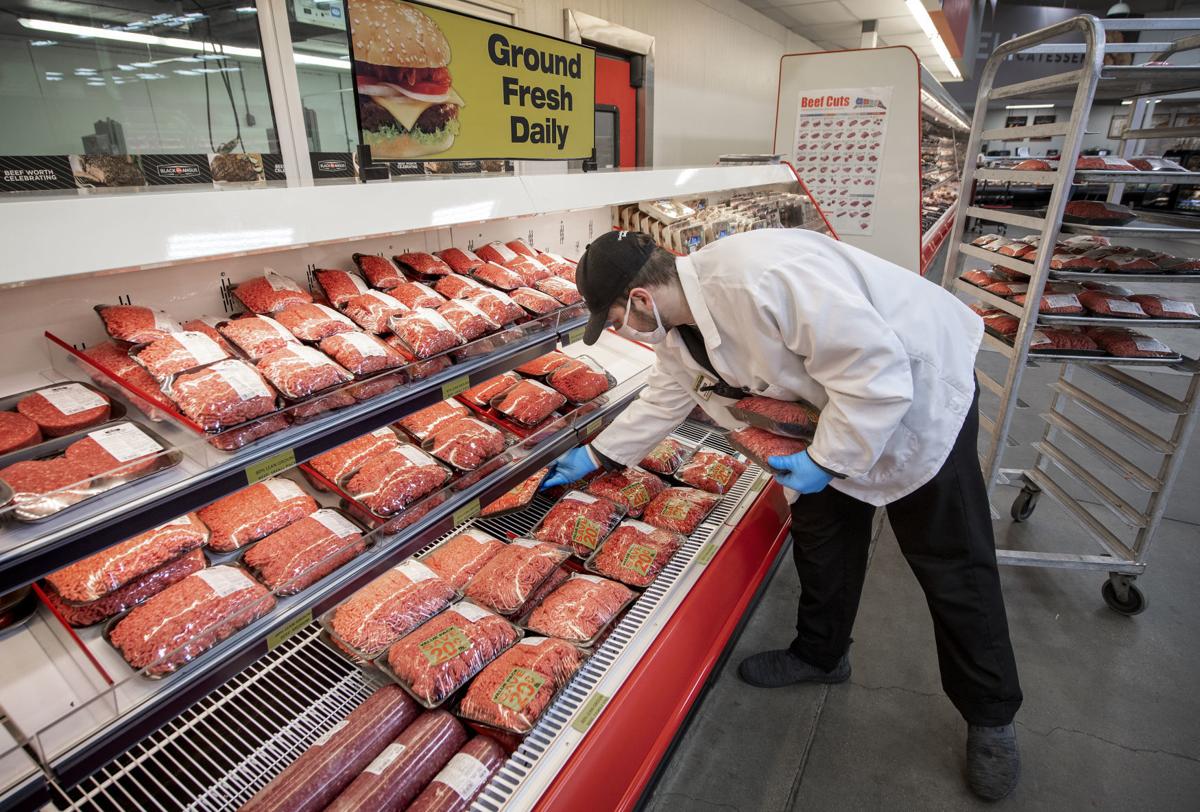 Super Saver employee Jarod Williams stocks the shelves with fresh ground beef Tuesday, May 5, at the 48th and O streets location. B&R Stores, which owns Super Saver and Russ's Market, is not considering putting any limits on what people can buy for now, unlike other retailers, which are limiting meat purchases. 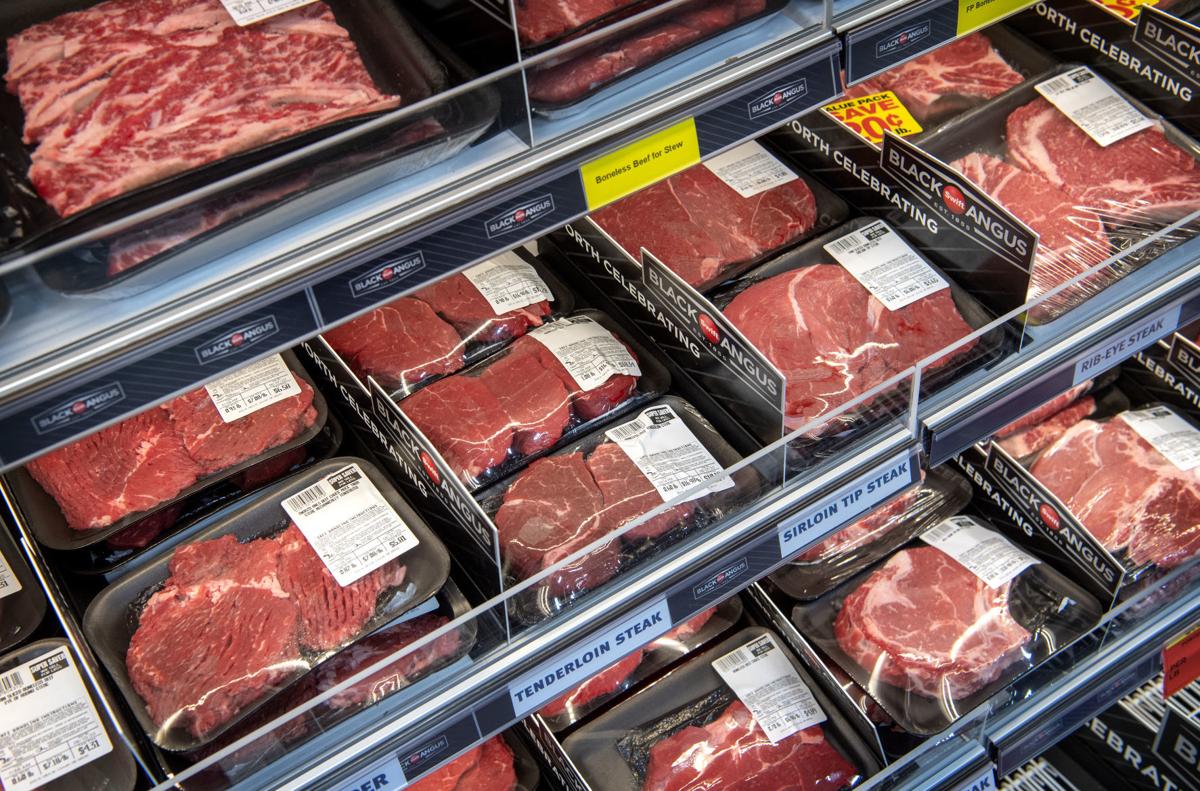 Fresh cuts of steak fill the shelves of the Super Saver location at 48th and O streets Tuesday.

Shutdowns and slowdowns at meatpacking plants because of the coronavirus pandemic are starting to lead to much higher meat prices and even shortages in some cases.

Despite an executive order signed by President Donald Trump last week and a pledge by Gov. Pete Ricketts that he would not ask any plants to shut down, three Nebraska operations have done so just in the past week.

Tyson closed its beef plant in Dakota City on Friday and originally was scheduled to open back up Monday. But the company said it will now keep the plant closed until all employees can be tested for COVID-19.

On Monday, Tyson also announced it is temporarily closing its pork plant in Madison this week, and Cargill said it will close its beef plant in Schuyler.

Those closings and others across the country have led to a huge decline in the supply of meat. According to the U.S. Department of Agriculture's weekly livestock, poultry and grain market report, as of Monday, estimated beef and pork production are both down about 35% from last year.

That's starting to lead to at least the potential of shortages in the retail market.

Costco, Walmart and Sam's Club are among the large retailers that have put limits on how much meat customers can buy. For example, Costco on Monday started limiting customers to three packages total of beef, pork and poultry.

Hy-Vee plans to institute similar limits. Starting Wednesday, the supermarket chain will limit each customer to no more than four packages of a combination of fresh beef, ground beef, pork and chicken.

"At Hy-Vee, we have product available at our stores but due to worker shortages at plants as well as an increase in meat sales, customers may not find the specific items they are looking for," spokeswoman Christina Gayman said in an email. "Because of this, we are going to put a limit on customer purchases in the meat department."

Lincoln's B&R Stores, which owns Super Saver and Russ's Market, is not considering putting any limits on what people can buy for now.

"We're asking people not to stock up," said marketing director Marty Jarvis. "Just use what your family needs."

Jarvis said that B&R is seeing higher costs for many pork and beef products and supply is limited. Ground beef is one of the products that's been most affected.

"Cost has really gone up, and supply is down," he said.

For example, ground round, which comes from leaner beef, averaged $4.99 a pound as of Friday, according to the USDA, up 70 cents from the same time a year ago. Ground chuck, a lower-quality product, also was up about 70 cents from a year ago. Beef patties were up more than twice that amount, nearly $1.50 compared with a year ago.

Several media outlets reported Tuesday that Wendy's has pulled burgers off the menu at about 20% of its locations because of its inability to get enough meat. Local Wendy's locations did not appear to be affected.

Not all stores are having issues, however.

Open Harvest, a local cooperative grocer, said it is not seeing any cost increases or supply chain interruptions, which it attributes to the fact that it gets its meat from local and regional small producers rather than large meat companies.

“Our meat supply has been steady,” Elizabeth Norris, Open Harvest’s food service manager, said in a news release. “The fact that our pork, poultry, and beef comes from local vendors, such as Plum Creek Farms, Certified Piedmontese, Prairie Preserve Beef, Erstwhile Farms and Common Good Farm, definitely helps, as we have not seen any major disruptions in weekly purchasing.”

While retail prices are going up, the prices paid to producers are going down.

Wholesale beef prices are at the highest levels ever recorded, topping $400 per hundred pounds Monday. On the other hand, the prices paid to cattle ranchers are low by historical standards, with live cattle futures hitting an 18-year low recently, and are decreasing.

"Given the concentrated market structure of the beef industry, it may be particularly susceptible to market manipulation, particularly during times of food insecurity, such as the current COVID-19 crisis," the attorneys general said in a letter.

The Nebraska Farm Bureau on Tuesday also urged the state's congressional delegation to support additional funding for agriculture in any pandemic response package that moves through Congress, especially money for livestock producers.

Some pork producers in Nebraska already have started euthanizing hogs that they can't sell because of reduced packing capability, and the state Farm Bureau said it estimated the state's cattle producers could sustain more than $800 million in losses because of the pandemic.

Nebraska will lose about 25,000 jobs this year, which amounts to a 2.4% decline, a number it won't fully recover until 2022, according to the report.

As of last week, there were still more than 30,000 claims that had yet to be processed, as the state saw three years' worth of unemployment filings in less than two months.

The company said in a news release that the update will allow meatpacking companies and other food processors to implement and track best practices for dealing with COVID-19.

The county's report comes on the heels of a round of testing for all workers at Tyson’s Dakota City plant. The county's total is now the highest in the state.

Of the 212 positives, Tyson said 74, or more than one-third, showed no symptoms of the disease.

There have been few if any cases of COVID-19 confirmed in workers at the Cargill plant in Nebraska City.

Henningsen Foods will make about $2 million in upgrades to reduce the amount of pollutants it discharges into the David City wastewater treatment plant. The company will pay a civil penalty of $827,500.

DES MOINES, Iowa — A study released Wednesday by the U.S. Agriculture Department into the disparity between cattle prices paid to ranchers and…

Super Saver employee Jarod Williams stocks the shelves with fresh ground beef Tuesday, May 5, at the 48th and O streets location. B&R Stores, which owns Super Saver and Russ's Market, is not considering putting any limits on what people can buy for now, unlike other retailers, which are limiting meat purchases.

Fresh cuts of steak fill the shelves of the Super Saver location at 48th and O streets Tuesday.