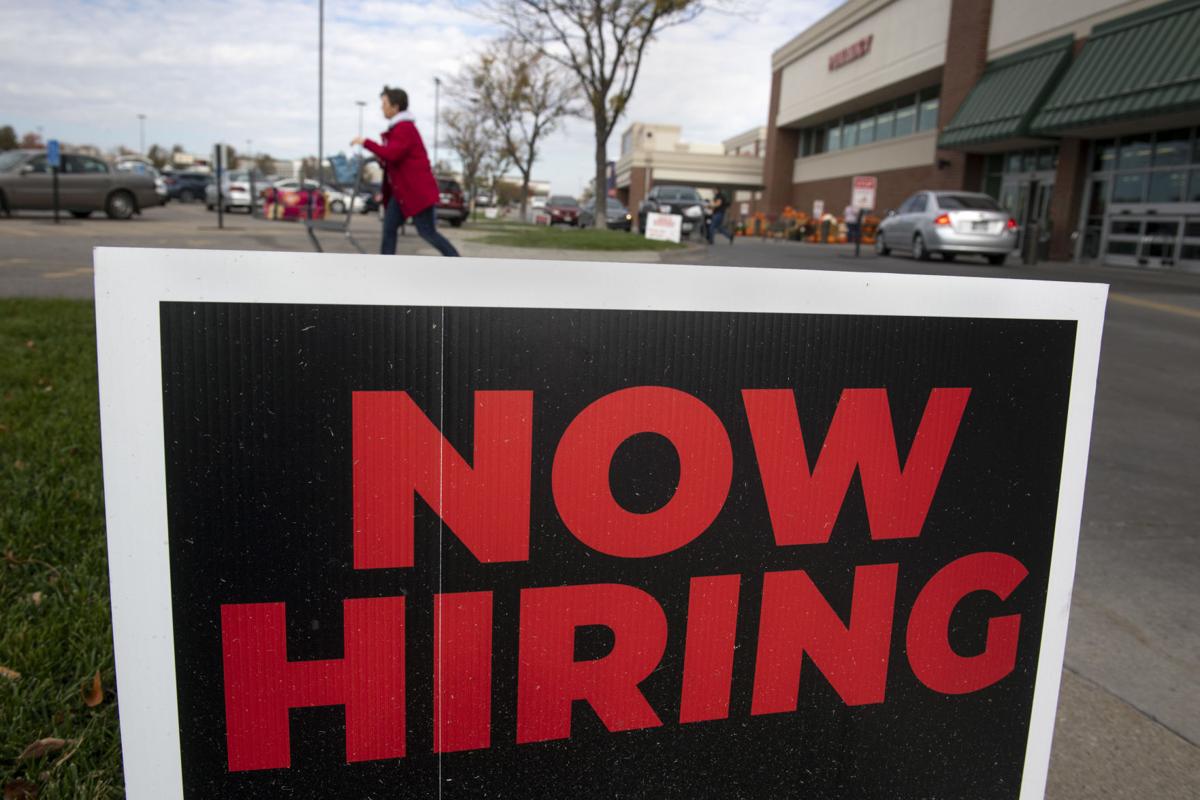 Signs aimed at job-seekers now dot the outside of many businesses across Lincoln, where 9,200 jobs were open in September but just 2,400 people were considered unemployed. 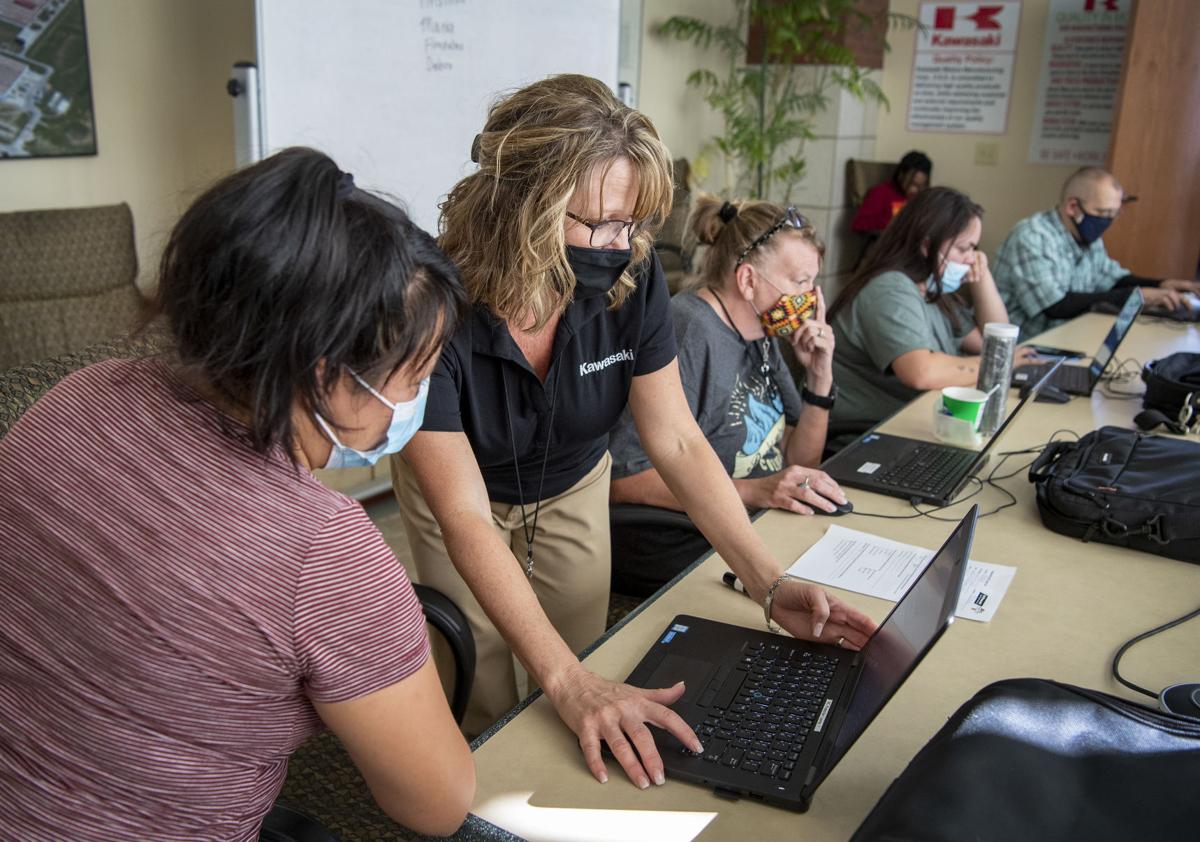 Kawasaki's Heidi Treptow-Reffert (second from left) helps prospective employees use laptops to complete employment applications last month during a career fair at the plant. The manufacturer is looking to hire 550 workers in the next 18 months as it expands, which could be tough with Lincoln and the state both posting record-low unemployment rates.

The state Department of Labor said the 2% rate last month was down from 3.8% a year ago and the lowest recorded in statistics going back to 1976. The rate also tied the lowest rate ever recorded for any state.

The Lincoln Metropolitan Statistical Area also set a record, with an extremely low 1.3% rate, which was down from 3.8% a year ago.

While those numbers show how well the state and local economies are doing right now, they highlight the struggles that businesses face in trying to find workers.

According to the Department of Labor, there are more than 53,500 jobs open statewide. But there are only about 20,700 people listed as being unemployed, nearly 18,000 fewer than there were a year ago.

In the Lincoln area, the number of unemployed people fell from nearly 6,800 in September 2020 to just more than 2,400 last month. That's compared with more than 9,200 open jobs.

"It is good, since it indicates a very robust market for job seekers, and very healthy growth for the state via (gross domestic product)," Goss said.

There are a lot of job openings for workers to choose from, which leads to upward pressure on wages, he said. It also leads workers to be more willing to quit, with the number of Americans voluntarily leaving their jobs hitting an all-time high of 2.9% in August.

The bad, Goss said, is that the wage gains are being largely eaten up by surging inflation.

The ugly, he said, is that Nebraska suffers more than most states from a lack of available workers.

"At this time, Nebraska's nonfarm employment remains 3-4% below pre-pandemic levels. Historically, Nebraska job openings have not resulted in in-migration sufficient to adequately meet demand," Goss said. "This, obviously, inhibits both short-term and long-term economic growth for the state."

Politicians, economists and others have speculated that enhanced federal unemployment benefits have kept large numbers of people out of the workforce. Nebraska ended those benefits in June, nearly three months early, and since then employment in the state has risen by more than 7,000 people.

The number of people employed in the state is now more than 1 million, the highest it's been since March 2020, said Commissioner of Labor John Albin.

Gov. Pete Ricketts lauded the department, saying it has "done great work to help connect Nebraskans to their next career opportunity."

"Communities across the state have supported our small businesses. Companies continue to choose the Cornhusker State as a place to build and grow," Ricketts said. "There has never been a better time to find a great-paying job in the Good Life.”

Nationally, there has not been the same correlation between ending enhanced unemployment benefits and an increase in the labor force, however.

Roughly half the states ended the benefit early, and in those states, the workforce — or the number of people working or looking for work — has risen no more than it has in the states that maintained the federal payment, along with two emergency programs that benefited gig workers and the long-term unemployed, until they ended nationally Sept. 6. Yet America’s overall workforce actually shrank last month. The labor shortage has persisted longer than many economists had anticipated.

Birdsall said it's more complicated than just people losing a job during the pandemic and now needing to get back to work.

She said surveys have shown that a large portion of workers who left jobs, about one-quarter, retired and have no plans to return to work. Another 20% decided to start their own business.

Of the remaining workers, another 20-25% are staying out of the workforce for now because of issues such as lack of child care or continuing worries about COVID-19.

Employers have tried a range of measures to find employees and deal with a lack of workers, including hosting job fairs, offering bonuses and pay raises, and cutting back operating hours. More and more retailers are adding automated checkout lanes, and a restaurant in Aurora even deployed a robot to serve customers.

The national unemployment rate was 4.8% in September, down from 7.8% a year ago.

States Where the Most People Worked Remote Because of COVID-19

About 30% of adults live in households with 1 remote worker

Ex-State Fair finance chief gets 30 days in jail, 15 years of probation for theft of fair money

Patrick Kopke of Hastings also was ordered to pay $158,170 in restitution and perform 300 hours of community service as part of his sentence Friday.

The decline suggests Nebraska's economic growth will slow somewhat over the next six months.

Business is booming as small-business loans in Nebraska shatter records

The Small Business Administration guaranteed nearly $244 million in loans in the state in fiscal year 2021. That broke the previous record by nearly $80 million.

KidGlov became the third company in Lincoln and the fifth in Nebraska to receive the certification.

The state's October unemployment rate marks the first time any state has had a rate below 2%.

Signs aimed at job-seekers now dot the outside of many businesses across Lincoln, where 9,200 jobs were open in September but just 2,400 people were considered unemployed.

Kawasaki's Heidi Treptow-Reffert (second from left) helps prospective employees use laptops to complete employment applications last month during a career fair at the plant. The manufacturer is looking to hire 550 workers in the next 18 months as it expands, which could be tough with Lincoln and the state both posting record-low unemployment rates.