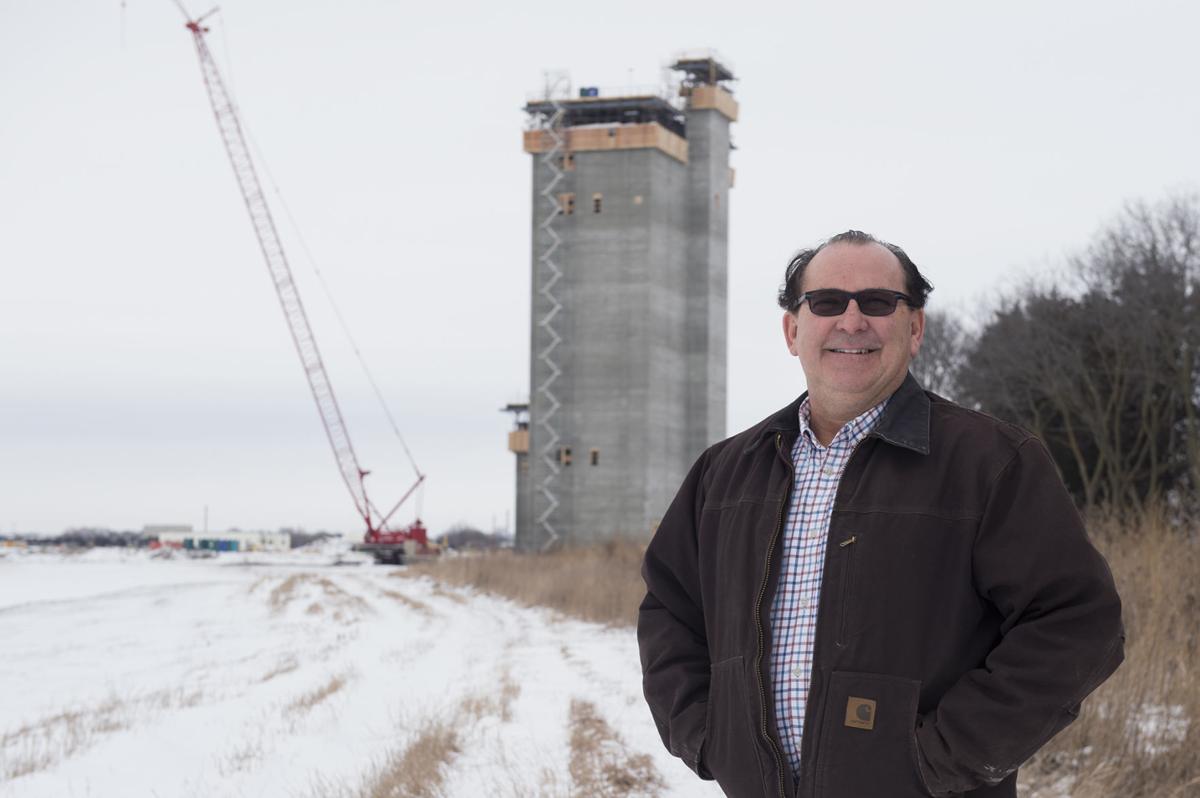 Doug Oertwich stands near the site of Lincoln Premium Poultry's feed mill under construction near Fremont on Dec. 27. Oertwich, a farmer from Pilger, is excited about the opportunity to diversify his farming operation by raising chickens for Costco. 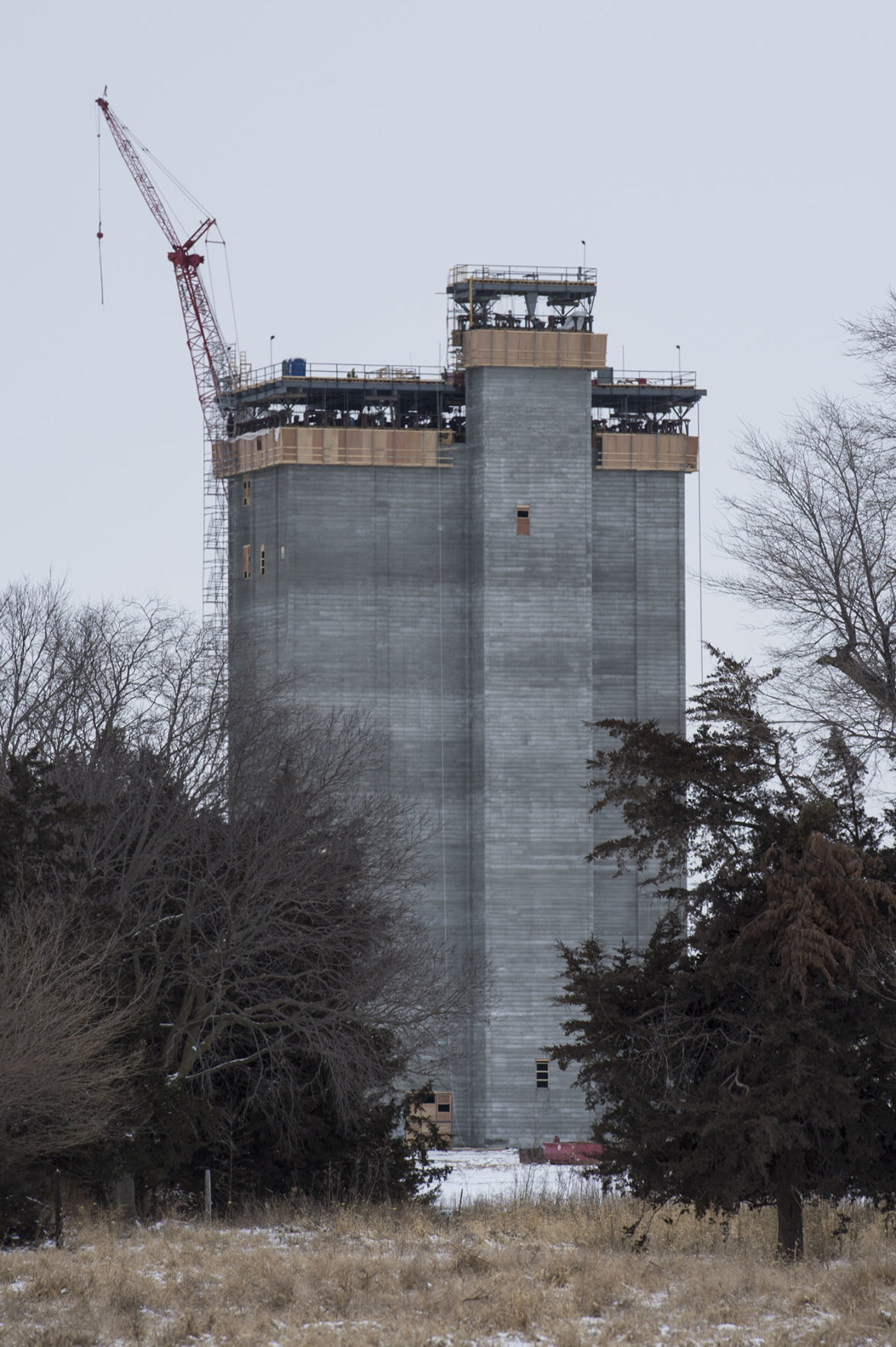 Lincoln Premium Poultry's feed mill is under construction near Fremont in 2017. It is part of a poultry processing complex that will include a hatchery and a processing plant. 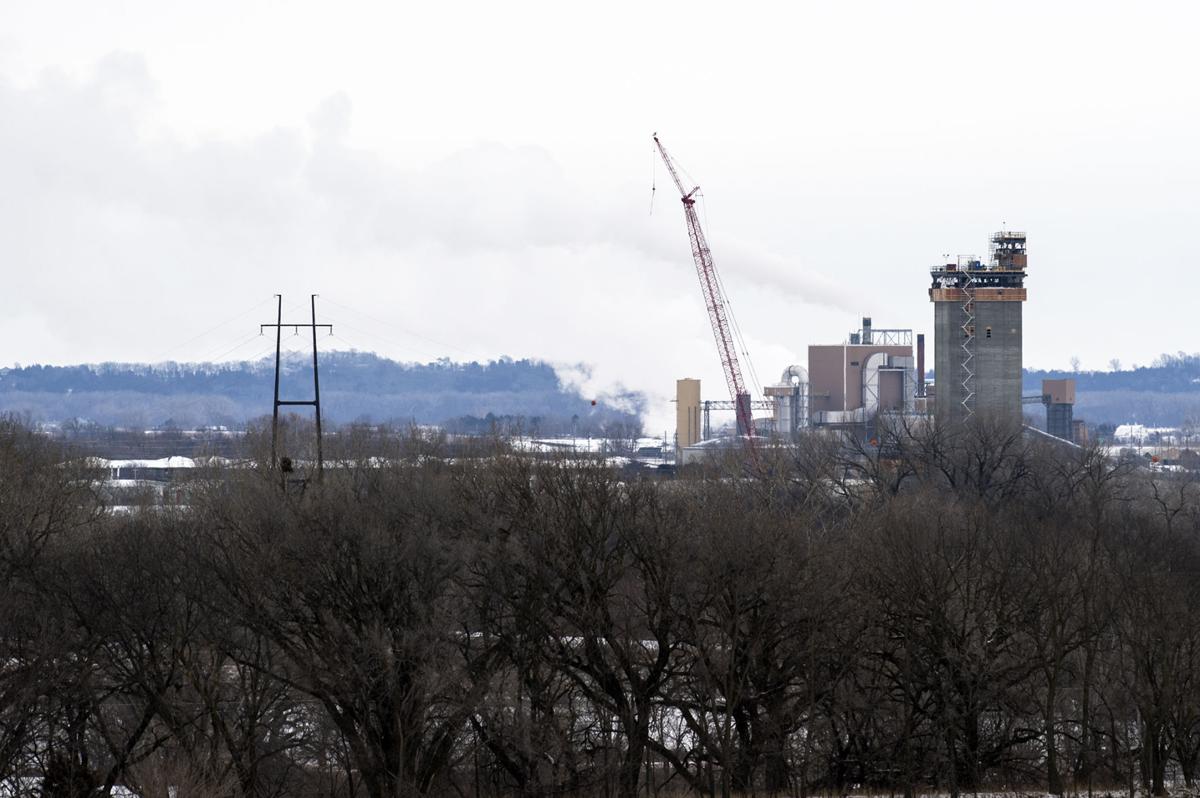 The Lincoln Premium Poultry feed mill (right) is visible from U.S. 77 south of Fremont. Hormel has a processing plant in Fremont, one of the many agricultural industries with operations in the town.

The plan was always for Nick Oertwich to come back to work on the family farm near Pilger after attending the University of Nebraska-Lincoln.

But following graduation, Oertwich stayed in Lincoln to work. Now, with the financial incentive that raising chickens for Costco promises, he plans to move back to the area to work on the family farm.

Nick’s father, Doug, who serves on the Stanton County Planning Commission, found out about the opportunity when he was asked to serve on an advisory board for Lincoln Premium Poultry, the company that is building a large processing plant in Fremont that will provide broiler chickens for Costco. The board consists of one person from the six counties surrounding Dodge County, where the plant is located.

Lincoln Premium Poultry is managing the operations in Fremont, including recruiting farmers to sign contracts to raise poultry, overseeing construction of the processing facilities and recruiting employees for when the plant opens in about a year.

“I’ve worked with guys that raise hogs and cattle, and like any other animal, everything is in the details,” Oertwich said.

Raising poultry will be a first for many of the 125 producers Lincoln Premium Poultry is hoping to sign to contracts. To help, the company plans on building a show house where producers and prospective producers can see how operators run the computers and equipment in poultry houses. The company also will send field technicians to help area farmers and make sure best practices are implemented and followed.

As of mid-December, Lincoln Premium Poultry was in the later stages of negotiations with 80 area farmers. The company anticipates it will be recruiting operators through the late spring and early summer.

One of the first formal applications, from a Valparaiso-area farmer, is going before the Saunders County Planning Commission on Monday.

Oertwich has traveled to Delaware, Maryland, Alabama and Georgia with other members of the advisory board to meet producers and hear about their experience raising birds.

“We didn’t meet anyone who said they wouldn’t do it again,” Oertwich said of the positive feedback he heard from producers around the country.

Despite the positive response from farmers, not everyone is eager for the poultry processing plant to open in Fremont.

John Hansen, president of the Nebraska Farmers Union, said the organization has encouraged people to form a producers association so they will have negotiating power in the future if they need it. Hansen said the Farmers Union has not taken an official position on the processing plant since it has members that both support and oppose it.

“The problem occurs when there is a disparity in level of power in a contract,” Hansen said. “How do you protect the smaller, less-powerful entity when the more-powerful party in the agreement is going to shape the contract for their benefit?”

Hansen added that from what he knows of the contracts, they're better than most in the industry.

“It’s all relative, though, because the reputation of contracts in the poultry business is awful," he said. "So having a higher standard isn’t in itself greater for the farmer."

Hansen cited the 15-year contract term as a positive sign, since farmers will be making $2 million to $2.5 million investments when they construct four poultry houses. Signing a longer contract mitigates risk by guaranteeing farmers 15 years of revenue.

Project manager Walt Shafer said the contracts being offered are some of the best in the country.

“Nebraska farmers are making a sizable investment, and they are trusting in us to do the right thing by them,” Shafer said. “So we are working with Costco to put out a very, very fair contract that gives them every benefit of the doubt.”

Costco recently added a square-footage incentive to producers for completing construction of poultry houses. If a farmer completes four poultry houses, he or she could receive a check for $120,000, while barns for laying hens may qualify for twice that amount.

“That’s one way for the company to invest in these farmers up front," said Jessica Kolterman of Lincoln Premium Poultry. “And it really helps offset costs on the front side.”

This is the first vertically-integrated poultry operation Costco will be involved with, processing up to 2 million birds a week. In remarks at the groundbreaking for the project in June, Gov. Pete Ricketts said the plant is projected to have a $1.2 billion economic impact to the state, or about 1 percent of the state’s economy.

The processing plant will include the latest technology and advancements in automation, but the processing operation, hatchery and feed mill are estimated to have a labor force of 800 to 1,000 employees.

Kolterman is working with local career-training organizations and the Greater Omaha Chamber of Commerce to identify underemployed or unemployed populations to move into jobs at the poultry plant when it opens.

“People come to work in these facilities from 30-60 miles away,” Kolterman said.

Kolterman and Shafer said they've floated the idea of sharing transportation costs or lining up busing if there are large numbers of employees from the Lincoln or Omaha areas.

On Lincoln shoppers' most wanted list for years, Costco set to open doors on Saturday

Clay Bradshaw isn't willing to speculate on how many people will show up Saturday.

If economic development was a boxing match, you'd be hard-pressed to find a better pound-for-pound fighter than Nebraska.

A proposed large poultry operation in southwestern Lancaster County will have to wait two more weeks to see if it can move forward.

Doug Oertwich stands near the site of Lincoln Premium Poultry's feed mill under construction near Fremont on Dec. 27. Oertwich, a farmer from Pilger, is excited about the opportunity to diversify his farming operation by raising chickens for Costco.

Lincoln Premium Poultry's feed mill is under construction near Fremont in 2017. It is part of a poultry processing complex that will include a hatchery and a processing plant.

The Lincoln Premium Poultry feed mill (right) is visible from U.S. 77 south of Fremont. Hormel has a processing plant in Fremont, one of the many agricultural industries with operations in the town.