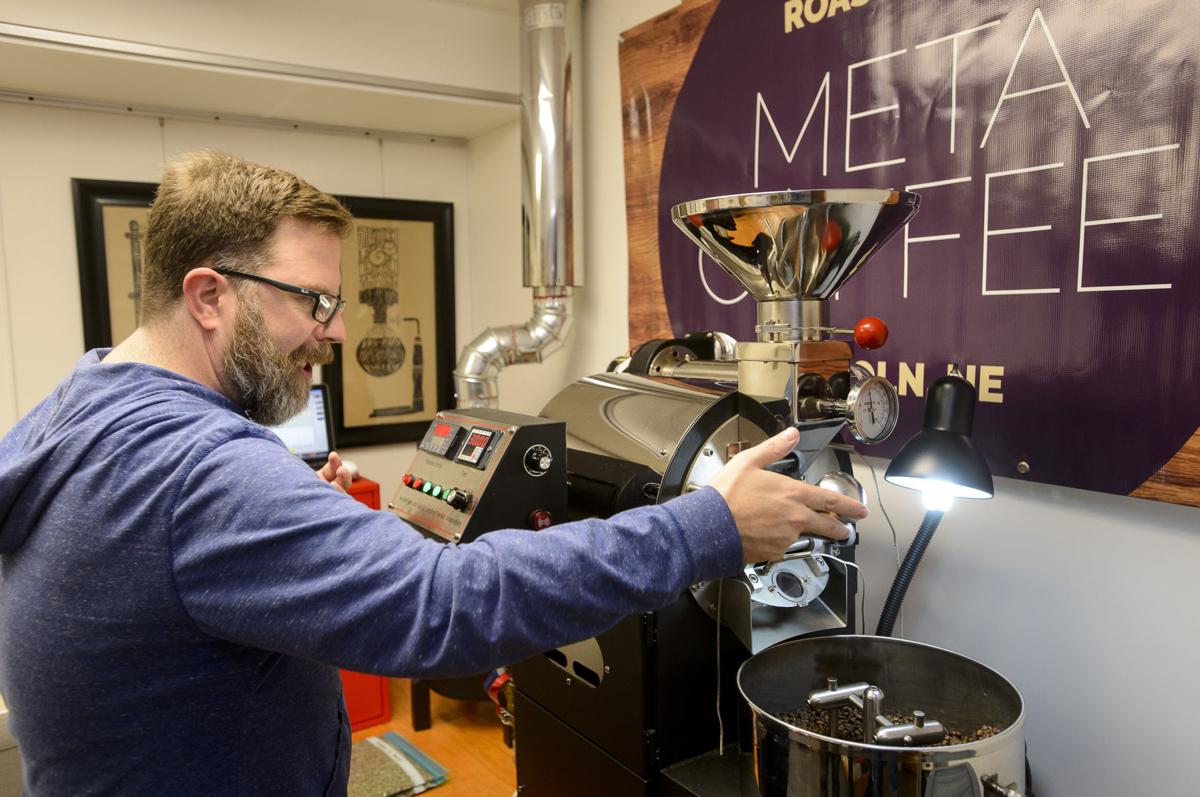 Mike Bratty, co-owner of Meta Coffee Lab, empties a batch of freshly roasted coffee beans into a cooling bin on Thursday carved out of the basement of his home in east Lincoln. Bratty uses temperature probes connected to a laptop and a good old-fashioned smell test to perfect his roasting batches. 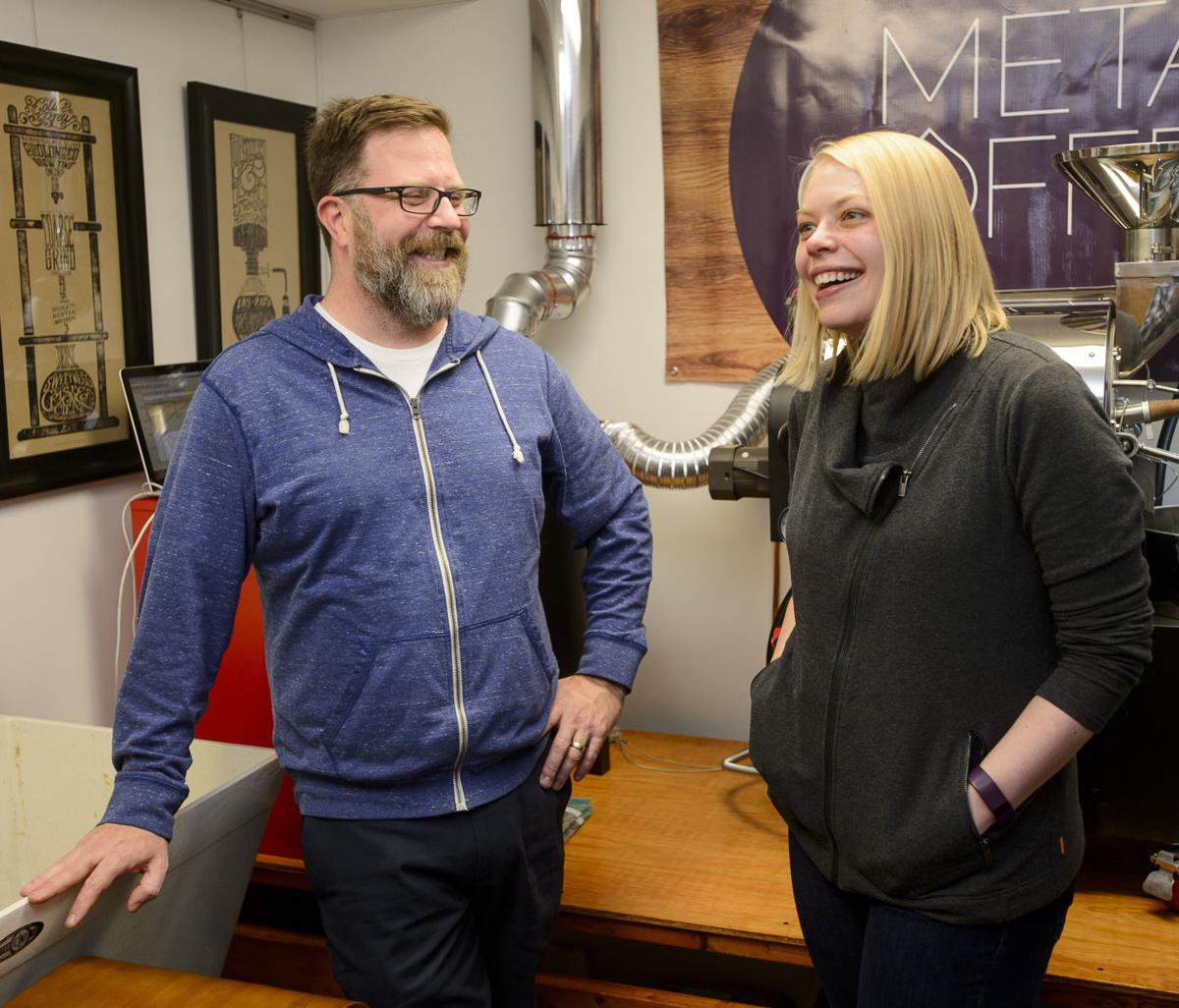 Suzanne and Mike Bratty, owners of Meta Coffee Lab, stand in front of their coffee roaster on Thursday in the roasting and tasting room carved out of the basement of their home in east Lincoln. 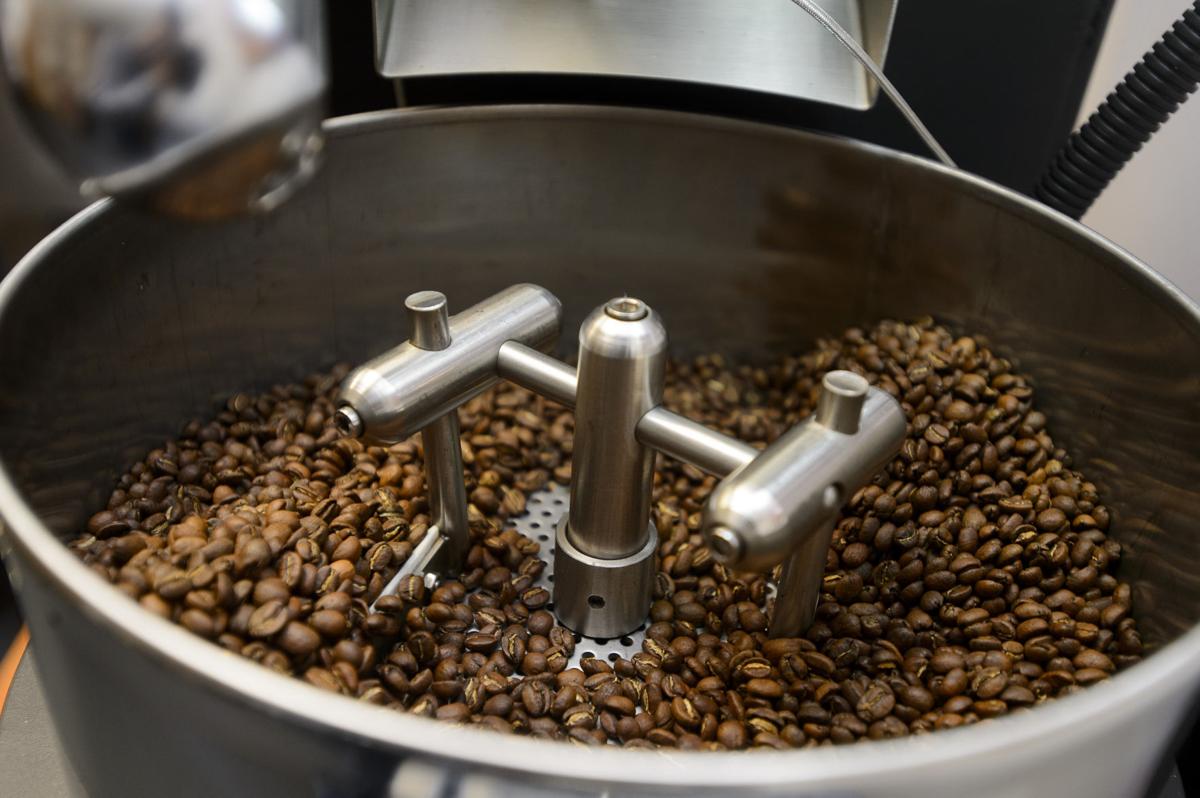 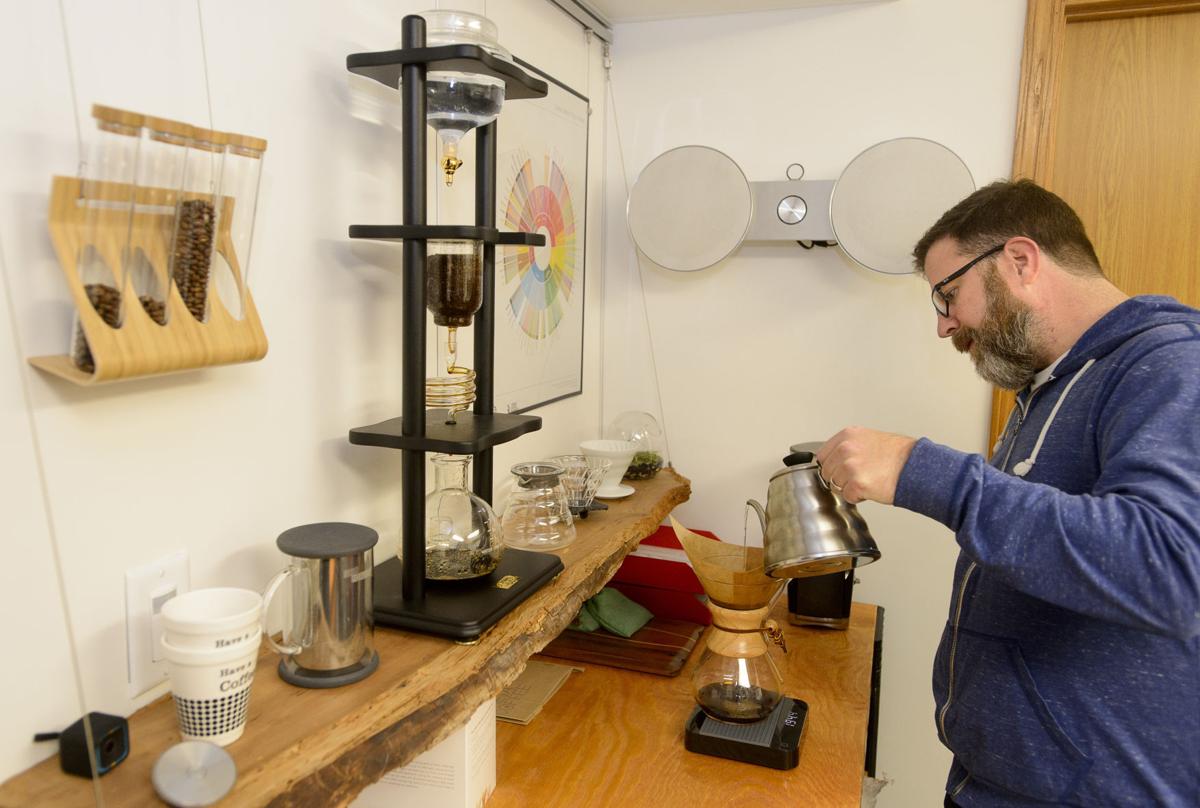 LINCOLN, NEB - 12/08/2016 Mike Bratty, co-owner of Meta Coffee Lab, uses a scale to carefully measure hot water as he brews coffee using a Chemex Coffeemaker on Thursday, Dec. 8, 2016, in his roasting and tasting room carved out of the basement of his home in east Lincoln. MATT RYERSON, Journal Star

There’s this book that Mike Bratty and his wife, Suzanne Seberg, read called, “The Lean Startup: How Today’s Entrepreneurs Use Continuous Innovation to Create Radically Successful Business.” The author advocates for startup business owners like Bratty and Seberg to take a minimalist approach to growth while creating a viable product, investing progressively but cautiously while responding to interest in what they’re selling, which, in the Lincoln couple's case, is small-batch coffee.

“And then you end up with a coffee roaster in the basement,” Bratty said.

Bratty and Seberg both have full-time jobs, but over the course of 2016, Meta Coffee Labs has become an incrementally larger part of their lives -- and their town home's floor plan. This fall, they installed a fully functional coffee roastery downstairs.

Once a week, the faint smell of freshly roasted java vents out from their rooftop into the couple's neighborhood, a couple blocks from Lincoln East High School. They got permission from the homeowner's association and give bags of beans to their neighbors as a thank you, Bratty said.

Meta Coffee has been a Lincoln business since 2015, when the two could first be found at the Haymarket Farmers Market selling nitrogen-pressurized cold brew coffee from a tap atop a custom-made tricycle that Bratty biked 50 minutes from their house near Lincoln East High School to downtown.

During their first year at the market, Zipline Brewing Co. co-founder Tom Wilmoth had a cup and reached out to Bratty at the beginning of this year about selling nitro cold brew at the Lincoln brewery’s taprooms.

“He basically said 'we want your product on tap here and we’ll wait as long as it takes to get it done,'” Bratty said.

That patience was key to Bratty, who at the time was roasting small batches of coffee beans in a drum connected to a propane grill in his garage. And this was a step up from how he got into roasting beans a decade ago, by way of a Jiffy Pop.

Coffee has been a big deal to Bratty for much of his life. He and Seberg can laugh now about a gift he gave her just a few weeks after they started dating in 2012. It was of course a coffee maker.

“Mike’s a very generous man and he wanted me to drink good coffee,” said Seberg, who now brings a cup of Meta with her to Madonna Rehabilitation Hospital, where she's a speech language pathologist.

Roasting coffee for Bratty was a passion that first percolated in Portland with the wrong kind of popcorn popper. A decade ago, Bratty was living there and working for Arakawa Hanging Systems, a company that provides suspension installation systems for the Smithsonian’s museums, among others. (He continues to work from home for Arakawa since his move back to Nebraska -- he’s originally from Omaha.)

While living in Portland, he grew deeply interested in artisan coffee while also trying not to go deeply in debt. The price of a bag of beans from his favorite coffee shops ran $20 or so. When he read an article offering do-it-yourself tips to roasting coffee beans in a popcorn popper, he invested $5 in a secondhand machine and ordered a bag of green beans online.

“Being cheap and wanting to drink good coffee, I just started doing it for myself,” he said.

Instead of a popper that circulated hot air through the sides of the unit-- the recommended thrift store find -- he wound up with one that heated beans only from the bottom. It required him to be attentive to the process, shaking the machine to get as close to an even roast as he could.

Nowadays, Bratty has a little bit more control over the operation thanks to the North TJ-072, a small-batch, industrial-strength roaster he and Seberg dipped into savings to purchase from a supplier in Minneapolis. This summer, Bratty and Seberg’s father, Lewis, a former electrical inspector for the City of Hastings, spent weekends converting the room at the bottom of the basement staircase into an inspection-passing coffee roastery.

“He kind of showed us a lot of the techniques and the steps,” Suzanne Seberg said of her father, who passed away in October. “We’d never built a room before.”

The cables and fasteners suspending chemistry class-like brewing equipment on a repurposed wood plank, however, are the same gear that hang Rembrandts in museums that Bratty works with. The room is a combination of Seberg ingenuity, Bratty’s day job and the couple's passion for coffee.

On Thursday, Bratty poured 1 ½ pounds of green coffee beans of Ethiopian origin into the roaster’s drum once the machine was heated to 380 degrees. The temperature inside dipped initially as the beans were added, then slowly rose.

Soon after he said that, the sound of beans tumbling inside the drum was interrupted by a round of crackling akin to popcorn popping. Bratty said that was the beans’ cellulose structures fracturing, allowing water to escape. He checked the readings popping up on a graphing application on his laptop.

“I never did graph doing the popcorn popper, obviously, or doing the grill -- I never had that chance,” Bratty said. “No data control at all. So I did everything just by sound and smell. And that’s kind of how I still do it, but now I just have the graphing data to help me along.”

Eight minutes and 36 seconds after the process began, he removed about 1 pound and 2 ounces of lightly roasted, single-origin Ethiopian beans, sweet and floral in taste. Batches like this can be found for sale at Zipline and online at metacoffeelab.com. Bratty said the basement roaster's helped him keep up with demand at the brewery's taprooms and on the website, while also not sending costs and the pace of growth spinning wildly out of control.

“Instead of trying to launch a rocket that could go up in flames, we’ll drive a car and see where we go from there,” he said.

Pick up a bag of coffee beans roasted at Cultiva Labs, and the finished product offers a few clues to the coffee’s origin on the label.

Top 5 spots to get dessert in Lincoln

When I first did the list seven years ago, the city didn’t have that many stores specializing in desserts.

The Original Korn Popper, a downtown staple for decades, is closing its doors after 85 years.

Piedmont Bistro closes after one year

One year after opening Piedmont Bistro, owners Kevin and Karen Shinn have closed the restaurant and bakery at 1265 S. Cotner St., citing finan…

Cottonwood café, bar and bistro brings in a wide range of customers

Café or bar or bistro?

The Lincoln Olive Oil Shop at 201 N. Seventh St. in The Haymarket closed over the weekend, but the owners have plans for a new venture elsewhere.

Mike Bratty, co-owner of Meta Coffee Lab, empties a batch of freshly roasted coffee beans into a cooling bin on Thursday carved out of the basement of his home in east Lincoln. Bratty uses temperature probes connected to a laptop and a good old-fashioned smell test to perfect his roasting batches.

Suzanne and Mike Bratty, owners of Meta Coffee Lab, stand in front of their coffee roaster on Thursday in the roasting and tasting room carved out of the basement of their home in east Lincoln.

LINCOLN, NEB - 12/08/2016 Mike Bratty, co-owner of Meta Coffee Lab, uses a scale to carefully measure hot water as he brews coffee using a Chemex Coffeemaker on Thursday, Dec. 8, 2016, in his roasting and tasting room carved out of the basement of his home in east Lincoln. MATT RYERSON, Journal Star