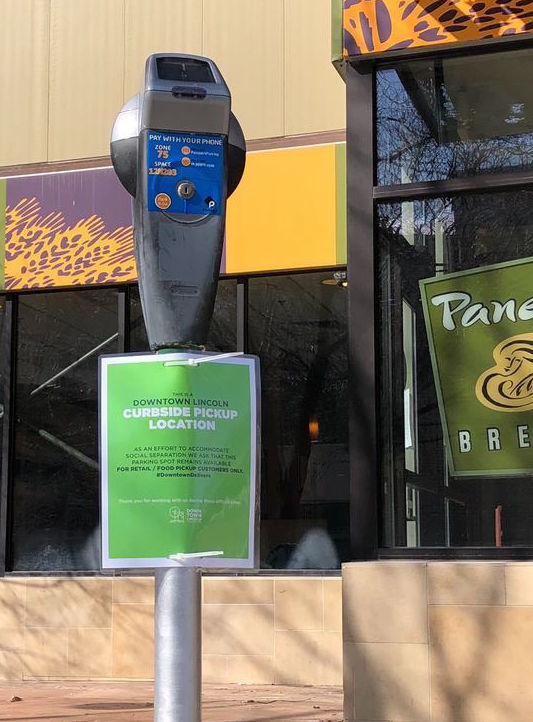 A temporary sign designates free curbside pickup parking at meters in front of downtown Lincoln businesses, such as Panera. 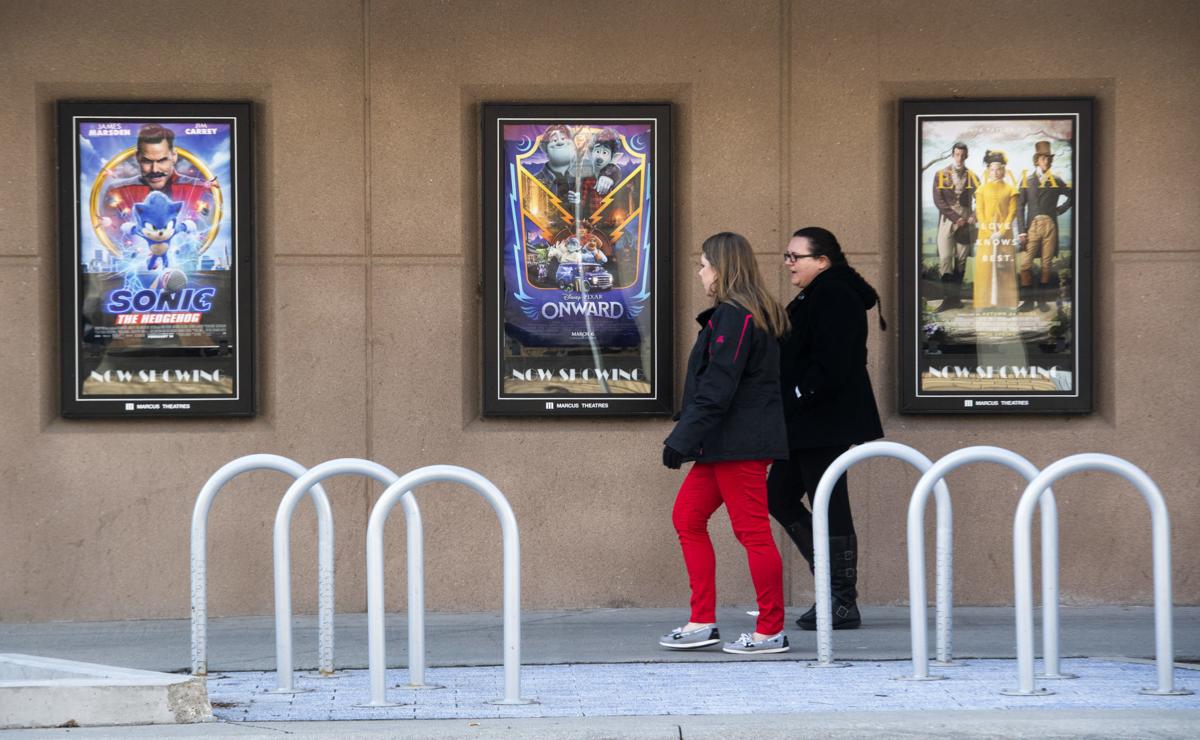 Pedestrians walk past movie posters outside the closed Lincoln Grand Cinema on Tuesday. 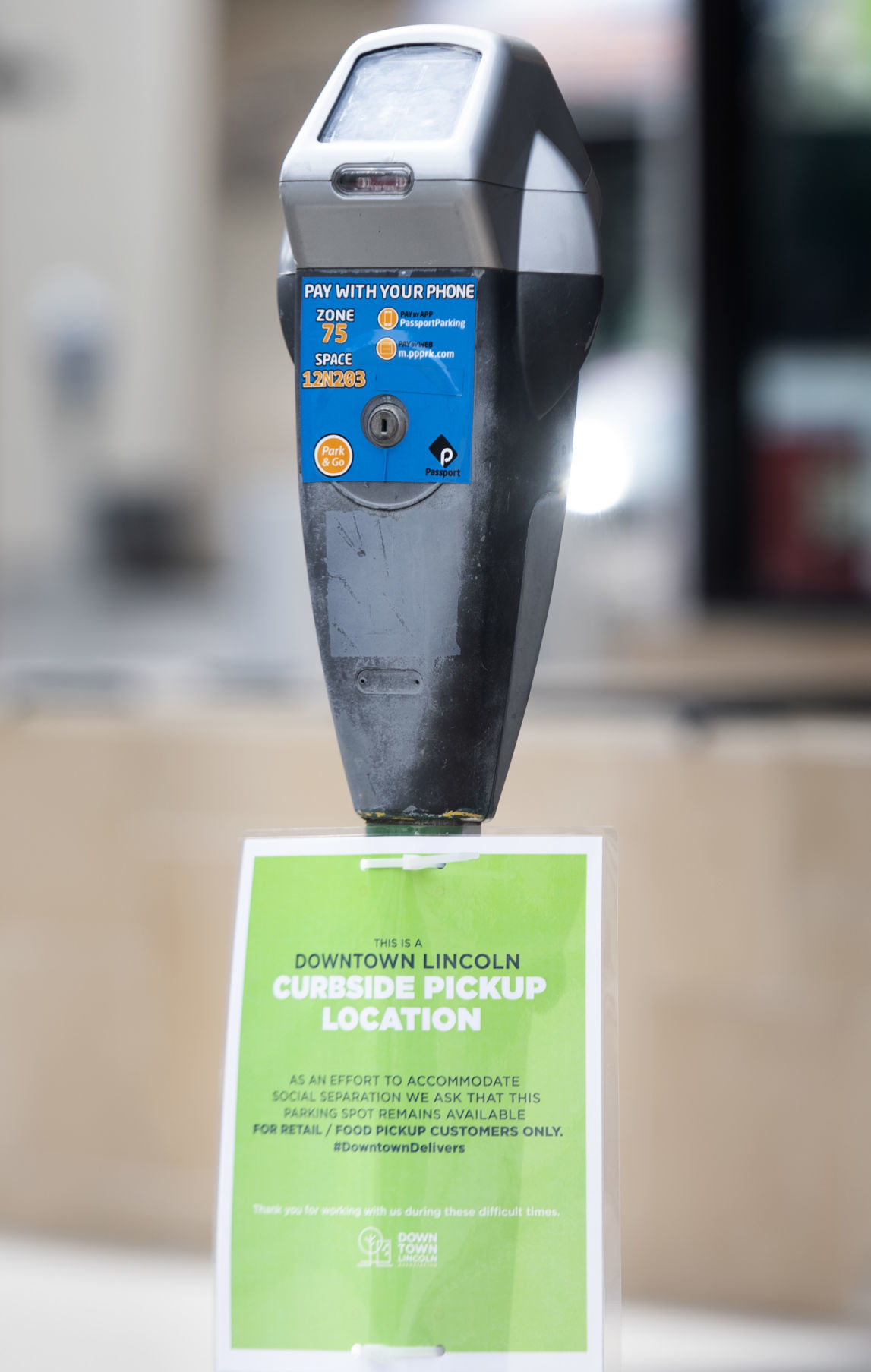 Most downtown bars and restaurants, like others across the city, have followed guidelines to limit crowds by either closing altogether or going to delivery and carryout only.

In an effort to help those restaurants, bars and other retailers who now have to rely on those pickup and delivery orders, the Downtown Lincoln Association is posting signs designating parking spaces near businesses as reserved for curbside pickup.

Todd Odgen, president and CEO of the Downtown Lincoln Association, said he had about 30 requests by Tuesday afternoon. Temporary signs already posted will be replaced by more-permanent ones beginning Wednesday.

Layla Klipic, a shift leader at Hurts Donuts at Ninth and P streets, said the business, which closed its dining room Monday night, has seen a fair amount of orders through the Door Dash delivery service.

Hurts Donuts is just one of many businesses dealing with the new reality caused by the coronavirus.

After announcing Monday that it would limit seating in its theaters by 50% to increase social distancing, Marcus Theaters has now closed them.

On the websites for the Lincoln Grand Cinema and other Marcus locations in Lincoln, a banner reads "Theater temporarily closed."

"Although movie theaters can be a great escape during stressful times, we’ll be pausing operations temporarily," the post reads. "Please check back for updates."

"We have complied with yesterday’s directive in the state of Nebraska (limiting gatherings to 10 people or less), which is why Lincoln theaters are now closed," said Mari Randa, a Marcus spokeswoman.

Marcus announced later Tuesday that it was closing all of its theaters nationwide at the end of the day.

The Ross Media Arts Center also is closed. Movies slated to play there will be rescheduled when the University of Nebraska-Lincoln film theater reopens, according to an email sent by director Danny Lee Ladely.

The number of local restaurants that have announced either total closures or closures of their dining rooms continues to grow and includes Single Barrel, Toast and Lead Belly.

Craft Axe Throwing, which has locations in Lincoln and Omaha, said Tuesday that it was closing for 15 days. Chuck E. Cheese also said it will close its dining rooms until at least the end of the month. Amigos announced dining rooms at all locations will close Thursday.

While Gateway Mall said Monday that it plans to remain open with reduced hours, some of its tenants are choosing to close.

Bath & Body Works, Victoria's Secret and Pink announced Tuesday that they will close all stores temporarily. The stores are owned by L Brands. All three stores also have locations at SouthPointe Pavilions.

The Buckle, which has stores at both Gateway and SouthPointe, also announced it was closing stores through the end of the month. The Kearney-based retailer said it would continue to pay all its employees.

Another tenant at Gateway, American Eagle, said it will close all stores through at least March 27. Granite City said it was closing its dining room and reducing hours to 11 a.m.-8 p.m.

Lululemon, which opened its first permanent Lincoln store last fall, also said it will close all its stores until March 27.

Several stores that have locations at Nebraska Crossing Outlets in Gretna also announced closings, including Nike, Under Armour and Ralph Lauren.

It's not just retail businesses that are trying to limit contact. First National Bank of Omaha said on its website that starting Tuesday all in-person customer contact will be by appointment only. The bank encouraged people to do all normal banking activity through either ATMs, drive-thru windows or online.

West Gate Bank announced that the lobbies at all its bank branches in Lincoln and Omaha will be closed indefinitely starting Thursday. Its drive-thru windows will continue to be open normal hours. Union Bank & Trust will close lobbies at locations with drive-thru service.

Hy-Vee on Tuesday said it will reduce store hours to 8 a.m. to 8 p.m. daily to allow employees more time to clean the store and stock items.

Hy-Vee also announced a number of other temporary changes, including closing dining areas at in-store restaurants and filling online orders only through third-party services such as Shipt and Door Dash.

Iowa-based Fareway, which has a meat market in Lincoln near 84th and Van Dorn streets, also said it will close an hour earlier each day for cleaning and restocking.

Bryan Health on Friday gave an update on the steps it's taking to prepare for the eventual likely spread of the novel coronavirus to Lincoln.

Several dozen Auburn students and other members of the community gathered to watch the game on the big screen.

Two Nebraskans have been identified Tuesday as the state's 22nd and 23rd confirmed cases of the coronavirus.

Travelers are wiping out toilet paper at rest areas along Interstate 80 in Nebraska, leading the Department of Transportation to close the facilities when attendants aren't present.

Hy-Vee at the Capitol had a contract to supply lunch meals and sandwiches weekdays until the end of the legislative session, but because of COVID-19 concerns it has decided to shut down its operation early.

No luck of the Irish: St. Patrick's Day festivities in Lincoln dampened by threat of coronavirus

Rose Hitz said she's sad people can't celebrate like they usually would, but feels for the people who are more closely affected by the spread of the virus.

Lincoln's B&R Stores is the latest grocer to announce reduced hours due to the coronavirus outbreak.

"Walmart stores and Neighborhood Markets will be open 7 a.m. to 8:30 p.m. until further notice. This will help ensure associates can clean and stock products," the company said

As bad as the losses from major event cancellations are, economists say the economic damage they cause is likely to pale compared to the effects of the widespread closings of restaurants, retail stores and other businesses.

Lincoln hospitals and surgery centers are postponing elective surgeries in response to COVID-19.

Many companies have pledged to pay employees for at least the next two weeks, ranging from large retailers such as Kohl's and The Buckle to small local businesses such as Sandy's. But plenty of people are finding themselves out of work with no pay.

Don't want to go to the grocery store or are finding them out of stock of items you need? You've now got another option.

The mall announced in a news release that it would suspend its hours, starting at 7 p.m. Monday, with plans to reopen April 6.

Marcus opening a few theaters next week, but none in Lincoln

The company said it will reopen six of its theaters on June 19, including the Majestic Cinema in Omaha.

A temporary sign designates free curbside pickup parking at meters in front of downtown Lincoln businesses, such as Panera.

Pedestrians walk past movie posters outside the closed Lincoln Grand Cinema on Tuesday.