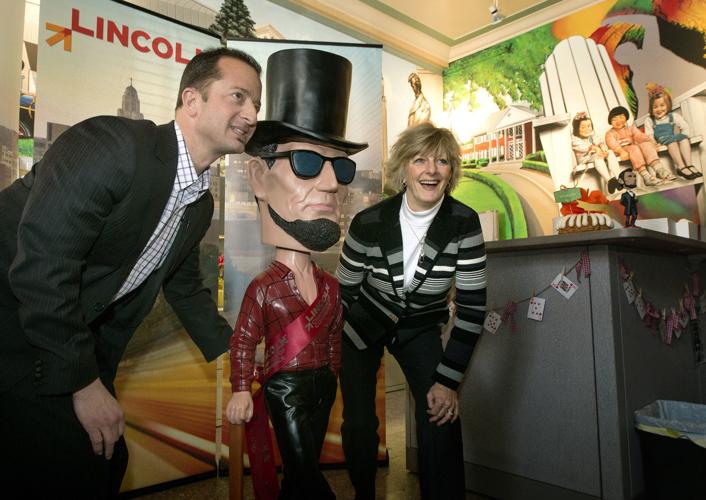 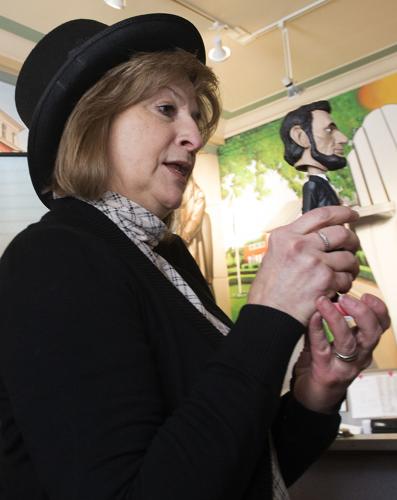 Diane Gonzales, communications manager for the city of Lincoln, sports a top hat and holds an Abe Lincoln bobblehead of her own during the Abe Bobblehead unveiling.

The 5-foot-tall Abe Lincoln bobblehead statue that the Lincoln Convention and Visitors Bureau unveiled Monday is more like a 21st century hipster Abe.

The Abe statue leaning on an ax has tight, black pants, a red-and-black checked shirt with a few buttons open and sleek, black sunglasses.

"This is our buff Abe Lincoln, let's put it that way," said Jeff Maul, the CVB's executive director.

Having a cool, hip Abe is by design.

The CVB chose Lincoln's birthday to unveil its newest attraction, and the hope is that it will play a prominent role in future birthday celebrations.

Younger visitors are "looking for something just a little bit different," he said, and the most successful visitors bureaus have attractions that are centered around some local landmark or well-known local attraction.

One of the most famous visitor center attractions is the wood chipper used in the movie "Fargo" to "dispose of" one of its main characters. The Fargo-Moorhead Convention and Visitors Bureau in Fargo, North Dakota, has the machine, which people come from around the world to see.

Maul realizes bobblehead Abe probably won't rise to the same level, but he's hoping to create a social-media campaign that will help the attraction go viral and bring in visitors from outside the state.

The CVB is running a promotion encouraging people to get pictures taken with Abe and share them on social media for a chance to win a free one-night stay at the Graduate Lincoln, a $50 gift card to John J's Chow Hall and two tickets to see Kinky Boots at the Lied Center for Performing Arts.

We took a look around the Capital City to find the signs and statues beloved to Lincoln residents and many Nebraskans.

The U.S. national women's volleyball team is headed back to Lincoln.

Jeanette Nakada can teach you the Japanese skill of furoshiki, wrapping presents with beautiful cloth. She can also drive an older person to g…

The community garden across the street from First Presbyterian Church has helped feed 30 families for six years, yielding 2,000 pounds of fres…

The Comedy Loft Partnership is bringing a stand-up comedy club to Lincoln, in the Creamery Building at 701 P St.

Nebraska's new tourism tagline is on the lips of Nebraskans, in conversation and social media, whether they love it or not.

Jeff Maul was appointed executive director of the Lincoln Convention and Visitors Bureau in late 2006. Maul has been at the CVB since 2002 and…

Diane Gonzales, communications manager for the city of Lincoln, sports a top hat and holds an Abe Lincoln bobblehead of her own during the Abe Bobblehead unveiling.