The coronavirus pandemic threw a wrench into Luke Moberly's plans, but it also created an opportunity.

The 2020 graduate of Lincoln High School had planned to use a gap year to study Spanish in Uruguay, but those plans fell through because of COVID-19. So he pivoted and focused on another of his loves: computer coding.

"I was working at Chipotle, teaching myself to code on the side," said the 20-year-old who is currently attending Stanford University.

But he wasn't learning enough, and he wanted to "go all in" on learning to build software, so he started searching for coding camps.

Most of them were only being held virtually because of the pandemic, but Moberly found one in London that was offering an in-person option, and he boarded a plane for the UK in October 2020.

He spent a couple of months participating in the Le Wagon Coding boot camp, where he learned about data science and back-end software development.

While he was there, he got an email from his banker about the NMotion Accelerator Studio in Lincoln.

Moberly applied, and was one of only a handful of people chosen out of more than 160 applications.

That program started Dec. 4, two days before the London coding camp ended, so he did his onboarding virtually, flew back to Lincoln on the weekend and started the NMotion program the following Monday.

His first project for the studio was a tech-help service he offered over the holidays last year, doing things such as setting up home theater systems for tech-challenged clients. It was part of an NMotion competition to start a business from scratch and grow it as fast as possible.

He earned $335 as part of a studio challenge, which he donated to charity.

While it was a good exercise, Moberly said there was no "large startup potential" in a tech-help service, so he looked for something else.

He had some other business ideas floating around in his head and decided to focus on one aimed at helping young people become better investors.

Moberly said he'd long been interested in investing but had run into roadblocks trying to open accounts at traditional brokerages. Because of his age, there was tons of paperwork and extra hurdles involved.

He also was intrigued by young investors' interest in cryptocurrencies and so-called "meme stocks" such as Gamestop and AMC.

Lincoln man leaves one business, gets in on ground 'floor' of another

One of the issues Moberly saw is that young investors did not have the knowledge and education to make good investing choices.

"I saw a lot of young people who didn't know how to invest," he said.

Moberly said his goal was to come up with an easy way for teens to open a brokerage account and make investments, while at the same time providing education and support to help them invest wisely.

The result was Bumper, an app that not only allows kids as young as 13 to invest in stocks, but also provides financial education and limits what investments they can make. You can't use the app to invest in cryptocurrencies, for example, nor does it offer options or margin trading.

The company says on its website that its focus is long-term investing, and it gives parents the power to limit trades and have veto power for minors under the age of 18.

Moberly said the app is "completely focused on high school students." The goal, he said, is to get kids familiar with the app and using it and then hopefully keep their loyalty as they get older and have other investing options.

He started working on the app in January, first doing market research by talking to young people, their parents and startup founders.

Moberly was connected with another local man, Harrison Martindale, a 2019 graduate of Waverly High School who attends the University of Nebraska at Omaha.

Initially working only via Zoom, they published a beta website in February, which led hundreds of people to get on a waiting list for the app.

From April through the summer, the Bumper team worked on building the app and finding a broker-dealer partner to actually execute stock trades.

That led to a beta launch of the app in September and a live launch in October.

All that work paid off, as Bumper announced earlier this month that it had secured a $500,000 round of investment led by Invest Nebraska and joined by Nebraska Angels and Wisconsin-based Lancaster Investments.

Ben Williamson, principal and general counsel for Invest Nebraska, said the public-private organization chose to invest in Bumper because it offered "a unique combination of an exceptional founder paired with an audacious goal to solve a problem no one has been able to solve, and doing it in a smart and differentiated way.”

The money will allow Bumper to hire a full-time engineer to add to the team of six that includes Moberly, Martindale, Sourabh Chakraborty and three interns. The company also will spend some of the money on sales and marketing efforts.

The app has already passed 1,000 users, and Moberly said there are plans to add cryptocurrency as an investment option in the next few months, as well as a premium service that would generate revenue.

For now, he plans to stay focused on the investing niche, but he said future plans could include offering other services, such as auto and renter's insurance.

Moberly said he's also had talks with a couple of banks and a couple of credit unions about partnerships that would potentially involve them promoting Bumper to their customers.

Scott Henderson, managing director of NMotion, said one of the reasons Bumper was developed and grew so quickly "comes from a lot of different people and organizations leveraging complementary strengths."

That includes mentors and advisers affiliated with NMotion, but others as well.

For example, Henderson introduced Moberly to Tom Chapman, who has founded a number of startups and now owns his own consulting company in Omaha.

It was Chapman who realized that Martindale and Moberly would be a perfect fit as partners.

"Harrison was in both of my classes at UNO. He was super sharp and was working on a project for one of the classes that was tangential to Luke’s vision for Bumper," Chapman said. "So, I introduced the two and have tried to continue to stay engaged with them as they have grown. They are both super sharp but offer complementary skills and training."

While he's going to school at Stanford, the alma mater of some of the world's most-recognized founders of tech companies, such as Google, Yahoo, eBay and Paypal, and in a location near some of the world's biggest and most well-known venture capital firms, Moberly said he knows Bumper wouldn't be where it is today without the connections, resources and support available in his home state.

"None of this would have been possible without the Nebraska startup community believing in me and investing in me on many different levels,” Moberly said. "I am thankful to NMotion, gener8tor, and all the mentors and investors for taking a chance on me and my team.”

This was another story that looked at how COVID-19 had altered the working world in Lincoln.

This is one of the most fascinating ag stories I’ve ever written, and it showed how one shock like COVID-19 can completely disrupt our food supply.

This was just a fun story that showed how one business saw huge demand during the pandemic.

Sign of the times: Card My Yard booms during pandemic in Lincoln

The Burlington Capital Ag-Venture fund has already invested in two startups based at The Combine in Lincoln and is hoping to raise $11 million by the end of the year.

Panhandle physician, his son and family friend identified as those killed in Chadron plane crash

Killed in the crash were Dr. Matthew Bruner, 44, his oldest son, Noah Bruner, 21, and Sydnee Brester, 19 of Gering.

Small businesses in Lincoln have seen a resurgence of support from the community this year, and that continued on Small Business Saturday. 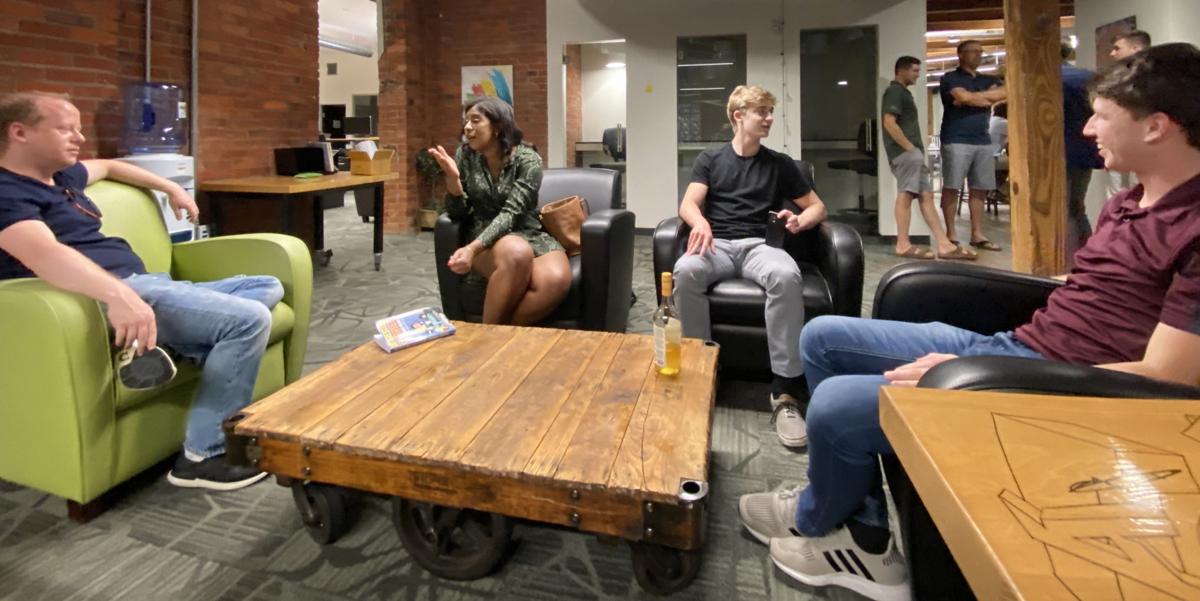 An NMotion mentor, David Sievers (from left) talks with Shanté Lené Frazier of WellCapped and Bumper founder Luke Moberly and employee Harrison Martindale at Lincoln's FUSE Coworking. Moberly began working on an app for high school investors in January and this month secured $500,000 in backing funds. 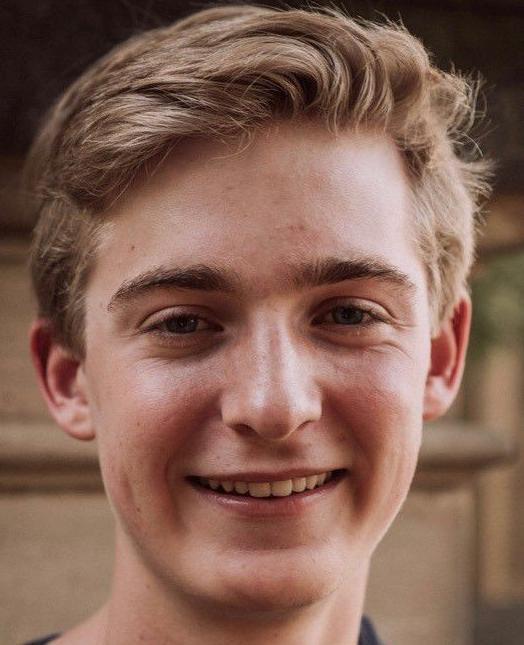 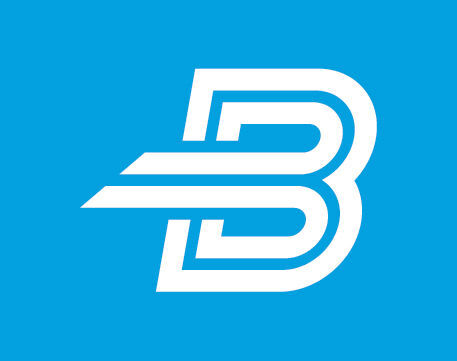 Bumper, an investing app for teens, launched in October.