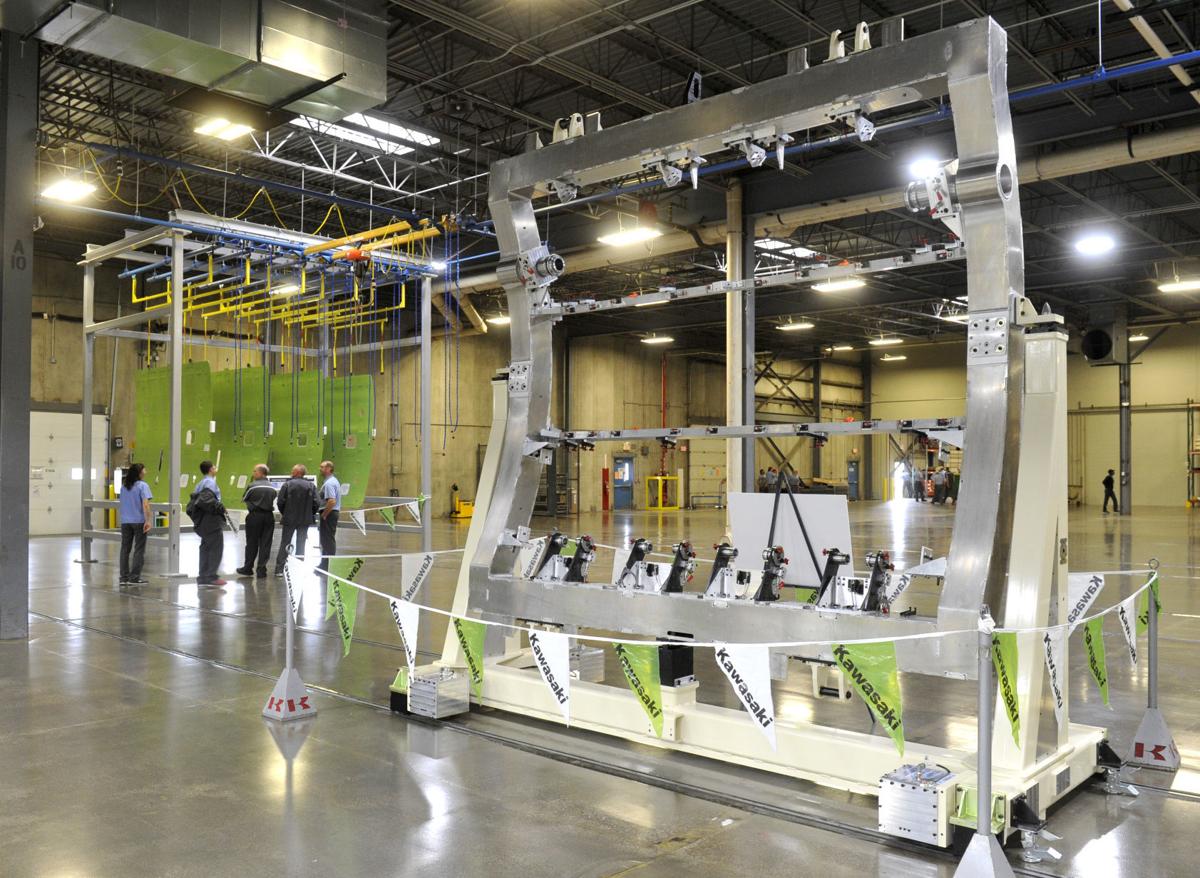 An assembly jig and outer door skins for a Boeing 777X cargo door are roped off during a grand opening of the Aerospace Division at Kawasaki's Lincoln manufacturing plant in 2017. 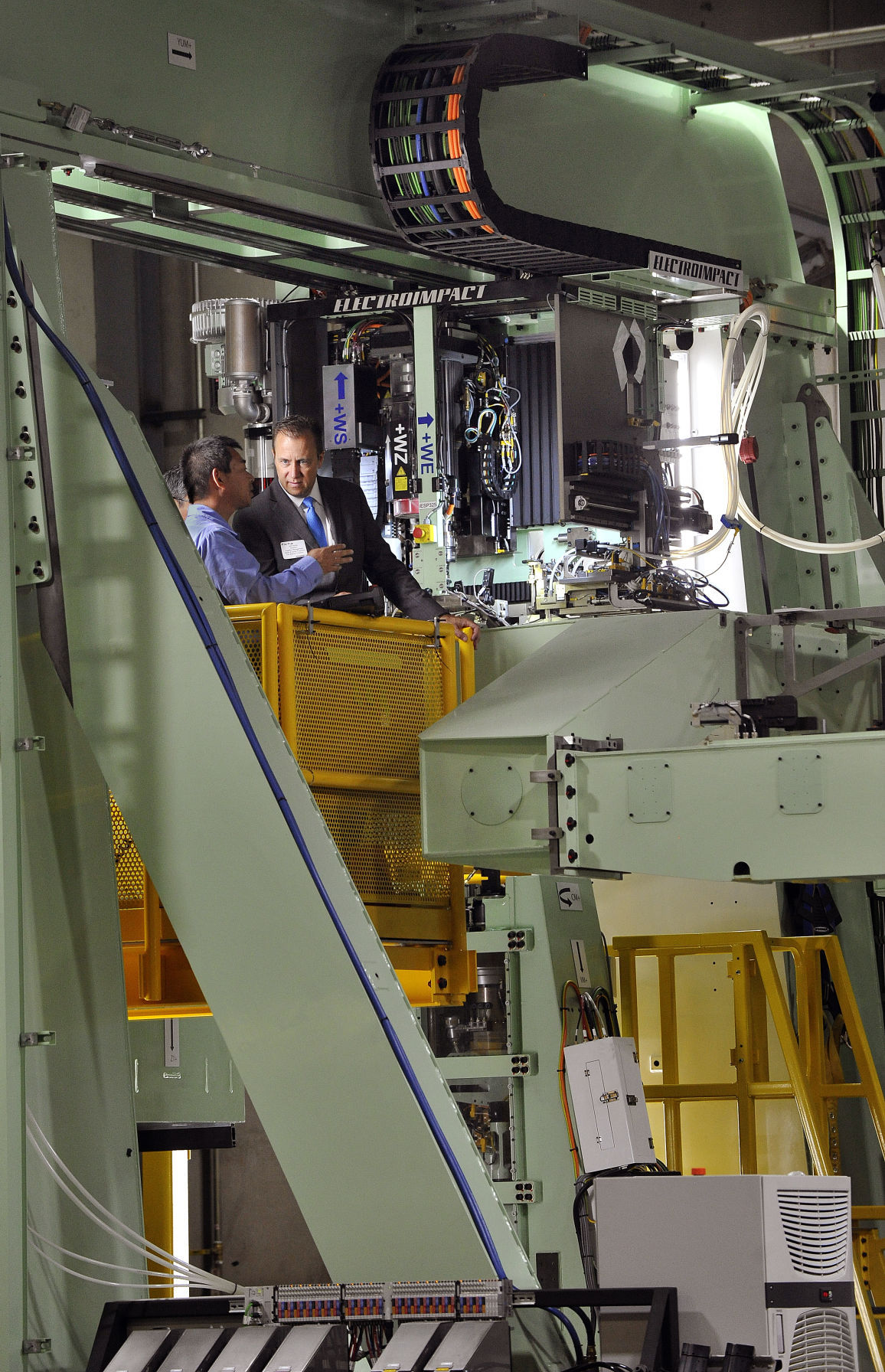 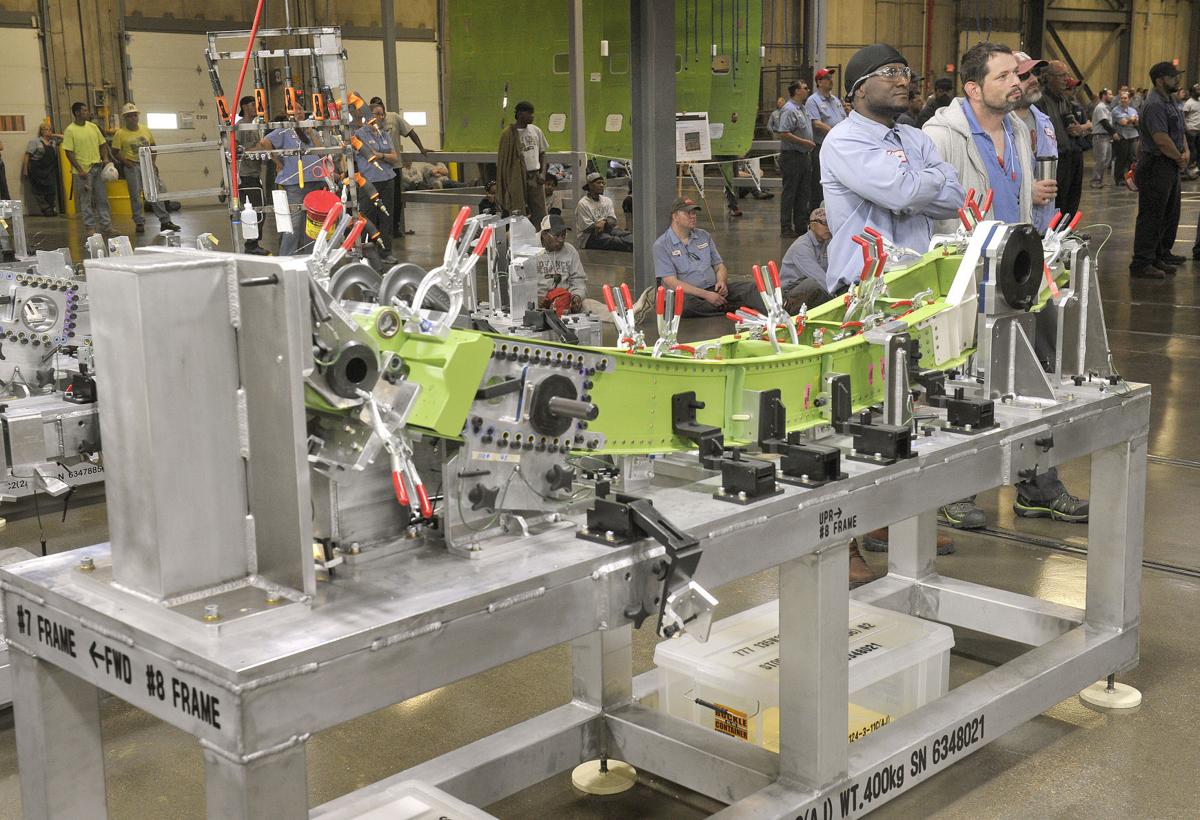 Employees stand near an assembly jig as they listen during a grand opening of the Aerospace Division at Kawasaki's Lincoln manufacturing plant Thursday. 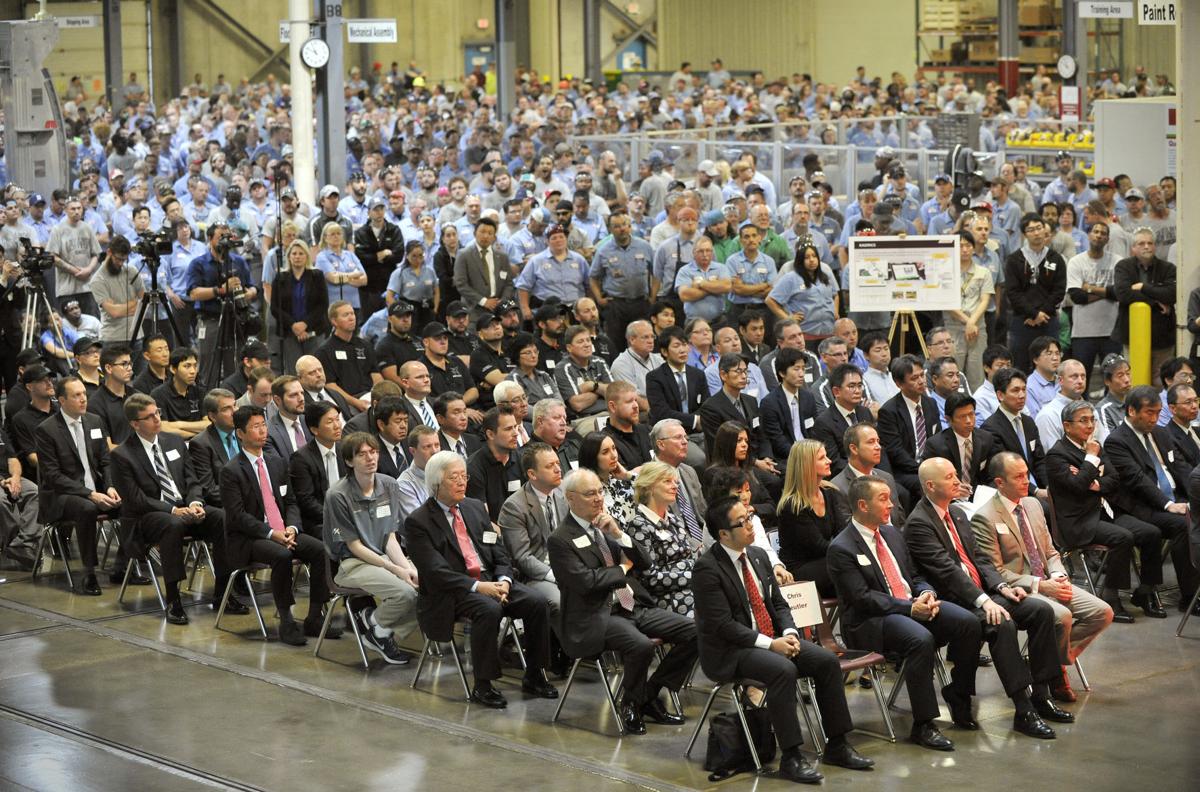 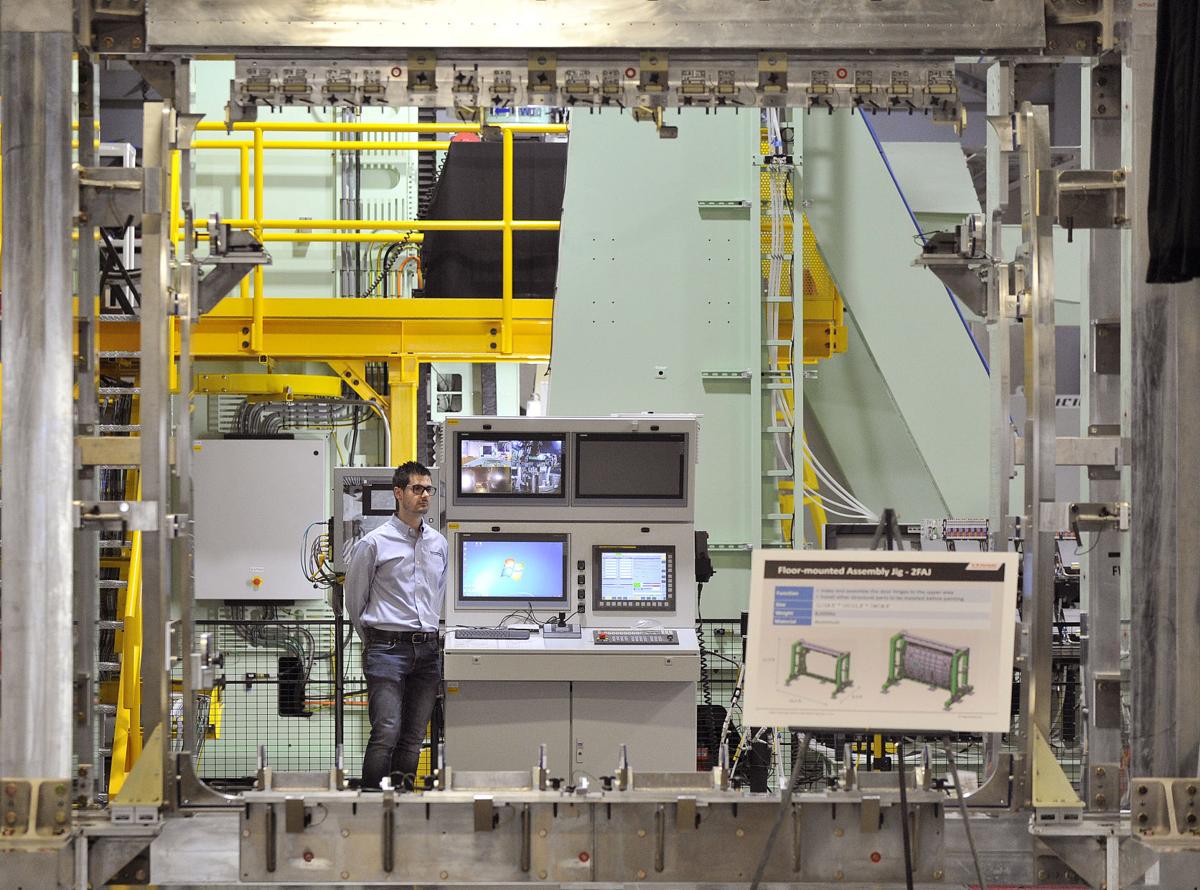 Controls Engineering Manager Paul Haworth is framed by a floor-mounted assembly jig during a grand opening of the Aerospace Division at Kawasaki's Lincoln manufacturing plant Thursday. 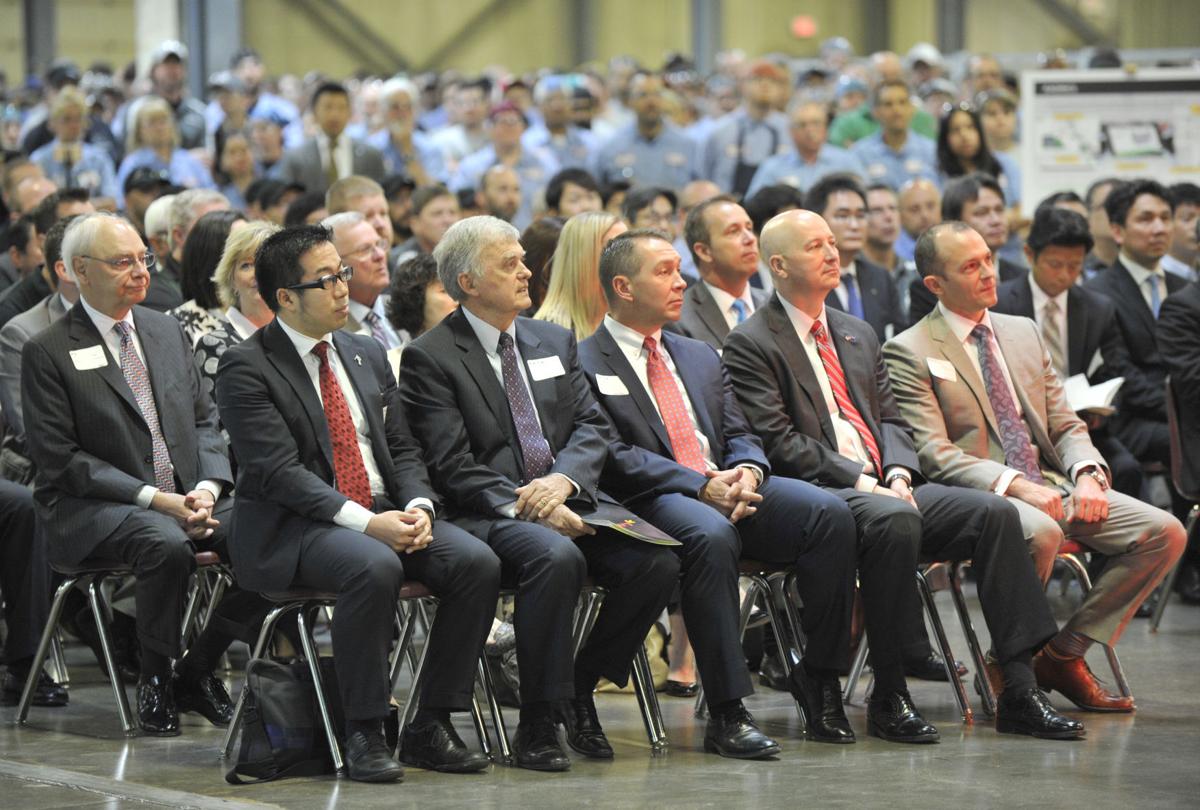 Dignitaries and workers listen to a presentation during the grand opening of the Aerospace Division at Kawasaki's Lincoln manufacturing plant Thursday.

Kawasaki has been a supplier of parts to Boeing airplanes for more than 60 years, but earlier this month started making them in the U.S. for the first time.

On May 1, Kawasaki Motors Manufacturing's new Aerospace Division started work on cargo doors for the new Boeing 777X jet. The division, which is based at the Kawasaki plant in Lincoln, held an official grand opening ceremony Thursday morning.

Kawasaki announced in January 2016 that it would convert part of its plant at 6600 N.W. 27th St. into a manufacturing facility to make cargo doors for the new Boeing jet, adding airplane parts to a plant that already makes train cars, personal watercraft, ATVs and utility vehicles.

The company spent $12.6 million to convert the 30,000-square-foot space. Much of that cost was for machinery to automate the process, although Kawasaki still expects to add about 50 workers to its Lincoln workforce of 2,000 for the Boeing work.

Mike Boyle, vice president and plant manager in Lincoln, said a huge Electroimpact automatic riveting machine will greatly cut down on the time and cost of adding rivets to the doors, able to do the job in about 20 seconds. The manufacturing area also has a robotic painting machine.

Though production began at the beginning of the month, Boyle said the Lincoln plant won't actually ship out any finished cargo doors until January.

Currently, the plant is going through a rigorous qualification program to manufacture cargo doors for the 777X, which is an updated version of Boeing's 777 passenger jet.

Jason Clark, vice president of operations for the 777 and 777X, said the new plane, which can carry more than 400 passengers, is 20 percent more fuel-efficient and has a range of 8,000 miles, which is roughly the distance from Lincoln to Sydney, Australia.

Clark, who attended Thursday's event, called Lincoln "fantastic" and said he was proud that Kawasaki and Lincoln will be involved with making parts for the 777X.

Though the local Kawasaki plant is only slated for the cargo door work, Boyle said he hopes it will lead to additional work in the future.

"We're getting our feet wet right now with Boeing," he said. "We hope if things work out we'll be considered for more."

That's not out of the realm of possibility. Kawasaki Heavy Industries, the parent company of Kawasaki Motors Manufacturing, is a major Boeing supplier and is pushing to become an even bigger one.

Akihiro Shiraishi, director of production for Kawasaki’s aerospace division, told the Seattle Times earlier this month that setting up a U.S. aerospace production facility was one way to differentiate itself from other Boeing suppliers in Japan.

“We wanted to find out what would be the benefit for us if we built in the United States,” Shiraishi told the newspaper. “We thought more business opportunities could be captured if we operate in the U.S.”

If that turns out to be the case, Lincoln is likely to be the beneficiary.

Lincoln has improved in most economic and quality-of-life measurements over the past four years, but still falls short in some categories when…

The stuff Garner Industries makes may not be sexy, but it sure is needed.

Kawasaki to make parts for Boeing at Lincoln plant

Kawasaki has for decades made products in Lincoln for land, sea and rail transportation. Starting next year, the company will add air travel t…

International Propeller Service is pretty much the epitome of a small business. The Lincoln shop has five employees, including owner Bob Finke.

Both the state and local unemployment rates fell in April, according to data released Friday by the Nebraska Department of Labor.

In the early 1960s, most TV viewers tuned into “Route 66” to follow the adventures of the series’ two leading characters.

Kawasaki Motors Manufacturing Corp. has agreed to pay more than $5 million in fines over allegations it failed to report problems with some of…

Nebraska's unemployment rate dropped below 3 percent in May for the first time in more than two years.

Kawasaki is recalling several thousand more vehicles made at its Lincoln plant.

Tax-incentive deal numbers down in 2016

Kawasaki may be in line for $3.2 billion subway contract

The Lincoln Kawasaki plant's chances of landing a huge contract to build New York City-area subway cars got a shot in the arm this week.

Vote paves way for Kawasaki to get largest-ever contract

Kawasaki's Lincoln rail car plant is poised to receive the largest subway car order in its history, the economic effects of which "could be fe…

Kawasaki Motors Manufacturing plans to invest $26 million in its operations in Maryville, Missouri, and add 30 jobs by the end of next year.

If economic development was a boxing match, you'd be hard-pressed to find a better pound-for-pound fighter than Nebraska.

The parent company of Kawasaki Motors Manufacturing reported huge losses in its rail car division — largely because of issues at its U.S. oper…

An assembly jig and outer door skins for a Boeing 777X cargo door are roped off during a grand opening of the Aerospace Division at Kawasaki's Lincoln manufacturing plant in 2017.

Employees stand near an assembly jig as they listen during a grand opening of the Aerospace Division at Kawasaki's Lincoln manufacturing plant Thursday.

Controls Engineering Manager Paul Haworth is framed by a floor-mounted assembly jig during a grand opening of the Aerospace Division at Kawasaki's Lincoln manufacturing plant Thursday.

Dignitaries and workers listen to a presentation during the grand opening of the Aerospace Division at Kawasaki's Lincoln manufacturing plant Thursday.