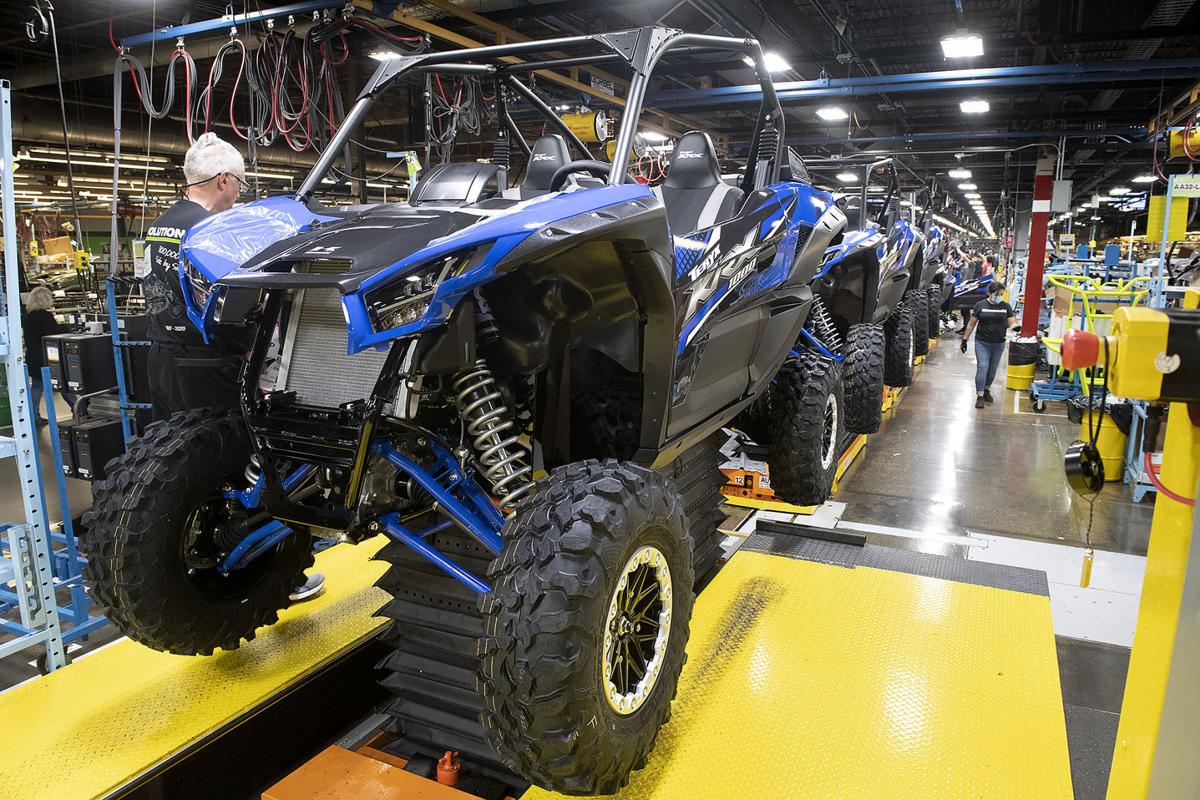 Utility vehicles roll down the assembly line at Kawasaki on Monday. The Lincoln plant announced a $200 million expansion focused on its consumer products division and rail car operations. 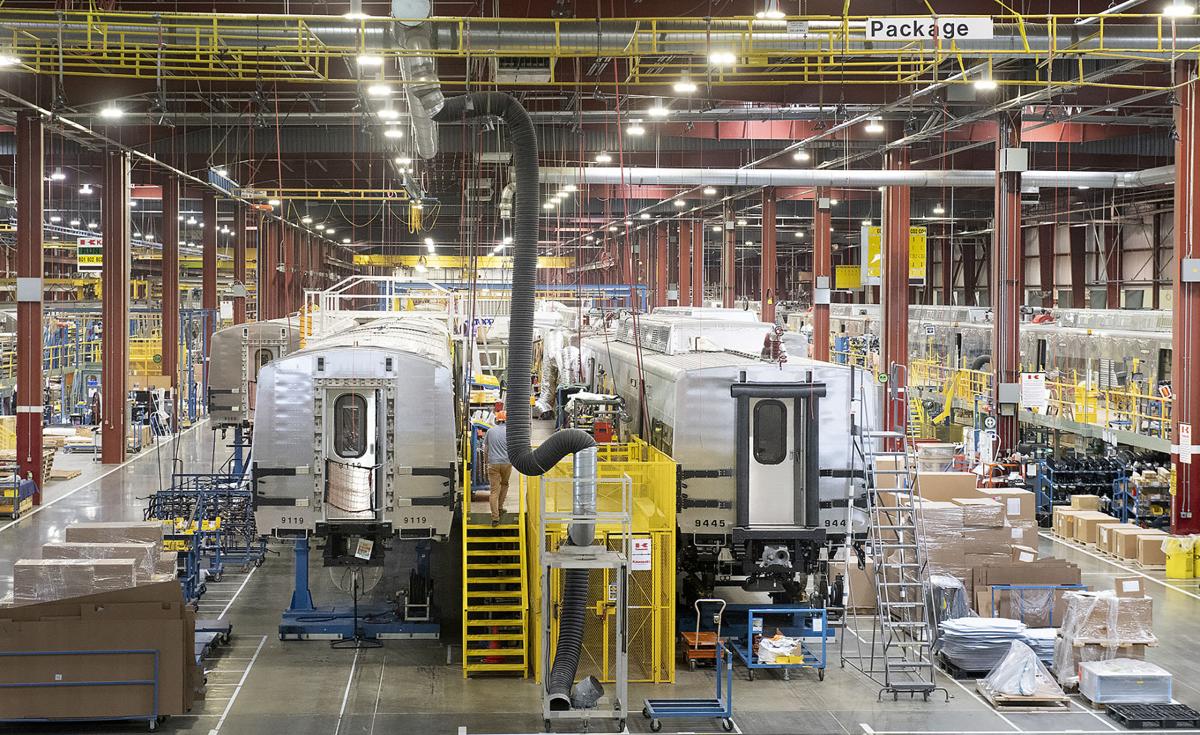 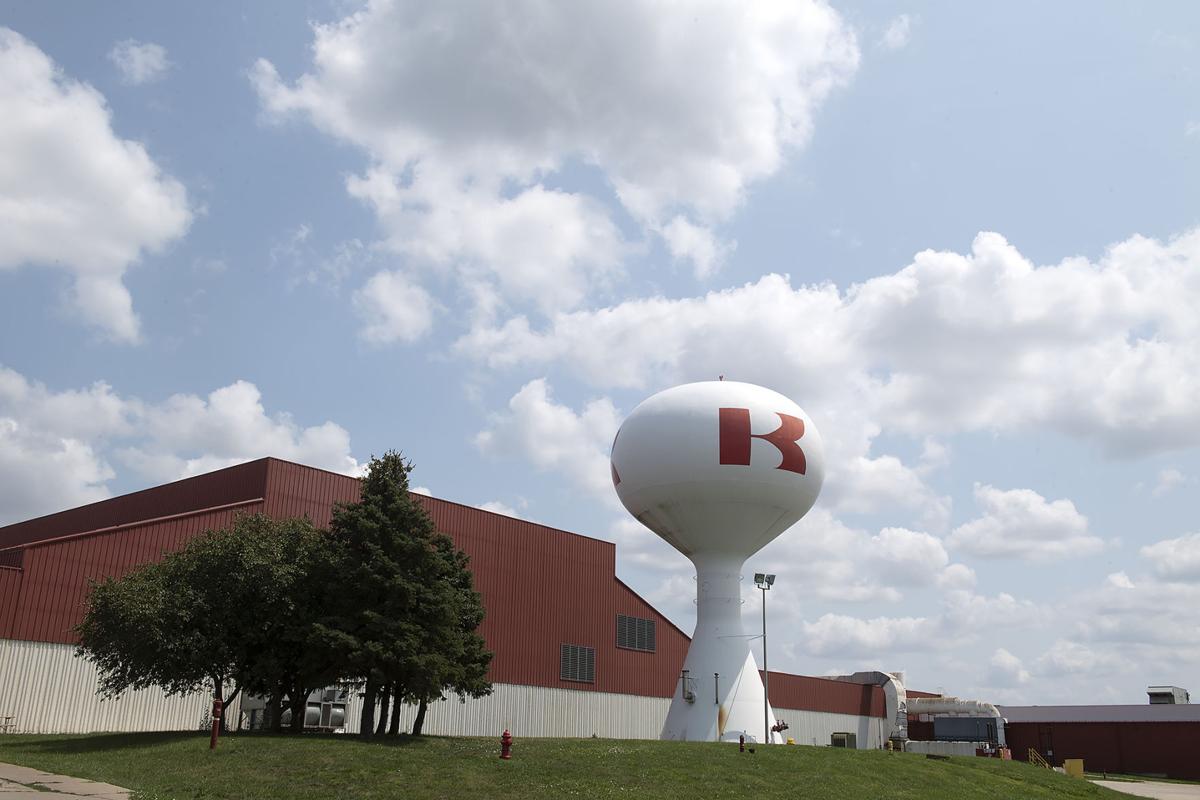 Kawasaki Motors Manufacturing is planning a $200 million expansion of the company's operations in northwest Lincoln.

Kawasaki Motors Manufacturing is planning a $200 million expansion of the company's operations in northwest Lincoln that will result in hundreds of additional jobs.

The company, which is a subsidiary of Japan-based Kawasaki Heavy Industries, said it plans to invest in its consumer products division over the next 18 months to increase capacity to make Jet Skis, ATVs and other small vehicles. The $200 million will be used to add capacity to assembly, paint and welding lines, the company said, as well as increase automation.

Despite the increase in automation, which Kawasaki said is necessary due to the Lincoln area's low unemployment rate, the company said it still plans to add approximately 550 new employees in both its consumer products division and its rail car operations.

"These would include increased sales for consumer products due to the strong economy, a desire to gain market share in the powersports industry, and the startup of the R211 contract for the New York City transit authority," he said.

Kawasaki within the past few weeks delivered the first R211 cars to New York's Metropolitan Transit Authority. The cars — which have larger doors, better lighting and digital displays — are part of a $1.4 billion contract the company secured in 2018, a contract that has the potential to grow to about $3.7 billion if all options are exercised.

Kawasaki has been in Lincoln since 1974, when it opened its only North American manufacturing plant. However, most of its investment in the plant over the past couple of decades has been to support its growing rail car division as well as its new aerospace division, which opened in Lincoln in 2017.

Hellbusch said that to find employees in such a tight labor market, Kawasaki will expand its area of recruitment and beef up its training programs, among other initiatives. He said people interested in applying can go to kawasakilincoln.com to see available positions.

“Kawasaki is a valued employer in the City of Lincoln. We are proud of their success and look forward to partnering with them to connect Lincoln workers to great job opportunities through our Workforce Innovation and Opportunity Act program and our partnership with the Lincoln Manufacturing Council," Mayor Leirion Gaylor Baird said in a statement. "We know that this project will help our workers and our community grow and thrive.”

"For nearly 50 years, Kawasaki has positively impacted the business landscape of Lincoln. This expansion project will play a vital role in our ongoing workforce development efforts, creating hundreds of new jobs for members of our community," said Wendy Birdsall, president of the Lincoln Chamber of Commerce. "I congratulate the entire Kawasaki team on this exciting announcement and applaud their continued success."

Innovation Studio, Kawasaki tool up to fill order for thousands of face shields

"The plan is by noon to be at that 1,500 units-per-day production level," University of Nebraska-Lincoln engineering Professor Shane Farritor said. "We'll do that until the wheels fall off."

Police were called after the 16-year-old boy, who lives near Loren Eiseley Branch Library, saw the child struggling in the water, jumped in and pulled him back to shore.

The first happened near North 70th and Vine streets at 5:30 p.m. and the second at 7:45 p.m. just south of North 27th Street and Cornhusker Highway, Lincoln police say.

Portion of Normal Boulevard to close for utility work

The westbound portion of Normal Boulevard between South 40th and South 48th streets will close on Tuesday for wastewater main repair.

Downtown Lincoln's Sharp Building is on the road to renewal

The City Council on Monday approved the redevelopment plan for the Sharp Building, which has anchored 13th and M streets for nearly a century. The project will use $1.37 million in tax-increment financing.

The center's temporary location will be the Havelock United Methodist Church at 4140 N. 60th St., and it will be open on Mondays, Wednesdays, Thursdays and Fridays from 9 a.m. to 1 p.m.

Lincoln pharmacy veteran swings for the fences with new venture

Lyn Leitner, who sold National Pharmacy in 2017, has opened a new type of compounding pharmacy, the first one in Nebraska.

Zoetis doing another expansion in Lincoln

Whole Foods recalls cheese at stores in Nebraska, 21 other states

The cheese products, which came from the store's specialty market, could be tainted with Listeria.

In Lincoln, the real estate firm CoreLogic reported, 1.9% of mortgages were seriously delinquent in April, more than three times the rate in April 2020.

Lincoln, Nebraska economies appear to be booming. How long can it last?

Unemployment is low and tax revenues are up. But economists say a lack of workers remains a significant hurdle that could hamper economic growth.

The Lincoln-based company needs more workers for the proposed expansion at its plant near Hallam.

The state has thousands of open jobs while unemployment sits at a record low.

Instinct, which has operations at three Lincoln sites, plans to consolidate them all at Southwest 32nd and O streets with a 250,000-square-foot production plant.

DC suspends most of its Metro trains over safety issue

The Metro authority's safety commission ordered the withdrawal of the entire 7000-series line of trains, which are made in Kawasaki's Lincoln plant, early Monday morning.

Seward's Hughes Brothers Inc., which was named the small manufacturer of the year, just celebrated its 100th anniversary last week.

Utility vehicles roll down the assembly line at Kawasaki on Monday. The Lincoln plant announced a $200 million expansion focused on its consumer products division and rail car operations.

Kawasaki Motors Manufacturing is planning a $200 million expansion of the company's operations in northwest Lincoln.