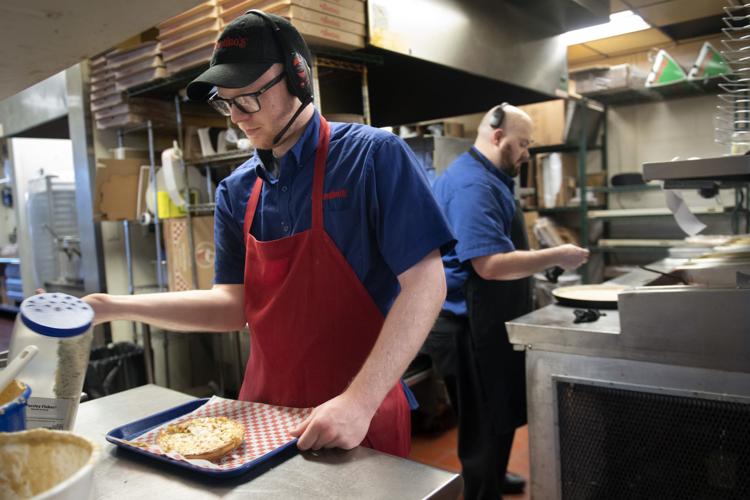 Cody Fuller, manager of Valentino's, works in the kitchen at Westgate Shopping Center. 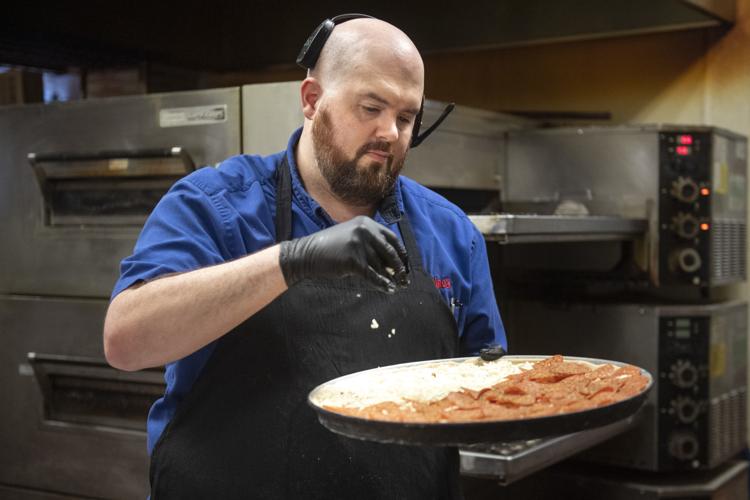 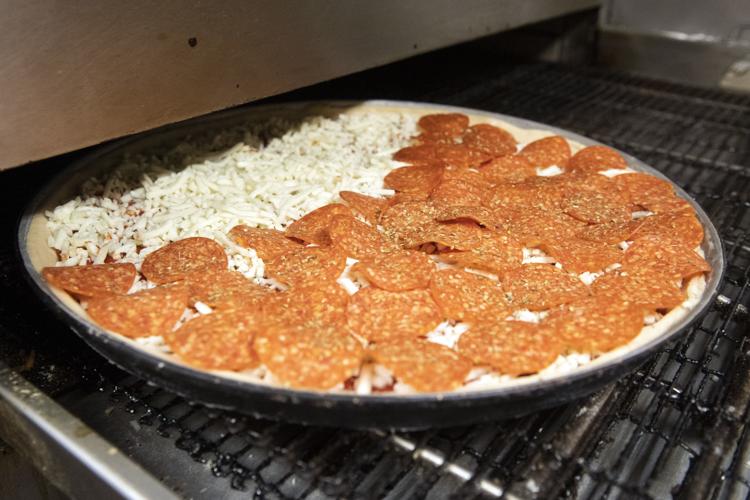 A pizza is being baked at Valentino's at Westgate Shopping Center.

Nate Paulsen has been the general manager of the Valentino's near the intersection of West O Street and Capitol Beach Boulevard for six years.

But his career in the business actually started 20 years ago, when he was a 17-year-old in high school.

"I was looking for a job and my sister was a supervisor at the 33rd and A location and she set up an interview for me," he said. "I wasn't even really interviewed since my sister worked there. We like to hire family members all the time."

Even though it does have a corporate office, Paulsen said Valentino's still feels like a family business.

"Everyone as far as the owner goes, almost his entire family works in the corporate office," Paulsen said. "Even Tony started in the kitchen and grew from there."

That would be Tony Messineo, vice president of Valentino's, who opened the West O Street and Capitol Beach Boulevard location in 1996 to serve the people in a growing part of town. Messineo said the people living in northwest Lincoln have been loyal customers.

Even with the current health conditions that limit gatherings to 10 or fewer and have caused havoc to the restaurant industry, Valentino's continues serving taking orders for take-out.

Paulsen hopes the conditions soon improve and when it does, he believes the building of the new Kinetic Sports Complex nearby will help bring in more customers.

"The area doesn't change a whole lot," he said. "So the addition of this new sports complex could be really helpful in bringing in new business."

Scott Dunlap, manager of the Schmick's Market in the Westgate Shopping Center, has similar hopes.

Dunlap, who has been a manager of the West O location for the past four years, says the west end of Lincoln has been slow to develop.

"Most businesses in this area have been around for five to 10 years," he said. "It'll be really interesting to see what transpires on this end of town when the new sports complex goes in."

Dunlap has worked for the family-owned grocery store and meat market since opening in Lincoln in 2014. Much like Paulsen, he started working in the grocery store industry when he was in high school, and has worked in the industry for the last 35 years.

Of those 35 years, Dunlap has worked solely at family-owned grocery stores.

"They may not have all the bells and whistles," he said. "But they have your bread, eggs and milk."

Cody Schmick, co-owner of the family-owned grocery store, said the addition of businesses nearby has helped. One of those businesses is Glenn's True Value, which is located right next to Schmick's Market in the Westgate Shopping Center.

33rd and Pioneers shop owners reflect on decades in business

The hardware store opened its West O location three years ago. Owner Steve Glenn said he was drawn to open a location on West O because of the continued growth of surrounding neighborhoods.

"We're in the convenience business and we wanted to give the people over here a convenient place to shop," Glenn said.

Glenn said the West O and Capitol Beach location carries things that his other stores don't.

"We had no idea we would carry boating supplies for the boaters in the area," he said. "We get business that doesn't exist at the other stores because of it."

Those specialty items, he said, are part of what keeps customers coming back.

Glenn said he hopes to bring in even more customers with the growth of businesses in the area.

"The area has recently started growing and that's a huge benefit to us and other businesses around us," he said. "We love being in this area and want to be good neighbors to future businesses and stay sensitive to our customers."

Executive Travel is offering a free tree to each one of its customers who purchases an airline ticket. The goal is to help offset the airline industry's carbon footprint.

Cody Fuller, manager of Valentino's, works in the kitchen at Westgate Shopping Center.

A pizza is being baked at Valentino's at Westgate Shopping Center.