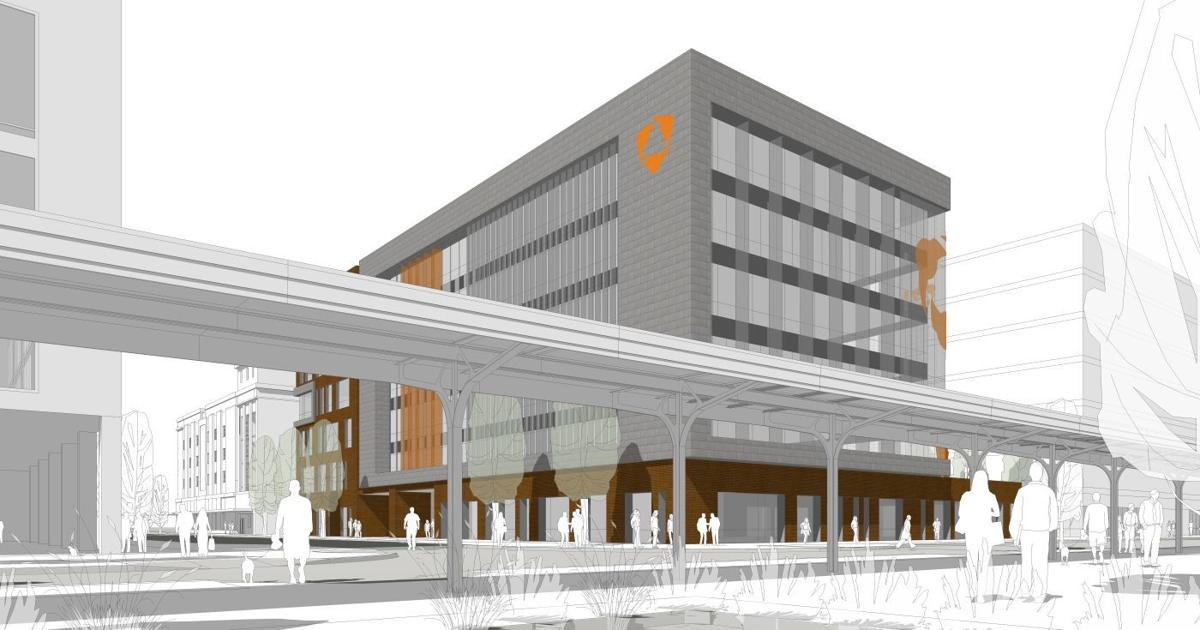 This rendering shows Hudl's proposed new corporate headquarters at Canopy and Q streets from the southeast. 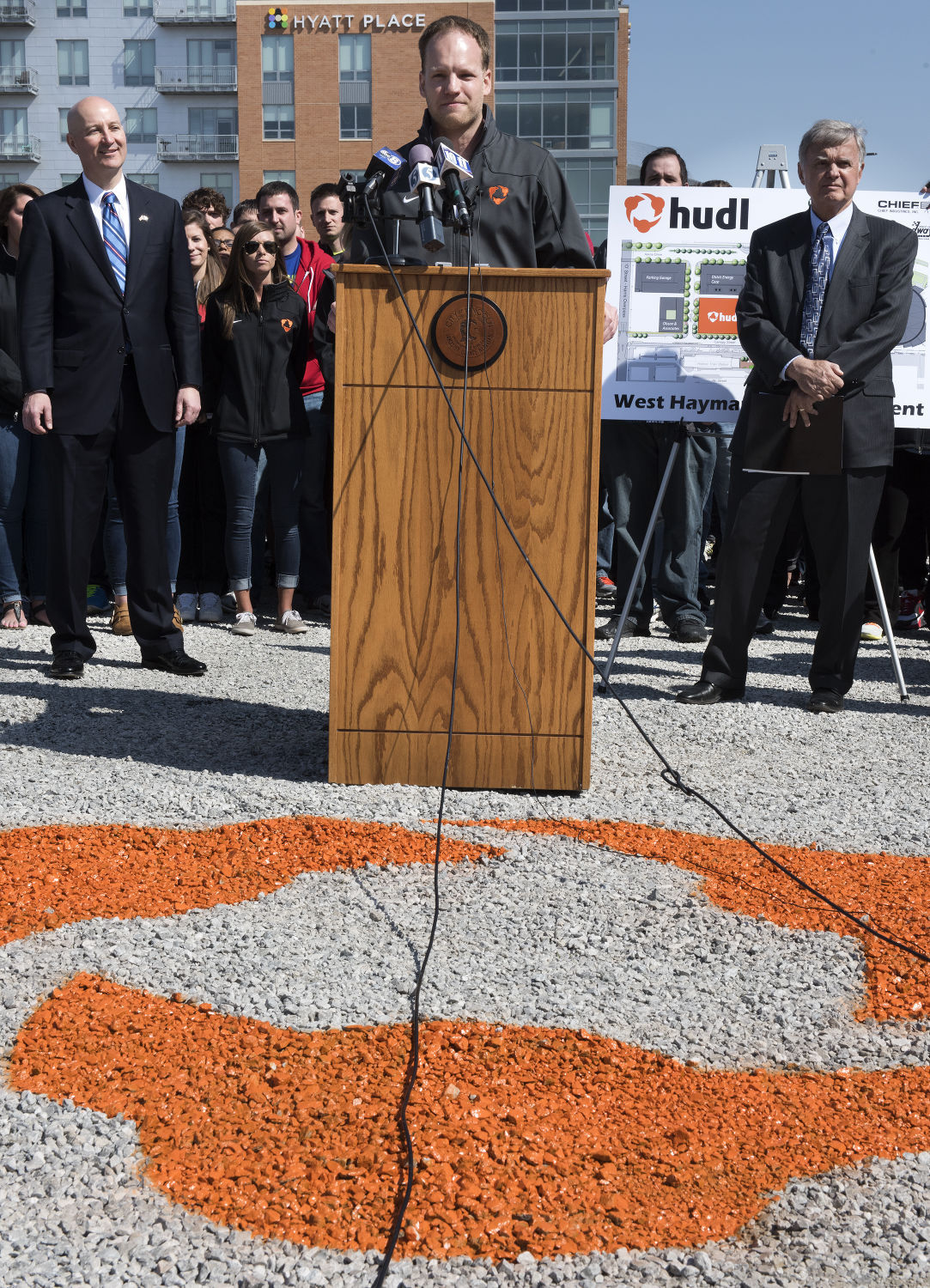 Hudl employees (in background) and state and local officials joined CEO David Graff in April to announce plans to build a new headquarters for the fast-growing technology firm at Canopy and P streets in the West Haymarket.

Hudl's new corporate headquarters will be one of the largest office buildings constructed in the downtown area in years.

The sports video editing software company, which in less than a decade has grown from a three-person startup to nearly 300 employees and $30 million a year in sales, plans a seven-story, 110-foot-tall building at Canopy and P streets in the West Haymarket.

That makes it the second-largest office building by square footage constructed in the downtown area in at least the past decade, surpassed only by Assurity Life Insurance Co.'s new headquarters at 21st and Q streets.

Hudl announced plans for the new corporate headquarters at a news conference in April but disclosed few details at the time.

The $25 million building will have about 150,000 to 160,000 square feet of space overall, with about 140,000 of it office and meeting space for Hudl and Nelnet, which needs additional space to expand its software development team. Nelnet, the student finance company, is one of Hudl's investors.

Hudl CEO David Graff said his company will take about 85,000 square feet of space on the top four floors of the building. Nelnet will take the entire second floor, with the third floor left open for expansion, although it may house short-term tenants, Graff said.

The first floor will have 10,000-15,000 square feet of retail space, and Graff said ideal tenants would be a restaurant and fitness center.

"We would absolutely like to see a fitness center," he said. "It would get a lot of use from Hudl employees."

A fourth-floor skywalk is planned between the building and an adjacent city parking garage to the west. It will provide access for employees working in the building and members of the public wanting to get to the retail spaces on the first floor.

The seventh floor will be only partially enclosed, and Graff said the space will include meeting and play space, with a company cafeteria and game room in the plans. The roof will have a patio and green space, he said.

The project's developers, which in addition to Nelnet and Hudl include WRK LLC, Chief Industries and Speedway Properties, are seeking a special permit to accommodate the height of the building.

The zoning in the Haymarket and West Haymarket areas doesn't allow buildings higher than 75 feet in many areas, although Pinnacle Bank Arena and some of the buildings around it are taller.

In a letter to the Planning Department, Tom Huston, an attorney for the developers, said the 110-foot height fits in well because buildings to the north are taller and buildings to the south are shorter.

Construction is scheduled to start in August, and Graff said it's expected to take about two years to complete, allowing Hudl to move there in the fall of 2017, if all goes as planned.

The north half of the block will remain open and available to accommodate future growth, said Will Scott, one of the owners of WRK.

Hudl, which Graff started along with Brian Kaiser and John Wirtz while they were students at the University of Nebraska-Lincoln, is in massive growth mode.

It has been named the fastest-growing private company in Nebraska the past two years, with annual sales now topping $30 million a year. It also has acquired two competitors in the past year and is in the process of acquiring another company.

The company has grown to 275 full-time employees, 170 of whom work in Lincoln, plus dozens of interns.

Right now, Hudl has a combined 27,000 square feet of office space in two buildings in the Haymarket.

The company just completed a renovation of one of the spaces and is renovating the other one to squeeze in as many employees as it can to accommodate continued growth before it can move into its new building.

Graff said the new building will have space for about 750 employees, which should be adequate for at least a few years.

Hudl, flush with a $72.5 million investment earlier this year that's believed to be the largest-ever for a Nebraska-based technology company, plans to beef up its product team and sales and customer relations staffs and is expecting to add as many as 300 new employees over the next three years.

Though the company could build a larger building with more room to expand elsewhere in downtown or even somewhere else in the city, Graff said, the company is bullish on the Haymarket and all the things going on there.

Americans not being ‘paid to stay home’ -Biden

What the Colonial Pipeline Hack Means for Fuel Supplies

What the Colonial Pipeline Hack Means for Fuel Supplies

Cory Scott left a career at Duncan Aviation to pursue his own thing.

First State Bank Nebraska, which is based in Lincoln and operates throughout southeast Nebraska, is planning a new headquarters in south Lincoln.

Lincoln residents will be among the first in the U.S. to be able to buy the Apple Watch.

Hudl made the "Super Bowl" of business expansion announcements Thursday.

Hudl, the Lincoln sports video-editing software firm that seems to be in constant expansion mode, is making another acquisition.

This rendering shows Hudl's proposed new corporate headquarters at Canopy and Q streets from the southeast.

Hudl employees (in background) and state and local officials joined CEO David Graff in April to announce plans to build a new headquarters for the fast-growing technology firm at Canopy and P streets in the West Haymarket.