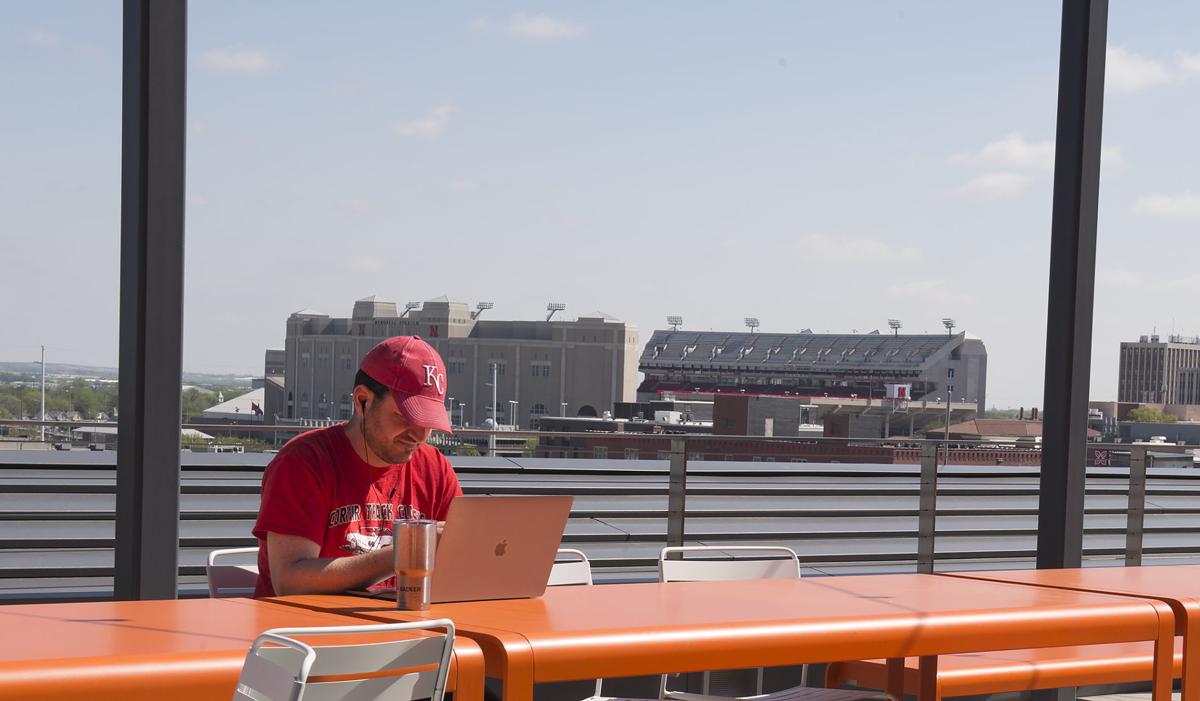 Armen Badeer, a Hudl product director, takes advantage of a nice day to work outside on the company's seventh-floor deck with a view of Memorial Stadium. Hudl employees have no desk to call home. 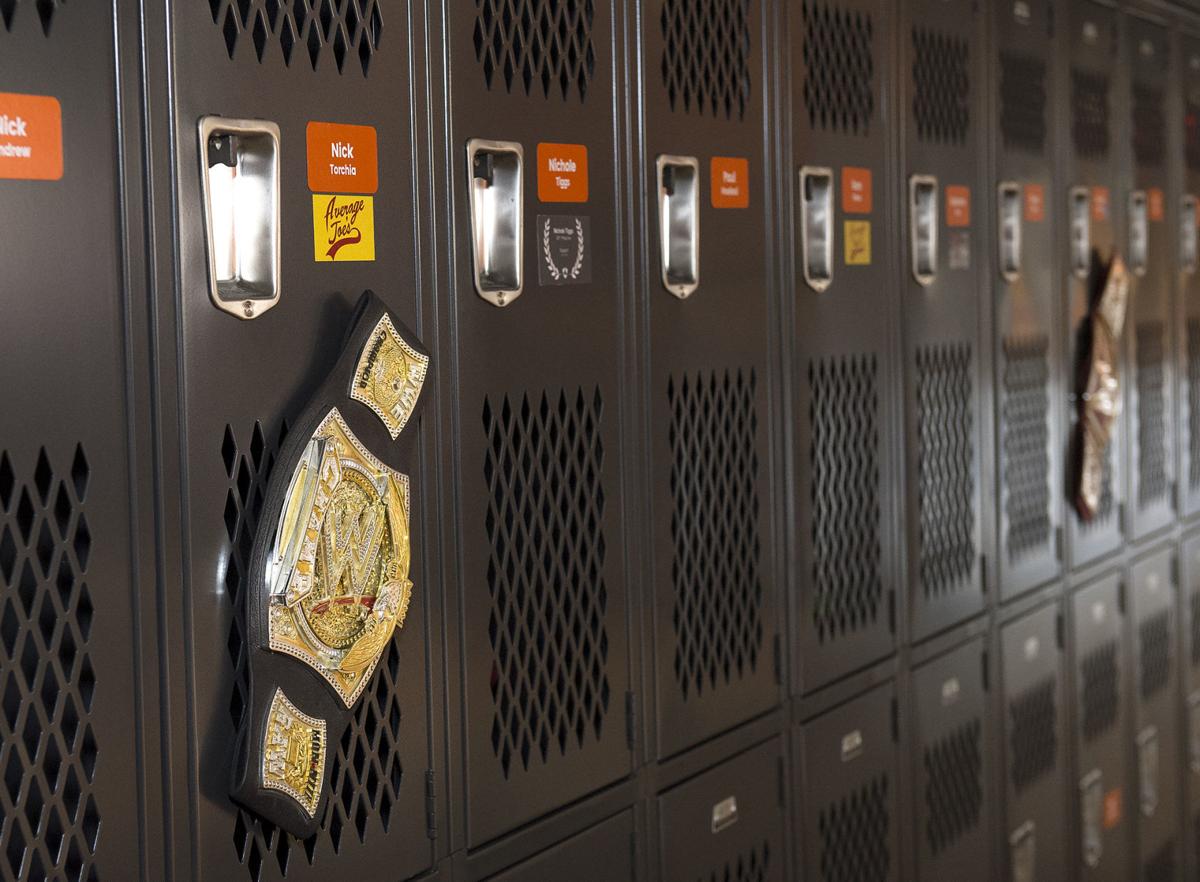 Employee lockers are personalized with magnets at Hudl, which embraced activity based working in its new Lincoln headquarters. 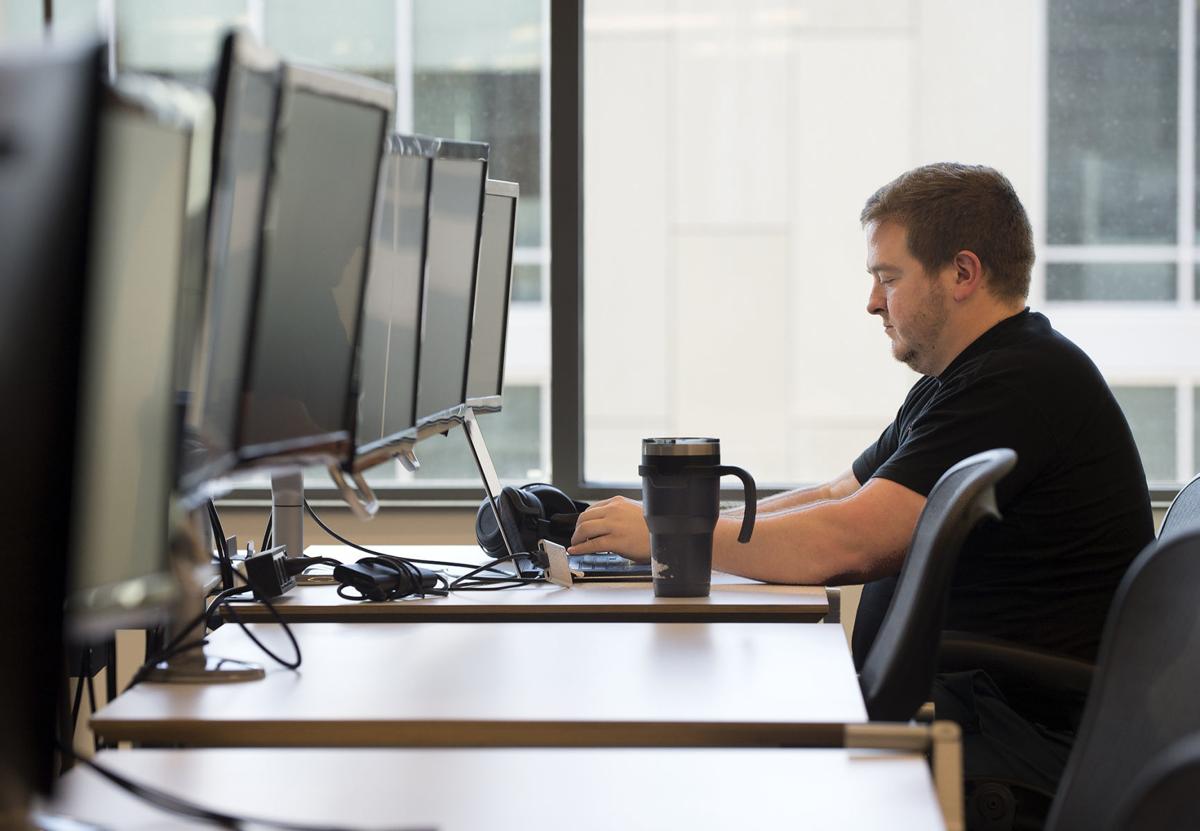 Eric Reznicek, a data analyst for Hudl, to choose his workspace. Here, he employees a desk with adjustable monitors. 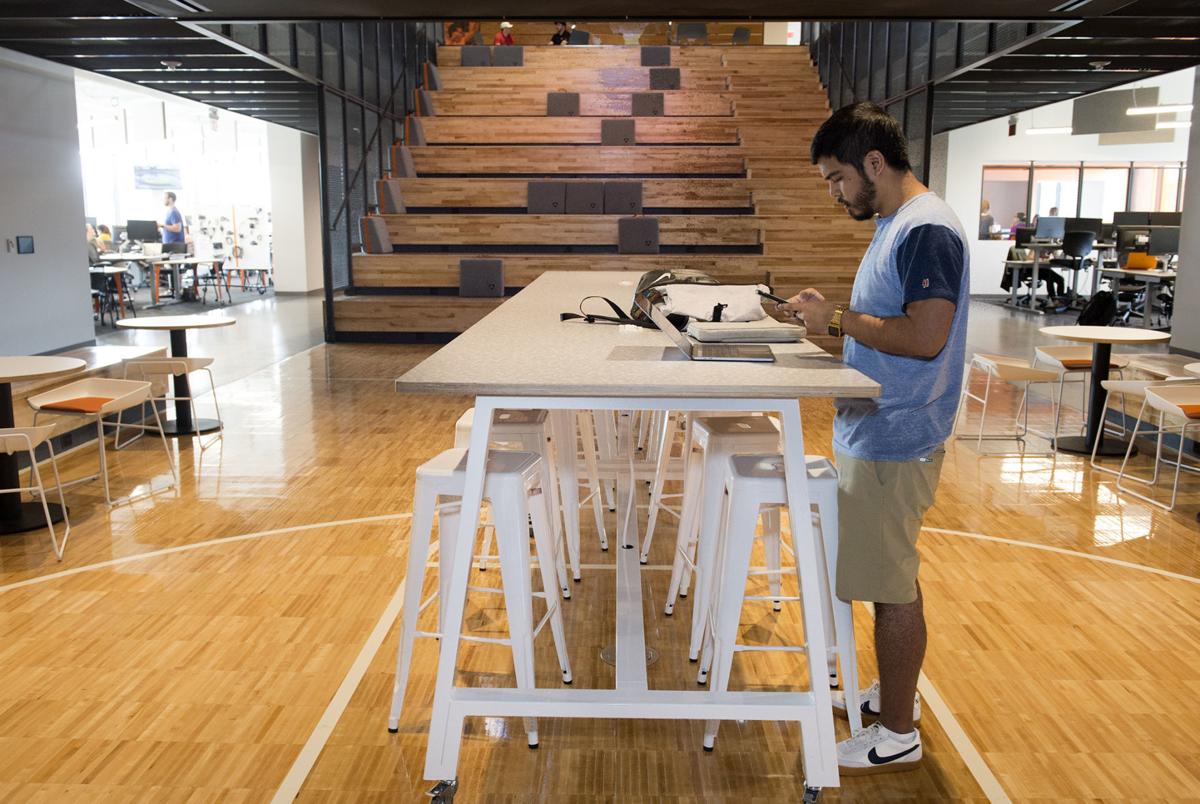 Hudl employee Derek Hernandez works at a tall table in the arena space. Hudl's new building incorporated activity based working, where employees choose from a variety of workspaces rather than an assigned desk. 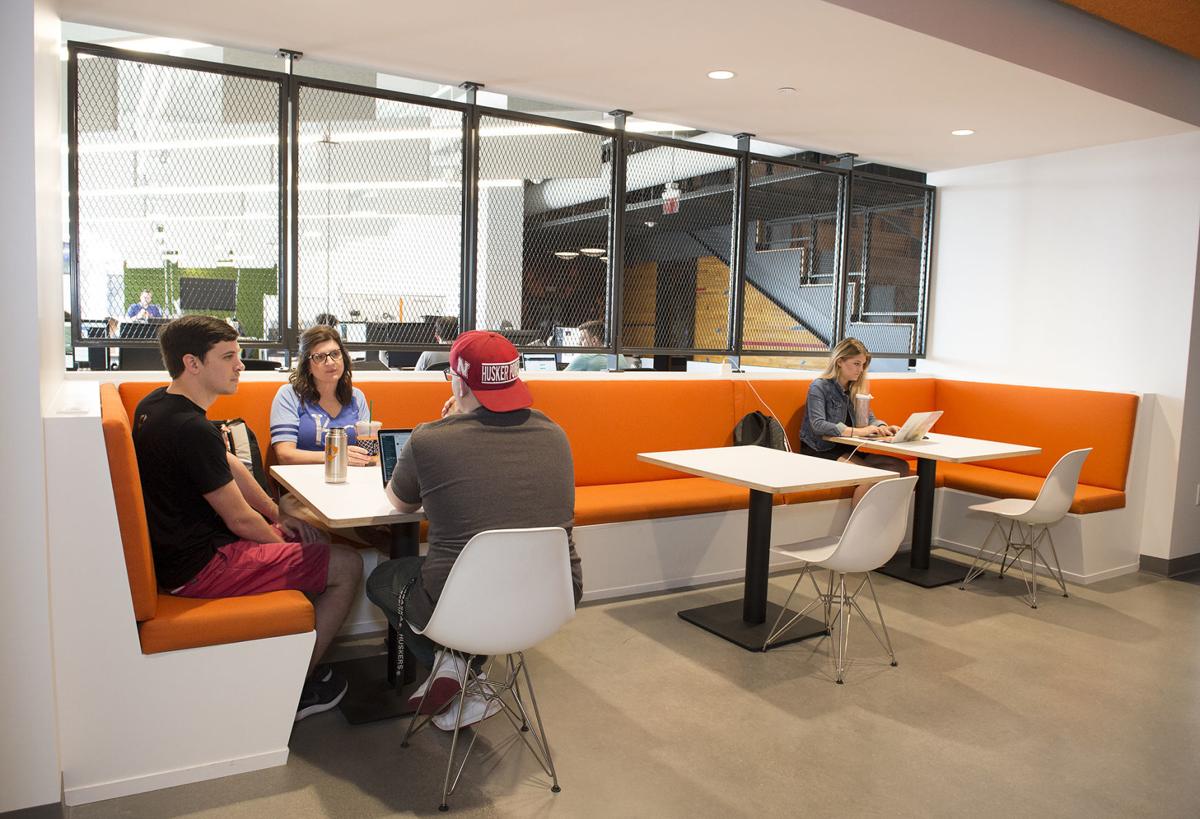 New additions to the workforce bring a different perspective to the job, many business owners say. In this photo, Lincoln-based Hudl has embraced change by creates spaces in its new headquarters where employees can gather to collaborate. 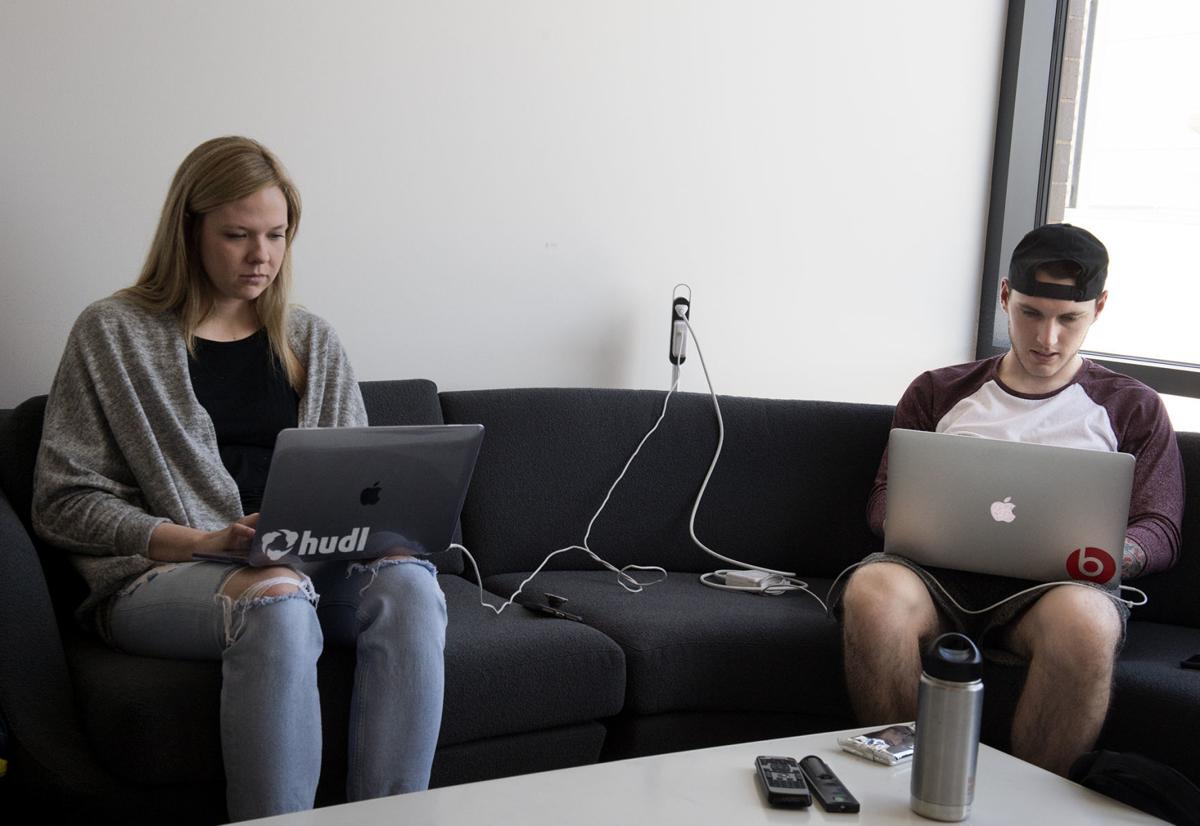 Like other Hudl employees, Gabe Buglewicz is a nomad.

On Wednesday the architect started her day in the top floor sports lounge, with her water bottle and laptop, talking over plans for the workday with a few team members.

During the day she moved around, pulling out her laptop while working in a booth on the fourth floor, then again while settled into a comfortable lounge chair on that level. Later she headed to the airport and a work trip to London.

Hudl employees do not have a specific, assigned desk, with family pictures organized in one corner, a stack of files next to the phone and a toothbrush in the desk drawer.

Instead, everyone has a locker for those personal items they don’t want to drag around all day and a choice of decks, chairs, couches, pods, tables, booths, meeting rooms and private spaces on three floors of Hudl's new headquarters in the West Haymarket.

Hudl experimented with what is called activity based working, or ABW, with about 60 employees in their old offices above Scooter's Coffee in the Haymarket before deciding to design their new building with no assigned workstations.

Activity based working is used at some companies in Europe and Australia, particularly Sydney, and in some larger U.S. cities. But there are no other companies in the Midwest using that model, at least that Hudl staff know about.

Activity based working gives Hudl’s employees the freedom and flexibility to work where they can be most efficient and provides the company greater flexibility to grow and evolve in its new building, said Jeff Scott, a Hudl architect.

Sometimes companies look at activity based working as a way to save space, with fewer desks. But that is not how Hudl approached the concept, said Scott, who designed the Lincoln headquarters at 600 P St.

“We wanted to create different working environments so people can be the most comfortable and productive,” Scott said.

Hudl, which provides services that allow athletes and coaches to edit and share video and interact with statistics, already had a tech-savvy workforce equipped with modern tools — laptop computers and cellphones. So they didn’t need a landline phone and a wired desktop computer to get their work done.

The company also has a young college-educated staff accustomed to carrying around a laptop computer to use at the university library, at their apartment, or in a coffee shop down the street.

So Hudl has no landline phones and fewer than 10 desktop computers in its Lincoln headquarters. And those desktop models will all eventually be transitioned to laptops, Scott said.

Lincoln's Hudl office, with more than 350 employees plus 100 summer interns working on three floors, has a robust Wi-Fi system and electric outlets installed everywhere — at desks, lounge areas, in the bleacher seating built into the gymnasium space where staff gather for large meetings, and in the courtyard on the seventh floor roof deck with its grand view of Memorial Stadium and the Capitol.

People can plug in their laptop just about anywhere in the building and can talk on a mobile phone or through their laptop computer with a headset.

Everyone has a backback for their laptop and essentials. Some employees, like Gabrielle Kuhl, part of the sales staff, has one mobile phone with two separate lines, one for work and one for personal use.

There are plenty of desks throughout the building, each with two monitors that can be raised and lowered and chairs that can be adjusted, so an employee can be short or tall, can stand or sit and be comfortable and ergonomically correct.

Though no one has an assigned desk, teams do tend to congregate in the building, and there are areas set aside for each of the four "neighborhoods" — product, sales, support and operations.

In some areas, equipment hanging from the ceiling produces a white noise that dulls the conversational noise. In some areas there is a dropped ceiling to keep noise down. There are small rooms for private phone conversations, a kind of modern phone booth where you bring your own phone. And there are meeting rooms of varying sizes, all named after an athlete.

You can find pens and paper in desk drawers throughout the office space. But coffee is available in only one spot — on the seventh floor. That means people must leave their current work area and walk, sometimes a fairly long distance. This is by design, because walking is healthy for the person and because taking a little break and maybe meeting new people is healthy for the company.

Although they have no desks to call their own, employees are still finding ways to personalize areas, specifically their lockers, with specially designed magnets.

Dana Nielsen, a recruiter for Hudl, was in the group that tested activity based working in the company's old offices. She was a bit leery at first. After all, she often had stacks of candidate resumes on her desk. "What would I do with my stuff?"

What Nielsen found is that “if it is not on my computer or phone, I don’t need it.” She uploads all those resumes.

And she found that by moving around, working in different areas, she learns things that are helpful in recruiting. Since January, Nielsen has hired about 100 sales reps, and she finds herself working in the sales area most days.

She better understands what a typical day is like for a sales rep. She’s overheard the coaching that goes on as sales managers give advice when a representative gets off the phone.

Many in the support staff were worried that they would lose the camaraderie of their close-knit group if they didn’t have adjacent assigned desks, said Kevin Gunter, a support specialist.

But that didn’t happen, he said. Members of the support staff still work together. They often sit together. Last week a half dozen of the support staff were working on the outdoor patio, taking calls from coaches while enjoying the first great days of spring, he said. And Gunter said he has met people he doesn’t work with directly and learned more about Hudl and its products.

Eric Reznicek, a data analyst, is a creature of habit. He liked having his own space, his own screens, a little area that no one else touched. He had knickknacks on his desk — a miniature model sailboat, some rubber ducks that were given out as a welcome gift to team members.

So Reznicek had a period of adjustment when he moved into the new building. But he’s merged his need for routine with the new flexibility and has picked three favorite work areas.

In the morning he heads to the seventh floor for coffee and a chair or couch in the massive sports lounge to “get the day started off on the right foot.”

When that area starts to get busy, he moves down a few floors, where it’s quieter. He often sits at a desk near a window or in a quiet pod, where he can hammer something out.

And if he really needs to focus, he picks out a traditional work area, a desk with dual monitors and a chair with a back, “which is really, really nice,” he said.

He keeps nothing in his locker. He brings a coffee cup with a lid and keeps everything he might need in his backpack.

“I’m definitely a full nomad at this point.”

A couple of years ago, Lincoln wasn't even on the radar of Glint, a Silicon Valley-area tech company.

Gateway Mall has announced its second "Battle of the Pop-Up" contest winner.

It appears the lack of inventory, rising prices and rising mortgage rates may have finally caught up with the Lincoln real estate market.

The U.S. Department of Labor filed a complaint in federal court Wednesday alleging a family-owned Mexican restaurant chain with a location in …

On his way to work at Hudl headquarters, John Prauner often reads a book on his Kindle, something he has little time for when he's at home wit…

Hudl, founded in Lincoln as a startup, moving 350 employees into its new HQ

Hudl's Lincoln employees will be moving into their new digs Monday, and it won't be long before the rest of the company pays them a visit.

You may be seeing a few more Hudl T-shirts around downtown this week than usual.

Nebraska ranks fairly high among Heartland states when it comes to innovation, according to a report released Tuesday.

Armen Badeer, a Hudl product director, takes advantage of a nice day to work outside on the company's seventh-floor deck with a view of Memorial Stadium. Hudl employees have no desk to call home.

Employee lockers are personalized with magnets at Hudl, which embraced activity based working in its new Lincoln headquarters.

Eric Reznicek, a data analyst for Hudl, to choose his workspace. Here, he employees a desk with adjustable monitors.

Hudl employee Derek Hernandez works at a tall table in the arena space. Hudl's new building incorporated activity based working, where employees choose from a variety of workspaces rather than an assigned desk.

New additions to the workforce bring a different perspective to the job, many business owners say. In this photo, Lincoln-based Hudl has embraced change by creates spaces in its new headquarters where employees can gather to collaborate.