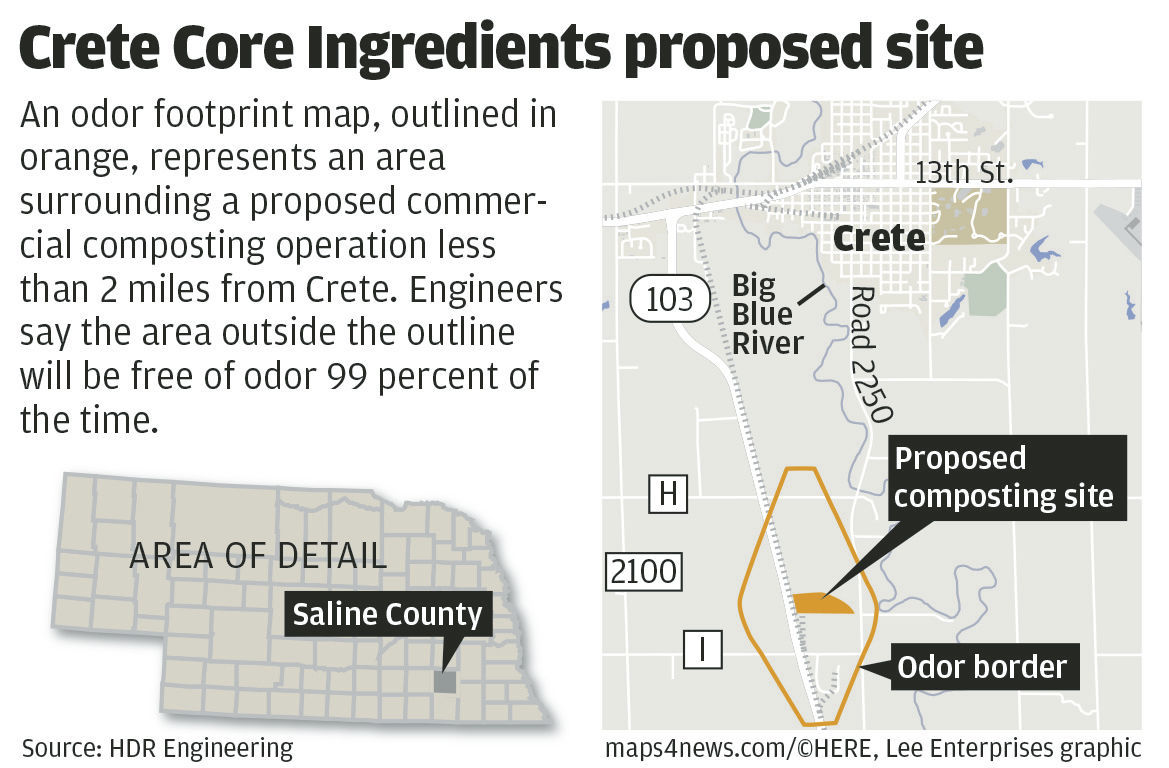 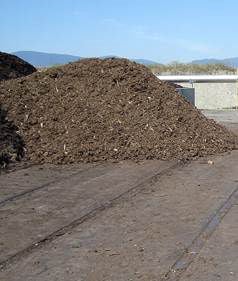 Aeration pipes run under a compost pile at a compost facility in Sedalia, Mo. An Omaha company is looking to build a similar facility in Crete.

A plant near Crete that makes the raw material for pet food manufacturers hopes to begin composting its byproducts instead of sending them to a landfill.

Crete Core Ingredients plans to use about 10 acres north of its plant for the composting operation if it gets permission from the Crete City Council and the state.

The processing plant would mix the remnant bones of animals — chickens, ducks, fish — and sludge from the processing operation, with cardboard that the meat came in and wood chips from company and customer pallets. Using the aerated process, the company will turn that mixture into compost to be used in farming or sold at retail stores.

It would divert two to five trucks a day of company waste from the Milford landfill.

Company officials have not provided any written information about the amount of material that would go into the composting operation, according to state and city leaders.

But it would compost enough material to require a solid waste-processing permit for composting from the Nebraska Department of Environmental Quality.

That means the company would compost at least 1,000 cubic yards of material annually, akin to 23 to 24 10-wheel dump truck loads a year, according to Morgan Leibrandt, an Environmental Quality supervisor.

The company plant is within two miles of Crete city limits and therefore under the city's jurisdiction, so its request will have to go through a multi-step process at the local level before the state considers its permit.

The Crete City Council will begin considering the composting facility at its Tuesday meeting.

Odor has been the biggest concern, said Tom Ourada, city administrator. The state does not regulate odor, so any restrictions would have to be part of the local process, he said.

“Controlling odor, that is paramount,” he said.

The council is asking questions about odor, about controls and the technology the company intends to use, but council members also are supportive of business and industry, Ourada said.

“They want to perform their due diligence so the community doesn’t get a reputation for being smelly and obnoxious,” he said. "Council members have asked for quite a bit of information, which the engineer working for the company has provided.

“We need to be comfortable this is not going to inflict something on the community that we won’t be able to effectively mitigate down the road. We are trying to be cautious in what we are doing moving forward.”

Company leaders say the aerated static pile process the company plans to use for composting can better control odor than the more common wind-row processing.

“It is a very, very sophisticated system,” and one that controls odors better than other composting processes, said Patrick Burke, president of Omaha Industries, which owns Crete Core Ingredients.

The company provided an odor footprint map in its application for the special permit, indicating that current and future residential zoning districts are beyond the area where there might be an annoying odor.

In August, the city’s planning commission advanced the zoning request to the City Council on a 3-2 vote, with just five of the nine commission members present at the meeting.

Dave Hansen, chair of the planning commission, who voted against the zoning change, has concerns about odor, particularly since the operation will be close to Crete.

Hansen says he is comfortable with the technology and the equipment. But he isn’t convinced the company will be able to control the odors.

Under more-traditional wind-row composing technique, piles are turned to aerate them.

With aerated static pile composing, oxygen is pumped into or pulled out of the compost piles using technology that can speed up and better control the process, Burke said.

The equipment would include a variety of sensors that allow the company to reverse the pumping, pulling air out of the compost pile, creating a vacuum, which reduces the emission of odor, he said. The air is then taken through a bio-filter to remove odor, said Burke.

The entire process takes several months, 28 days for the composting, then another six to eight weeks for curing, he said in an interview.

Crete Core Ingredients is the one of the largest suppliers in the nation of certified-organic raw material for pet food, he said, and the composting operation is an "effort to strive to try to be green, organic and eco-friendly."

“We are a company that takes the environment serious,” Burke said.

The composting facility would be regulated by the state, for human health and environmental issues. The company will have to tell the state how the facility is going to be constructed, how it will keep stormwater and other liquids from flowing off-site, what equipment it will use and how it will compost, said Leibrandt.

The state, which inspects sites annually, requires commercial composting operations to take steps to prevent runoff and mitigate flies and rodents. Each site must also have a plan and money set aside in case it is forced to close prematurely.

But the Department of Environmental Quality does not control for odors.

“That doesn’t mean we don’t investigate odor complaints,” Leibrandt said. "Sometimes odor is an indication of mismanagement of waste. Perhaps there are flies and maggots and piles of things just rotting. The state can regulate that.

“We understand that people have concerns and we do investigate.”

Lancaster County regulates odor at the Prairieland Dairy compost facility, which uses the wind-row process, through rules tied to a special permit.

In Crete, the City Council would need to approve several items before Crete Core Ingredients could apply for its state permit.

Those include: amending a zoning ordinance to allow a commercial composting facility in an industrial-zoned area; approving a special permit to allow the company to operate the facility; and officially approving the facility site.

Odor limits and other specific conditions can be included in the special permit or be part of a separate performance agreement, said Ourada, the city administrator.

The zoning vote could come as soon as Tuesday.

If that change is approved, the council would schedule public hearings on the special permit and siting decision in late October or early November.

'The engine was cutting out' — Denton couple together in plane crash, recovery

New library being built in Crete to include computer lab, storm shelter

Ground has been broken in Crete for a new library building, replacing one that has been located on East 13th Street since 1913.

A 22-year-old Crete woman has been identified as the person who died when her SUV crashed on Interstate 80 early Sunday west of downtown Lincoln.

With rule change rejected by governor, some Nebraska teachers-in-training left in limbo

Anita Schwartz discovered her love of teaching years after she’d earned a bachelor’s degree, so she went back to school to get her teaching ce…

Want to get rid of your decaying pumpkins? Donate for composting on Sunday

A Crete company that makes ingredients for pet food has been fined $100,000 for violations of the Clean Water Act.

Aeration pipes run under a compost pile at a compost facility in Sedalia, Mo. An Omaha company is looking to build a similar facility in Crete.